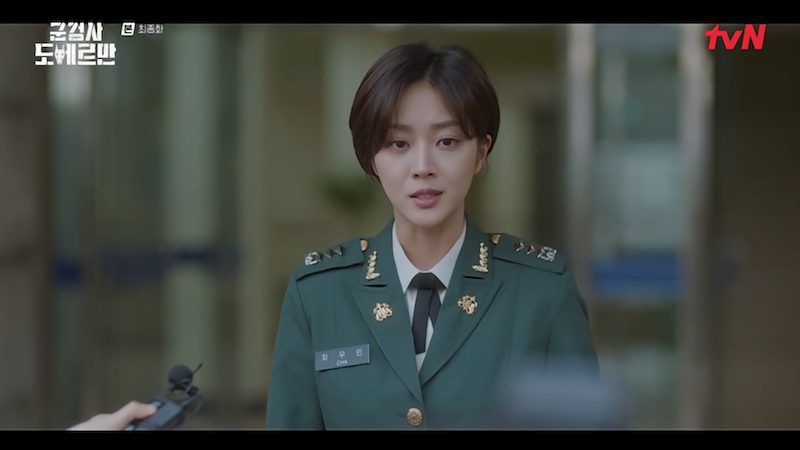 I'm not sure if I have ever seen a smoother redemption arc than No Tae Nam's. Hats off to Kim Woo-suk who was stellar in that role!

It was a relief that Ha Jun didn't really betray Woo In and his bromance with Bae Man was kinda cute. We should have had more of that.

Detective Do in love and wearing pink was the funniest 😂😂. I laughed hard at the dinner scene in her apartment. Her and SJA Seo are definitely a match made in heaven.

The last trials were such a circus with the outbursts and collar grabs. I rolled my eyes a few times.

The last episodes kind of fell flat for me... It was all too easy. I still can't believe No Hwa-Young didn't see Yong Moon's betrayal coming when they had made her out to be such a smart villain. The signs of his impending rebellion had been out in the open for a while, so how did she miss that?
Chief Yang turn around made total sense, it was obvious that the shot at the end of episode 15 wasn't a deadly one. How did we never get a back story into what made No Hwa-Young so power hungry or her hatred for men in the military?

It was a nice show overall which had it's shortcomings.

Ps: Do Bae Man and Cha Woo In were swoony in that last scene 🤭

I mean it's not like this one at ALL, completely different subject matter, but my favourite redemption arc, and one of the best done in kdramaland imo, is the one in Sassy Go Go, and I cannot recommend it enough.

Thanks for the recommendation. I'll definitely check it

Thoroughly enjoyed this from start to finish, it was by no means a masterpiece but it was entertaining and fun to watch.

This is probably the best role I've seen Jo Bo-ah in and its nice to see Ahn Bo-hyun finally get to be a leading man. The rest of the cast was pretty great too.

Dude, that cut away at the end of 16 was CRUEL.

I enjoyed this show but I don’t think it was technically amazing. Episodes 12-14 were thematically the strongest, and probably the best made, but I found the set up of everything, especially the villains, and the ending, to be a bit contrived and forced in places, and lacking the gravitas and intelligence that it clearly had the POTENTIAL for, and that did shine through at times. (And yay for when it did!)

I felt the beginning 6 eps actually dragged somewhat; it's usually the opposite in kdramas lol- and the ending was lacklustre and weak in comparison to the hard hitting satisfying event it could've been.

Also, whilst the middle quarter was thematically strongest, there was more dark action comedy at the beginning that kinda dwindled out in the second half, and I would've liked more of it, or a more consistent balance of tone between action and military court drama, because I enjoyed each of those parts at their strongest individually a lot. I also felt like the leads didn't have enough screen time weirdly enough haha.

Also grenades have a death radius of 5M and they should all be dead...

That being said, and all other minor quibbles aside, I never really found it hard to get through an episode and found it had an easy to click on and campy action factor that I looked forward to every week, and had fun with.

After this and Lawless Lawyer, I can at least conclude that this writer is capable of very watchable and often fun dramas, if technically lacking at times.
(And that this is slightly better than LL, which had an entertaining 1st half and boring & average 2nd half)

Loved Jo Boah in this role. I mean, I always love her but this suited her a lot.
Also! Please give her more badass boss lady roles!!! Please! I've always known she could pull them off and this did nothing but confirm that. Those pant suits at the end! My queen!

It was a nice drama, nothing incredible and I won't watch it again but it was a fun ride.

I liked No Hwa-Young as a villain, sadly the others were a little too much comical to be taken seriously.

No Tae-Nam's redeemption arc was well written, his mother made him like this and he could fight back at the end.

Do Bae-Man and Cha Woo-In were a fun duo with a little bit of attraction to give us hopes :p

Bolt was the cutest! No doubt about it!

Very enjoyable but an odd mixture of painful and serious situations and things that were supposed to be comic relief. Very disappointed we didn't get to see our hero with his shirt off because he was drop-dead gorgeous in My Name!

He had one scene haha. Can't remember what episode it was. 6ish maybe? When he puts on the watch she gives him I think?

In the end, the glaring amount of conflict of interest almost became humourous. Still the show ended on a good note as there was lots more puppies to admire and Bolt had a decent amount of screen time. :)
Though, wasn't Bae-man walking Bolt right before he met up with Woo-in? Or I missed a bit of a time skip?

This drama is not bad, but will be forgettable. And the ending does feel flat, somehow. The comedy brought comic relief but sometimes feel out of place (or it is just me that is not a comedy person).
And saaad Noh Hwa-young doesn't become at least a major army general. 🙂I really want to know how she becomes a person like she is, she is even afraid to touch her son's hands. The only time she looks like a mother to her son is when his son tries to release hand grenade (why so small explosion?). Even at that time the only thing she wants to protect is herself. How sad isn't she?

(why so small an explosion?) - because dramas don't know how most weapons work, let alone grenades.

It was an easy watch but in my opinion there are several issues:

(i)The show can't make up its mind what it wants to be. It veers between goofball comedy, campy action sequences, investigative courtroom drama, makjang revenge plots and midway veers into "D.P" style storytelling about the impact and consequences of hazing/bullying (episodes 12-14 i believe). The sum of all its parts dont really quite work for me and the shift in tone/mood each time is too jarring, although individually the epsiodes are watchable.

(ii)In terms of direction, the show makes a spoiler of the various reveals/twists too fast (example General Won Kichoon's arc, Ha-joon's betrayal) and could have built up the tension a lot better. It seems like the director is almost too eager to tell the audience what is happening

(iii) The interactions/conflicts between Moon-Gu and Hwayoung and the infighting within the PAtriot Club is more interesting than the actual investigations carried out by the ML/FL. The ML/FL pairing didn't really have to do that much in the end to bring about the downfall of Hwayoung when you think about it, which weakens the impact/sense of satisfaction of the closing.

Did the show ever cycle back to the opening scene where Do Bae-Man was being dangled upside down off a skyscraper by red-haired Cha Woo-In? I don't think so! Or did I miss something?

Missed it- it was in episode 2/3 or something like that...it was all in his mind

Ah, okay! Thank you! I guess I drifted off (6am starts at work). I finished the series a month ago, and for some reason just had a random flashback to the first scene, and thought, "What the heck?" Perhaps it was Do Bae-Man's kinky idea of foreplay? Haha.