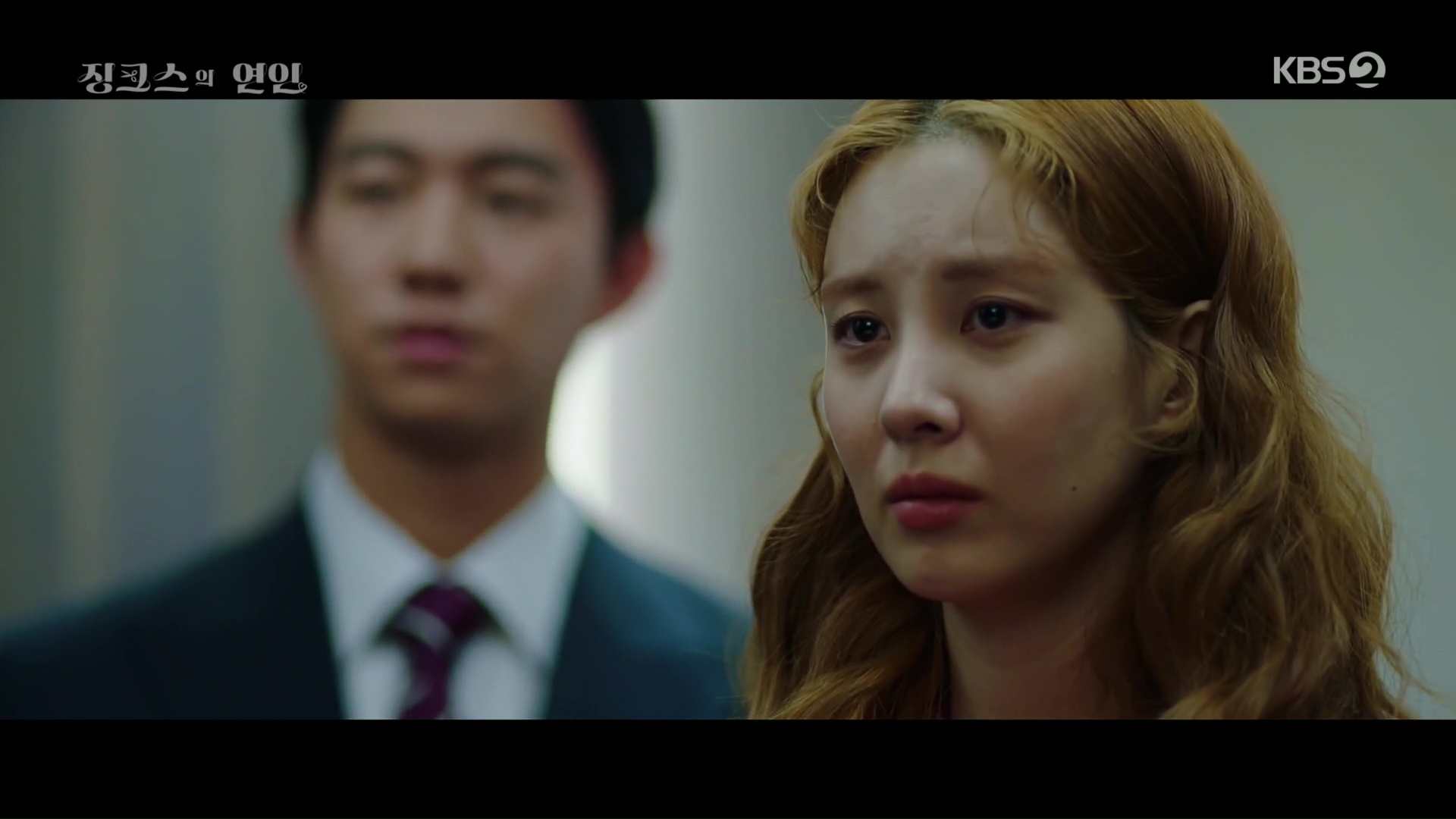 Despite her now-limited freedom, our heroine is learning to put her powers to work for her like never before. But, whether she’s aware of it or not, her gift doesn’t come without a price… and a ticking clock. 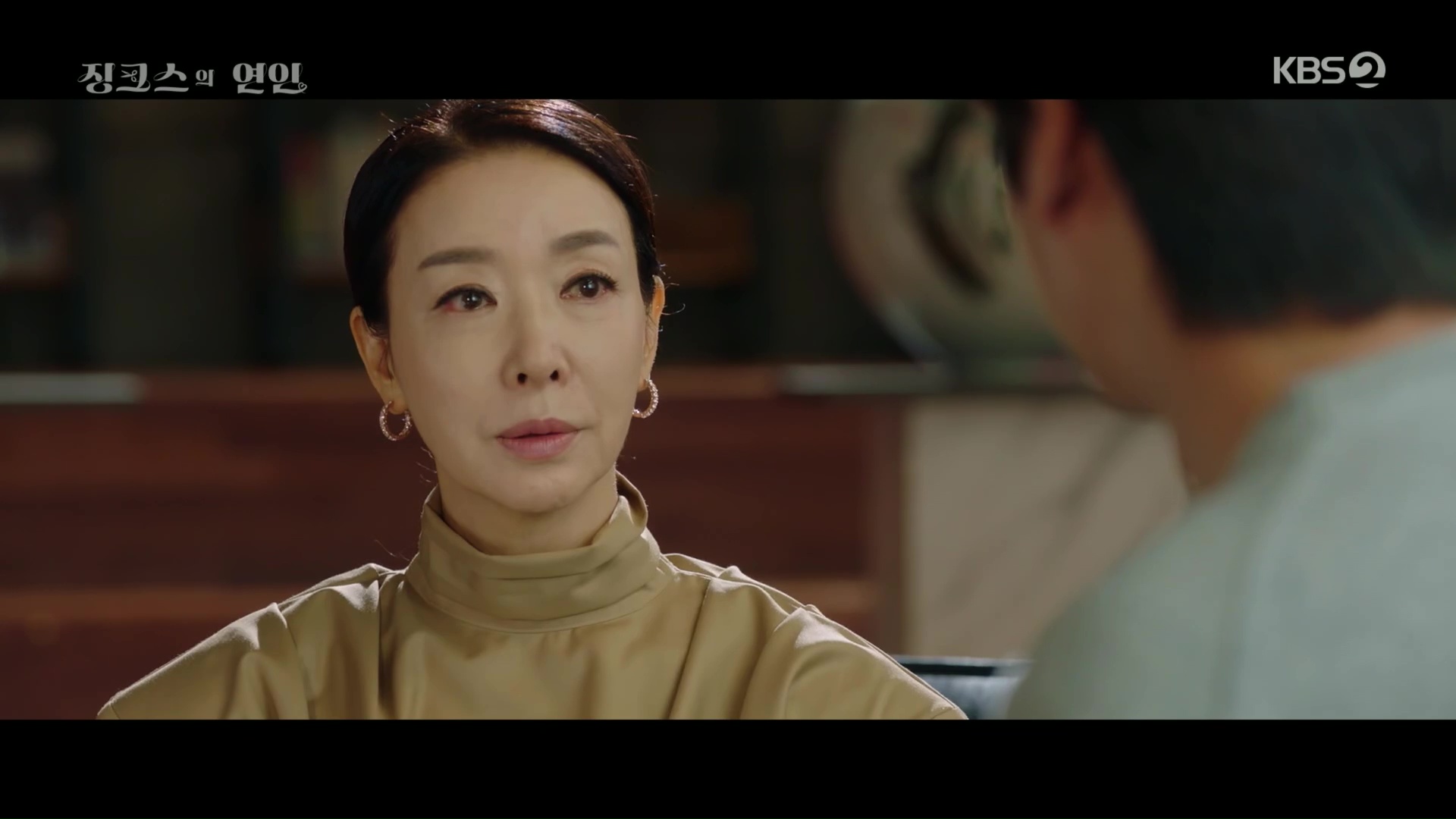 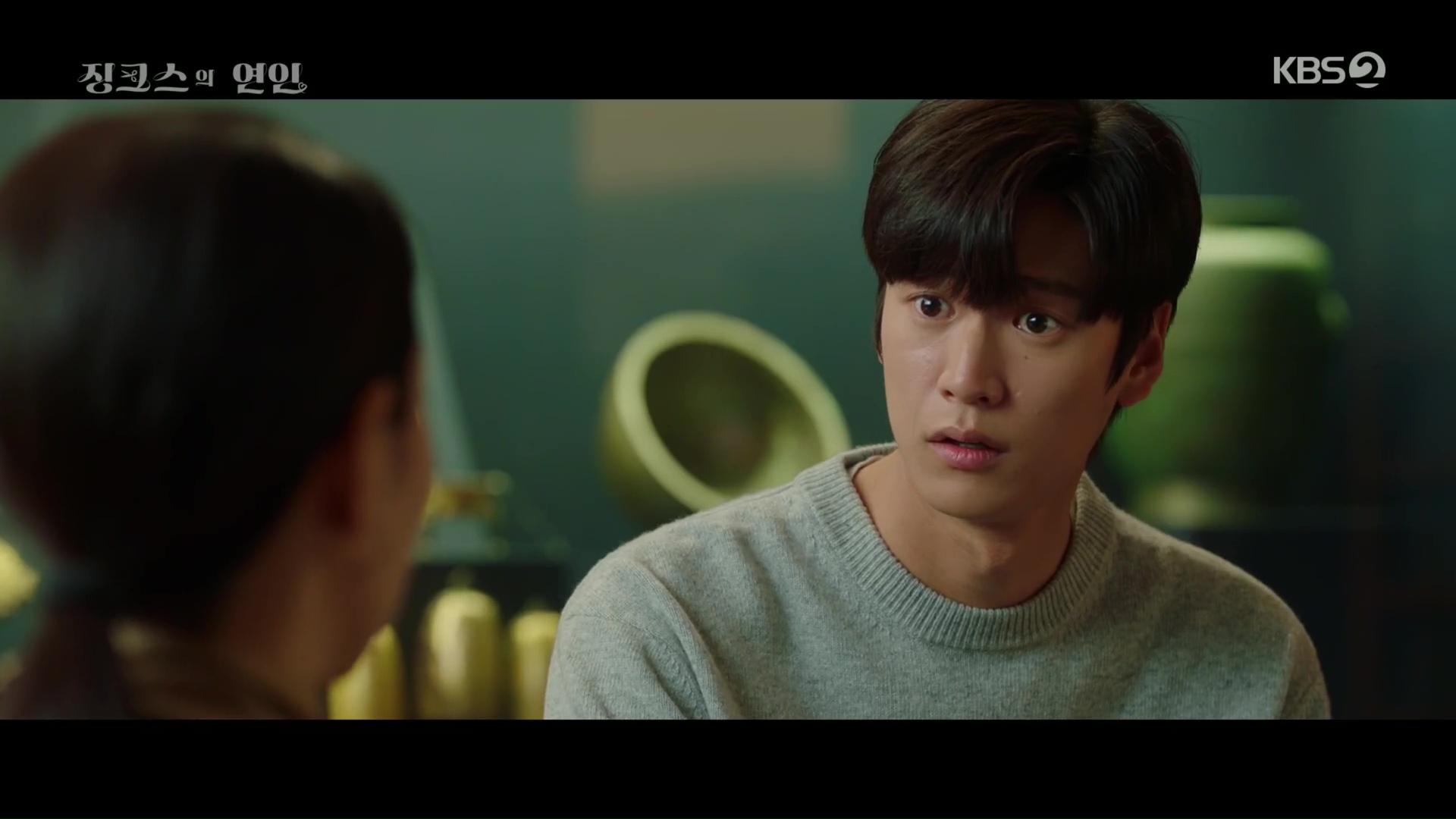 When the mysterious woman (who looks exactly like Seul-bi’s grandmother) shows up at Su-kwang’s fish shop to ask about Seul-bi, Su-kwang glumly says no one of that description lives there and turns her away. Eventually, however, curiosity gets the better of him. Since she left her business card behind, he goes in search of answers.

Answers he gets, and they’re… concerning, to say the least. Before we get to that, though, this woman isn’t actually Seul-bi’s grandmother – she’s the (deceased) grandmother’s twin sister, now known as EUN OK-JIN (Kim Bo-yeon). 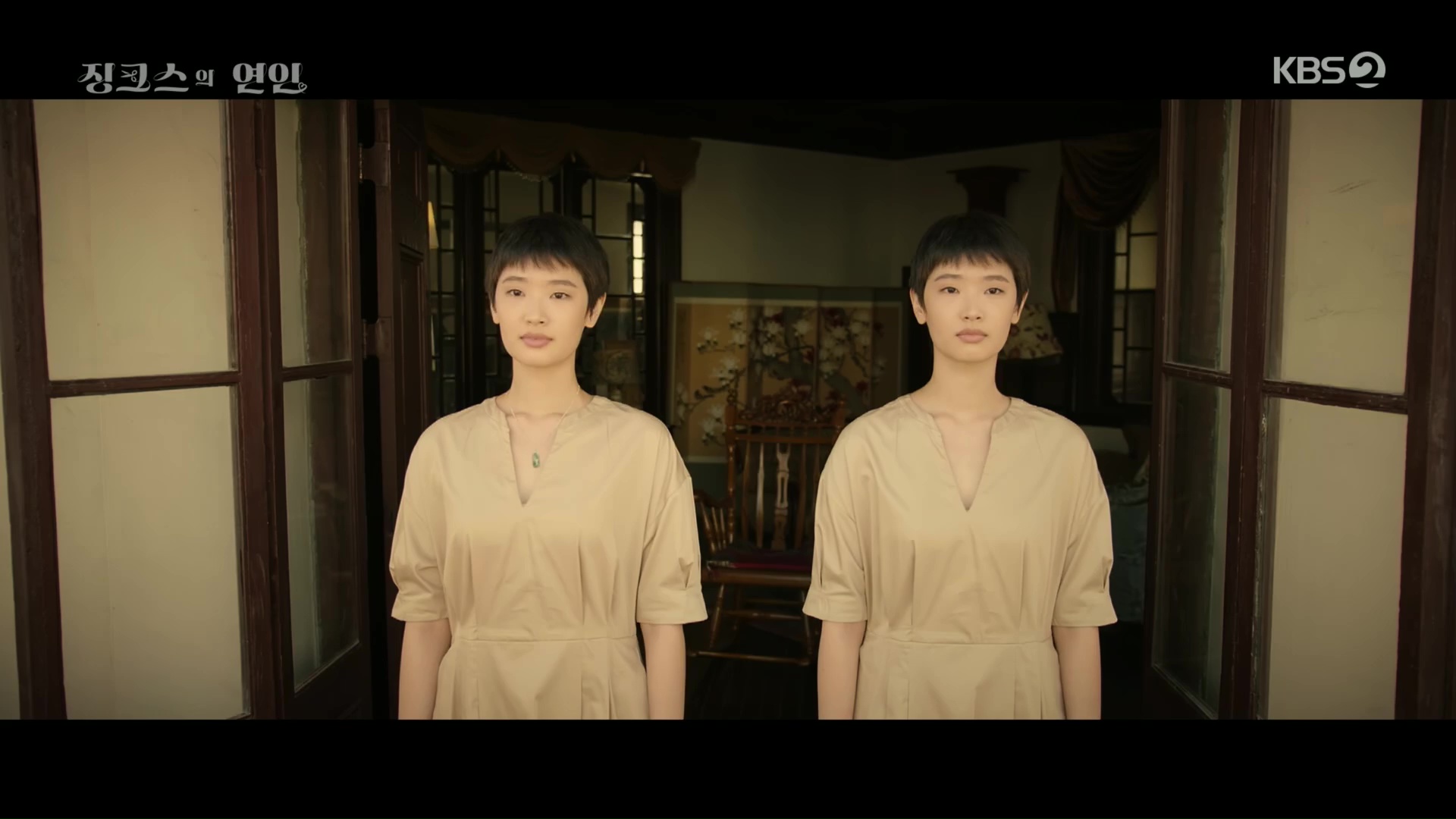 As a young adult, she escaped from captivity, after which a priest helped her destroy her magical stone. This freed her from her powers altogether, enabling her to live a normal life.

Over the course of several visits, Ok-jin fills Su-kwang in on some crucial details about the nature of the female shamans’ lives. I’d hoped the whole “no one else can touch her” rule was just Chairman Sun being evil and controlling, but apparently the more people Seul-bi hold hands with to read their futures, the more she absorbs their negative energy in return. 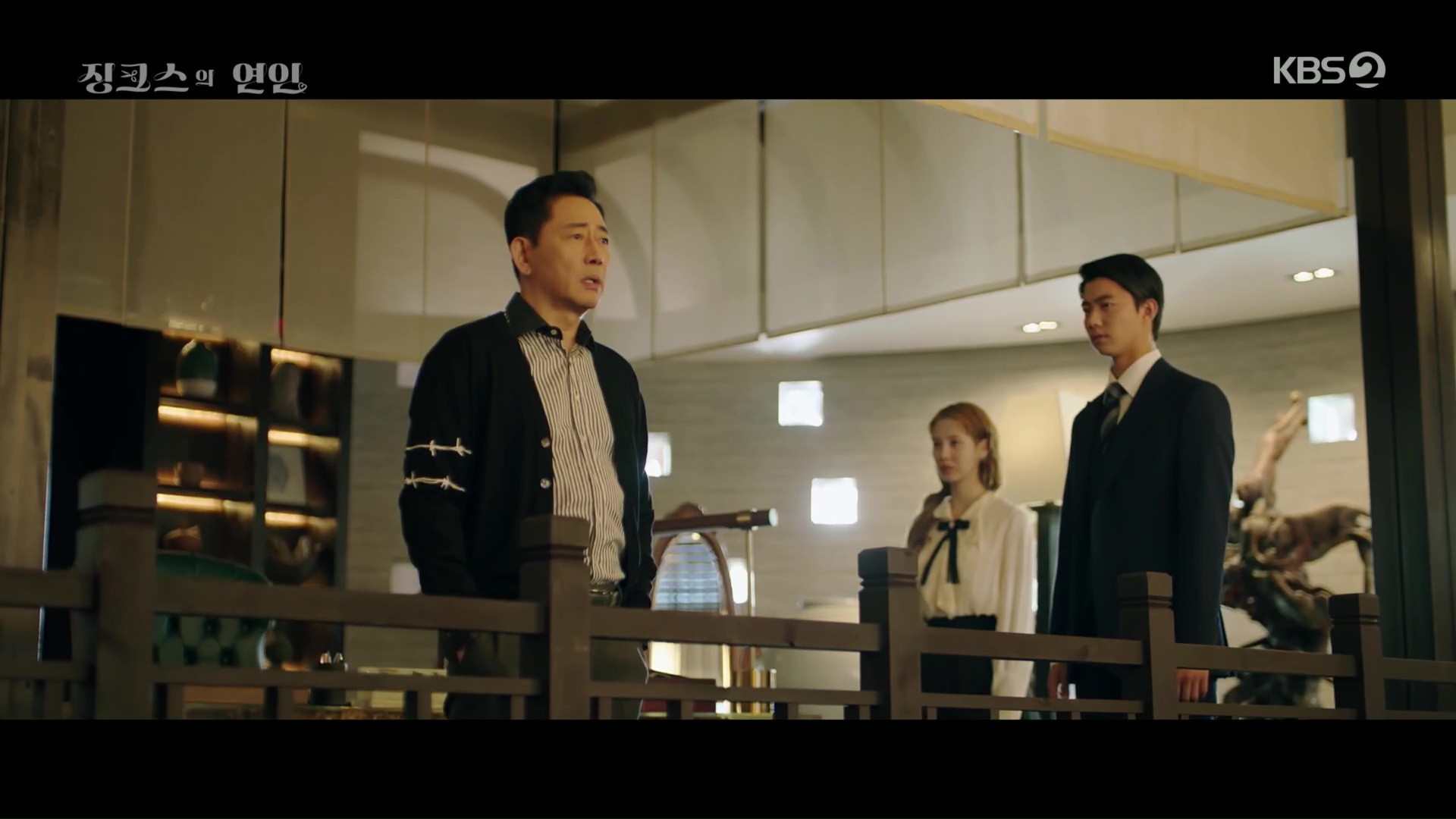 Eventually, she’ll accumulate so much negative energy that she’ll become a witch, and the energy will overflow and destroy the people close to her as well. That’s what happened to Chairman Sun, who is currently teetering on the edge of insanity, and it’s what happened to his father, too. Even Min-joon is already showing signs of, well, something mysterious and painful affecting his hand.

While it’s possible for Seul-bi to break free from her powers like Ok-jin did, she’s running out of time to do so. Exactly how to help her do that is something Su-kwang will have to figure out on his own. 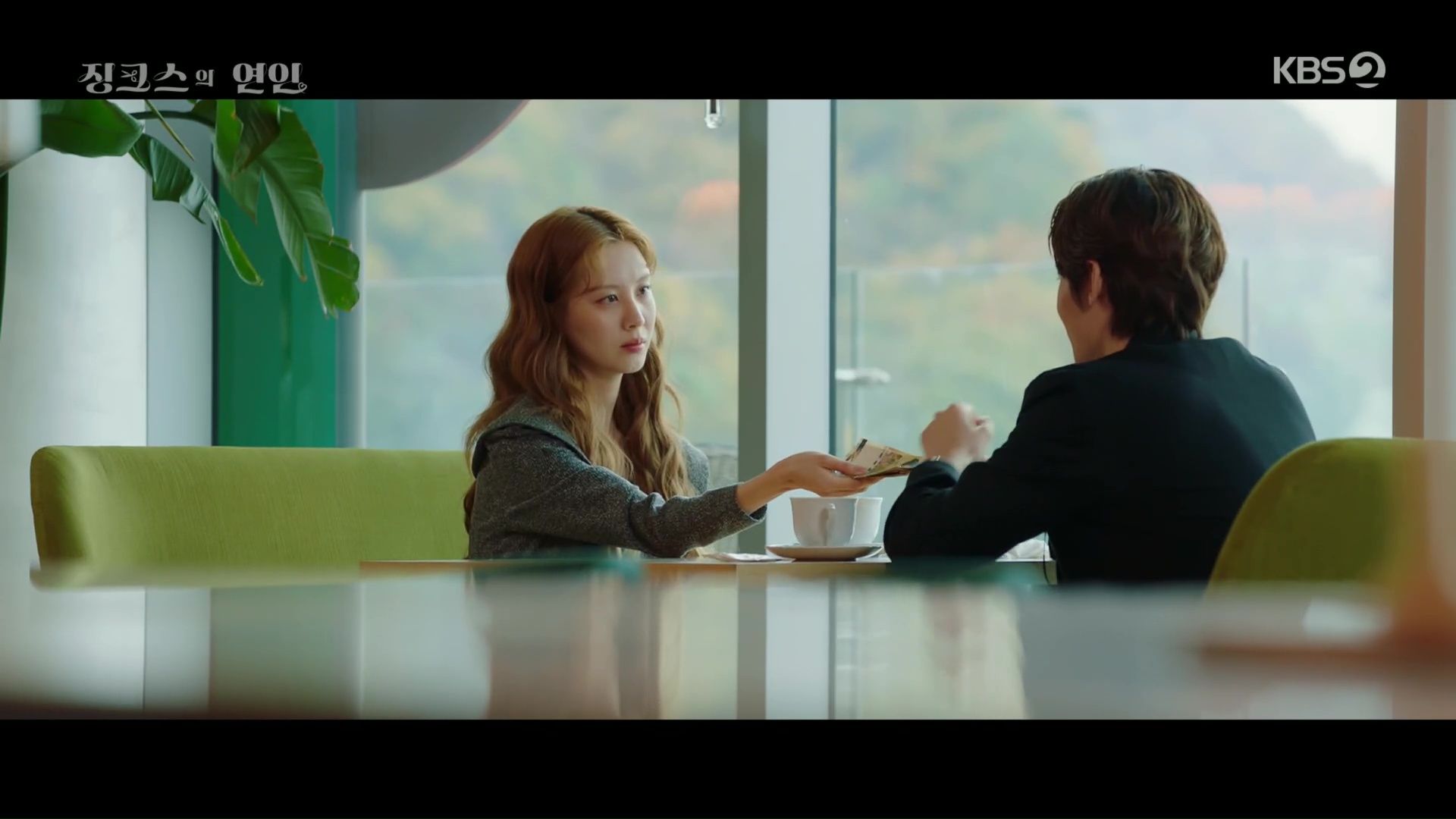 It’s unclear just how much of this information Seul-bi knows (though you’d think it would be essential for her to have known it as soon as she was old enough to understand it), but when her mother warns her about the danger of meddling too much in people’s lives, she doesn’t seem to care. In fact, she rather likes reading people’s futures – especially now that she knows she can charge for it.

By the time Su-kwang decides he’s ready to help her become an ordinary person, Seul-bi flat-out tells him that ship has sailed. What’s more, she’s concluded that she only thought she loved him before because he was literally the only person she could lean on at the time, and she’d rather just be friends now. 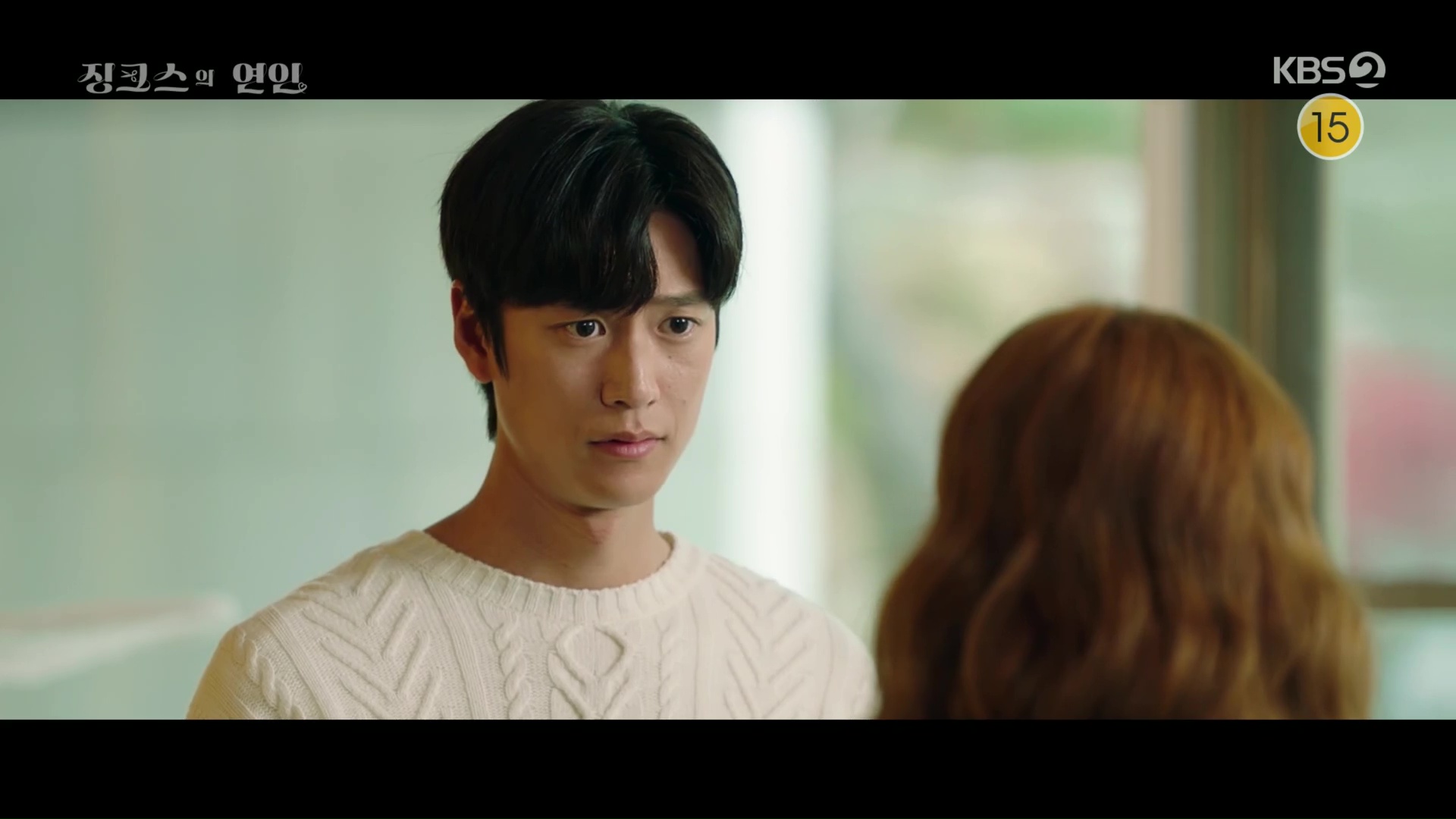 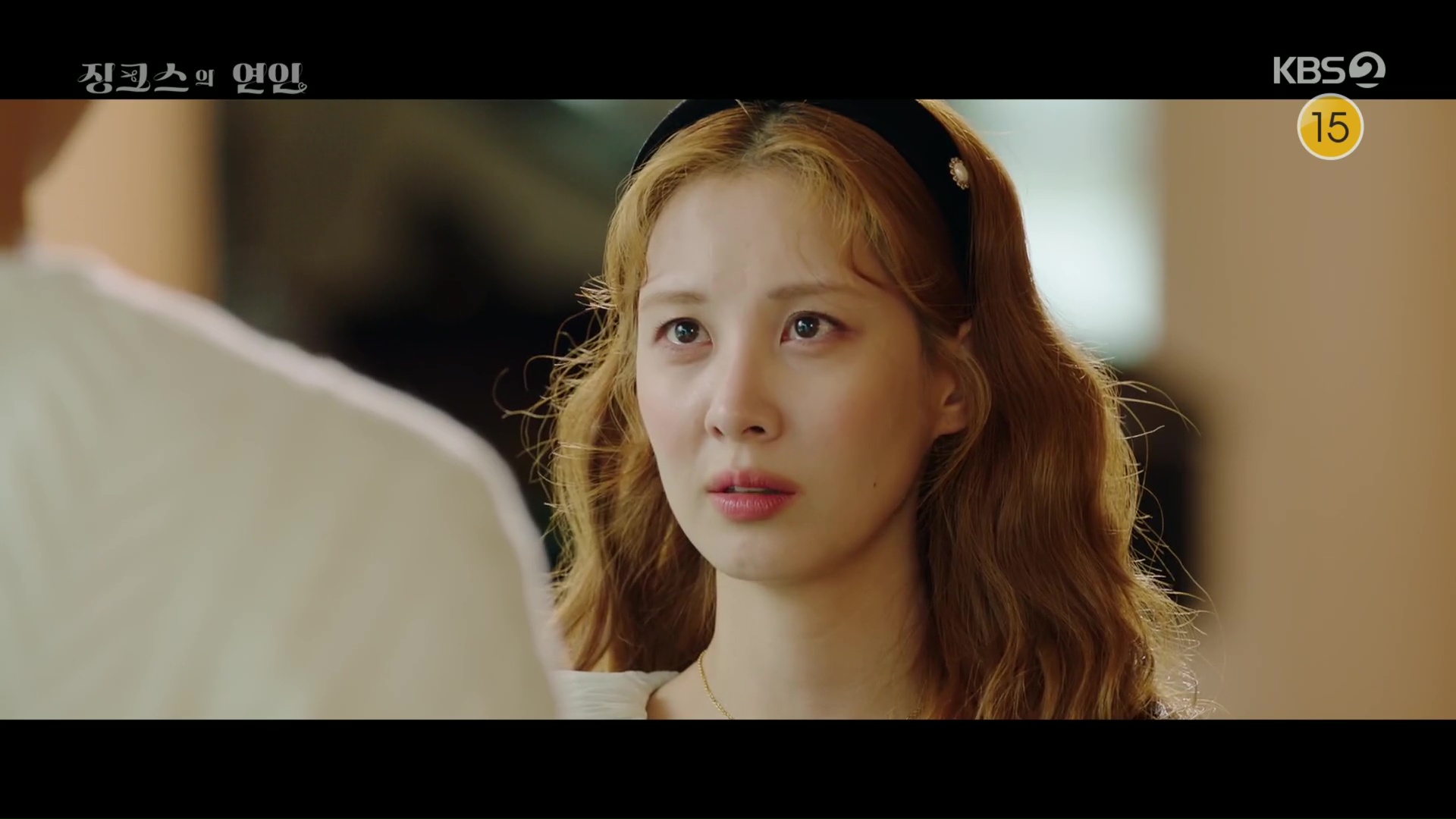 While this exchange is supposed to be heartbreaking, I can’t help agreeing with her. And even if she’s not being totally honest, Su-kwang isn’t exactly showing himself to be any better than the likes of Min-joon when it comes to trying to make decisions for her instead of listening to what she wants.

In fact, I’d almost say Min-joon is doing a better job of that right now, though that’s still not saying much. Pretty much anything Seul-bi wants or anywhere she wants to go, all she has to do is ask, and Min-joon arranges to accompany her or send someone else. Sometimes she even gets to go on personal errands alone. 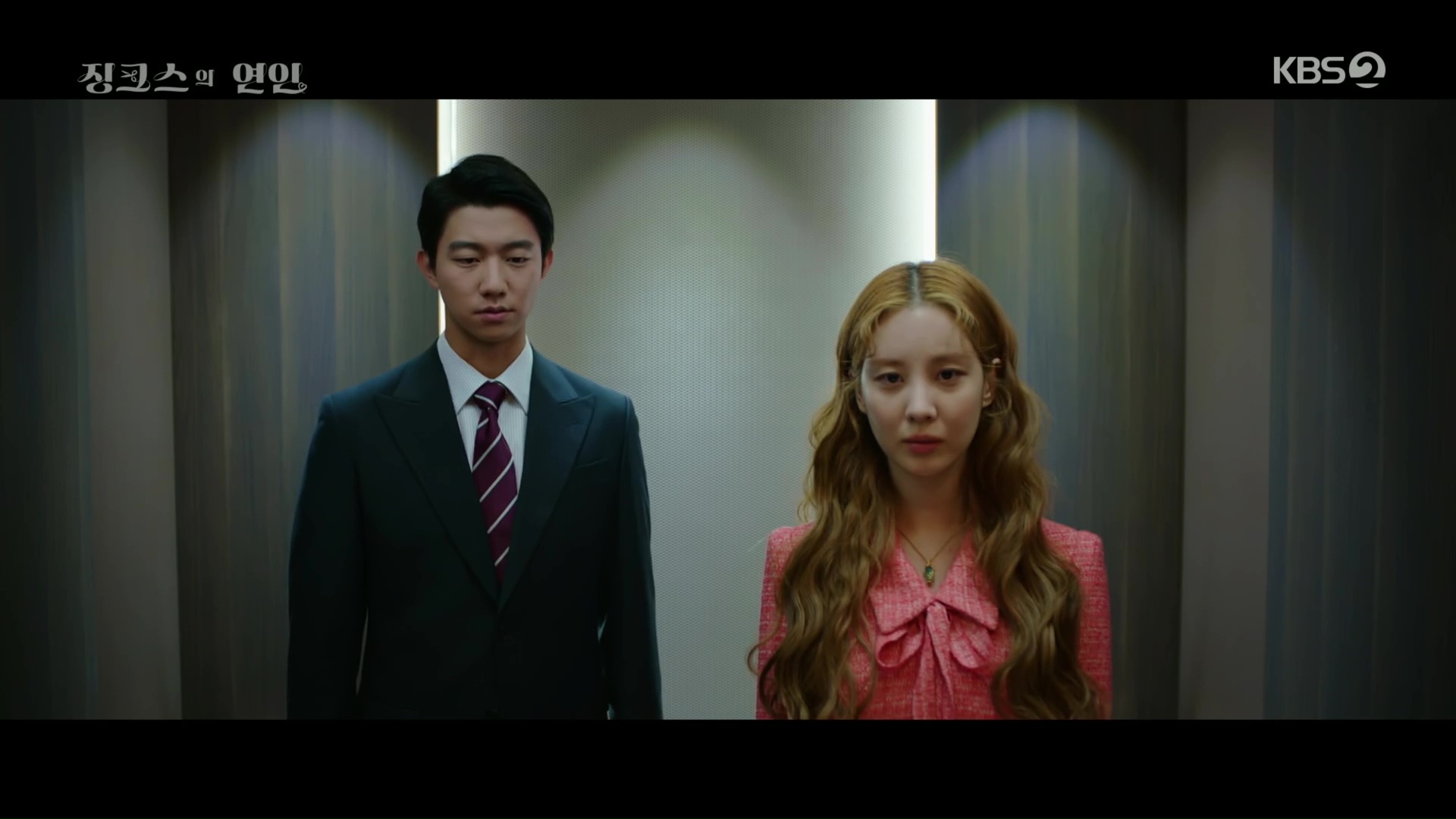 But it’s worth noting that Min-joon’s indulgence is limited. As long as what she wants is okay with him, he’s happy to comply. When she stays out too late for his liking to meet up with Su-kwang, though, Min-joon shows up with bodyguards to take her home.

And, as Seul-bi bluntly points out, he only wants to be with her when it’s convenient or makes him feel good, not when other people meeting her could inconvenience him.

It’s disheartening just how much of Seul-bi’s once-bubbly personality has turned somber and subdued, but on the plus side, she doesn’t hesitate to take charge of any situation she finds herself in, using other people’s attempts at manipulation to accomplish what she wants instead. 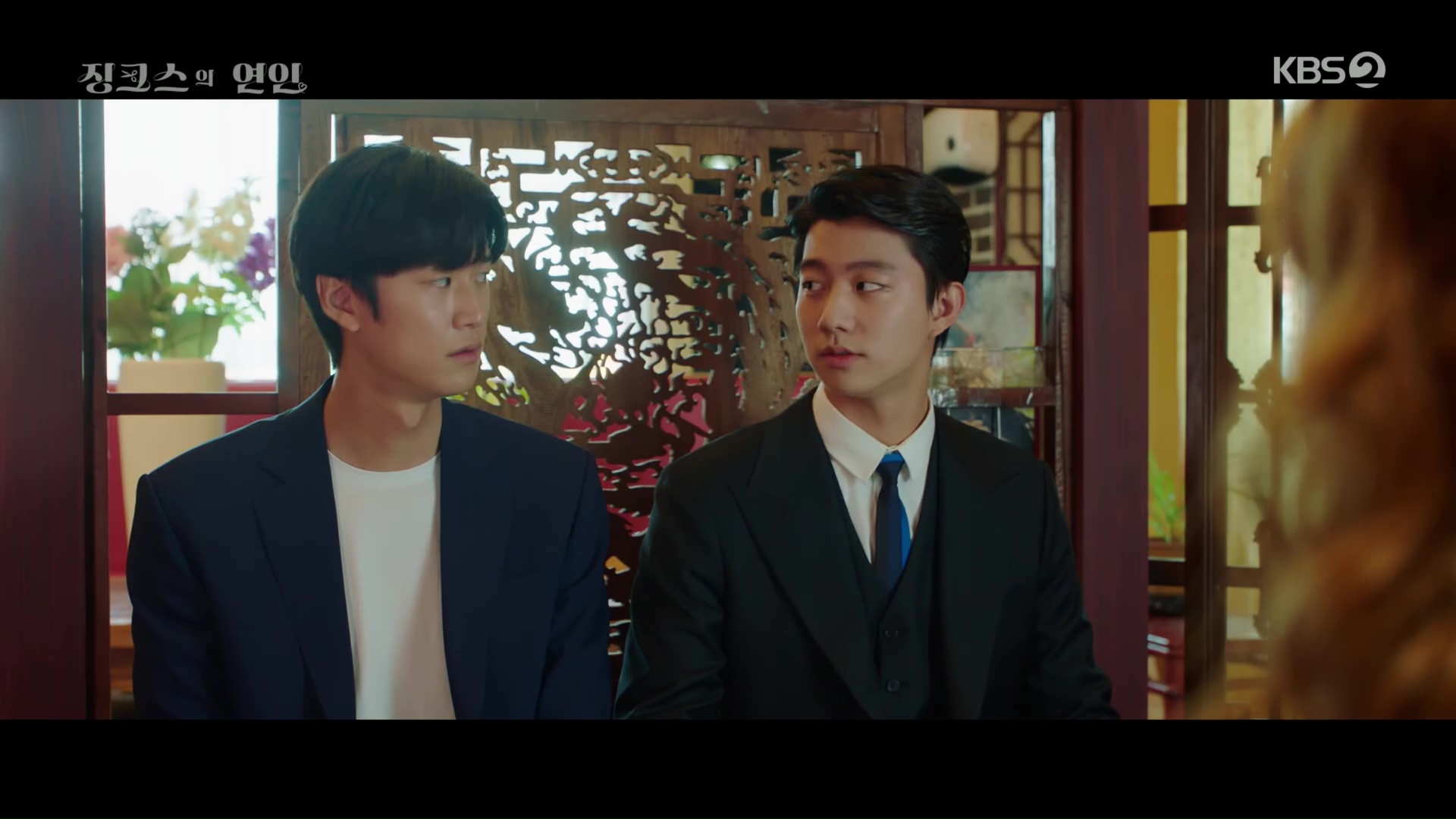 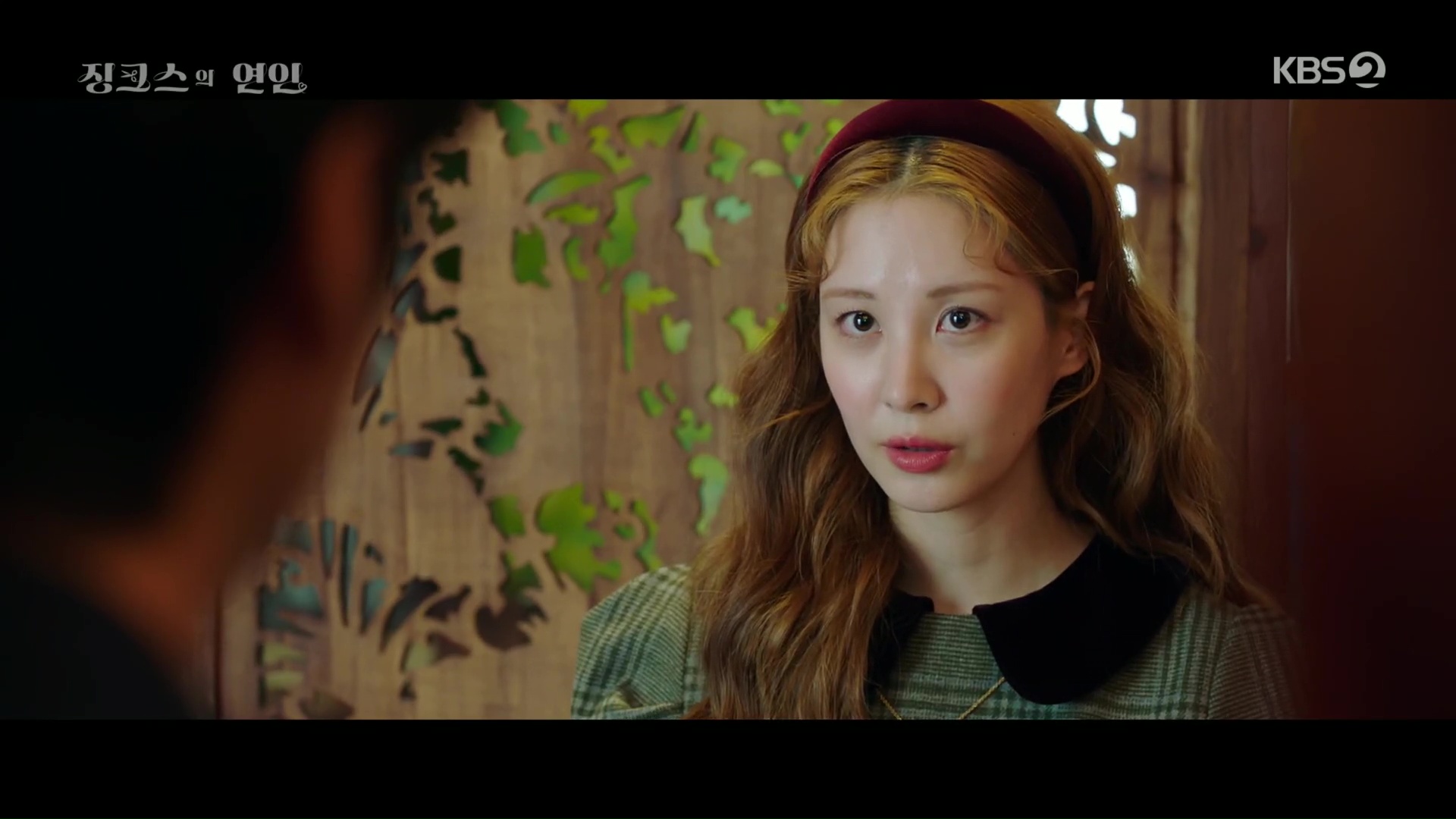 For example, when Dong-sik commissions a reading, she not only performs it, but also uses the future she sees to 1) save the market shopkeepers from being swindled, 2) get Yoon-ho a big promotion, and 3) give herself the chance to buy lunch for both Su-kwang and Min-joon at the same time. (She wants to thank them for helping her, and it’s more efficient this way.)

Hah, and they have to just deal with the fact that she earned the money by reading Dong-sik’s future, which neither of them likes and she plans to continue doing anyway. So there. 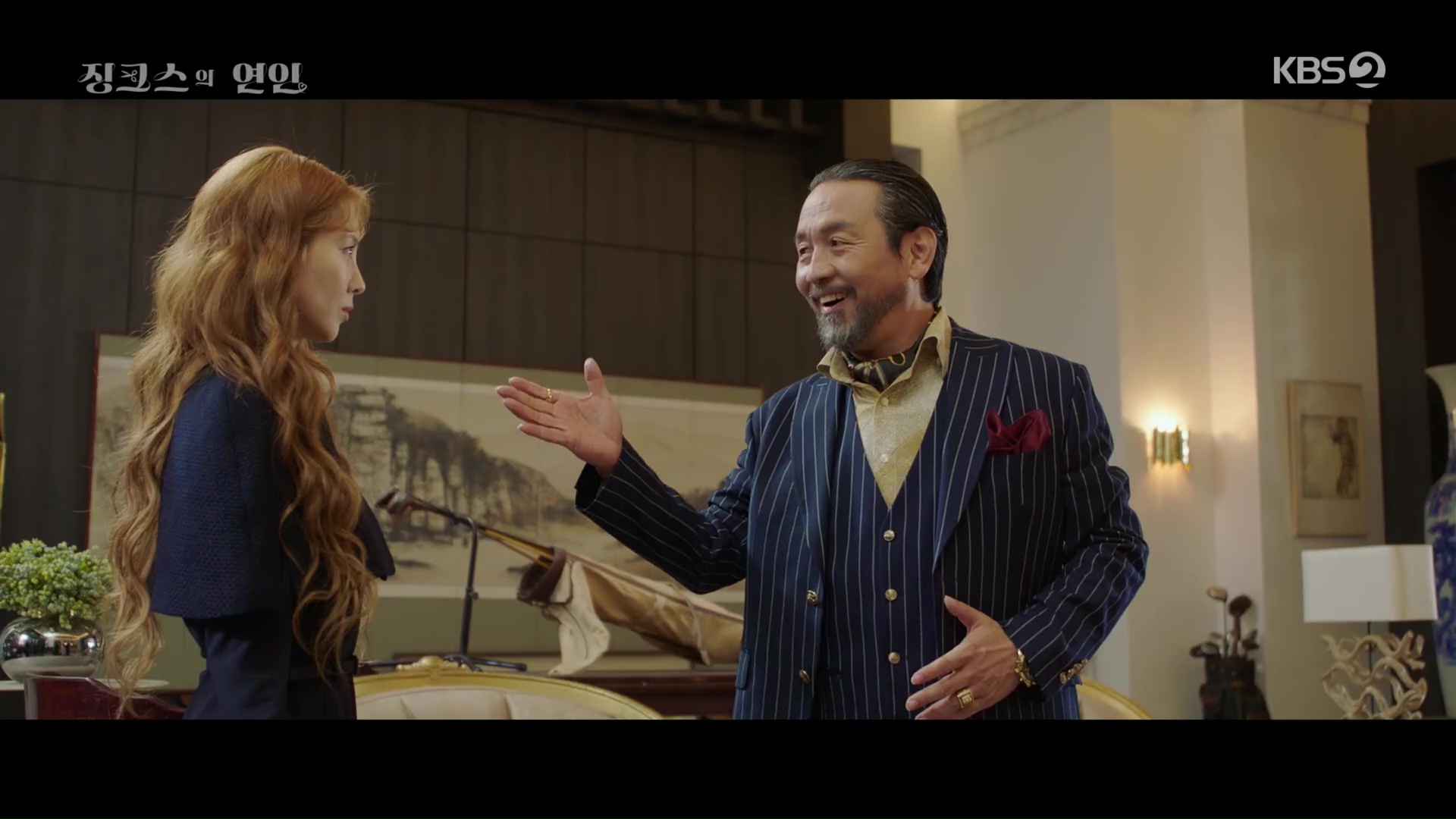 On another occasion, she reveals that she knows her father is planning to turn her over to Chairman Sun’s brother, Il-joong (a.k.a. Dong-sik’s father). Instead of stopping him, she goes right to Il-joong and says she’ll be happy to read his future as long as he pays her for it.

And no, it’s no accident that both encounters involve Il-joong and Dong-sik. These episodes spend a lot of time on business politics between Chairman Sun and his brother and their respective sons. Il-joong wants Seul-bi’s power for himself, while Chairman Sun seems more frightened of her than anything else, hounded by guilt over what went down with her mother and grandmother 20 years ago. 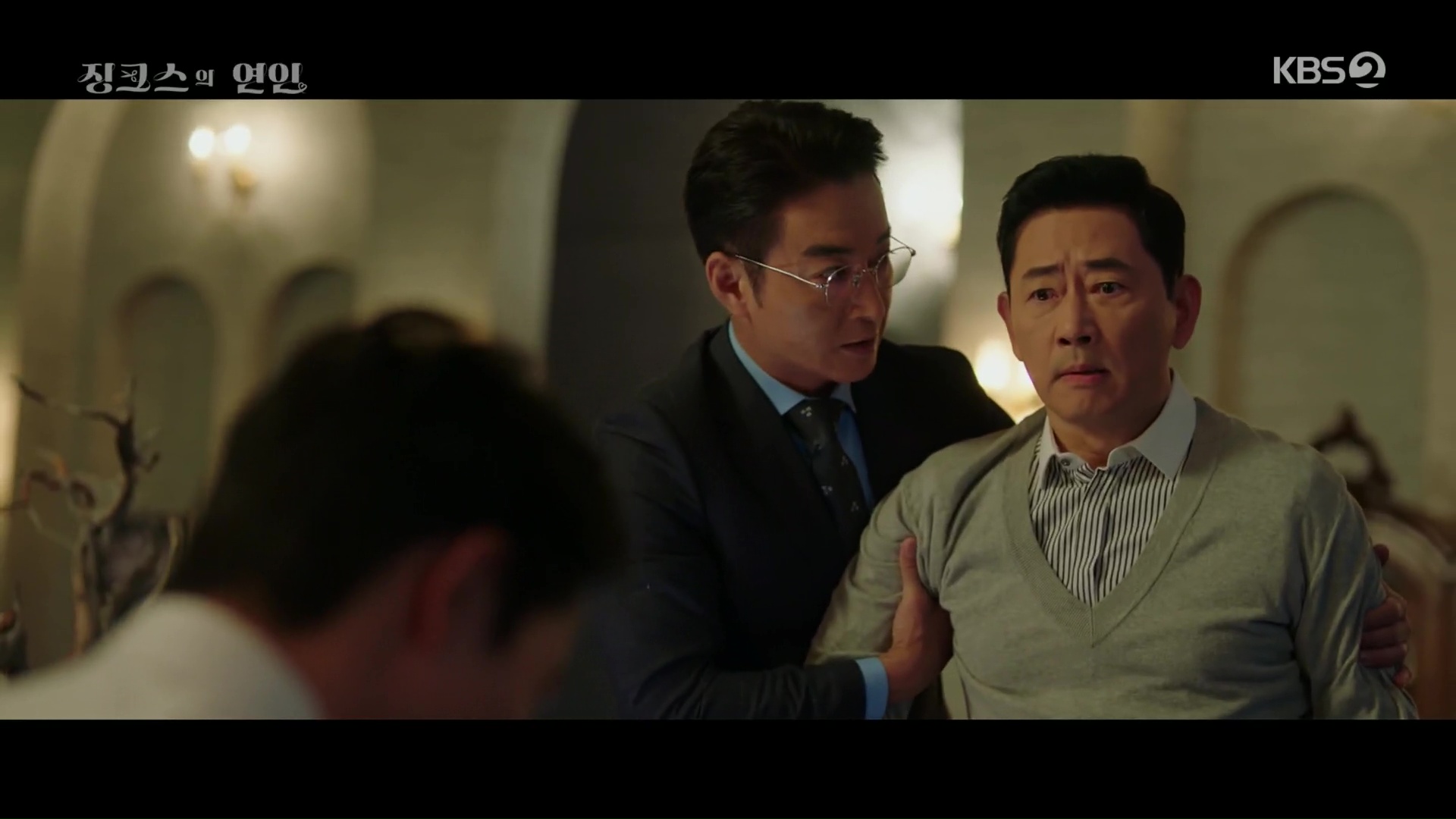 After Min-joon uses Chairman Sun’s mental health records to apply for limited guardianship (which earns him a glass thrown directly at his head that he does not dodge), Chairman Sun accuses Seul-bi of manipulating Min-joon.

He claims he never would have brought Seul-bi’s mother back all those years ago if he’d known all this would happen, but Seul-bi’s mother throws back that he knew very well how badly it would end and chose to do it anyway because that’s the kind of person he is. Between that and Seul-bi not backing down from the manipulation accusations, Chairman Sun leaves the room in hysterics. 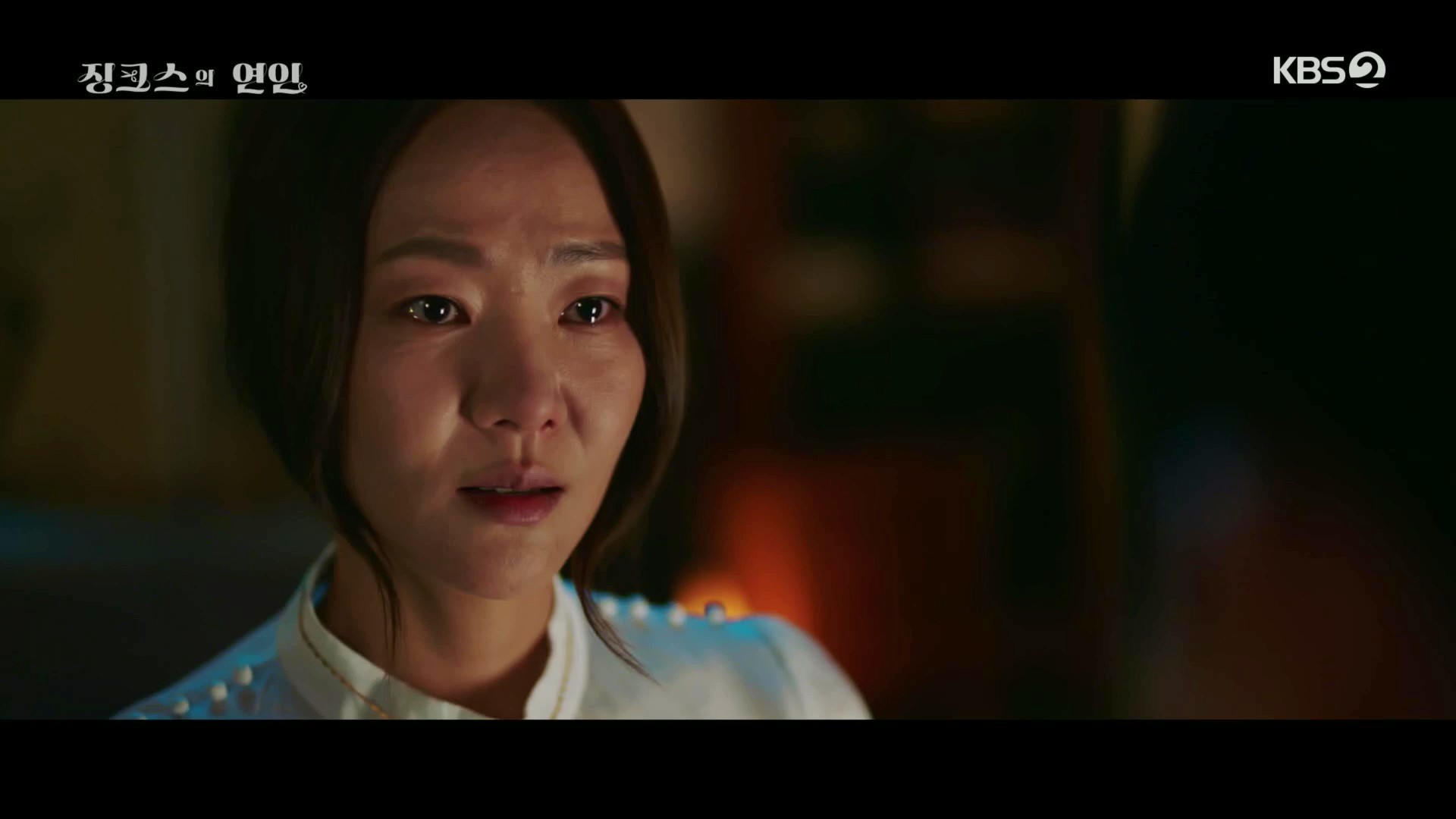 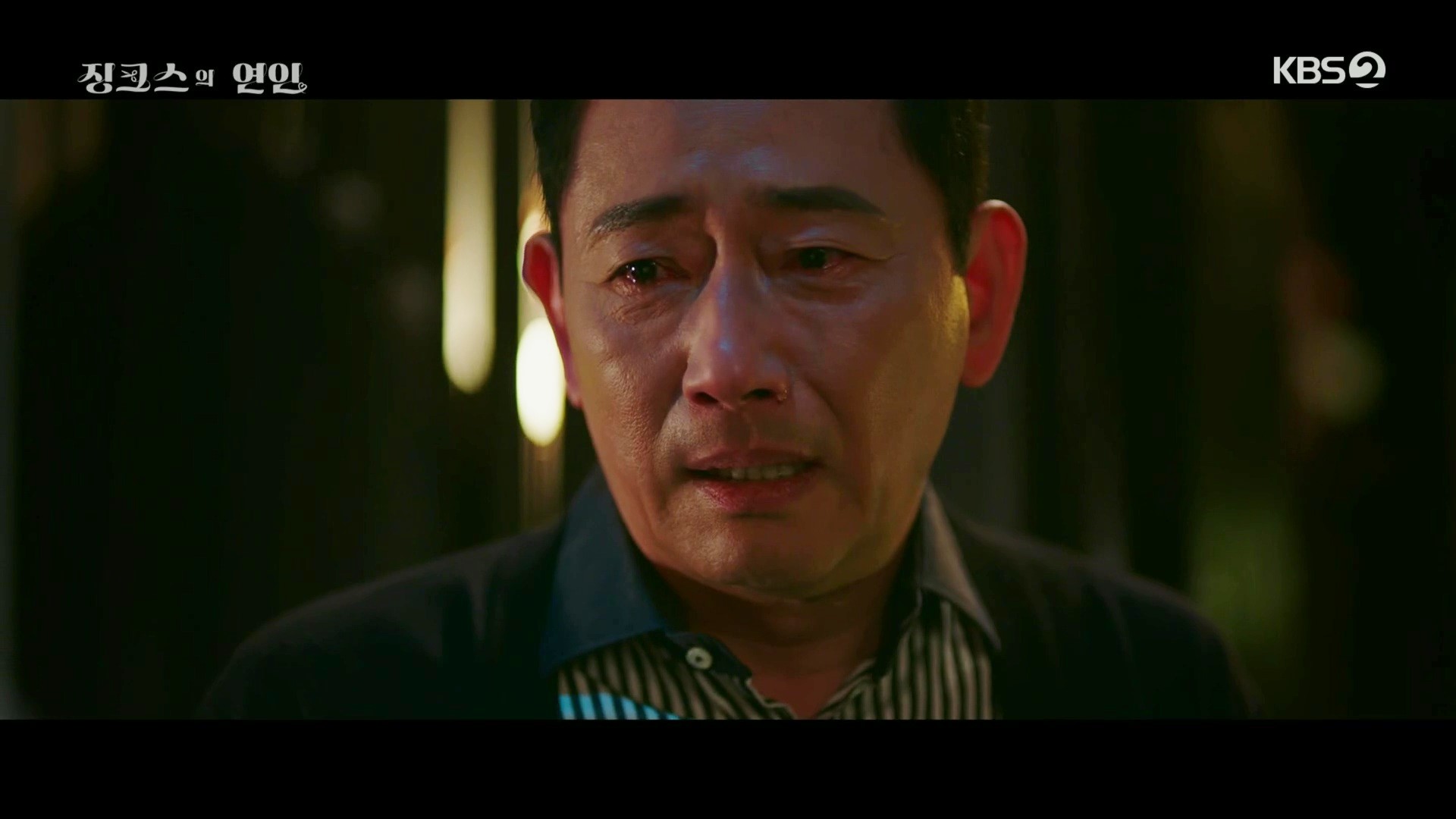 Despite all the answers we were given this week, we’re left with a lot more questions, most of which only go unanswered because someone else interrupts the conversation.

Seul-bi hints that her father isn’t actually her father. There’s still a lot we don’t know about the danger Seul-bi is in from her own powers. And Chairman Sun’s secretary shows up at Su-kwang’s place to tell him it actually wasn’t Chairman Sun who killed his mother and ruined his life.

At least Seul-bi seems to have long-term goals in mind, and is calling in favors from all her outside-world friends. Here’s hoping it’s a secret plan to engineer her own permanent freedom and show up everyone who dared underestimate her. Min-joon and Su-kwang included. 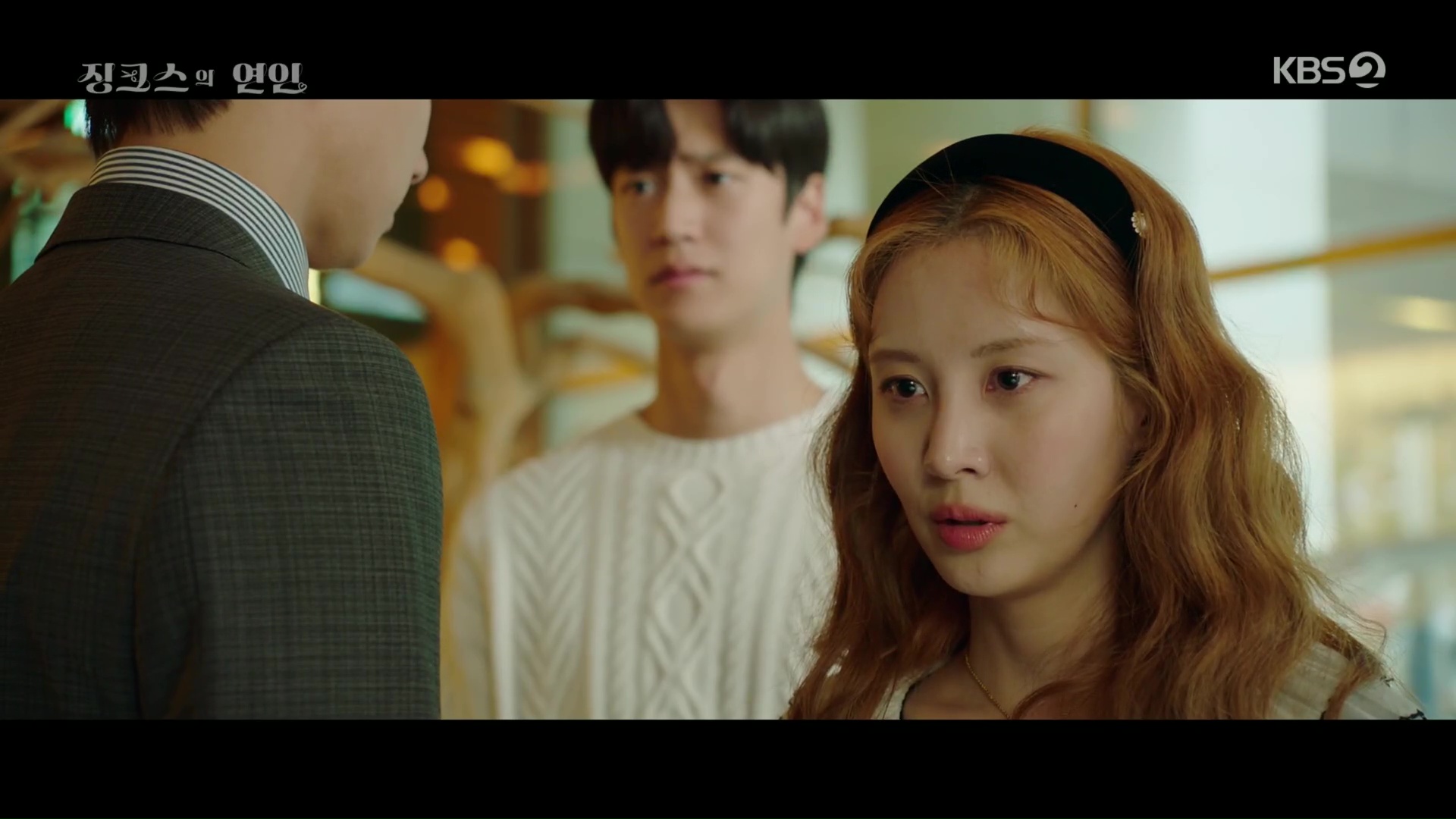 The break up went for much longer than I anticipated and I’m glad because it was nice to see Seulbi standing up for herself a little bit more. She’s come a long way from her extremely childlike and bubbly nature at the start, but her warm heart is still there which is lovely to see! I wish I had something to comment about the larger plot line but that required me to actually pay attention to what was going on, which, sadly, I did not do hahaha but reading this recap, it sounds like I didn’t miss too much.

@mistyisles thank you for sticking with this one. As someone who dropped out it actually seems like there has been a positive change of pace with the storyline showing less of the childlike dependency and more agency on Seulbi’s part. It is good to see that strong women are being showcased without having to adopt an evil persona however the hint that this can occur is a concern as it’s such a lazy way to portray women with goals. It does sound like this could become very dark by the end of the season so I am glad I left when I did but it will be interesting to see whether by the time this gets wrapped up they can find a middle ground for Seulbi’s character to be independent and have a respectful love interest if that is something she wants.

One thing confuses me. How did Sul Bi’s mom end up with powers of her own mother didn’t? If what we think is true, the twin who escapes is her aunt. I didn’t think of a mother didn’t have power they couldn’t pass it on to the daughter. Unless we are missing something…

I had the same question: if the great-aunt is the twin with the powers, how did grandma stick around for so long? Does this mean that when great-aunt ran, her sister was already pregnant with Seul Bi’s mom? And it just sort of skipped a generation or something? And does that mean Seul Bi’s mom actually did kill her own mother?

I mean, I’m not particularly invested in this show so kind of don’t care about that level of backstory, but how did Seul Bi’s mom know to give Seul Bi the address of her aunt in the outside world?

And on an unrelated note: if someone throws a cut-glass tumbler at your head and it connects, you will have a skull fracture. You just will. Maybe Min Joon’s hand tremor is down to repeated concussions and cranial bleeding. It’s like throwing a glass paperweight at your son’s head - you MEAN to kill him.

When they showed the back story of the twins, one had the stone necklace and the other did not. The one with the stone was being shown favor by Grandpa(?) While the other was ignored. So, the Aunt was born with a stone in her hand, and the twin was no, i.e., not a shaman. But, apparently, she could give birth to a shaman, Seul-bi's mother.

I’m currently trying to wade through ep9 (I fully admit I’ve been putting it off because this show is frustrating me at this point) and I’m honestly getting extremely tired of the way the angst between Seulbi and Sugwang is dragging out. They meet, it’s awkward, he’s rude and mean, she leaves. Over and over. Can’t we make some kind of progress with something already? And don’t get me wrong, I’m not really wanting our lead couple to get back together right now (if ever, really), but actually being truthful and honest and working through things like adults would be nice.

I’m also a bit sad that Seulbi has lowkey lost her childlike spunk. I realize she had to grow up at some point but it happened awfully fast and I’m missing her old personality right now.

Update: After finishing episode 10 I have to say, I’ve officially gone from having few feelings about Minjoon to hating him completely. He acted like he wanted to give Seulbi freedom but what he’s doing amounts in my opinion to taking good care of a beloved pet. She’s still on a very short leash. She has to ask his permission to leave, and when she’s out too long he shows up with his goons and tells them to take her? It’s disgusting. Apparently Seulbi only has power of choice when she’s making choices he approves of. I hope she gets out from under his control and shows him what she’s really capable of.

I'm so tired of the older brother and his son! They are such one-dimensional characters. Shouty and hammy. Interesting that the overall mood is darker in these episodes though. The change in MinWoo has been subtle too. Not sure where the main couple are going though, it's a bit tedious.