A new teaser has dropped for MBC’s upcoming Big Mouth, featuring leads Lee Jong-seok (Romance Is a Bonus Book) and Yoon-ah (Hush), as well as some of the supporting cast.

Lee Jong-seok stars as the middling lawyer Park Chang-ho, who is nicknamed “Big Mouth” for always talking big but having poor results. When he takes on a new murder case, though, Park gets embroiled in a conspiracy and he’s mistaken for the legendary con artist “Big Mouse.” In order to protect his family from the danger that transpires, he decides to take on the alias and impersonate “Big Mouse.”

Yoon-ah plays lawyer Park’s wife, Nurse Go Mi-ho. On the brink of wanting divorce after years of frustration, the Big Mouse debacle almost sends her over the edge. Although her trust in Park has been shaken, she ultimately decides that she will be the one to save their family and embarks on a mission of her own in order to prove her husband’s innocence.

The new teaser begins with our lawyer’s back-lit hero shot, before jumping to his bumbling day-to-day reality. Although Park reassures his wife not to worry and that he’ll take care of everything, he is soon manhandled out of the courtroom by the angry crowd. The captions explain that he is: “Big Mouth, the chatterbox lawyer with a 10% case success rate.”

We then cut to lawyer Park’s imprisonment, where he receives a very scary welcome. We see that he was in a car crash prior and a man asks, “Did something go wrong?” Park replies, “A stroke of really bad luck at the crucial moment.” Back at the prison, mayhem unleashes between the prisoners and guards, and we get a quick glimpse of Big Mouse’s fanboy Kwak Dong-yeon (Monstrous). The appearing text screens reveal our lawyer’s fateful decision: “A need to become the real thing, in order to survive.”

In voiceover, we hear a man questioning who Park really is, whether he’s Big Mouse, and how far he’s willing to go. But our lawyer doesn’t back down: “If you touch me, everyone will die. Including all your families.” With a quick cutaway to Yang Kyung-won (One Ordinary Day), Park continues, “I’m going to kill that jerk.” Meanwhile, Nurse Go begins investigating on her own and the teaser closes on Park’s vow, “I’m starting the hunt. It’ll be done my way, following Big Mouse rules. From now on, I’m the real Big Mouse.” 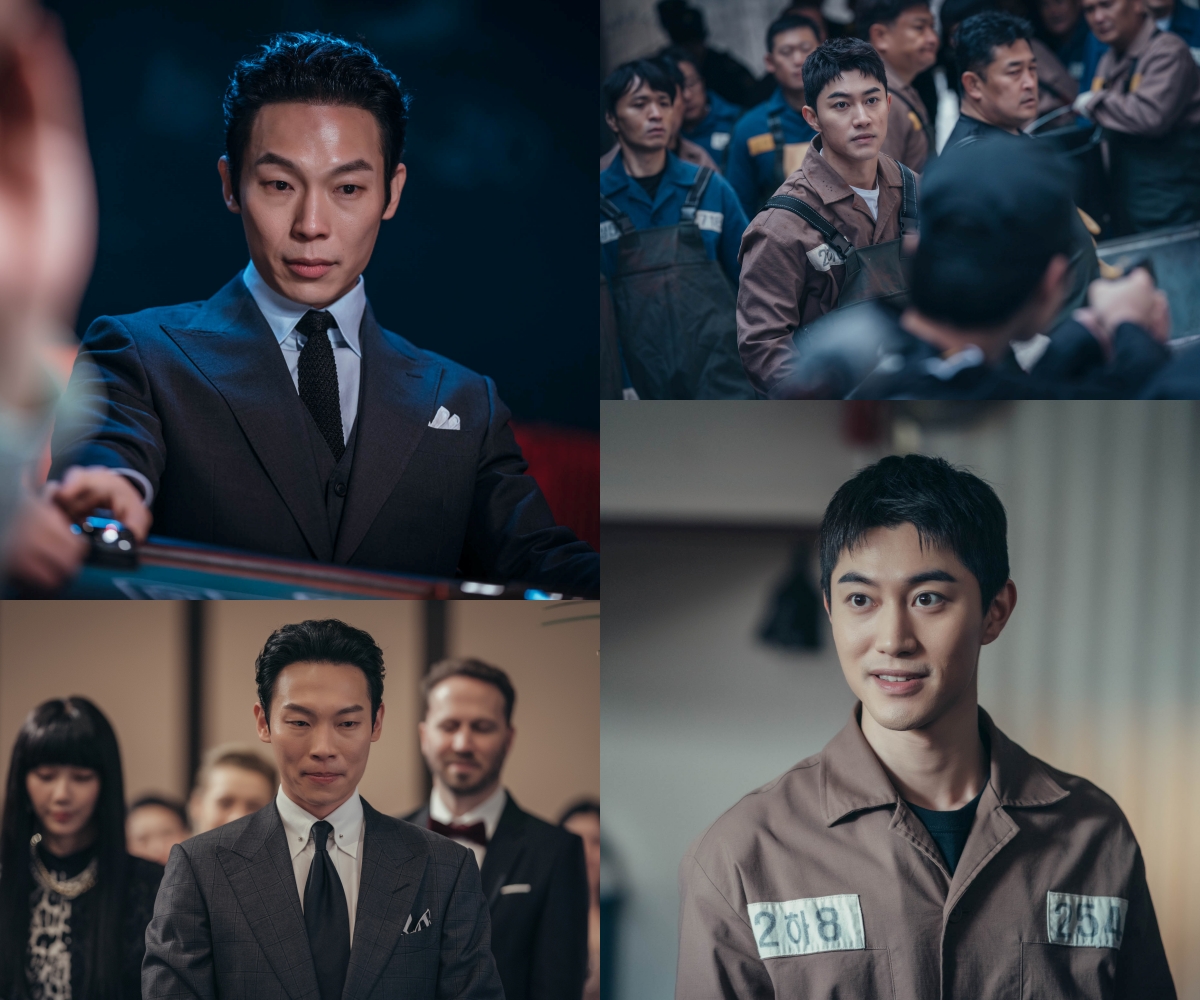 It's Lee Jong Seok, so of course I want to watch it, but the subject just isn't my cup of tea. Sadly.

The things we do to support our bias☺️ We should get medals! Having said that though I just couldn’t go there for Ordinary day because it would have had too much impact on my peace of mind so I had to let that one pass me by. It was a tough decision as Kim Soohyun doesn’t make many dramas so it will be a long wait for the next one.

Oh, I was in the same boat with Ordinary Day. I feel your pain

But Kim Soo Hyun was so, so good in One Ordinary Day, his best project to date acting wise. Episode 1 has you on the edge of the seat, feeling all the emotions he’s feeling.

LJS is my bias so I have decided to just watch it and probably finish this drama no matter what. Probably going to watch only his scenes if this drama turns out to be bad. I miss LJS too much
I actually want to see him in thriller more but not with these writers and not in this project...

I do hope it gives him an opportunity to stretch his acting muscles. As mush as I love him in adorable doofus mode or rom-com noona-killer, it is nice to see him trying a different role (even if I may not personally be drawn to it). Silver linings, you know?

I personally think LJS doesn't suit romcom even though he is good at building chemistry with his partner
I believe riabb is a romcom and somehow that was his weakest performance for me.
I prefer to see him in different roles too but i kinda want him to stay out of legal dramas. He has been doing it for a while because at this point, the only role he hasn't tried yet is a judge.
I'm curious to see him in coming of age dramas

He has done coming of age theme, but it was a movie with Park Boyoung

Waiting for this one. Trailer looks so good n the vocalisation got punch.

The cast, ahhhhh and then Yoo na. I'll try this, maybe she will surprise.

I was so freaking excited for Lee Jong-suk’s post-military drama. He’s one of the OG actors I liked when first getting into kdramas and as these shows keep insisting on and on, you never truly forget your first love (source???). No matter how many mediocre law shows he insists on doing, I will insist in struggling through them.

Aaaand then Yoona had the FL. Sorry to her stans, but I like her in SNSD and SNSD only. Overjoyed as I am about their August comeback, I am firmly NOT joyful about her return to acting. Something about her performances just never work for me.

So uhhh, in conclusion, idk man. Maybe LJS should play more sexy authors instead. I’m down for that.

You just said all things i have in mind about this drama and the female lead that i don't know how to put it to words. Thank you!

Can LJS play a sexy character? Honestly even though he is my bias, i never found him sexy😂

In everything before RIABB he wasn't/didn't look old enough to convince me he could be sexy (or a lawyer 🙄). He had some good suddenly-all-grown-up-and-hawt moments in that, although I disliked the OTP for a whole bunch of reasons and that kind of spoiled the newfound sexiness for me.

Even more than a drama where he's not a lawyer, he needs one with a hairstyle that doesn't hide half his face.

Well, I was a teenager for most of LJS’s dramas, so suffice to say, I did not require much to be completely shallow about an actor’s looks. I’d like to say I have more sophisticated tastes now, but who knows 😂?

Absolutely agreed that he reached new levels of hotness in Romance is a Bonus Book. As for bad hairstyles, what’s new? Male leads with bad hair is as ubiquitous as subway PPL around here.

Yoona reminds me of Louise Belcher's saying "If she was a spice, she'd be flour.".

In flour’s defence, it is at least a key ingredient in many tasty treats. Yoona, on the other hand, actively ruins whatever show she’s in with her limp presence. So as far as spice metaphors go, to my South Asian self, Yoona is that annoying clove that gets in your mouth and ruins an otherwise perfect meal.

@songxrising: This is such a great line. Thanks for mentioning it!

That is a very odd trailer. It doesn't really match the description and gives the visual impression that the drama takes place mostly in a prison and there are no female character worth a shot of screen time.

It's the quick change from comedy to noir (?) that throws me off.

I think they can't reveal much about their female characters for now because of spoiler?

Idk. I'm trying to be optimistic here. They must have important roles other than someone's partner in the drama and they want to surprise us, right?
....right?

I dunno, I'm busy watching Jung So Min stealing the screen from a half-dozen male characters in Alchemy of Souls!

Totally watching it for Lee Jong Suk,missed him a lot...Not really a fan of Yoona...
Curious if MBC really lucked as the show was originally meant to air on tvN and we can see that high quality tvN specific...

It was originally TVN and then Disney paid I think 60% of the costs so it could assert streaming rights. And then MBC switched to being the domestic air-er.

As someone in North America, I'm incredibly disappointed at Disney taking airing rights. They have a terrible track record for airing Kdramas they have acquired here. I've been going over to Disney+ US's site every few days to request Big Mouth; maybe a few others will join me? I mean...it's LJS's comeback! Tons of fans will be waiting.