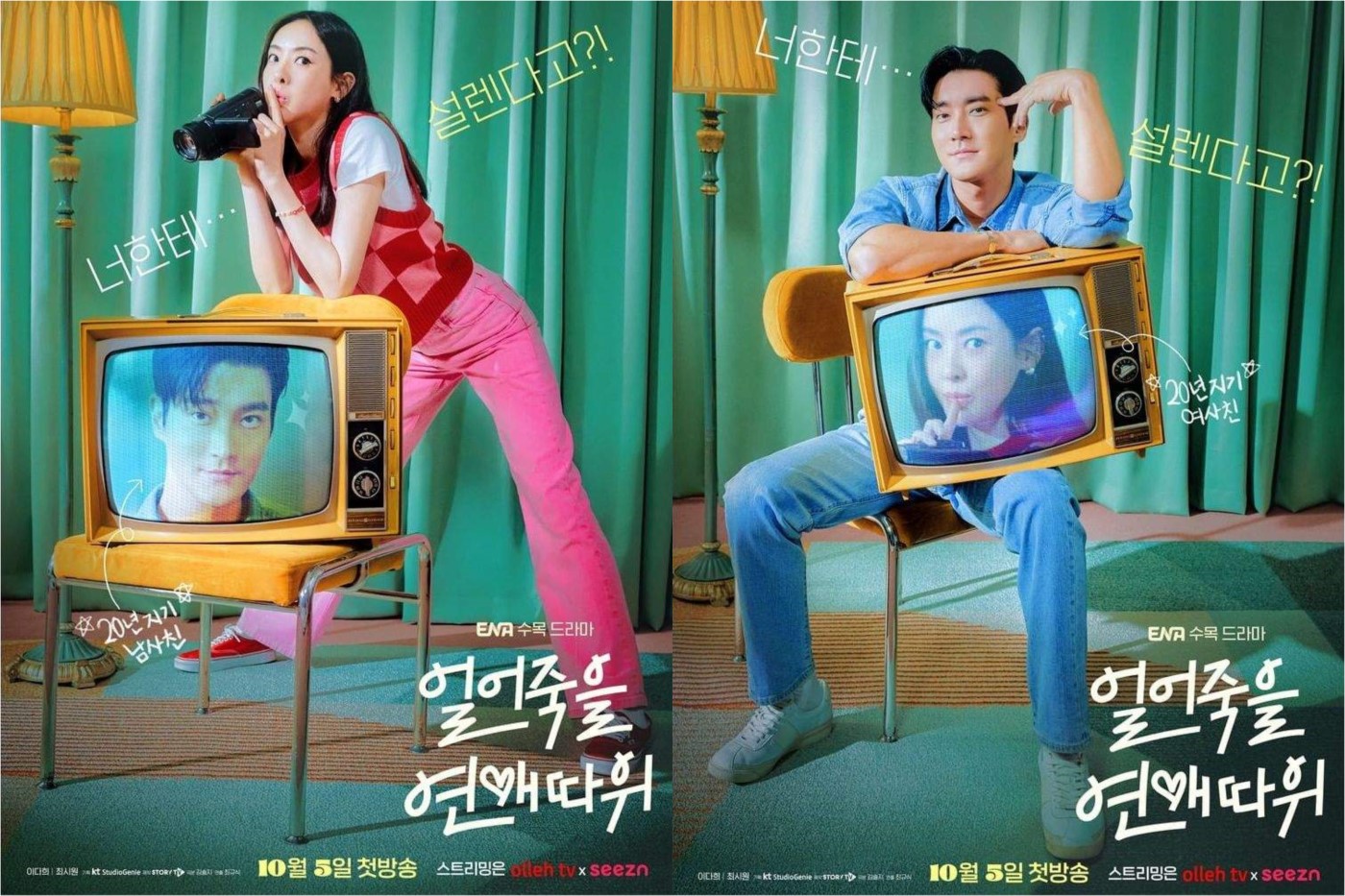 Another round of promos has been released for ENA’s Love is for Suckers, including new character posters and a video teaser of our bickering OTP.

In a classic rom-com set-up, our heroine Gu Yeo-reum – played by Lee Da-hee (L.U.C.A.: The Beginning) – is long-time friends and neighbors with Choi Siwon’s (Work Later, Drink Now) Park Jae-hoon. But their almost too comfortable friendship is about to be shaken, of course, when Jae-hoon agrees to appear on Yeo-reum’s dating reality show and cue the denial of ~feelings~.

The new video teaser begins with Jae-hoon interviewing that he’s been friends with Yeo-reum since high school. She calls and sends a text, cutely asking Jae-hoon to bring chicken feet take-out for dinner, and he messages back: “You can use your finger to order delivery.” We then cut to Yeo-reum’s interview, where she calls Jae-hoon her faithful neighborhood friend.

Updating Jae-hoon on her dating life, Yeo-reum claims that she changed her approach and is going for a sexy vibe. He scoffs that she’s far from sexy, but is taken aback when he catches sight of Yeo-reum with another man. Disapprovingly, he wonders why she’s letting a man into her home at 1 AM and randomly tries to distract himself by dancing to loud hiphop. Enter Yeo-reum who calls him crazy for putting on a show in the middle of the night.

As we return to Jae-hoon’s interview, he explains that Yeo-reum is a variety show PD and worries that her show isn’t doing well. Poor Yeo-reum is trying her best, but continues to disappoint her boss with low ratings. In her interview, Yeo-reum explains that Jae-hoon looks like he’s unemployed, but is actually a doctor – which always impresses people. In the intermittent text screens, we read: “Our once safe relationship is starting to shake!”

The video then jumps to Noh Susanna (Men Are Men) telling Min Jin-woong (Secret Royal Inspector and Joy) that Jae-hoon is appearing on Yeo-reum’s show. Yeo-reum gives the excuse that she was pressed for time and didn’t have a choice, while Jae-hoon garbles his response. We watch as our hero transforms from scruffy to dandy, surprising everyone when he arrives on set. The teaser then closes on Yeo-reum’s conflicted expression when a contestant asks Jae-hoon about his ideal partner.

With writing by Kim Sol-ji (Pegasus Market) and PD Choi Kyu-shik (Hush) at the helm, ENA’s Love is for Suckers premieres next week on October 5.

I'm looking forward to this, bring on the shenanigans!
(and some of that sweet sweet friends to lovers angst 🤭)

Love in Contract didn't work for me.. so really hoping this romcom does!
Lee Da-hee looks gorgeous!

I just might give this show a try. Especially as it includes Choi Siwon being a little goofy. He's always fun to watch in these types of roles.

got to fit this into my schedule! Looks to be fun.