[Beanie Review] Love is for Suckers 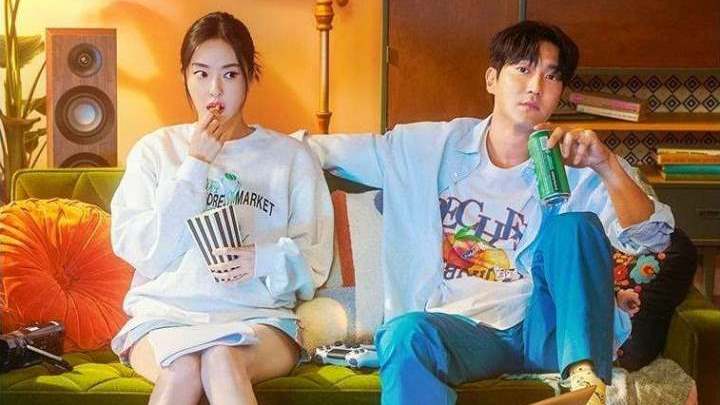 This drama was a great watch for the first 4 episodes for me it was 9/10 funny, great friendships, lovely parents, tension between main leads so all in all everything we love about a friends to lovers rom com, with a slice of life side order. BUT there was a shift in the pacing and storyline and the aforementioned features were buried never to reemerge in their former glory instead there was a 5/10 mishmash.
I would say if you are binge watching make the most of the start and prepare yourself to settle for glimpses of a good drama that never reaches it’s full potential.

I would recommend this drama only because one of the side couples has the best love story I've seen in a drama in a long time. Not only is it groundbreaking but they are delightful to watch (I won't spoil who because I think part of the delight is the surprise involved). Unfortunately, they don't have much screen time. Also, the first few episodes are genuinely good and I think there are some good moments even in later episodes even outside of the side romance I mentioned. I also think that the reality show concept and scenes are fun, to the extent that I wish the show had done more with them. I would say watch it, but don't be against fast forwarding or skipping scenes.

What's Good About This Drama? It's compulsively watchable and fun to talk about, even when it misses the mark, which it does frequently. It has a lovely second couple and friend couple, but know that the former's story doesn't really start happening until quite late in the show. I'll also give this drama points for featuring two leads who are adults, have dated plenty before, and have some mature conversations, at least at the beginning of the show. That is refreshing and appreciated.

What About the Leads? They have chemistry, but it dwindles as the show goes on, which isn't something you want to see happen in a romcom. There's nothing really wrong with them or the actors' performances, either, but despite what should have been a sweet and sexy love scene, the mediocre writing sucks all the life and spark out of these two before they can get together.

What's Not-So-Good About It? I could enumerate this drama's sins but it's probably easier to simply say that the main issue with this show is that it tried too hard to take on too much and ended up doing nothing particularly well.

If It's That Bad, Why Did You Watch All of It? I've asked myself this same question repeatedly and all I can say is that there's a reason this show had some of the busiest discussions on DB while airing. It's quite cracky and even oddly hypnotizing even when it's objectively bad. And that second couple I mentioned is cute together.

Look, there are definitely worse and more boring dramas out there than this one. I didn't hate myself or need a shower after watching. I just wish it had been better, because it totally could have been.

I really liked the first episodes. It was a real and mature romance. However the reality show screwed it up. I felt deceived by the premise.They tried to revive it by the couples of "Kingdom of love" show, but it never got back to where it was. And in final I hated the second FL who was interesting at first to me.
The romance between two leads which was the main plot got lost between other subplots and tbh I didn't care much about them in the end.
I give 7/10

I can get into the most absurd dramas and enjoy them but for some reason I just couldn't get myself the buy into the premise of this show. I didn't buy they were longtime platonic friends, I didn't buy he was a genius doctor having a life crisis, I didn't buy they lived in the big standalone house in Seoul 'because the rent is so cheap'. And don't get me started with the ex fiance. In the past I've been able to buy into the premise of a housecat that turns human, why was I having such difficulty with this show?

Summary : ‘What it could have been!’

The drama had great potential - good leads, decent premise, good side characters as friends, nice family etc and yet the writer just threw the plot out and made suckers out of us.

The drama started out great and even got the second male lead situation cleared out very quickly. The leads were fun and had great chemistry. The male lead was subtly swoony and we were all rooting for them. It was progressing at a decent pace, paving way for our leads to move from friends to lovers zone in an organic way. Instead, we got derailed by a reality show which tore the leads apart, broke their communication, made side characters more interesting, made us sit through an ever-crying second female lead and ended with a totally unresolved leads getting back together scenario.

I could not go further then premier episodes . It was soooo boring , predictable and boring again !

I watched it all, and liked it. Even though the writing was not stellar and the plotting was wayward, there were some fantastic characters. I like it when the characters lean away from tropes and are believably flawed and we see their likes and dislikes and quirks. It was the sort of drama, like I'll Find You When The Weather is Fine (or whatever it's called), where the characters are interesting enough to be rescued from their story so I am happy to rewrite their history in my head, after the actual drama is done.

This is one of those dramas that had exciting pilots and first few eps, but struggled to stay interesting. I was put off by the reality show scenes with all the cringey flexing and beauty shots, but I kept with it because I already invested a lot of time and I was nearing the finish line. Loved Lee Da Hee here, though. It's the first Choi Si-won drama I've seen, and he's not too bad.