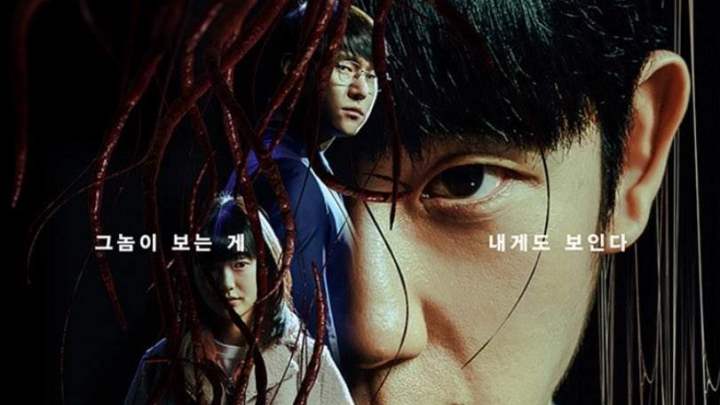 Behold, your Drama Hangout for Disney+ sci-fi mystery crime thriller Connect! We might not be covering this drama, but that doesn’t mean there shouldn’t be a place to talk about it, whether that’s squealing with excitement or piling on the analysis. Or running and hiding under the covers, if you don’t like eyeballs and gore.

Beware of spoilers! This thread is for discussing the entire series.

Since I'm always up for a good thriller, I started the first episode yesterday.

The serial killer plot has potential, but I could have done without those strange effects when the weird tentacles form and heal wounds or organs "grow back together".

I have now finished all six episodes. If there had been more episodes, I might not have finished watching them.

It was probably my fault that I went into this series with false expectations. I had hoped that the focus would be more on the serial killer, his deeds and motives.

This show was bonkers from start to finish.

Originally, I wasn't a big fan of the serial killer plot but it ended up being one of the more interesting aspects to me due to some of the aesthetic similarities to "Hannibal". Sadly, we never really got into our killer's head or learned how exactly he managed to construct his morbid corpse art. For my taste, the Dong-soo/Jin-seob relationship also left much to be desired despite the enormous potential of their strange bond.

I wish the show would have spent more time developing its lead characters and their motivations instead of delivering us a flat attempt at romance and killing one of two show's two female characters in the most stupid and unnecessary way. Why would Sun-hee confront a murderer alone at the top of a tall building? Further: Why wouldn't she make sure that her knowledge got out if (predictably) something happened to her? I also didn't understand why Jin-seob slept with her in the first place despite his previously demonstrated disinterest, thereby letting her invade his precious personal space without any precautions.

If you ask me, the last episode only managed to double down on the stupid. Why introduce Yi-rang's "friend" if he's apparently not even important enough to her to be saved from the building alongside Dong-soo? And how exactly did Jin-seob plan to attach his head to Dong-soo's body without an accomplice present to observe the course of the procedure? I mean, after all, he would have to sever his own head in the process. The music artist as a way to lure Dong-soo out of hiding seemed also a really strange choice because their relationship was developed so little on-screen aside from the song's central importance.

What made me laugh: The discussion between Yi-rang and Jin-seob about how he'd produce a Connect offspring, either with Dong-soo and her body or with her and Dong-soo's body. I also took the "become one" misunderstanding with Z as a joke with homosexual undertones.

Genuinely not sure if this makes me want to watch the show or run in the other direction. Because what even.

LOL this makes me want to continue to watch the next episode to look how bad is going to be.
From the 1st ep, I think it looks like Dr. Brain, a lousy attempt from Apple Tv into K drama.

I'm only two episodes in but I'm being done in by two things: one, how many implausibilities we're expected to overlook and two, the fact that the show hasn't scared me once and I am normally a big baby when it comes to horror.

Kingdom and Sweet Home practically had me jumping behind my sofa. The only reaction I've had to this one so far is laughter and eye rolling over the connect effects which look like claymation to me. To be fair, apparently the director is known for horror comedy so at least some of the humor is intentional (the eyeballs in the dismemberment scene had me LOL'ing) but the horror part got lost somehow.

I also couldn't deal with the weird and outright stupid behavior of the office colleague and sculptor boy. First she shows up unannounced at his apartment (yikes), he just lets her in even though he's a serial killer with evidence all over his apartment, they sleep together and then she wanders around and rummages through his office while he's sleeping (who does that???). Then instead of running straight to the police with the evidence, she confronts on the roof of their high rise office building with only a colleague to help her. Serial killer tosses the colleague off the roof in the middle of the day and snaps the woman's neck yet gets away with it how???

I was also actively annoyed that the serial killer was able to set up these giant, heavy statues with corpses in them on public streets by himself with no one noticing or calling the police on him.

Anyway, too bad because this project had great actors and a well known director but the writing was terrible. Dropping.

Only watched episode 1 and the plot is just too ridiculous for me.

I like actors who are choosing a variety of genres, this really shows their acting skills, and hopefully their next project will be better.

I just finished this, and where to start? I was so excited for this, and while I did enjoy it, I was pretty underwhelmed. For something labeled sci-fi and horror, it was really a gory thriller without much of either.

The good: The premise was cool, if a bit derivative (as others have mentioned, the similarity of the corpse art to that in Hannibal, also the manga Blade of the Immortal had an ML with similar regenerative powers, down to the wormy things - which Takashi Miike incidentally directed the live action adaptation of). The performances were good, the characters were likable, it had good pacing and I enjoyed the visuals - the effects, art, and cinematography. The action scenes were great and it was pretty unpredictable.

The Bad: the writing felt very sloppy, and the characters tended to abandon logic to move the plot forward. Others have mentioned the killer's interactions with the female co-worker, but also the detectives - they were pretty much all incompetent except Officer Nosebleed, but even he was pretty slow on the uptake (like, if Ha Dong Soo were the killer, why would he consult an astrologist about the dates of his own killings after the killings, or ask about the meaning of his own signature after he's already used it?) Interesting concepts weren't really explored, while others I felt beaten over the head with (like how many times did we really need that flashback of him as a kid?).

That said, it was a fun drama, and I don't regret watching it. Despite its missteps I was entertained the whole way through. The ending and unanswered questions screams 'Season 2' and I would totally watch it, though I know now to manage my expectations.

I’m not watching this but was wondering how interesting it would have been to have a premise - without the serial killer, tentacles and organ theft - of a new kind of human who can grow various spare organs in their bodies and hence have the ethical dilemma of to whom they want to donate and why/why not. They form connections with these people and to me it woukd have been so much more interesting.

I can’t find it on YouTube anymore, but you’d enjoy a Dutch reality tv show called The Big Donor show.😊 The key is to watch it first without knowing anything about it, but it was made in 2007 and it seems to have been removed from the interwebs.

They don't grow spare organs though, which is what made the interest of the organ harvesters perplexing. Why would you want to harvest the organs of somebody who can't die and will relentlessly hunt you down to get the organ back?

I like your idea though, although I imagine the ethical dilemma would come from society's treatment of them. It wouldn't be long before they'd be locked up in organ harvesting centres forced to donate and regrow organs forever.

@leetennant: It is indeed perplexing.
And, you are justifiably far more clear eyed about the human capacity for brutality than I appeared to be. These unique individuals once discovered will be hunted, abused and detained. In trying to avoid capture, abuse and detention by these dystopian harvesting centres, a a morality test of who is prepared to risk their life to help them.
My original idea hoped to exist in a space where they were as yet undiscovered and somehow could pull the wool over the eyes of the medical folk about their bodies regrowing organs.

I love this app

I tried. But I couldn’t watch. Episode 3 and I couldn’t care less about any character or am not even intrigued about their past, how they became like they are or why. Nice try, but as someone mentioned before, it feels I’m watching Doctor Brain again, and I already committed that mistake. Drop on episode 3 for me.