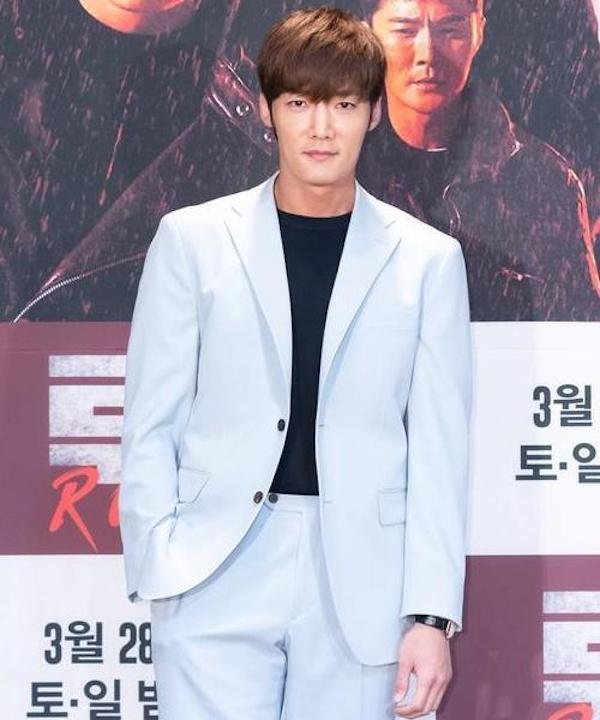 Just coming off of his OCN action-crime drama Rugal, it looks like Choi Jin-hyuk may be returning to us with a new drama called Zombie Detective. It’s been reported that he’s been courted for the lead role in this upcoming KBS drama, as the CEO of a private investigations firm.

When he turns into a zombie, he loses his memory and goes into hiding in the mountainside. He humbly decides to accept his fate as a zombie. In order to survive, he adjusts his gait and speech pattern to resemble a human, and he even learns how to bleed realistically. (But no details yet on how he’ll stop his limbs from rotting and falling off.)

After four years of hiding, he comes across a corpse without friends or family, and decides to take on its identity and return to the human world. It turns out that the corpse is the head of a PI agency, and the zombie begins to solve mysteries in order to fit in with his new identity.

It’s not clear yet whether or not this will lean towards comedy or darker in tone, but it would be nice to see Choi Jin-hyuk take on a role that lets him use his action skills while showing off his comedic timing.

KBS drama Zombie Detective is currently being written by Baek Eun-jin (Heartbreak Library), and will be directed by PD Shim Jae-hyun (The Producers).

This is was my exact reaction. WHAT????

Will have to protect our 👀!!

Soooo, similar to his most recent drama, Rugal, then. ;)

Maybe this one will be intentionally hilarious.

There's going to be so much angst. He'd probably eat himself to starve off his hunger for flesh. Discreet little bites so as not to spark suspicion. Like his middle finger, first. Then his big toe. Butt cheeks in Episode 8. His b*lls in Episode 12. By the time the last episode rolls in, only his head with his emo hair is left. In the final scene, @wishfultoki plays a wistful piano piece while camera cuts to CJH sadly eating his brains. The end.

o.O
This would be my first cameo in a zombie drama...

I almost fell from my chair with your comment! So funny!

Gosh, this is so funny!

Is it just me or anyone else is also finding the storyline somewhat unusual, unbelievable? Zombie solving murder cases? I'm speechless, don't even feel anything. I think I'm dead inside. 😂😂

Watch the Canadian show iZombie about a coroner zombie who works with the police to solve murders. Seriously, so so good.

Actually I'm a kinda little scared!! I hope they won't use too much scary make up. Still will wait for beanies comments!!

Oh yeah, it was really a fun show. I think it became too weird in the last seasons.

But it was really fun to watch her cook some brain :p

The food puns each week were so good. Half of the fun of each episode was working out how her meal was related to the case.

I was gonna say, this is hardly the weirdest Zombie premise out there lol

Ok, I have to ask, what is the weirdest Zombie premise you’ve heard?

Thanks, but then I was reminded of movie World War Z and all the Horrible memories, and that made me scared! Probably this genre is not for me??

Well i guess i'm happy seeing him being so busy and demand...The premise sounds intresting and done right could be a suprise...Guess the zombie here don't loose their mind or will he be the special case...Can say i'm curious what they will bring new to it...Guess he'll have fun with all this different roles rather than the usual CEO...

*runs and hides* haha actually no, this could be a riot - who knows!

Zombie CJH is going to have a hard time keeping his eyeballs in his sockets this time.

Please, be the one. I cant wait @missvictrix

Are you stuck in a groundhog day/sliding doors situation?

The first step is admitting you have a problem...
The second step is to hire someone to choose your projects.

When it's this bad I suspect that he's in a Bad Contract or turned down someone high up's sexual advances so they're giving him terrible projects. I am serious about this.

I really hope that isn't the case O-o

Yes, I find it very odd how he has starred in some pretty big shows and is now being offered dramas like rugal. Also surely he would be promoting his own shows more on variety channels or being involved in other projects?

Hahahahahaha! The description is so weirdly funny.

This can be and should be a comedy! Don't go serious zombie mode, show. Maybe CJH wants to show his comedy chops. He's been taking serious roles most of the time~

In my opinion, 98% of zombie flicks should be horror comedy, and several of the best ones ARE. So. Yes.

@leetennant would love this. She loved CJH in Rugal.

Your job is to torture me, isn't it?
This is revenge for the Oppa Law.

Anyway, this sounds awful. I hope we all watch it and that @missvictrix is forced to weecap it too.

@missvictrix is in the throes of the Owfulppa Syndrome. Oppa is so awful - awful acting, awful hair, awful lines - but the awful just sucks her in. And next thing you know, she's bent over the laptop, possessed, typing, typing, typing... It's terrifying.

So essentially it's CJH that owes me the shoulder massage for being hunched over the laptop for days? I'm game

He needs to keep his emo hair. Cover the loose eyeball. Huuu

Now it all makes sense :D

I’ll just say one thing: at last! A drama starting with Z!!!

No, thankfully we don't!
Also what's equal parts eery and amazing is that @sicarius literally called out a similar name for drama z, Zombie Prosecutor and now we have Zombie Detective atleast. You might just be reading dramabeans, drama gods but not everything is supposed to be taken seriously.

Choi Jin-hyuk was lead in two of my all time favorites PRIDE AND PREJUDICE and TUNNEL.
What happened? How about P&P 2 or TUNNEL 2?

I'm still laughing at this synopsis, this is what I needed to read today.

Jokes aside, he clearly deserves better.

Okay now I just feel bad for him.
His drama choices are just getting weirder and weirder by the second.

Minus the crime angle, this sounds like the Nicholas Hoult movie "Warm Bodies".

Warm Bodies was a wonderfully written re-imagining of Romeo and Juliet about the way in which war dehumanises us. I don't see the parallels in this description myself.

depends on how you want to describe Warm Bodies though, you could also say “it’s the love story of a human and the zombie who ate her boyfriend’s brain” which sounds just as weird as this does 😅

The humor with the zombies who were so slow in their airport was so funny.

I was thinking about how Hoult's zombie character comes back to life. I'm not a big zombie movie fan but that was the only time I ever saw a zombie become human again.

Yes the zombism was a metaphor for how war dehumanises us. Thus he literally regained his humanity at the end.

14 bebeswtz❣️Xiao Zhan is my happy virus

Is this going to be one of those things where zombie doesn’t actually mean zombie so much as zombie-like but is actually caused by some terrible (but ultimately curable) illness? That’s the only way this plot makes sense to me.

The synopsis I read in another site made it sound more comedic. But I am intrigued at what other weird drama he can get himself into. So I will definitely watch if he accepts the role.

Someone get this poor man in a Rom-com pleasee

This is a rom com. With crime and zombies.

I loved him in P&P and TUnnel. I saw someone saying that he has zero emotional response but I think he is quite good with the right dramas.
Even his last drama where he was a defense lawyer was still watchable. But what's with Rugal and now this one. I can imagine RUgal being good at least on paper. But this. OMG

I thought he was soo good in devilish joy, tunnel, P&P, and justice. He was one of the few actors that managed to catch my attention in recent years. But then he choose to play as that weirdly written character in last empress, going on to rugal which is now his worst drama in his filmography, and finally this weird drama with a questionable plot....

So zombies are taking over dramaland this year? Yay.

I think I'll just watch the first two episodes of GU FAMILY BOOK instead. Forest gumiho who becomes a raging demon with mane of glory is much more interesting.

I was thinking that exactly. What is with this zombie trend?!

Kingdom is a big hit. Train to Busan is getting a sequel too.

@wishfultoki I loved him in that role...

There’s this Spanish Song that I love:
My boyfriend is a zombie
He’s a living dead
He came to the living to be with me
My life is at last meaningful
I got my love back
And also rotten hair!!

22 egads aka Dame Maggie is crabby

Did Choi Jin-hyuk lose a bet with the devil and he is being forced to take on the worst and most ridiculous dramas? Or, is there some kind of bad-drama competition happening with kdrama actors (See: Melty, Forest, and Rugal). Or, and I think this is the one, do these Korean actors love all the attention from @missvictrix and are choosing projects so she will write her lovely weecaps about them?

Seriously CJH, I think you have a problem.

Unfortunately, I hv watched all those bad dramas mentioned. I think I got to hv a chkup myself too…. 😅😅

I liked Choi Jin-hyuk in Tunnel but then The Last Empress and Rugal have me questioning whether he can act. I'm not sure this is the drama to change my mind.

So this makes the second time that I have (effectively) called a Zombie drama just days before news release...

Is this some secret superpower I didn't know I had?
Like I know I joke about zombies making everything better (or at least they can hardly make anything worse) but of all the requests for the Drama gods to listen to, THIS is what they pick?
Welp.
*shall we go for a third time in a few years?*

Listen, the only thing we know about zombies is that they need to eat brains or humans to survive, that they are slow and they are 'zombie' like.

This drama sounds like they will add more to what zombie is supposed to be. So far as it is believable fantasy, it sounds good to me.

Why do we have to believe whoever made up the first zombie characteristic anyways.

It is like vampire stuff. The only thing that has stayed the same about them is that they have to drink blood to survive and that they are immortal. Other than that, they got very creative about vampires - they even made them shimmer in sunlight.

So, perhaps, this zombie does not have any rotting parts.

He is one of the best kissers on screen, so I guess as a Zombie there will not be too much of that going on! 😔 Do a rom-com please!!

I'd much rather watch Vampire Prosecutor 3. That story actually worked and we're still on a cliffhanger... TT_TT