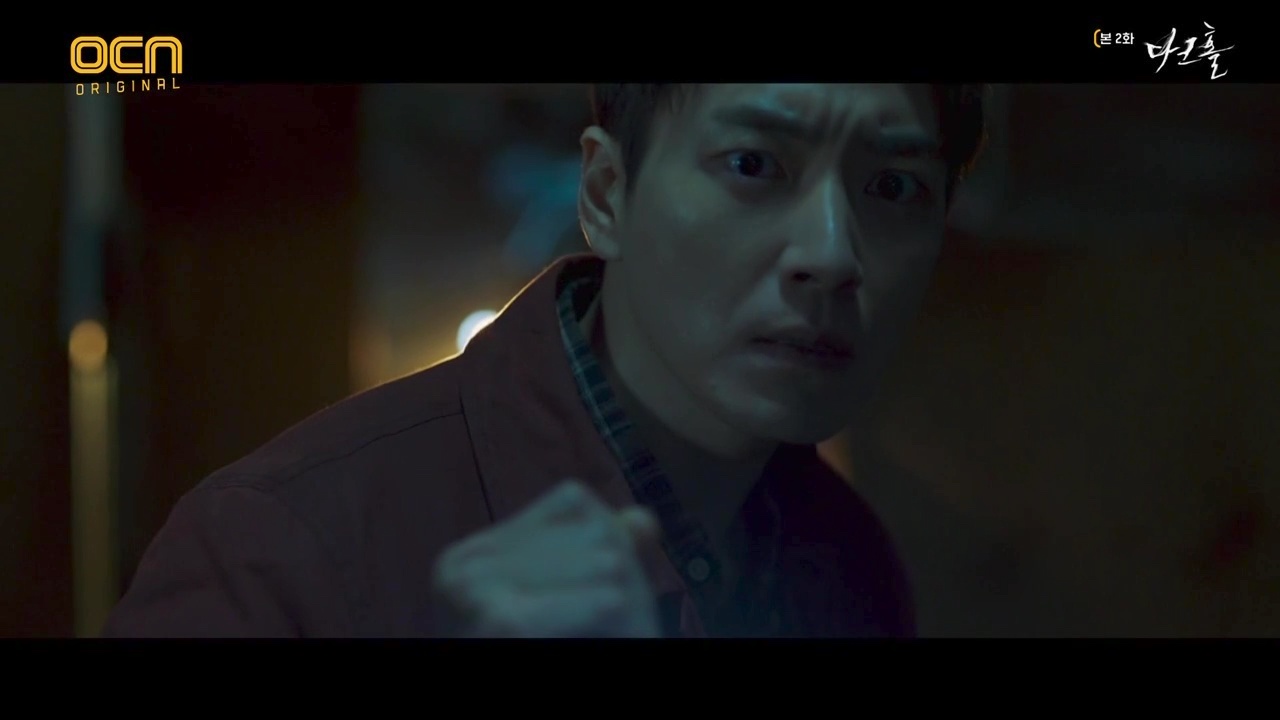 Ready to jump into a Dark Hole? OCN’s latest thriller is just that, in all senses of the word. It’s creepy, it’s confusing, it’s full of characters and their demons, and you feel like you’ve been pushed into something you don’t understand. Thank goodness for Lee Jun-hyuk, his shotgun, and the energy he brings to the screen. He makes the darkness (and the plot chaos) worth it. 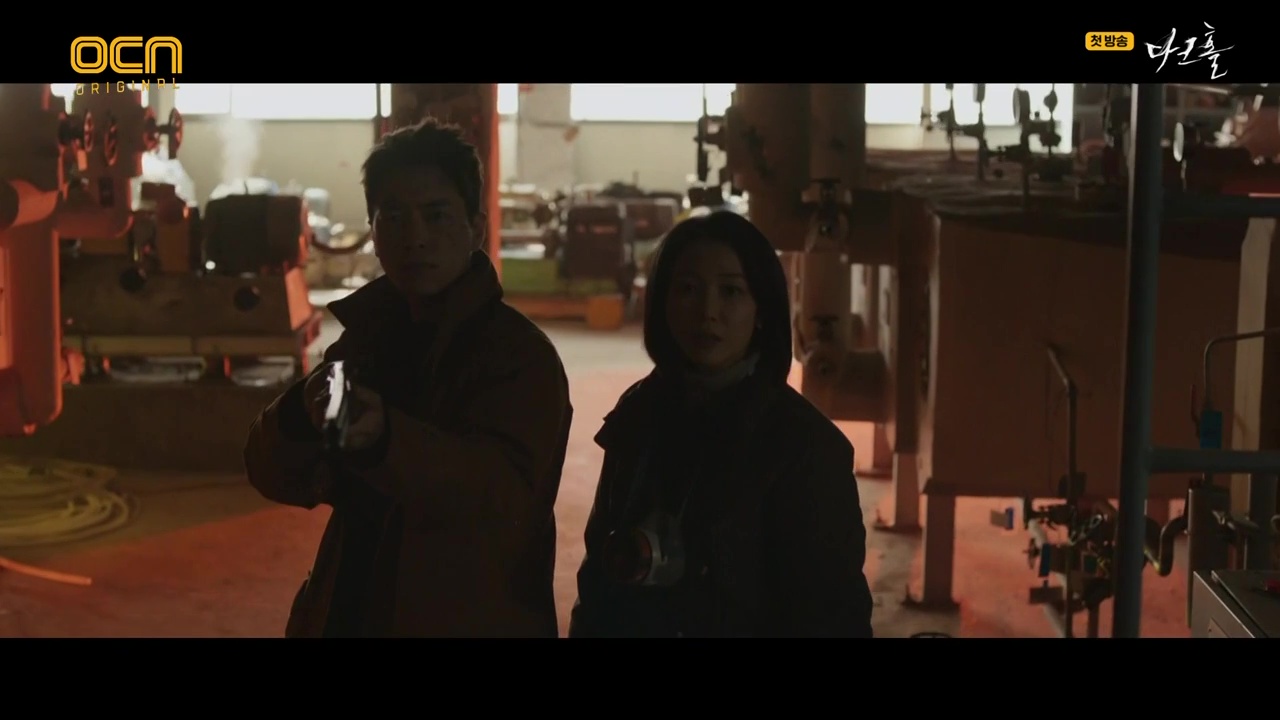 If ever there was a premiere week that seemed to start five different dramas simultaneously, it was Dark Hole. They weave together eventually, but to start, it’s a lot to piece together.

Take some supernatural elements, some horror, several murders, a disjointed storyline with time jumps, a team of cops, a shaman, a bullied teen, a lone reporter — oh and a serial killer, too — and you have yourself the premiere week of Dark Hole. Let’s jump in, shall we? 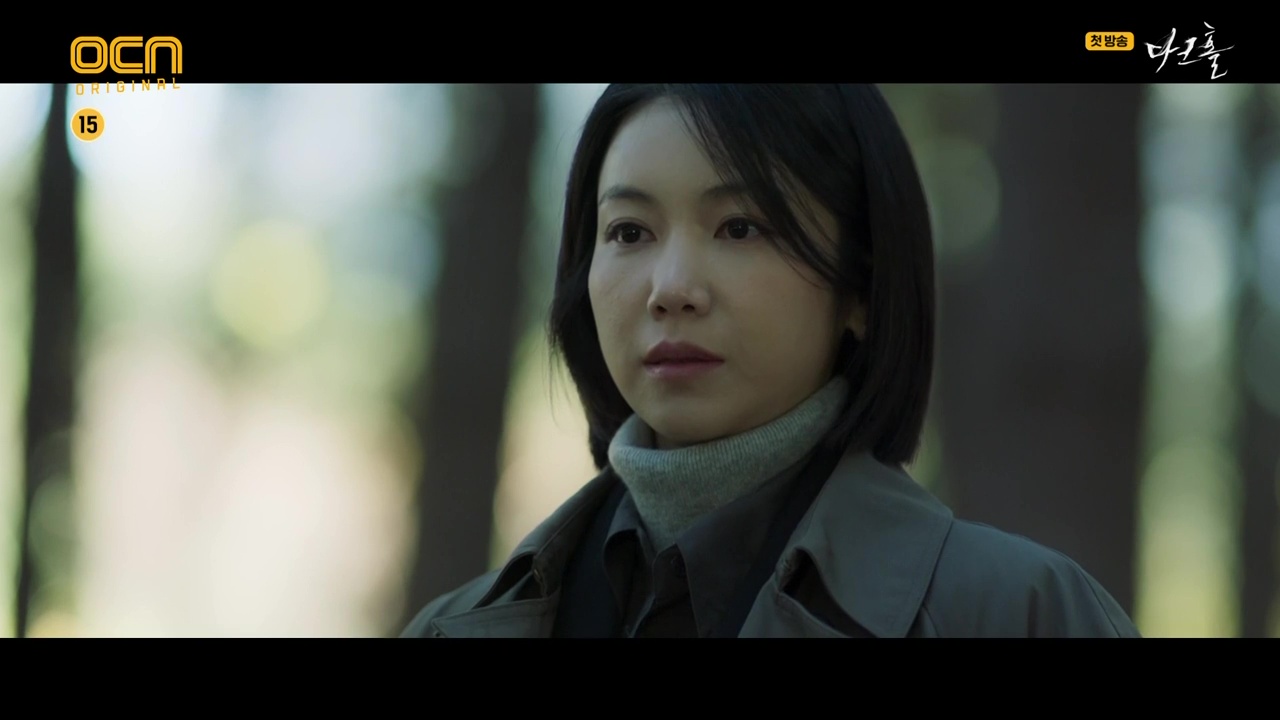 We first meet our hero and heroine in the thick of it: there’s a creepily lit furnace room of sorts, a diabolical snake-like monster, and a fight for their lives. But the real story begins before all of this, so we take a step back in time and meet each of our characters before the apocalyptic chaos.

Our heroine is LEE HWA-SUN (Kim Ok-bin), a strong and resolute detective who’s also deep in grief. Her husband was murdered by what seems like a young woman that he was trying to mentor. And not only that, but the murderer also happens to be a psychopath killer who plays games with her victims, and even after the crime, toys with the family left behind (viz., Hwa-sun).

As with most OCN dramas, Dark Hole is darkish, moody, and stylized. It works particularly well for parts of the storytelling here, though — like when we see Hwa-sun come home from work to her husband cooking dinner, and then the scene darkens, he disappears, and she’s alone in her grief. 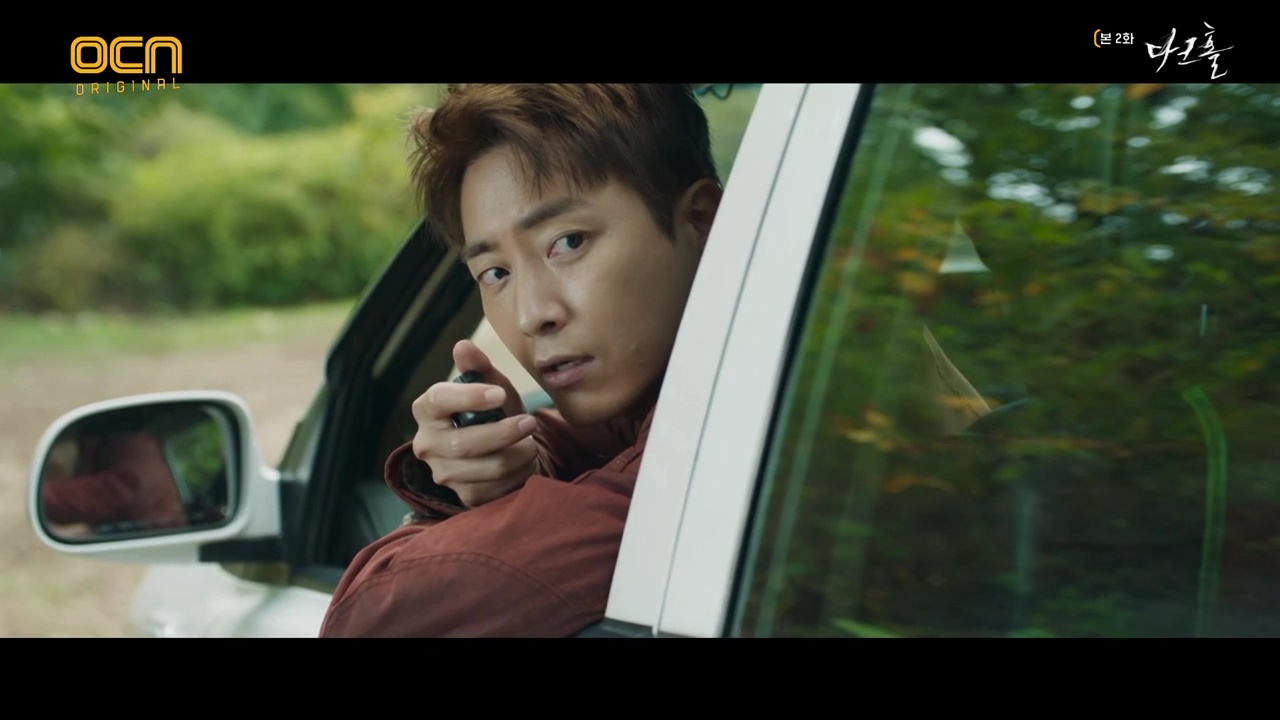 Hwa-sun’s story is the main backdrop, but we also meet our hero early on, though we learn less about him. He’s YOO TAE-HAN (Lee Jun-hyuk) and it’s hard not to love what we see. He’s fearless, funny, and also really heroic. In a strong scene of early exposition, he races against the clock to save a woman from an about-to-torch car. Admittedly, it’s hard for me not to love a performance by Lee Jun-hyuk, but I really like him here as this rather quintessential action hero that’s hard not to wish you had in your corner.

Tae-han is something of a freelance investigative journalist, and he seems to also have a nose for trouble, which is kind of how he winds up meeting Hwa-sun. His friend and business partner is one of the first victims of the strange event that’s lurking in a nearby forest, and he meets our heroine under creepy circumstances. 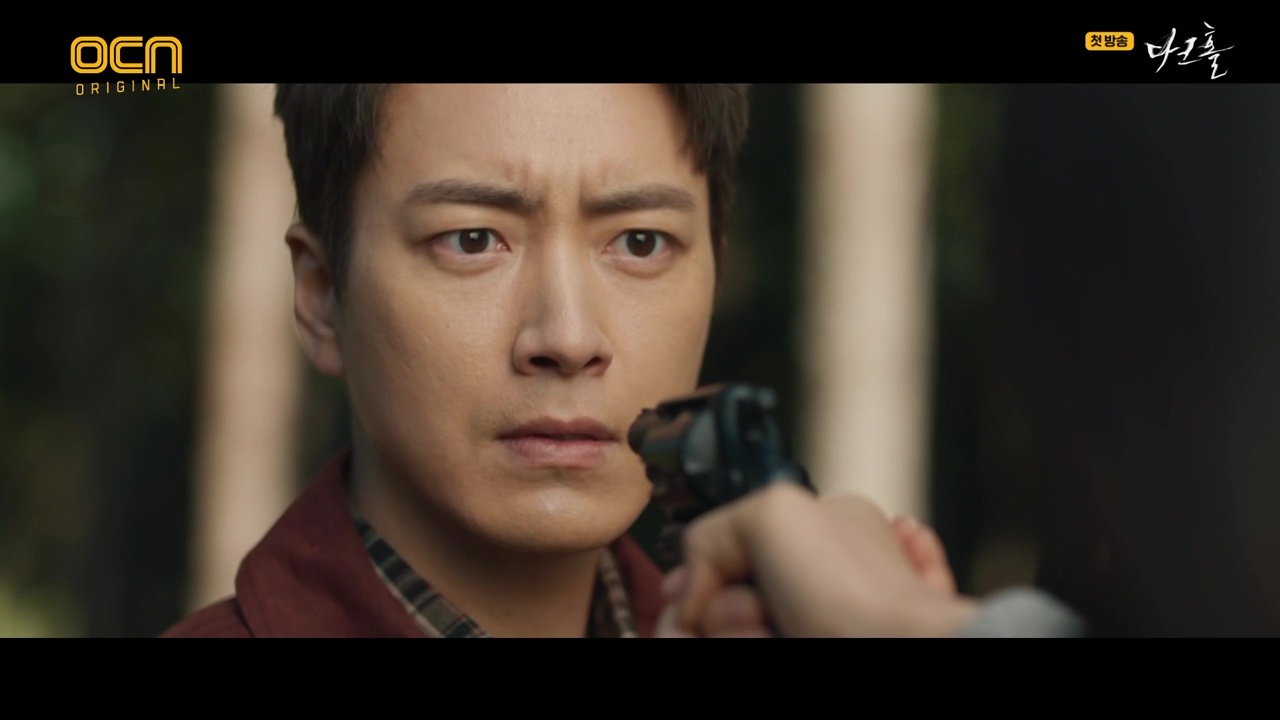 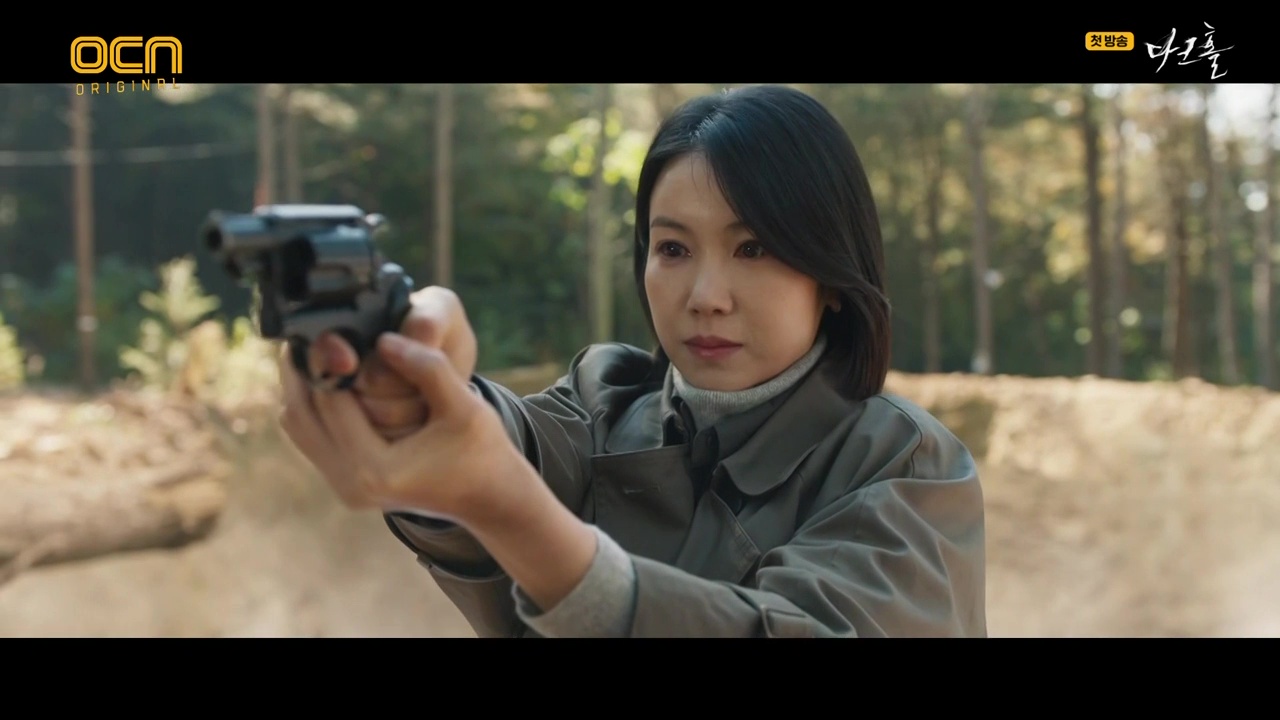 But first, a word on the overall setting, which is actually what starts to bring the plot together (finally) at the end of Episode 2. At the crux of it all is a mysterious sinkhole that appears in a big plot of land outside the neighborhood where the drama mostly takes place. Early on, it’s Tae-han’s friend that roams too close to the sinkhole and starts exhibiting psychotic + homicidal tendencies.

Then, not much later, when Hwa-sun is investigating, she too nears too close, and is “overtaken” by whatever the hell the drama is trying to evoke with the evil black CGI mist. It’s silly in one sense, but the essence is there: a darkness takes over these characters (signified by their eyeballs turning black) and then they’re haunted by hallucinations of their worst nightmares or fears. Soon, this basically turns them into raving zombie-esque lunatics. 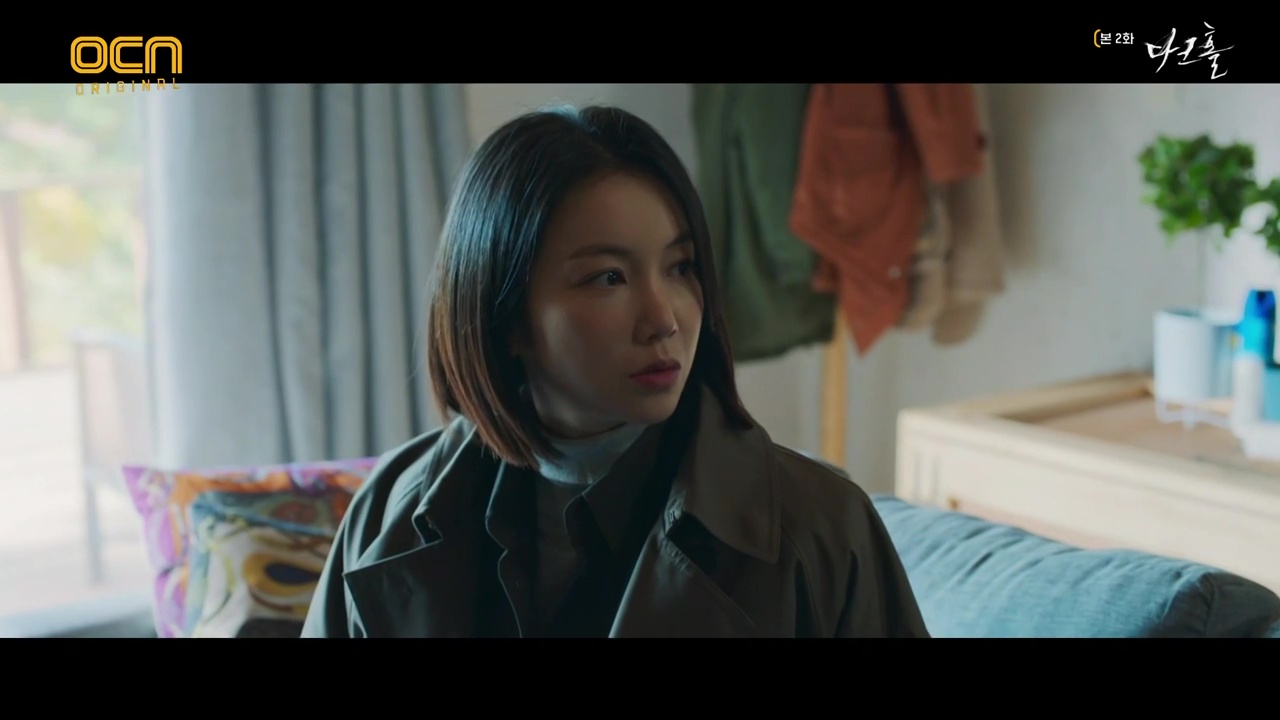 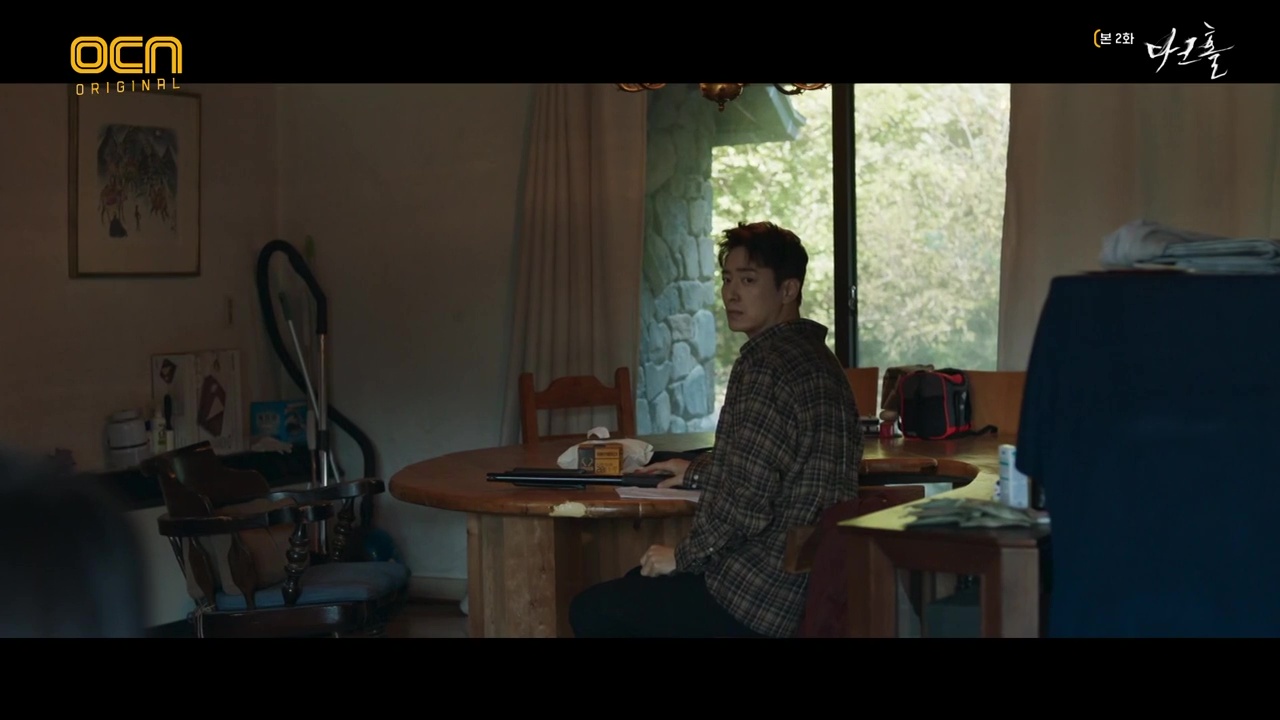 During the premiere week we also meet a lot of side characters that either find themselves near the sinkhole, or infected by it. It’s practically more characters than one can keep track of, but by the end, the common denominator is this: we land in absolute chaos. Hwa-sun and Tae-han are back in the city, and it looks like nothing short of a zombie apocalypse, with all the “infected” characters wreaking havoc.

It’s the beginning of the end, but it’s also the beginning of the drama, actually, since it’s where the real meat of the plot begins. This is the reason it’s a bit hard to judge Dark Hole and the compellingness of its tale so soon — because we’ve only gotten the situational setup, not a sense of what the actual story will be. 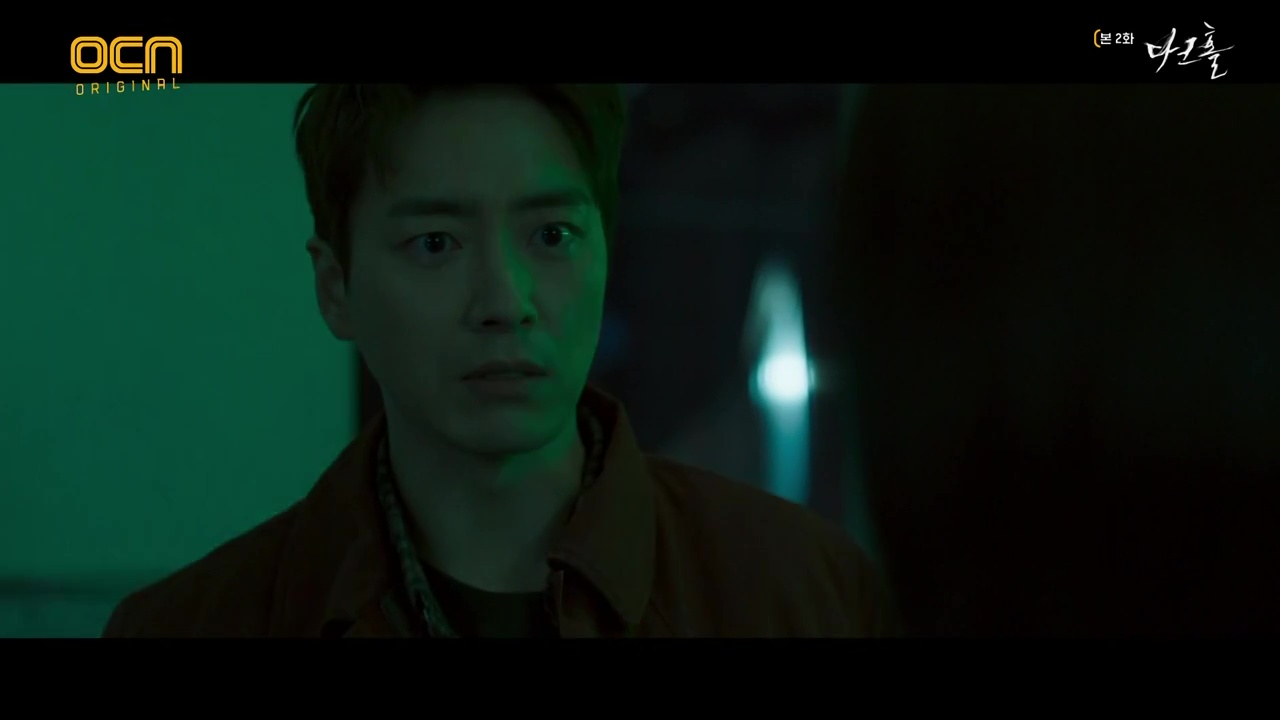 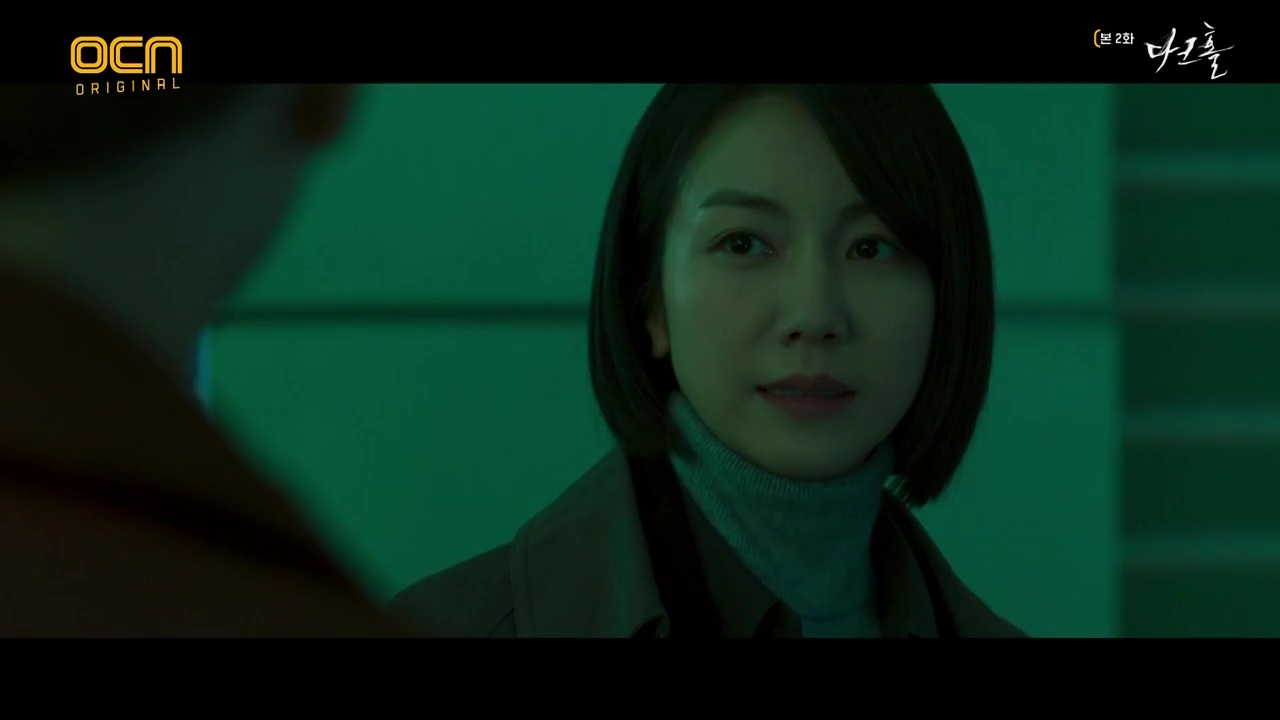 Working to the drama’s advantage, though, is the fact that Hwa-sun and Tae-han seem primed and ready for the partnership we got hints of during the drama’s opening. I really like what we saw of them when together on screen, and if the drama will continue to ride off this, it will definitely be an element to enjoy. I not only like their characters together as foils, but also liked them as co-stars.

The other boon here is Tae-han and his sharp-witted ability to already start stitching together what’s happening to the citizens, and how it’s related to the sinkhole. After observing what happened to his friend, he’s confronted with the same in Hwa-sun, and it’s not only a fun but well-paced portion of the story where he’s putting the puzzle pieces together. There’s a long way to go, but clearly this is the guy we want leading the story, and I guess that’s a good place to land after a premiere.

In conclusion, Dark Hole is pretty chaotic, with gobs of setup and side characters that make you lose the focus of the story a bit. But, the drama also has some strong moments that make the genre work and the characters pop. Don’t go into Dark Hole expecting a groundbreaking horror-thriller or anything — but perhaps a more mediocre drama with some fun moments and a good hero might be on the menu instead? 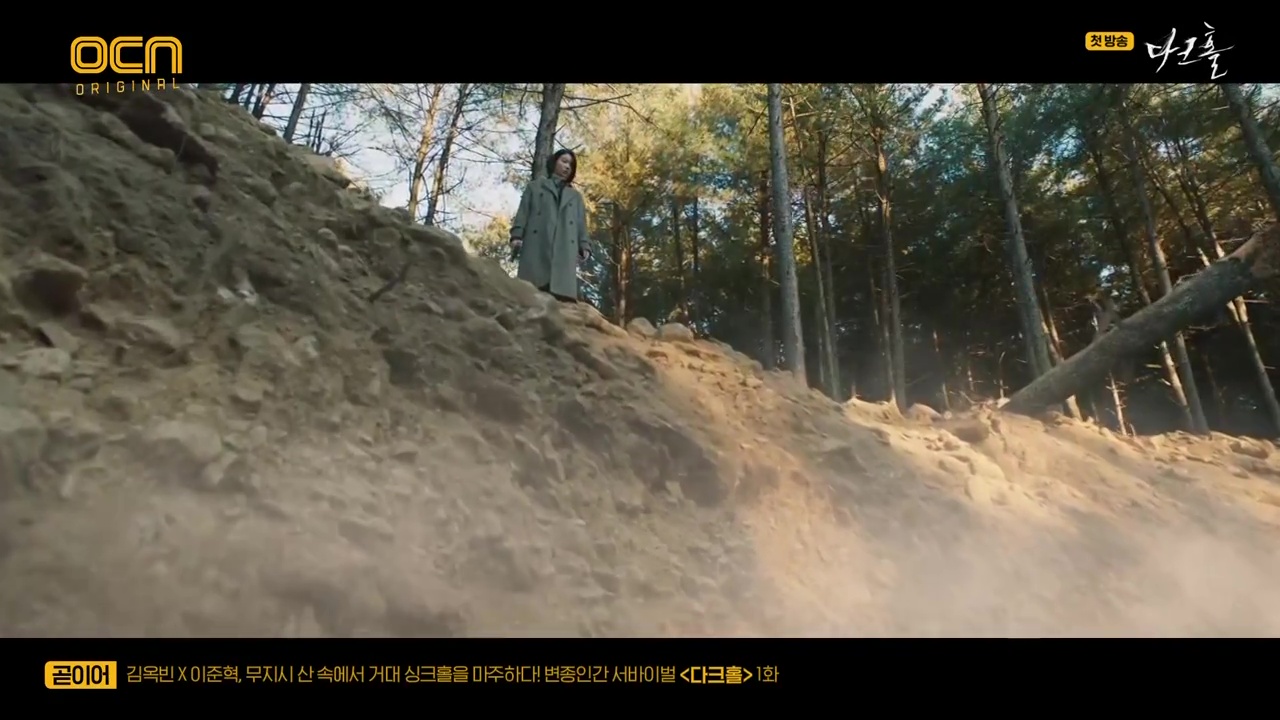 I was really excited for this drama when they started in the middle of the action. The flashbacks turned me off it though. So I only finished episode 1.

I got half-way thru day 2. The fact that it took me until mid-afternoon today to get that far was officially a sign.

a darkness takes over these characters (signified by their eyeballs turning black) and then they’re haunted by hallucinations of their worst nightmares or fears. Soon, this basically turns them into raving zombie-esque lunatics.

Communist propaganda makes more opportunities for individual responsibility and a better life for the most people?

Despite Lee Joon Hyuk, and despite it being a thriller, I'm not even trying.

It's rarely the one of K-dramas that simultaneously aired via TvN and I saw on Dark Hole's Wiki page that it's true to aired on OCN and TvN at the same timeslot. I wondered if Dark Hole ratings will help to gain overall ratings that combined both networks.

@db-staff On "Prime-Time Shows This Week", we want to put OCN and TvN on Dark Hole section instead of only original network (OCN).

I raised that question about combining the ratings in Sunday’s “Ratings Report”. Seems to me the ratings should be combined.
This is also the first time I can recall seeing an OCN drama simulcast on another network (tvN).

First two episodes were chaotic with too many things thrown in together. It was quite silly and full of shoddy CGI but it moved quite fast. Things happen at every moment of the show. It might not be ground-breaking but if they keep the same momentum, it has potential to be silly, over the top fun ride.

This show...so much happened and yet, I felt like I wasn't given anything..if that makes sense! Right now, only character I'm worried about is the rookie cop..he better live for his soon to be born child!!

Totally agree with you @oosiee.
In cop shows I am always a sucker for the maknae and one of my rules (for writer-nim) is: “Don’t mess around with the maknae”.
At the end of DARK HOLE expect Officer Zo Hyun-ho breathing happily with wife and newborn.

I’ve watched the first episode, and it was definitely sporadic in topic and tone. I will definitely check out more episodes down the line, but it didn’t grip me out of the gate. Hard to tell what to think after one episode, and from what I’m reading thus far about this one, after two.

Loved it . It was a good set up episodes . It was like watching a Stephen King story . They could be better for organising 'black fog' which is a important part of story but I will skip that part for now . Exciting for future episodes . KDramaland is pretty dry these days :)

This is the second time that after watching the first two episodes of a drama my initial reaction was: “What the h*ll did I just watch!”

The first time that happened was after the first two episodes of YOUR HONOR (2018). In that case it was because of Yoon Shi-yoon’s ‘over the top’ performance/interpretation of the two characters (twins) he was playing.

In DARK HOLE, we quickly got everything thrown at us.
I am not sure how we are going to get twelve episodes of this but we will see.
I enjoyed our leads. As always Lee Joon-hyuk (1984) looks great going casual as a tow truck driver. I am enjoying Kim Ok-vin’s Detective Lee Hwa-sun.
Btw. I still don’t get that Yoo Tae-han (LJH) is a reporter. I must be missing something.
I will be staying with DARK HOLE to the end.

I decided to watch the premiere with no expectations, but as it's LJH, I had to give it a try and... I liked it. I wasn't expecting it because I'm not really into horror and the whole zombie thing is not my thing, but... I liked it, even if I don't have a clear idea of what's happening with monsters, zombies, killers and maybe aliens?

Best way to watch this show is not to think and enjoy commotion happening on the screen. Things happen every minute and you don't get time speculate anything at all.

I actually enjoyed episode 2. Though ep 1 was indeed boring. It kinda reminds of The Mist, not one of Stephen king's finest works but I'll stick through to see what happens. Also if it's drama with monsters I'd prefer this over Sweet Home.

What a strange mix of 80s monster flick, Stephen King novel, and Korean drama elements. I can't work out if it integrates at all, I'm not sure it does. I'm wondering if we have Stranger Things to blame, since many of the elements in this are taken from the same classic 80s scifi, fantasy and horror film sources of that show. But it doesn't have its charm, its genuine sense of menace nor its appealing characters. And weirdly it also doesn't have the usual OCN gloss.