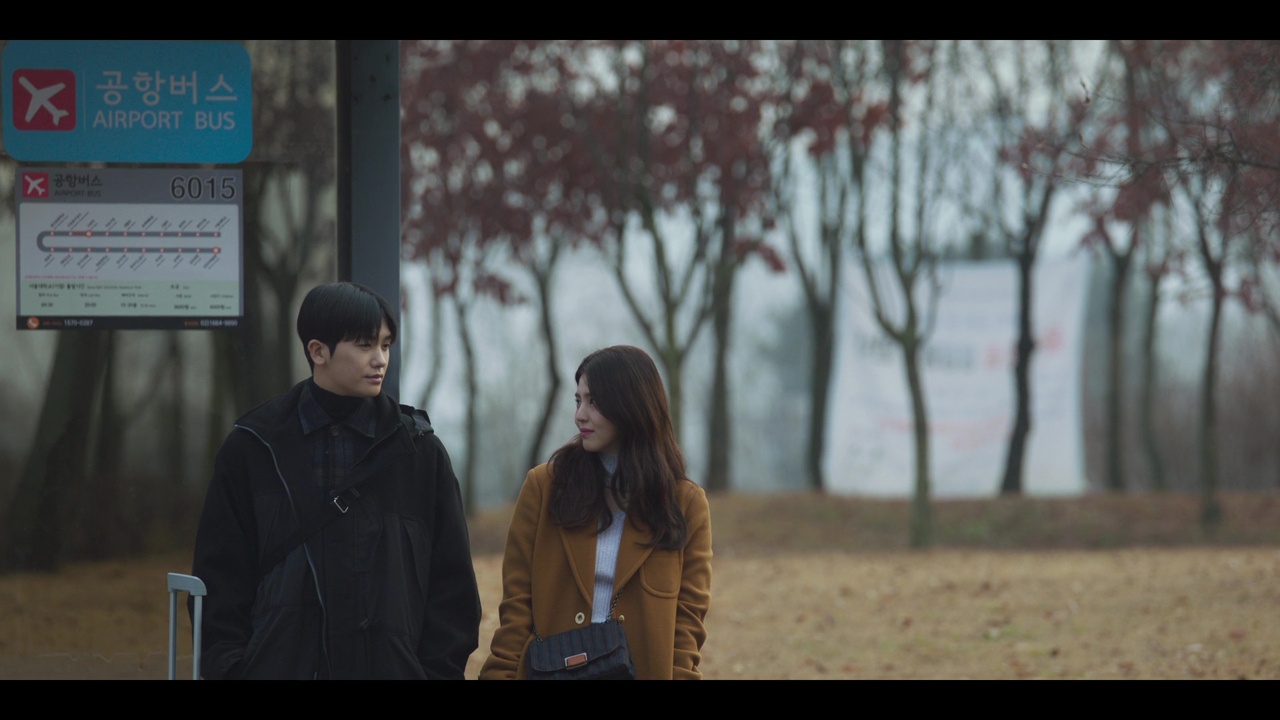 Even as it becomes increasingly clear that there’s more than just friendship blooming between our photographer and lyricist, they remain reluctant as ever to confront it head-on. But either time is on their side, or it’s working against them, because they’re going to have to make some kind of decision a bit sooner than they think… 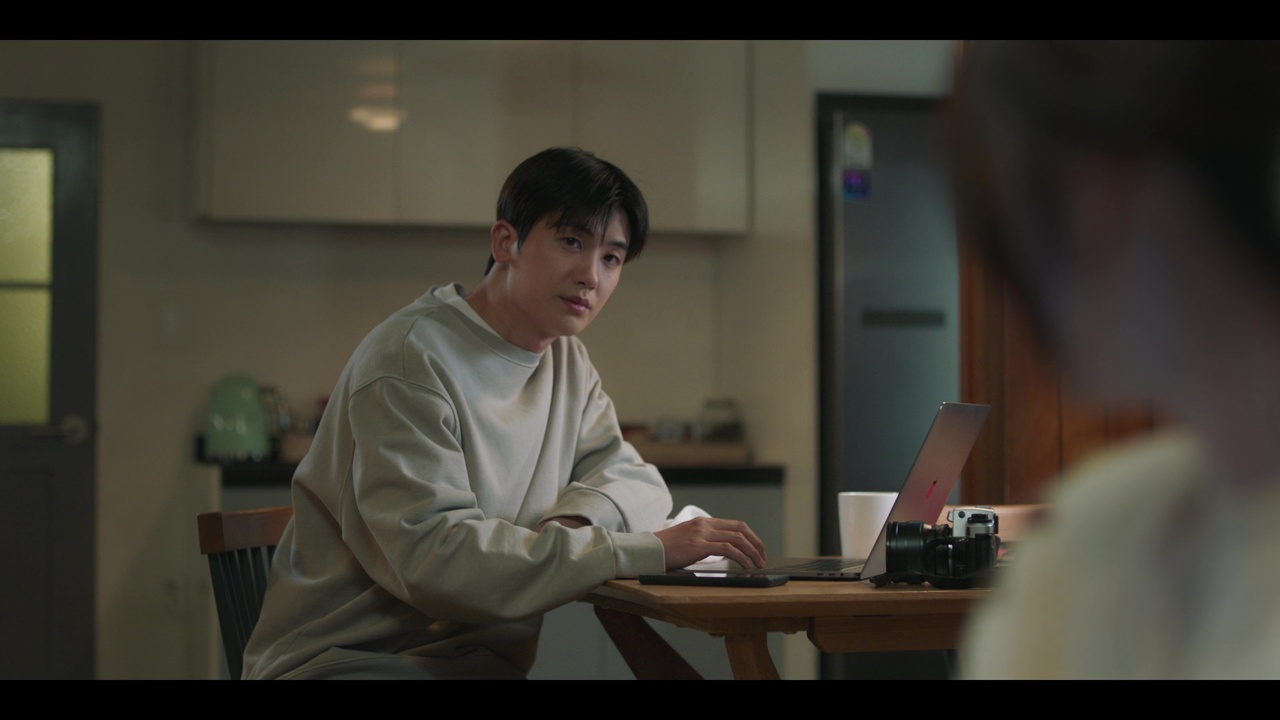 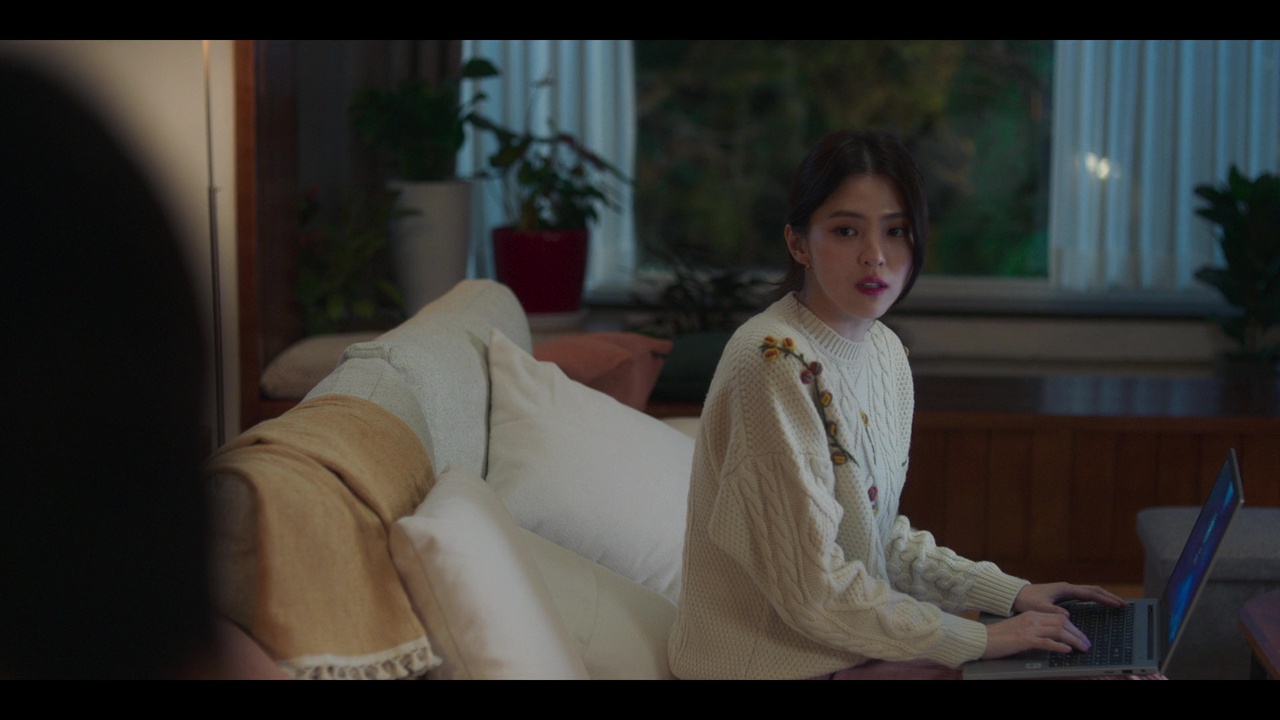 After seeing the photos Sun-woo’s taken of her over the years, Eun-soo starts to put two and two together. She tentatively asks about his unrequited love – when did he first fall for her and why? Sun-woo, not catching on that she suspects it’s her, answers cagily. After a few rounds of questions, he says testily that he’ll handle it on his own, thanks.

But, as we saw last week, these two are quick to apologize with flowers whenever they have a disagreement, and this time it’s his turn to present her with a bouquet and ask if they’re still good (they are). He answers her questions, further confirming her suspicions by saying he’s not sure exactly when he fell in love, but that nine years ago was when he first consciously realized it. 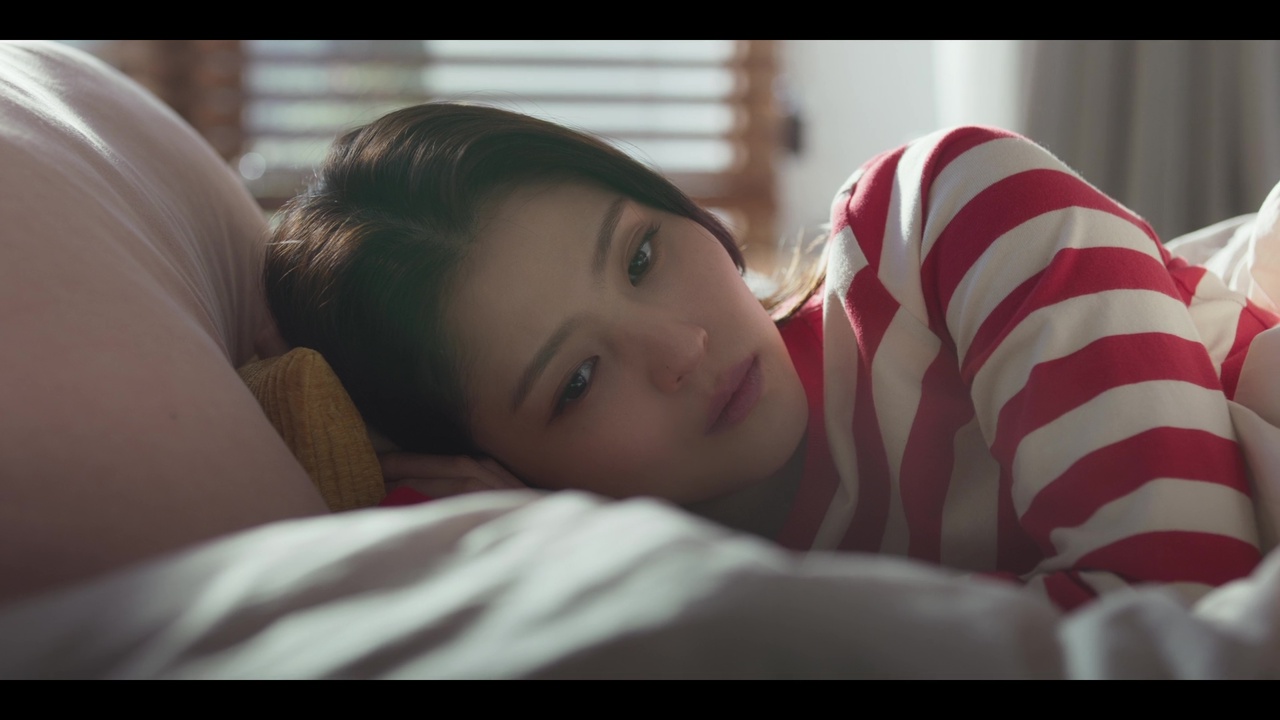 Sun-woo also tells her he plans to confess his feelings… but doesn’t. Eun-soo spends most of the episode getting the confirmation she needs from other people – like their married friends (played by Park Hoon and Park Min-jung) who’ve known for years that Sun-woo liked her – and then waiting for Sun-woo to actually confess.

Meanwhile, they’re each presented with something new to think about. The composer likes Eun-soo’s new lyrics, and invites her to dinner to meet their song’s singer (cameo by Seo In-guk). Then he invites her to a wine bar afterwards (something else she’s too polite to admit she doesn’t like), and things get a bit uncomfortable. 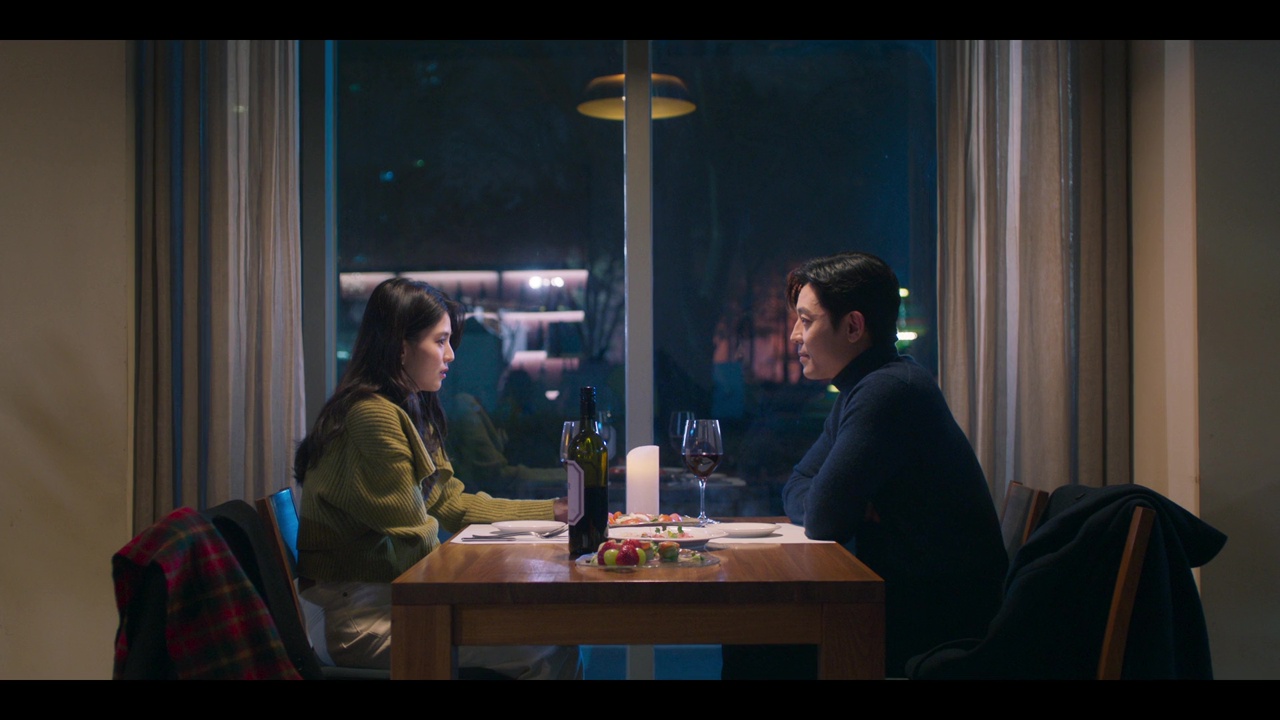 Turns out, his line about giving her tangerine juice without asking because he “enjoys sharing the things he likes with the people he likes” wasn’t just a pleasantry. He’s perfectly polite as he explains that he found her so beautiful when she begged for two more weeks to revise her lyrics, and he assures her there’s no need for her to respond right away… but still, this feels a tad creepy. Maybe it’s just the casting (Kim Joo-heon is 14 years older than Han So-hee), or maybe it’s the power imbalance in their professional relationship. Either way, it seems weird.

Then Sun-woo shows up, and it gets even worse. To be fair, he’s already miffed because he’d planned to finally confess that night, only for her to actively avoid him all day and stay out until nearly midnight. But that doesn’t give him a complete pass, because his response to seeing them in the wine bar is to barge in, sit himself down at their table, and start sampling their food, all while putting on the same odd, childish attitude he did before. 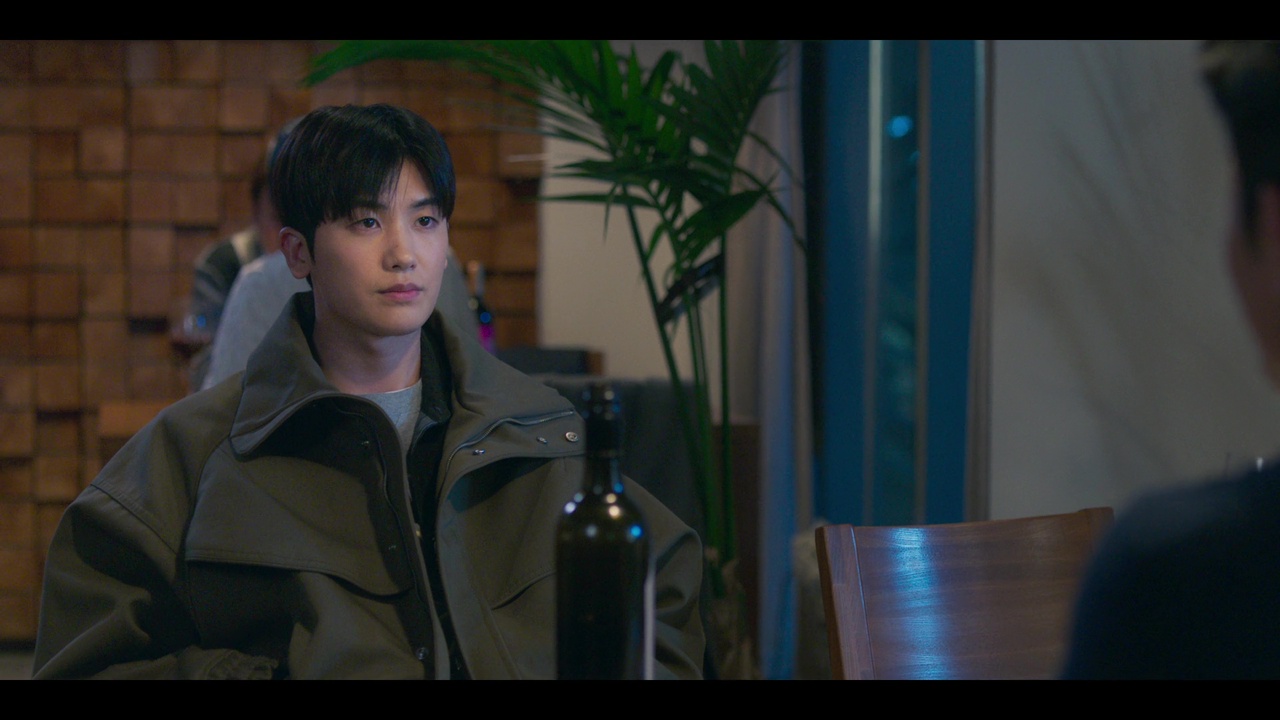 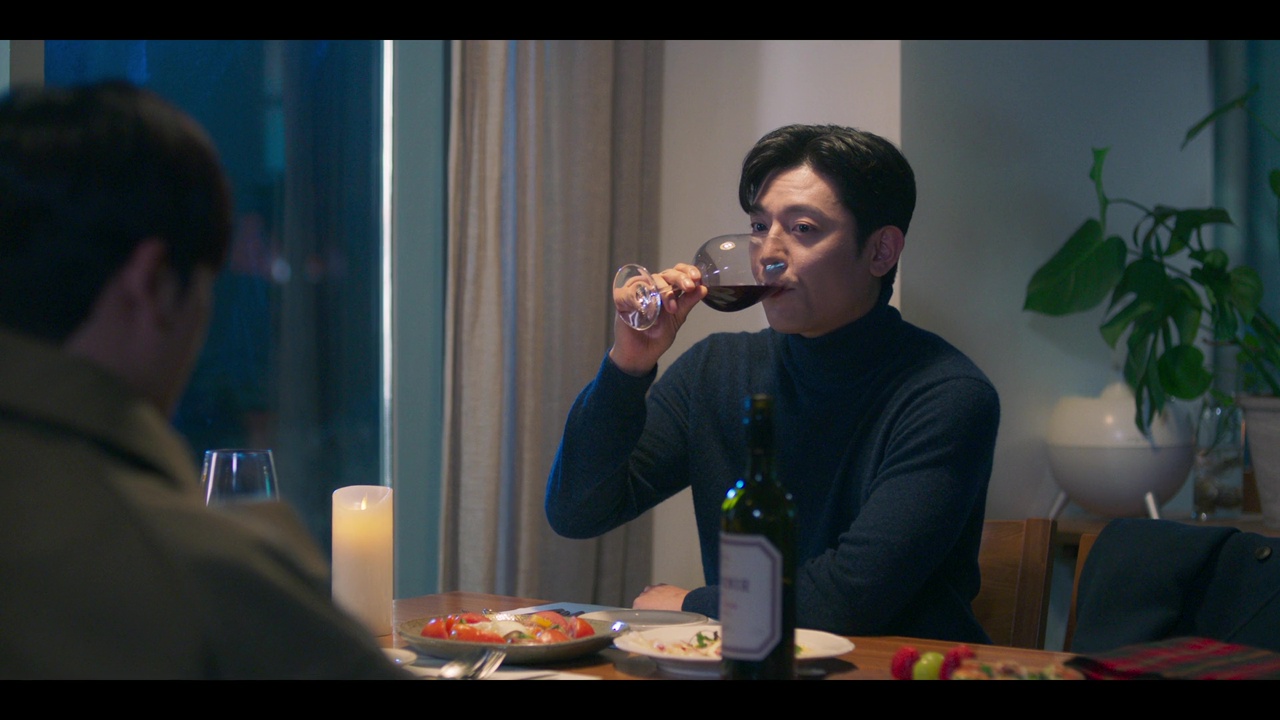 Naturally, when Eun-soo excuses herself to make a phone call, the guys get all territorial. The composer tells Sun-woo point-blank that he confessed to Eun-soo and is giving her space to respond as she wishes. And for some reason, Sun-woo seems to come to the conclusion that Eun-soo’s mind is already made up in the composer’s favor instead of his.

Instead of confessing, Sun-woo tells Eun-soo the exciting news he’d received earlier in the episode: a high-profile photographer contacted him wanting to collaborate, and they’re leaving immediately to travel the world with an exhibition. 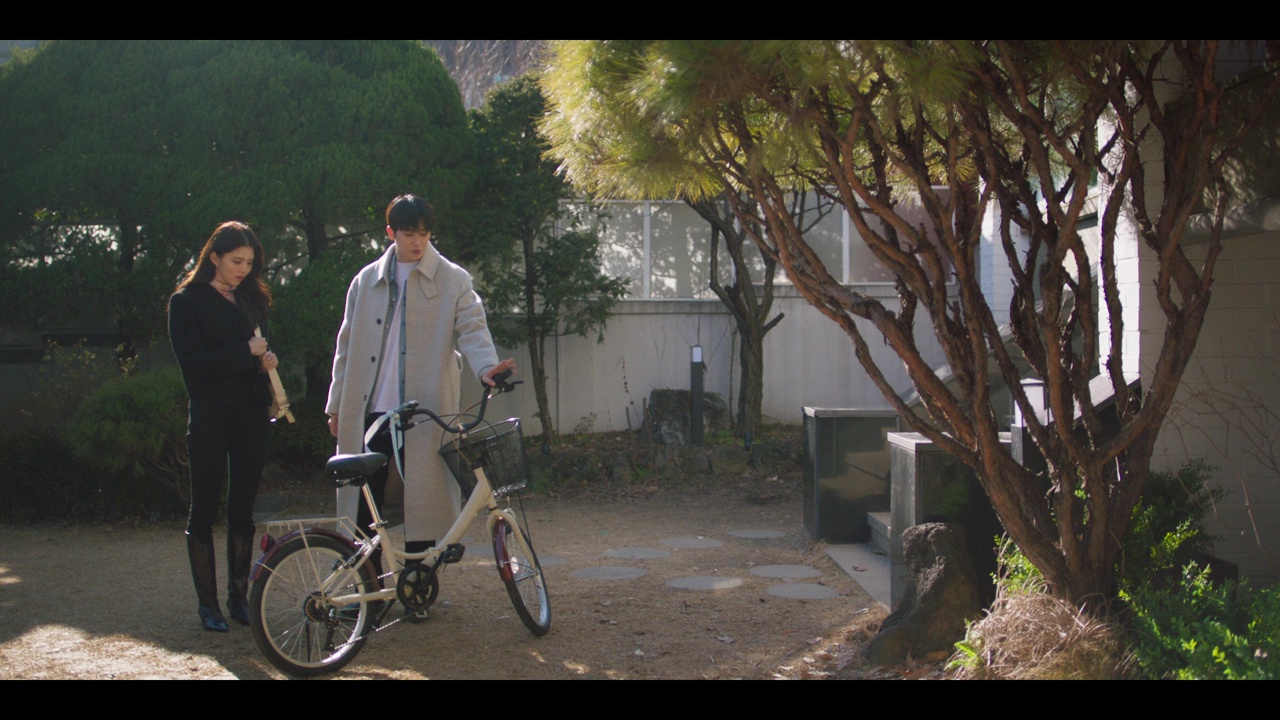 Now they’re both suffering in silence, when they could clear things up by simply talking to each other instead of making assumptions. The thing is, though, while Eun-soo claims she sees no point in not being direct about her feelings when she likes someone, she exhibits the exact opposite behavior when it comes to Sun-woo.

A flashback shows us that when he left for his military service, she put on a bright, smiling face to see him off, but then burst into tears as soon as he was gone. And she admits to their friends that what she’s really scared of isn’t so much losing him if they were to break up, but rather hurting him. 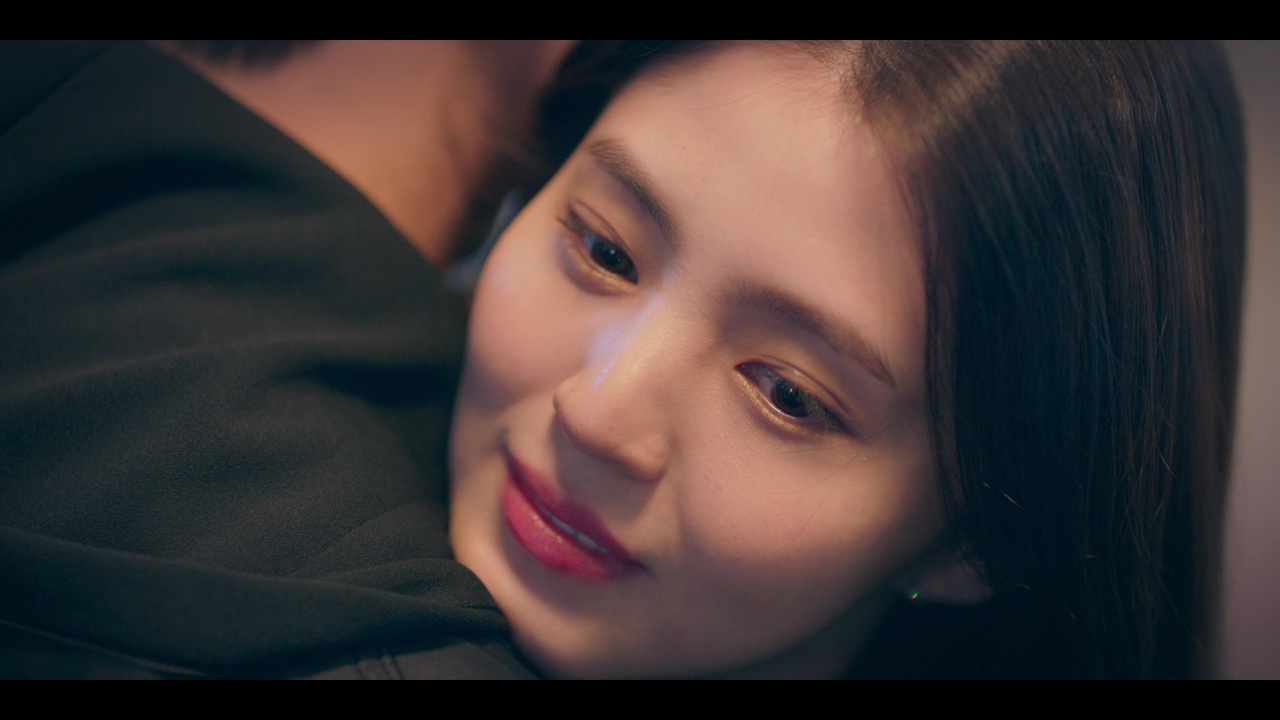 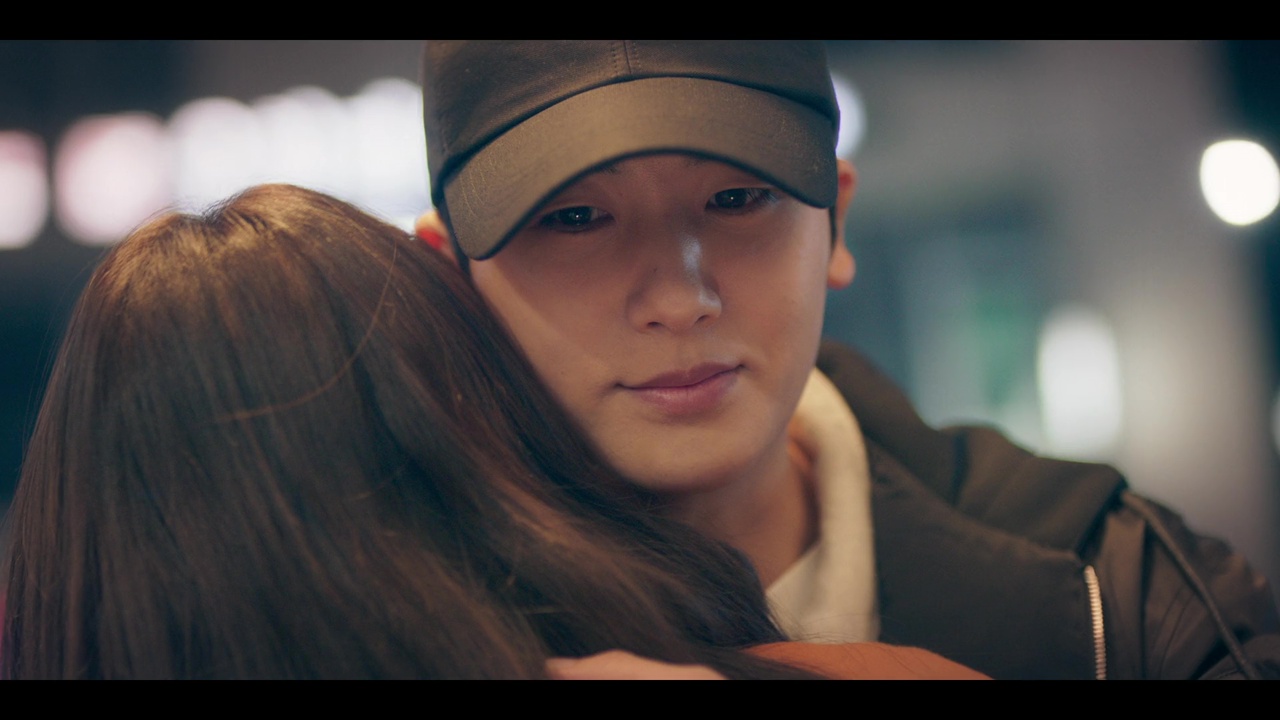 So now he’s left the country without telling her how he feels. And she knows anyway, and maybe even acknowledges to herself that she feels the same way, but is afraid to tell him. But she also finally understands what he meant when he described the feeling of loving someone and not being able to tell them, so I have a feeling her lyrics are ultimately going to do the confessing for her – just as his photos did for him.

Interestingly, if that happens, it won’t be the first time she’s written lyrics about their relationship. Back in high school, she wrote a few lines dedicated to their friendship, cheering him on to pursue his dream even though most of the other people in his life didn’t support it at the time. 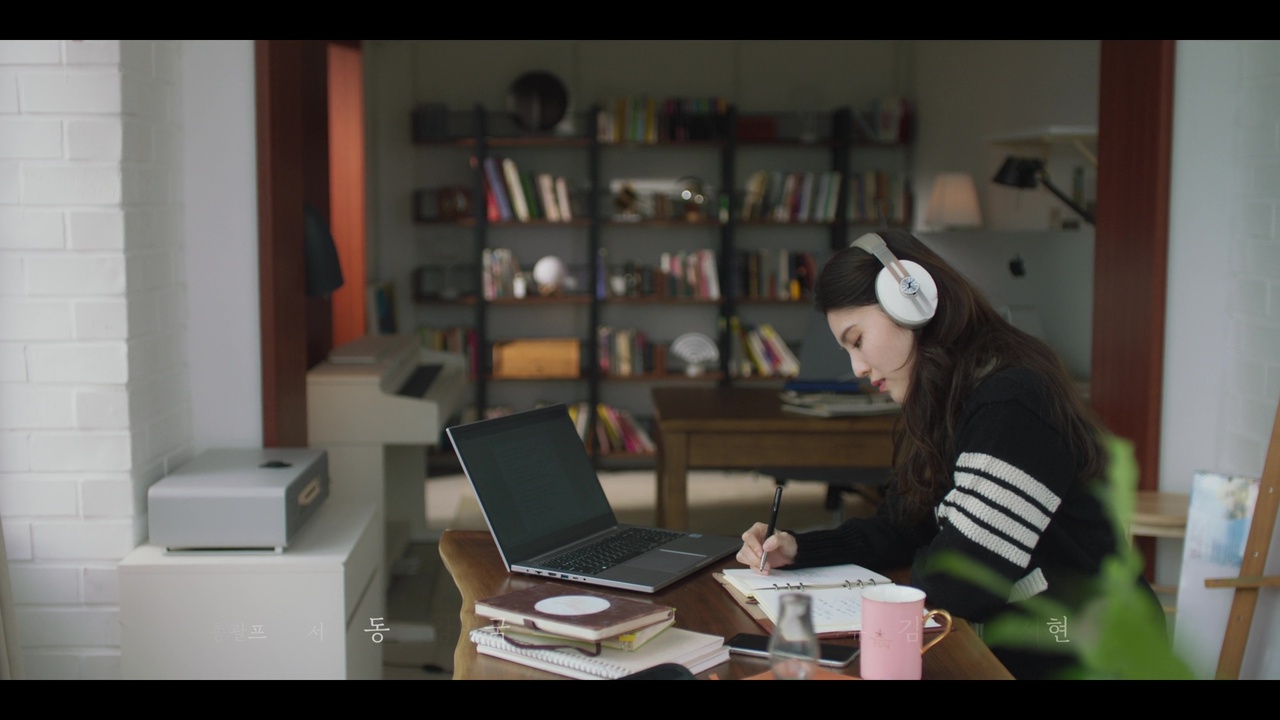 That unwavering mutual support is what has kept their friendship strong all these years, and it’s also what Sun-woo loved first about her. But now it’s becoming an obstacle in a way, because they both want the other to be happy – and will do whatever it takes to keep the other from being hurt – but they’re both operating out of the mistaken belief that somehow being open about their feelings might cause the other to get hurt. And neither realizes that that’s exactly what’s currently hurting them both.

I’m glad we only have one more episode left, because I’d hate to see this dragged out any longer than it has been already. While I have a pretty good guess as to how things will play out overall, I am just a little curious to see who’s going to show up first with some purple flowers and an actual, overt expression of love instead of dancing around the elephant in the room. 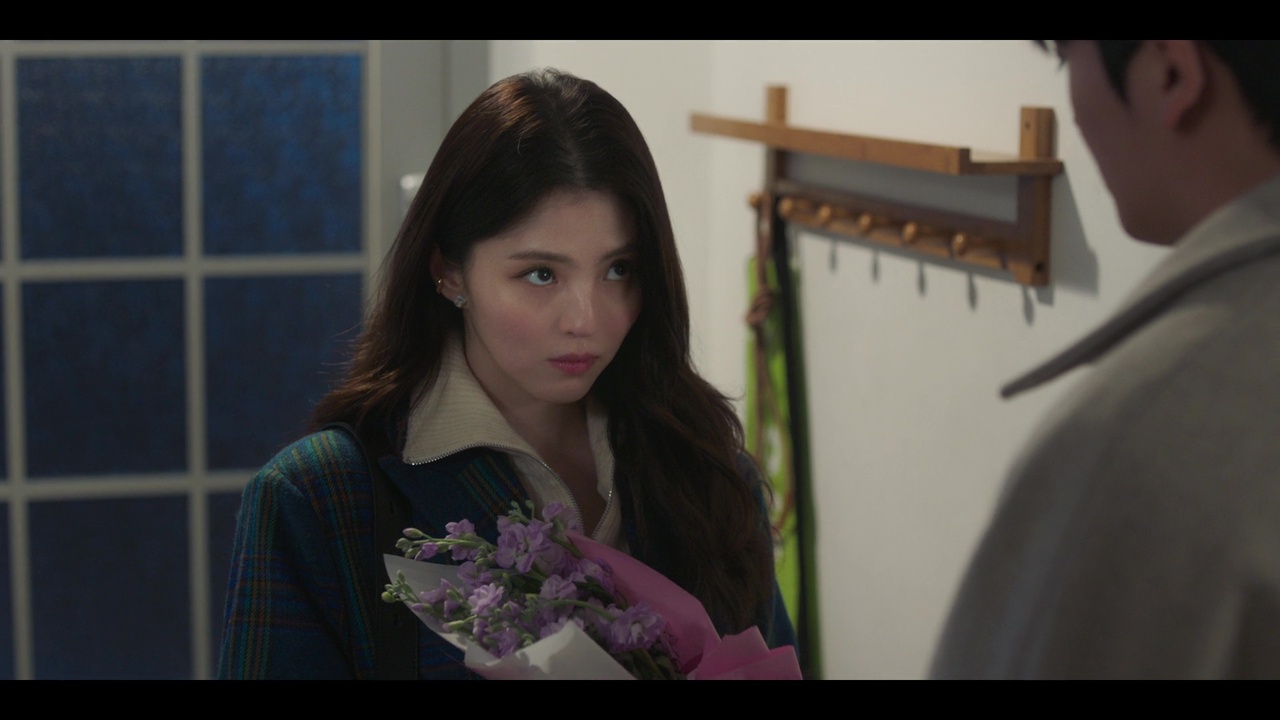 A painful watch with an awkward pairing and an off-key script.
(and I love Park Hyung shik)

This drama had all the elements to be good but kinda failed. I don't really like the characters. The soundtrack is not interesting. They barely stayed in the house how I was expecting. Their discussions are not so interesting.

I was expecting a drama more introspective and intimate with characters having real discussions supporter by a great soundtrack.

But they were good at conveying one feeling : the overdose of mandarins. I don't want to eat mandarins neither.

All I could think is this crush is unhealthy. I actually like their friendship. There is genuine love and caring. So we will have a year of separation. FOR WHY do kdramas do this, even in one of the shortest dramas I have ever seen. This did not need to be separated by 4 weeks.

Oh man, am I the only one who enjoyed this episode? While I really liked the first ep and was disappointed with the second, I think this was the best one so far. The music, the pretty cinematography, the tone all matched well. And I actually thought the angst wasn’t as manufactured as it is in typical kdramas. I felt Eunsoo and Sunwoo’s respective reasons for holding everything in to be believable based on what they’ve shown us thus far. The friendship has always been believable, but that military send off flashback, I felt like really sold the romantic feelings for me. The ending scene for ep 1 was amazing and this one rivaled it with the gut punch.

I think Sunwoo jumped to the conclusion Eunsoo was interested in the creepy (sorry, I love the actor, but it’s true) PD because she kind of was at first? She was gushing about his instagram like a fan girl, answered vaguely (“not sure”, or “maybe”) when Sunwoo asked him if she was interested in any guy. And then pretending she liked first mandarin juice and then wine. From our perspective, especially seeing the last encounter, we see she’s being polite but Sunwoo had different info.

I do have a bone to pick though. How did Sunwoo find them?! Did he go out in search of Eunsoo, and just happened to get out of his cab right outside the window of the wine bar and spot them? I hope he didn’t track her. I like Sunwoo a lot, but jealous 5-yo Sunwoo is my least favorite, and I don’t need him to invade her privacy as well…

I really liked it too. I'm too young in drama world (6 months old babyfan) to have a well-founded analysis of _why_ I liked it, though. Mainly the atmosphere, the cinematography. But as others said, the music for me is quite flat, I don't remember any song or melody.

You would think that a show called “Soundtrack #1” might have had more memorable songs or better sound mixing. I found the background music abrupt and the transpositions jarring. I’ll keep watching because I still enjoy the color palate and the softness otherwise.

This cements my initial assessment of Han seo hee, I do not like her in any sort of roles that tries to portray romance, of any kind. She is pretty bland when that happens. Park hyung sim is the epitome of chemistry, and even with his this one fell too short. The writing is bland, lazy story and zero chemistry. Sadly when I saw park hyung sik I thought this would be the drama where I finally warm up to Han seo hee in romantic stories but it was just the opposite. She needs to stick to bitchy or action roles.

I actually like her here, and find her chemistry with Park Hyung Sik pretty believable. It’s mostly friendship chemistry with a hint of blurred lines and the comfort and familiarity of 19 years. And then in this last ep you’re seeing her confused feelings and the angst at the end to tease her realization of romantic feelings. Prior to this, I may have agreed with you as I have only seen her in 100 Days My Prince and Nevertheless, and I felt she was such a standout in her smaller part in 100 Days and so bland and all over the place in Nevertheless, which I couldn’t finish. Anyway, I’m hoping this is a sign she’s growing as an actor as she’s landing the hot lead roles left and right and I hope she can handle them and does well.

There is no story... no chemistry... nothing...
Thank god, this isnt more than 4 episodes long! Imagine what if it was 16 episodes long... the horror