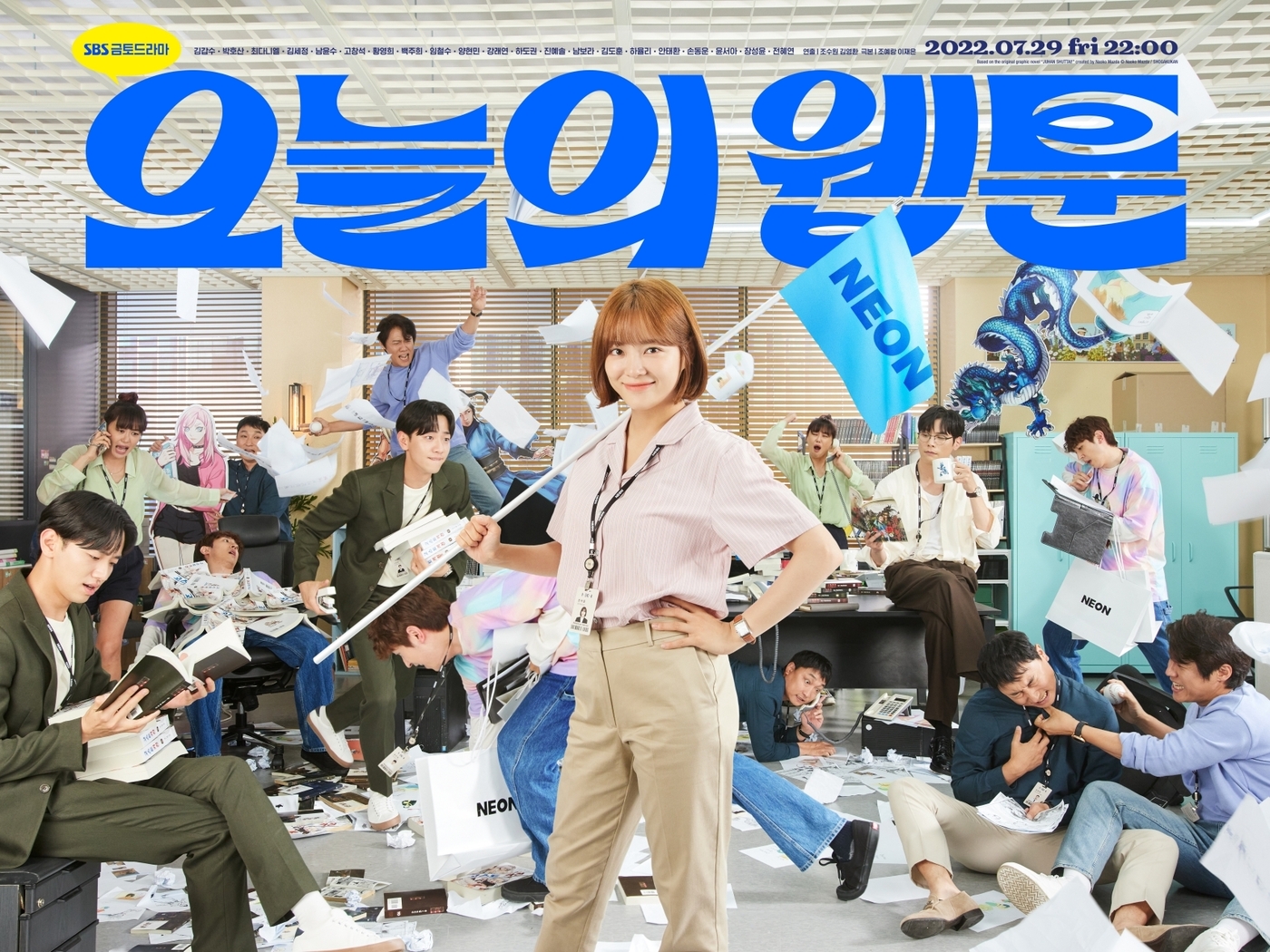 Heading into premiere week, SBS has released a new highlights teaser and poster for their upcoming office drama, Today’s Webtoon.

Set around a webtoon publishing company called Neon, the story has Kim Se-jung (Business Proposal) as the new recruit and rookie webtoon editor Ohn Ma-eun. As a former judo athlete, she’s got energy and spunk in spades, but is wildly different from her fellow new hire, Nam Yoon-soo’s (The King’s Affection) Gu Joon-young.

Despite their different backgrounds, both have a lot to learn about making webtoons as well as corporate culture, and managing editor Seok Ji-hyung – played by Daniel Choi (Ghost Detective) – takes on a mentoring role.

The new teaser begins with Ohn Ma-eum psyching herself up like when preparing for a judo match. But at the big job interview, she mistakenly judo-throws Editor-in-chief Park Ho-san (Monstrous) and she bemoans to herself, “I’m ruined!” She supposes that she’s just not cut out for anything other than judo. But Mom Hwang Young-hee (Jinxed at First) reassures her, “Whenever it seems like you’re 100% going to lose, our Ma-eum always has a curious stroke of good luck and wins.”

Sure enough, Ohn saves a webtoon creator while doing a security job and this lands her the much wanted job. Mom and Younger Sister happily celebrate with Ohn, who feels as if she’s entered a webtoon universe with characters coming to life all around the office. The drama’s title card ends the fantasy sequence and we cut to Managing Editor Seok arguing for someone with more experience. But the Editor-in-chief defends our heroine’s potential.

On the first day, Ohn vows to do her best and squeals in delight at being called “Ohn PD.” But unlike our superfan, fellow rookie Gu is completely out of his element as a webtoon newbie. Even at the team’s welcome dinner, the two show their differences in alcohol tolerance as well and Seok muses that they’re like opposite genres. Gu’s competitiveness is triggered though when the staff praise Ohn and not him, and we get a fun fight sequence in the style of a video game.

The rookies are each assigned to a webtoon creator, but the first meeting is disappointing for both. Seok warns Ohn that Im Chul-soo (Alchemy of Souls) has a habit of going MIA for long periods and introduces her to the company’s best creator, Kim Gab-soo (I Haven’t Done My Best Yet). Seeking advice from her colleagues, our heroine learns that meeting deadlines is the most important and challenging part of the job.

Ohn tries valiantly to develop a better rapport with Im. But when the reliable Kim is about to miss a deadline, the team goes into panic mode. In the sequence that follows, we see how each creator requires attention in different ways and the intermittent text screens read: “Friday, July 29 at 10 pm. The fierce and dynamic office life of webtoon editors begins.” We also get a brief glimpse of Ha Do-kwon (Red Sun), who seems to be brewing trouble for the team.

Seok sees our heroine sleeping at her desk and starts to acknowledge that the Editor-in-chief was right about her. Ohn is determined to work even harder and narrates, “I believe that time spent sweating [from effort] cannot betray you.” She rallies the team to get excited about their goal, and she finds support in both Mom and Dad Go Chang-seok (Memorist) as well. The teaser then ends on Ohn’s conclusion, “I am doing my best and I will continue to do so in future.”

On the production side, PD Jo Soo-won (Doctor John, Thirty But Seventeen) co-directed with PD Kim Young-hwan, while writing was done collaboratively by Jo Yeh-rang and Lee Jae-eun. SBS’s Today’s Webtoon premieres this week on July 29, following Why Her in the Friday-Saturday slot.

Via My Daily, News1

@kafiyah-bello: But he has said some dumb and dubious things recently. It is amazing that with all of the self-censoring that actors and singers do, some hideous stuff still creeps out.

Oops! I made a rookie mistake. It was Kang Daniel. And not Choi Daniel! Yikes! All is well with Choi Daniel! In case, you are interested, this is what I saw which sadly I got wrong! Sorry Choi Daniel!
https://www.soompi.com/article/1536865wpp/kang-daniel-issues-apology-for-his-comments-related-to-street-woman-fighter

Lol, I came to this late, so ot was horror sadness and them reflief.

It was, and then, I type to fast sometimes.

I'm glad that Choi Daniel isn't a bad guy (that we know of).

Counting down to Friday when we finally get to watch the first episode.

I am looking forward to this.

I'm soooo excited for this *does happy dance*