Okay, so when my Maknae sister was 10 she gave me a band-aid and “For your pain!” she said, she had written that in English on the band-aid herself and had drawn a little heart next to it. I thought it was the cutest thing ever so I kept it in my bag and never used it.

Last year, on one of my first dates with SNG (fourth actually!) I accidently hurt his hand and got him a cut in between his thumb and index finger (I went for a handshake, I don’t know why I did that, he was surprised because he wasn’t expecting me to do that and I was surprised because I wasn’t expecting me to do that either. It got very awkward and my head went: “Make it quick, shake his hand and pull your hand fast!”, so I went to do exactly that and my index finger dug into his hand, it bled so much that I was mortified and I wished me dead). I always carry a little emergency kit with me in my bag but that day I had changed into a smaller bag in which my emergency kit didn’t fit. I kept apologizing to him and he kept saying that it was okay and that it didn’t even hurt (Liar! It left a scar, he has it till today!).

For the rest of that day I felt so guilty about it and I couldn’t stop staring at his hand. I did have my sister’s band-aid with me but it was too precious to give to some guy I barely knew (hehe!). At the end of the day, he walked me to my car and caught me staring at his hand so he told me again that it was okay and that I should forget about it. I hesitated A LOT but my guilt won and I gave him that band-aid and told him to put it himself because, yeah, I wasn’t going to touch him after what I did, he laughed but said thank you.

Today SNG asked me to get him something from his wallet and I have a rule of not touching people’s wallets (Yes, even his! He thinks it’s hilarious that I look away when he pays for things.. but I feel like I shouldn’t look 😅), so I asked him if he’s giving me full permission to do that and he laughed at “full permission” but “Yes! Just go!”, so I did and guess what I found? YES! THAT BAND-AID!!!

I literally ran to him with it and went: “YOU KEPT THIS!” and he laughed. He laughed so much and then got so embarrassed like I just saw something I shouldn’t have (see, that’s why I don’t touch wallets!).

He’s forever holding a grudge against me for those flowers!

Also, WHY SO ADORABLE? 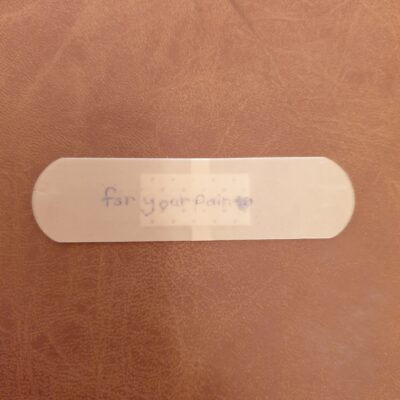 I still hope you are saving all these to eventually publish the whole set somewhere.

I am and I have a lot more saved that I never shared! If I do ever publish this you’ll be the first one to know!

reading this latest installment of the little vignettes of your life that you share, reminds me a bit of the Chinese novel I Don’t Like This World, I Only Like You, which was dramatized in Le Coup de Foudre. I mean, you and SNG have a completely different story, but the way you write about things is just so much fun.

Now I need to read this and keep it for future reference!

Also, .. umm.. I do actually have a book published but I can’t tell you more, you’ll find it and then you’ll find me and there goes the little anonymity I have on DB, I can’t afford to lose that just yet. But, I promise, if and when I do write that book about SNG and I, you’d be the second one to know!

❤️ I take it this means he’s well now. So many adorable stories that I’m looking forward to the novel and subsequent drama.

I don’t know about anyone else but @egads will be the first one to watch that drama!

Thank you for such an adorable story first thing in the morning.
Also, hey azzo! 👐

Thank you for reading!
Nice to see you back on DB, gadis, *waves back*

I cut his hand, how does that make me adorable?! He on the other hand, totally is 🤭

By having that bandage, keeping it safe, just for him!

Awwww so adorable you two! Glad that SNG is well!

Thank youuu!
Still waiting for that rain though!

Oh no. Guess it’s only in my area this time xD

oh no, honestly you two are so adorable it makes me tear up 😢

Also, are you Wolverine Azzo? 😆

I don’t know how that happened!

This is so kilig!!! I love people who keep small stuff like these!

Funny thing is, my sister doesn’t remember giving me this now, she can’t believe that she could do cute things like this, LOL!

Oh my heart, azzo! You do this to me every single time!!💗

I’ll take that as a compliment 😂❤