Watched Fly Dragon (aka Delayed Justice)’s premiere this weekend. The first episode was a bare, brief introduction and setup of the main leads’ individual stories. The second episode was a little better with the humor and the two of them slowly teaming up.

The overall impression wasn’t WOW AMAZING. However, I like their chemistry. They have a silliness, but they’re not dumb. Realistic, ordinary characters. The odds are stacked against them, but it feels like it could be a good underdog story.

And it’s nice to watch a story without anything supernatural…. 😂 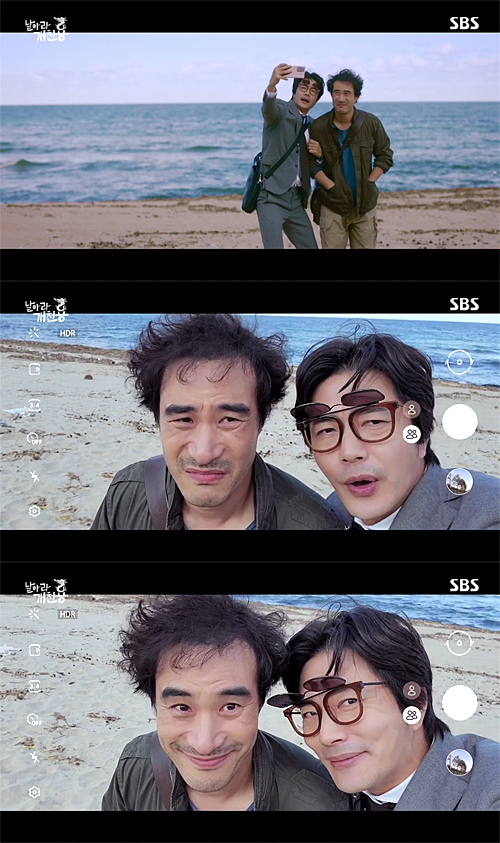 That’s how I felt about it too. It was okay but got better when the two leads started interacting in Episode 2. I like both actors, and they have good chem. It’s based on a true story, apparently.

Ooohh didn’t realize it was based on a true story! I checked out this drama for Kwon Sang Woo. Haven’t seen Bae Sung Woo before, but I’m intrigued. :] 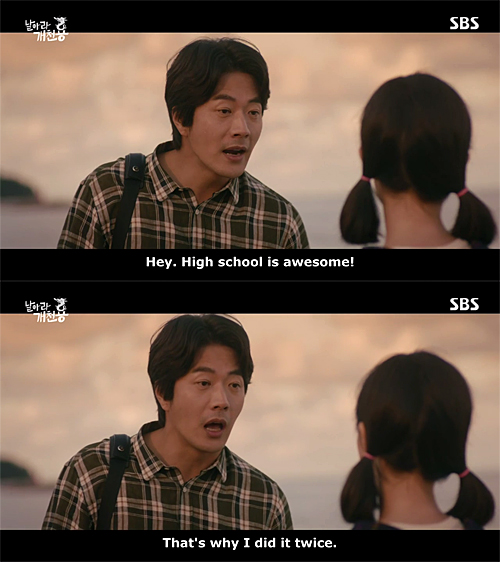 Zombie Detective‘s finale was today. I had forgotten it was only 12 (1 hour) episodes~! This show was mostly fun and hilarious and it ended well. Tons of meta and jokes. #positivevibes

The good guys were pretty likable except the second male lead. He wasn’t awful, just neutral. Also warmed up to Seon Ji (the female lead) after the first or second episode. She was a bright ray of sunshine in Moo Young’s life and was a big part in helping him during his journey to solve his personal mysteries.

The zombie/noir concept was a strange combo that worked. Even with the shorter drama length, there were still some scenes that dragged and with the wacky zombie plot, logic wasn’t always a factor. But in the end, it was funny and surprisingly heartwarming. 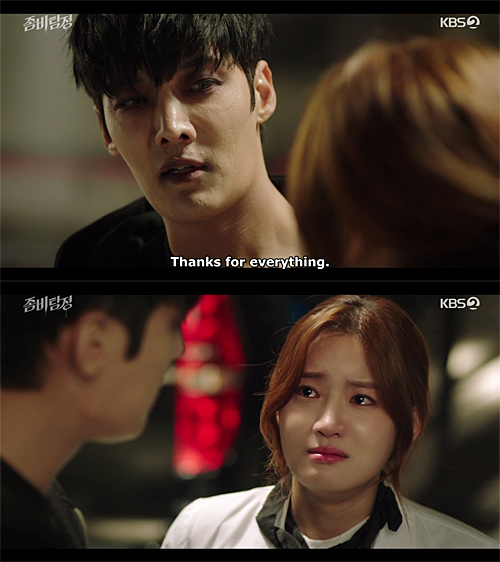 Whattt I didn’t expect this

Totally agree with you.
I didn’t expect to like it and actually began watching after reading so many good thing on the wall and on What we are watching. It was very good decision to decide and watch because I had so much fun watching! I will never again judge a drama by it’s promotional poster 😉
I liked everything about this, the perfect balance between comedy, horror and drama. Acting and directing was so solid, all actors knew what they were doing, they never overdid anything (which could have been so easy and then we would have a disaster).
The only thing I didn’t like was the “love story”. Imo the show would work as well with zombie MoonYoung and Sunji as friends.

Yayyyyy glad you didn’t miss out~! I also started this drama a little late after reading the fanwall raves. It really had a good balance.

Hmm, but they didn’t go overboard with the romance factor. They’re still friends. Obviously it couldn’t work out since he’s a zombie. Maybe they tried to show that he could still be treated like a human and someone could still feel affectionate towards him. ^^

I’ve seen Choi Jin Hyuk in 5 dramas. I really liked him here~! One of his better, more interesting roles. Glad he went all in. 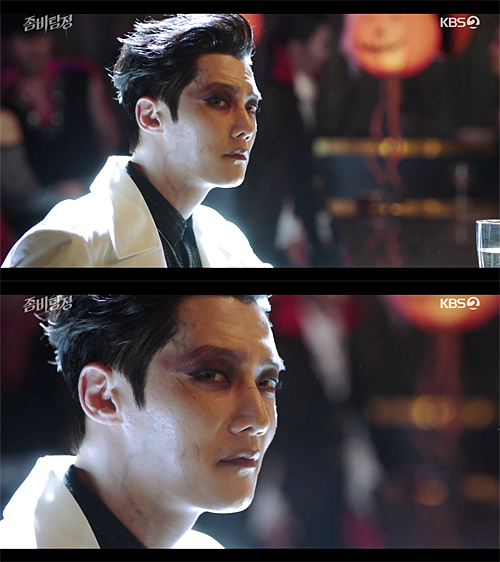 Me too.
I’ve seen him in four dramas, and always find something about him that I like (aside his perfect looks, of course!). He managed to make his zombie more “human” and his struggle both real and close and funny and sad.
I expected this drama to be a complete disaster and it was one of the funniest and more entertaining ones I’ve watched lately.

Search is probably better as a binge-watch because the episodes end on dramatic, thrilling cliffhangers and I want to know what happens next so bad! 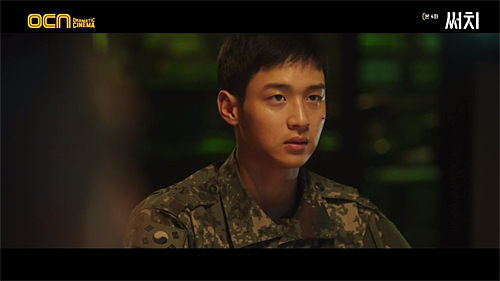 Exactly the show is so good at cliffhangers 😔

I shall listen to your advise on this one then.

I’m having so much fun, specially considering I was not expecting to have so much fun. I’m so glad I’m watching!

Good to know! I’ll pile the episodes up before I watch then. Thank you!! 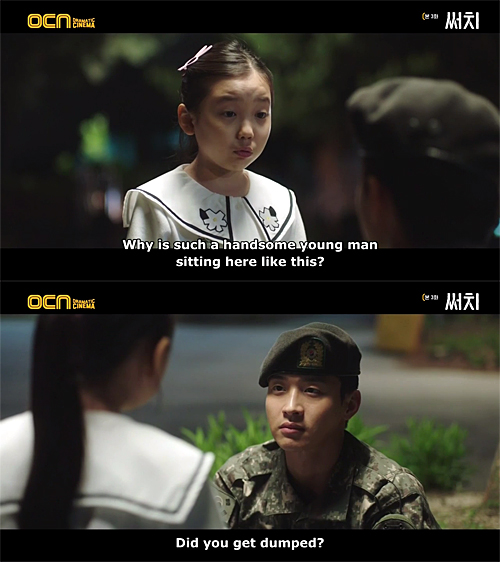 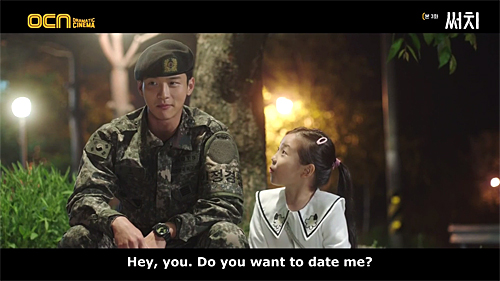 (They were in The Tale of Nokdu together where she also had a major crush on him).

Is this show good? I’ve been debating picking it up all week.

Hmm, I’m not sure yet. Not a crack drama, but it’s an easy watch and I like mysteries a lot.
I’m not deeply analyzing some of the action scenes. Hope it won’t get too stupid or ridiculous though lol. This is only EP 3, but things should be more intense later.

She is my idol.

I had the same thought. (Last screencap is a clear photo of him~) I first saw him in another OCN drama Strangers from Hell where he was hella scary. I’m sure he could pull off an evil/creepy role here if the time comes~ >.< 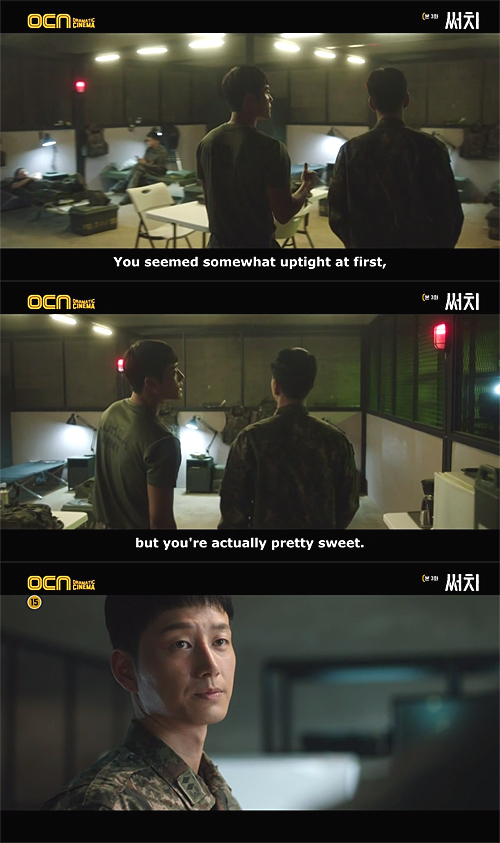 (Start of my DYLB finale spam~)

In another drama, this might’ve been weird, but this emotional scene hit me hard. ㅠㅠ

Song Ah & Joon Young overcame their individiual problems and each became a better person. I liked the finale! Got me teary-eyed a few times.

Their friends’ side stories were wrapped up. Nothing crazy. Jung Kyung found her path as a kind teacher, but I’m still glad she and Hyun Ho did not get back together. They are moving on. 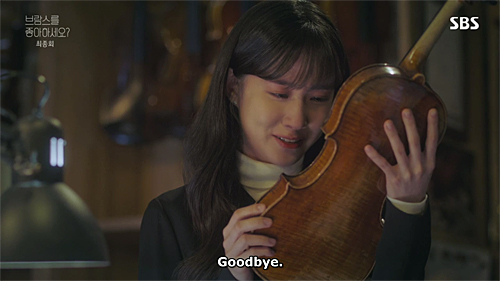 Only gripe, the whole dramatically giving up her instrument wasn’t needed……you can still play even if you aren’t a career violinst…..but I guess that was closure for Song Ah and she is sensitive so I will just let it pass

Agree with you. Completely giving up violin was uncalled for, and unnecessary for her character arc.

This scene was so touching. ㅠㅠ His last piece Widmung sounded beautiful. I love that this performance connected her back to the first time he performed for her and showed his feelings without a word. ♥ 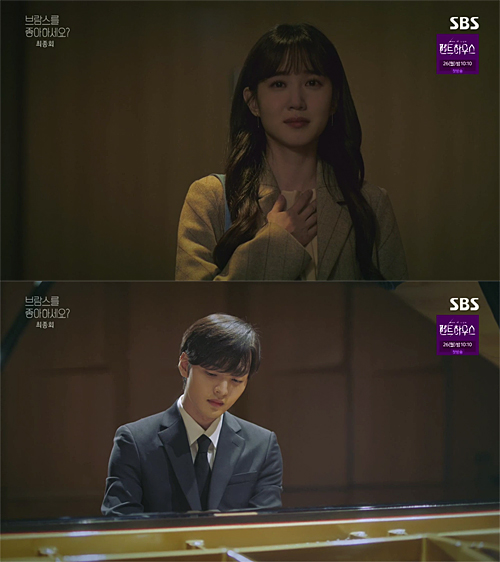 I’m glad she was able to feel how much he loved her through that because honestly when she came in and said “as a friend” and that she couldn’t do that any longer, my heart stopped. Thank goodness, that turned around.

Aww, how sweet!!! And he looks so happy & bright compared to the old album cover. 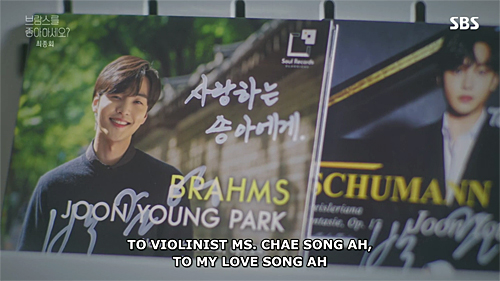 I loved this scene. Not only did they talk all night (right?), but this display of the album cases was cool. The “my love” phrase made me happy, as did the the difference in the cover overall (he’s smiling, he’s outdoors, and it’s so bright; contrast with the one beside it, where he’s scowling, indoors, and it’s dark).

Awww that’s so trueeee and they took the photo there in the wall. cutieeee

Definitely a big sign of how much has changed in his life and Joon Young sure deserved to be happy.

Mirroring it is!! Love the finale!

So I just watched the premiere of Search. I didn’t know it was almost a horror show tho. Dx
I didn’t read the synopsis. I rarely do. Only knew it was OCN thriller type and Jang Dong Yoon was in it. Though it’d be mainly military stuff. Ugh. I don’t think I can watch this at night. And I don’t know if I want to continue. #scaredycat

It wasn’t boring. It was very suspenseful and creepy. I was so dang worried about the dog running loose.

It was, isn’t it? I was jumpy the whole time and I watched it just now, in broad daylight!! Hahaha. I am curious though, will watch this! Dong Yoon is so manly for a change! 🤩Haha!

Hehe, he was my main reason for checking out this drama. He looks good. They showed his abs right away. 😂

I could try to watch it in the daytime and see if I can handle it…. Lol

Hahaha! Yes me too! He actually looked like his age for this role! I was gushing the whole time his abs was on, my brothers at the back kept rolling their eyes. Hahaha

Zombie Detective EP 8: The twist about Moo Young’s family was so heartbreaking! Totally didn’t expect for this show to make me bawl.
I sorta had an inkling it was possible, but I brushed it off. The way it was revealed was so sudden and painful!! TT__TT

With all her misery building up, this hug & cry was very much needed.

The breakup scene was sad, but it wasn’t too painful or frustrating. Song Ah taking a step back and putting herself first was good. Haven’t seen the poor girl smile in forever. :[ 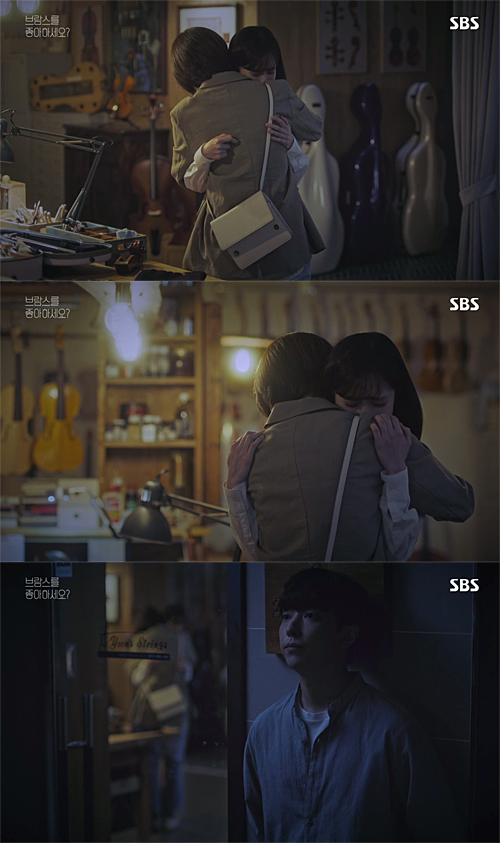 Oofff this was unexpectedly my favorite scene this episode. Nothing was said. Just Song Ah breaking down and crying on her friend’s shoulder. I admit it made me shed a few tears.

My fave scene of this episode. I appreciated Dong-yoon doing this. He knows he can’t do anything for Song-ah rn but to call Min-seong. Plus props to Min-seong for coming right away. She’s a true friend.

One of the best scenes this episode for sure.

I love Dong-yoon so much. His cute handsome style.

Could he BE any cuter? 🥺

Why am I squeeing over the use of an umbrella??? 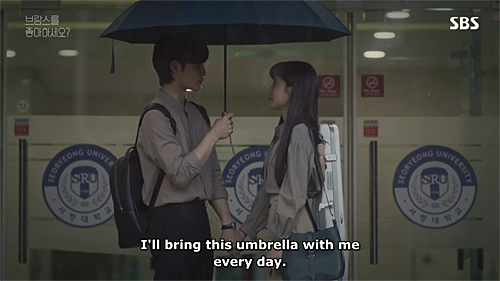 Manager Park is such an ass. Before the ending, I was going to say he’s taken the top spot of most annoying and horrible person in this drama instead of Jung Kyung. But Professor Lee took it in one fell swoop after her last comments to Song Ah. She doesn’t have any redeeming qualities. Song Ah has endured so much crap from her professor. I would think that excluding her from the chamber orchestra will be the last straw?!

At least, Jung Kyung was a lot more tolerable this week and I haven’t FFed her scenes. She is a good teacher and kind to her students. She looks nice when she smiles.

Umm. & today’s final scene. I hope Song Ah isn’t going to misunderstand anything because Joon Young did tell her that he had practice with Jung Kyung on the same day as her group dinner…

They gave us all the sweet parts first and left us on a sour note. Ugh. D:< 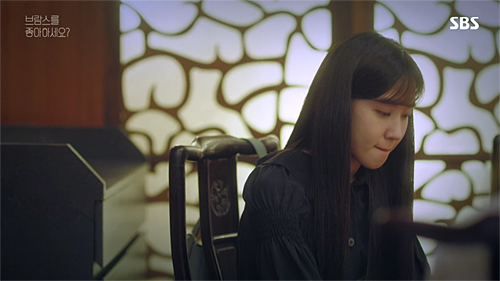 I think the last part with Song Ah seeing JY with JK just have to drive the point all of the annoying characters has been feeding her with, most of their time btw. Gah!

Just finished the premiere of Zombie Detective and I liked the zombie parts a lot. He definitely made me laugh out loud more than once.

Didn’t like the female lead and her brash personality though. Her reporter role reminded me a bit of Lee Sun Bin’s role in OCN’s Team Bulldog. Hopefully she will become just as likable soon.

Excited to catch up on this new drama. :] 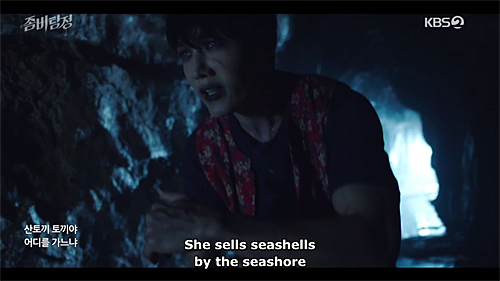 Will try to catch up with this tonight!

Super addicted to this song rn. I’m in love with Golden’s vocals!! ❤️❤️❤️
I’m glad he’s with H1GHR MUSIC. Didn’t check him out when he was with JYP.

I’m not into khiphop or even hip hop in general but I may just check out this album for PH-1. He’s such a well spoken, soft kinda guy lol. If you’ve seen Dive Studios Podcast, Get real you’ll know what I am saying. He became an instant crush when he displayed his personality a little.