Since College is on break because of the Covid-19 outbreaks, I’m finally free to watch dramas again! (Well for now!) Pls give me some good drama recs! ♥♥ Stay safe beanies 🙂

Prison Playbook if you haven’t already watched it.
From the last few months, try “Black Dog”– it’s a slice of teacher’s life.
Also from the currently airing I’m enjoying “I’ll go to you when the weather is nice”, “Hospital plahlist” & “Hi Bye Mama”

First of all I’d like to say this drama is really jabbing me right in the feels. That talk Yul had with Bang Jin’s mom was straightforward and honestly something Yul had to hear. It’s heartbreaking but it’s absolutely true. He’s a ghost who in the end doesn’t belong together with humans. I still want him to reveal himself to Seol, although I’m afraid that after his conversation with BJ’s mom he’ll decide not to. ☹ I’m also glad that Yul has never attempted to lead BJ on and has been consistently telling her he’s already interested in someone else, even if said person already likes Se Ju. Also, I feel like they’ve been severely neglecting the storyline which involves Yul trying to find out how he died. I cannot imagine him betraying past Se Ju, so it’s really stumping me on figuring out the mystery of his death and how it’s connected to what happened in the past. My final words on Yul’s character, is that I hate how that they made such a loveable second lead who has absolutely no chance to get w/ the girl he loves. I think this is the worst case of second lead syndrome I’ve seen. Since from the start we all knew that he’d have no chance, but it still didn’t stop us from loving him. T-T Perhaps it won’t be with the girl he loves, but I hope he finds his own sort of happiness by the end of the series.

I loved the talk Se-Ju had with Seol throughout the episode. Seol is feeling immense guilt towards Se-Ju because she believes she killed him in the past, but Se Ju is having none of that. He tells her that while they do have a connection because of their past lives, the past doesn’t essentially dictate how they live in the present. Basically saying history isn’t going to repeat itself and reassuring her that even if she did hurt him in the past, she sure as hell is doing the opposite now. Since she has saved him on several occasions too. This talk was definitely needed since Seol was beating herself up and I’m glad Se-Ju was there to deliver it even if it was in a hospital of all places lol. Also, I’d like to note that Se-Ju has been getting smoother in each upcoming episode. Like him leading with these words, “I think I loved you in my past life. Nevertheless, I think I closed off my heart so I could date you to my heart’s content when our country was liberated. This isn’t paying for your crimes; this is an acquittal. An opportunity. So today, I’m going to do something for the sake of my homeland”, was just the right amount of being sweet and serious. He means to comfort her but also to show that he is serious about their relationship and that he’ll never turn away from her because of mistakes she might’ve made in her past life. Wow it was a cheeky line, but it was an effective one!!

Hope to see Se-Ju’s awesomely hot wig and the rest of the characters in the upcoming episodes!!!

Yul’s character will go back to its original purpose soon. I swear writers made him that sweet to break our heart.

It was nice to see Se Ju being less of a drama queen and reassuring Jeon Seol as they don’t know the full story yet.

I’m thinking that too. Yul is such a sweet and vibrant character! And as you can probably already tell, my favorite character too!! 😁 I absolutely cannot wait to see the mystery of Yul’s death unraveled. I’m sure it’ll be shocking too!

Lol that’s definitely the most accurate description of Se-Ju’s character! Plus he can change from being hot and cold so fast! & Looking forward to the wig!! 🤣

Taking some time to share and show some love for Henry cause phew this song is amazing! 💕

HDL is breaking my heart. First we got the tragic love story of Sanchez 😭 (gosh he needs some good in his life & thankfully Chan-sung is here for him through these tough times), & then the revelation that CM was actually w/ MW the whole time!?! It\’s pretty heartbreaking to know that he has endured being a firefly for so long just to stay with MW…who still holds immense spite for him and doesnt know the real reason he betrayed her (Hoping to find the reason why soon). Also, I really hope both MW and CM will find closure. I feel like he might be the final hurdle that MW has to face in order to move on to the afterlife. Lastly, I\’m honestly not too invested in the romance aspect of this show, but it\’ll still be super sad when/if CS has to see MW off.

Update on Chicago Typewriter:
Yul just become so relatable when he was shown watching Produce 101 & ugly crying over kdramas 😂 And aww the trio finally took a photo together 💕 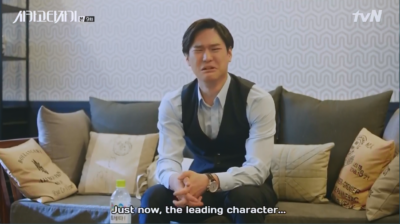 Oof Search WWW is something I’ve yet to watch, but I’ve heard a lot of good things about it!! So I’m bound to watch it sometime in the future. Cant wait to see how Produce 101 cameos in Search WWW though!!

If you don’t plan to watch WWW, you can just watch the Produce x 101 cameo on ep 2! HAHAHA

But I swear, that show (WWW) is really great HAHA

Haha I’ll take your word on that then and add Search WWW on my list! But I can’t guarantee that it’ll be the next drama I watch, cause currently there’s a long wait list already lol. I legit just came back from a long hiatus from dramaland and there are just sooo many new (well at least to me lol) dramas to watch! & Yeah I’ll probably watch the cameo scene soon then 😂👌

I’m looking forward to see your reaction! I also came from a 6-month-long drama hiatus 2 months ago so I understand how you feel.

Oh gosh, Chicago Typewriter was SUCH a gem. That picture they took together made me feel so many feelings.

I’m trying not to reveal spoilers through my posts but that photo was so bittersweet. & Yeah! I’ve certainly never watched a drama like CT before!!

I know this is probably a basic question, but how do some people make such long posts when the limit is 200 characters?

Write somewhere else and paste here! (If you are using a laptop, use paste as plain text.)

Yes on laptop Ctrl+ V will not work, you have to use paste as plain text. You are welcome.

On PC, paste with MOUSE. Don’t even think about touching the keyboard.

On my phone I just write it in a text message and then cut and paste.

Thanks for answering my question! ^^ I’ll definitely keep that text message method in mind next time I type on my phone

Finished 2 episodes of Chicago Typewriter today and I have to say Go Kyung-Pyo is nailing his role! There’s so much mystery behind exactly who he, Jin-oh, is and tbh he’s the most compelling character

I loved CT! Hope you enjoy the full ride!

Oof this drama is going to be the end of me! I absolutely adore the casting but in the beginning I will admit I was a bit frustrated with how Seol kept invading Se-Ju’s privacy (maybe that was just me ?). Although now she’s definitely grown on me. 👍 & dont get me started on Taemin…he makes my blood boil. I mean who throws their cat?!?! He certainly has a handsome face but damn his personality is horrid. Kudos to the actor for making my creeper radar with his acting! & thanks! I’ve hit the halfway mark for the drama and I’m fully enjoying the mystery and suspenseful aura the drama has 🙂 Sorry for the long message 😅 I tend to write too much

hehe dont worry about it! I love reading long comments heheh. Glad you are loving it so far 😀

It’s the only time I thought GKP was a very charming man! I loved Seo Hwi Young (hottest wig ever) and Jeon Seol’s relationship.

Oh yesss that wig can do wonders. I liked Se-Joo already in the the present but in the past when he had that wig on…wow! I didn’t even realize it was a fake at first too. Cause that’s one quality wig

I was confused with that wig. High quality for this wonderful drama. There’s a kiss scene which made Beanies go crazy too haha.

A kiss scene you say? Ohh then I can’t wait to see that scene and it might be another chance to see that hot wig haha

Yeah! That kiss and the wig are the greatest combo!

Go Kyung-pyo is fantastic while Yoo Ah-in’s wig is majestic.

This is actually only my second time seeing Go Kyung-pyo in a drama, but still I’m really enjoying his acting in CT! & that wig is amazing 💕 It makes the already good looking Se-joo even more handsome haha. Didnt even realize it wasnt his real hair too at first.

Just watched a couple episodes of Chicago Typewriter and I gotta say I’m wowed. I really love the cinematography as well as the fact that they have an OST in english!! Plus the plot is pretty unique

The wartime storyline is amazingly good. This one will always be in my top 10.

I haven’t really seen a drama that had a wartime story since Bridal Mask, so I’m pretty hyped for this!! Right now I’m at episode 5 & I cannot wait to see more of the storyline in the past.

Ohh Different Dreams looks pretty interesting!!! I’ll have to start that soon but not before I finish the countless dramas I’ve already started 😭😂 & Alright I won’t try Basketball lol. Also, I’m starting to gravitate more to period dramas now since I plan to watch The Crowned Clown & The Rebel soon (which btw do you know if they are good?). Anyways thanks for the rec! 🙂

Rebel is my favourite among the two. The protagonist’s father could have had his own drama. The Crowned Clown had a good start, was engaging til the first half and the story became less interesting. The cast and the production were top notch tho. The movie was better (Masquerade with Lee Byung Hun and Han Hyo Joo).

Cannot wait for Psychopath Diary with Yoon Si-Yoon!! Just finished the Best Hit and it definitely made me a fan of his! Also brings back memories of him being Enrique on Flower Boy Next Door lol