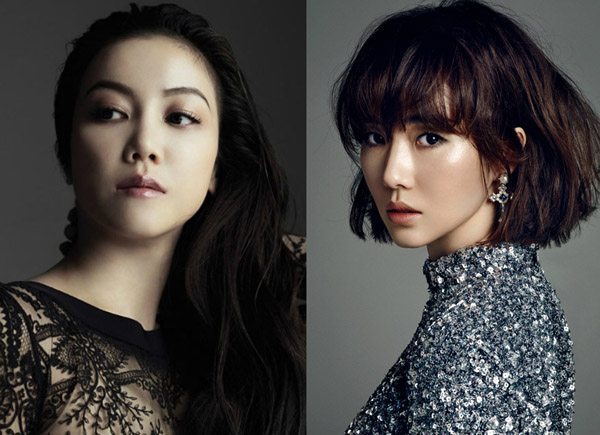 Yikes. We’re about a month and a half away from the premiere of SBS’s upcoming legal thriller Falsify, and the show is still without its leading lady. Recent reports had named Kim Ok-bin (The Villainess) and Lee Jung-hyun (Split, Roaring Currents) as potential candidates for the female prosecutor role, but both the actresses’ management teams have since clarified that they’ve turned down their offers.

The rest of the main cast has already confirmed their roles in the show, and Namgoong Min (Chief Kim), Yoo Joon-sang (Pied Piper), and Jeon Hye-bin (Woman With a Suitcase) have already begun shoots for Falsify. This isn’t the first time a drama’s had trouble finding a leading lady, and if I recall correctly, Park So-dam didn’t join the production of last year’s Beautiful Mind until less than a month from the show’s premiere. But, well, we all know how that ended.

Which is unfortunate, because I think the cast they’ve already assembled is a really strong one, and I’m looking forward to a show that includes both reporters and prosecutors, when so often it’s one or the other. I do have to wonder at this point, though, whether there’s something about the story or character that’s preventing Falsify from confirming an actress for the prosecutor role. Or, it could purely be just scheduling conflicts: Kim Ok-bin’s busy promoting her film The Villainess and Lee Jung-hyun is due to start making the rounds on the press circuit for her upcoming blockbuster film Battleship Island. Well, I hope that SBS manages to find an actress soon, because July’s going to get here sooner rather than later.

As of now, Falsify is supposed to follow My Sassy Girl in the Monday-Tuesday slot on July 24. I haven’t asked myself this in awhile but: What would Anthony do?

Ohh, Yoon Joon-sang was so awesome in Pied Piper. It was one of my favourite dramas that year, I found it so riveting. And I really enjoyed Namgoong Min's past two performances in Chief Kim and Beautiful Gong-shim. Really hope they will find an awesome leading lady soon so that together they will make another daebak drama!

Same here!! Pied Piper didnt seem to get that much love tho

Totally agree. Pied Piper was awesome. It really didn't get much love either here at dramabeans or rating-wise. I think it hovered at about 1%.

I love pied piper too. The leads were great !!

so meaning Pied Piper is another underrated drama (as in their viewership rating in Korea isn't high)....??

Pied Piper was lovely! He was so compelling~

Anthony would probably bully someone into taking it. Or send the poor writer out to beg actresses until they said yes.

SBS gotta put on their WWAD (What Would Anthony Kim Do) hat. Either way, I suspect that the role is a little...flat, which is why it's getting slammed left right and center with regrets. Kind of unfortunate, seeing how the rest of the cast are really powerful candidates :(

Hmm I hope they find someone soon. Even if I'm not into legal dramas, I don't want Chief Kim's next project to be a flop before it even starts. (Can we have a 2PM Junho cameo please?)

I wonder: What is Seo Hyun-Jin up to these days?

It's so bizarre to no longer see your comments in gray. I forget that you're you now with your bold comment like everyone else :D

Oh wow, I didn't realize that grey comments were such a part of my beanie identity! Can't go back now though... but it's easier on the eye, don't you think? In any case, I'm flattered. (Candy life ain't so bad after all). XD

Yay! @wishfultoki has come over to the 'dark' side! ?

I also thought of Seo Hyun Jin. Maybe she can try a role like this which is different from her previous dramas. Can the staff offer her this role? Based from their choices, they were looking for actresses who are mostly seen in movies.

I wonder how often people overlook SHJ when casting... She should be considered and offered a lot more roles.

She did mention she was going to pick a new drama (most probably a melo, based on her answer to fans on what kind of project she wishes to do next).

But recently there was a report that she would go FA once her contract with her current agency ends, which was later denied by her agency. I think if the rumour / report is indeed true, it might take sometime for her to settle the matters regarding her agency first before picking up a new project?

I miss seeing her in a drama though, tho I'm happy she's happy with her break ㅠㅠ

To hear that my beloved actress is indeed enjoying her break sounds so good it immediately refreshes my soul. I so like her to be like this in her real life. I think it's very normal to try to grasp as many opportunities as you can once you hit it so big like winning Baeksang for best actress but look at what she's doing, she is just living her life like nothing has happened and enjoying her free time as she is free from all the burdens in the world. Wow.. just wow.

Oh.. how your comment makes me wanna reply so much 'cause it mentions many names I miss! Yes, I do hope this is not gonna be a flop one for NGM since he is so good in most, if not all, roles he has played. I respect the efforts he put in all his projects so much I don't want anything below great happen to him. And for 2PM Junho as a cameo I totally buy the idea. How cute the two of them have been together in Chief Kim! Just seeing two of them together should help make my soul much more happy.

For Seo Hyun-Jin oh Seo Hyun-Jin.. mentioning her makes me miss her so much. I'm still listening to Another Miss Oh's osts even nowadays! SHJ there is just superb. She possesses the role and making the role hers. I remember her giving her interview to a source that she felt connected to ordinary woman roles the most so I hope she get what she wants for the next projects. SHJ to me is an epitome of looking ordinary but so charming you cannot your eyes of her. I hope to see her much more in the near future.

What I heard is the female lead role is not interesting enough for these chungmuro ladies to take it.It could be something like Yuri's role in Defendant. If this is true, I don't want Seo Hyun Jin to take it. It better goes for underrated talents who need more exposure.

I think SBS may be a little overambitious with their casting, and has been too vocal about their choices too. They should've just kept quiet about it. I also wonder if the character is just not appealing enough to entice these film stars to return to the small screen.

Yes. I actually don't know them since I do not watch a lot of korean movies. They were looking for a movie star. There's a lot of choices if they just offer it to drama stars like Seo Hyun Jin.

They should give the opportunity to an up and coming actress (e.g: Nam Jihyun) instead of trying to lure big names and failing multiple times.

Is it that hard to find a lead actress?

No SBS sometimes think that they are tvN.

It'd be nice if they just upgrade Jeon Hye-bin to lead or give it to Kang Han-na.

kang hana or ryu hyun kyung if could choose..

I was wondering the same thing..

Aw, I was looking forward to this :(

This is one of those cases where I wonder: are more actresses turning the role down than is usual, or is SBS just being too open about the casting process? With a show whose cast is otherwise very solid, too. Hmm.

You forgot about the possible issue of ₩ lol

Yes please make JHB the lead instead. She deserves this.

Soo.
I think somebody's forgetting something.
Kill me heal me got its leads at last moment.
Same with MDBC, who searched a whole lot long for a female lead and then the actor doing KDY's part left and they had to reshoot the scenes (drama was supposed to be pre-produced)
And Ji Sung and the cast of Defendant took so long to commit that RDTK aired before, and after that the actress who had been considering for months said no, so they did a last minute casting Yuri.
And a month before Suspicious Partner was without a female lead and every actress was saying no.

MDBC never supposed to be pre-produced

Park So-dam joined Beautiful Mind late because of scheduling conflicts, but I believe the production went for her from the get-go. Interestingly, it was the male lead that went on the merry-go-round, running the gamut from Kim Soo-hyun, Yoo Ah-in, Lee Jong-seok and Choi Jin-hyuk before settling on Jang Hyuk.

So... if Beautiful Mind is anything to go by, it'll be fifth time lucky. We've had Chun Woo-hee, Kim Ok-bin and Lee Jung-hyun... two more names to go?

two more names to go so it'll be settled lol

I'd like to see Lee El in something, and I think she'd pair well with Namgoong Min!

I think she have more way to go to be female lead :(
but I'd like to see her more often. she should be 2nd lead first I guess.

She pretty much made Monster watchable. And of course she slew in her role as the mother goddess in Goblin.

How about Seo Ji Hye? She is pretty underated. I love her in Punch.

She is indeed underrated and she is sooo awesome...

I'm currently watching Punch and So Ji Hye is so badass. Why isn't she in more dramas?

Oh no. Another legal drama? Why am I seeing prosecutors and lawyers in nearly every kdrama nowadays ?? Is the theme for 2017 "LEGAL"??? Maybe next year it will switch back to being medical ? Lol.

Oh god no I hope we don't go back to medical. If anything I'd like next year to be about slice of life dramas

Oh no now I'm just wondering if they'll find a way to squeeze a Subway into a sageuk... Omg worst nightmare.

there's quite a number of time travel dramas this year too....

Goblin made Subway the food of the gods, literally.

Howard Alken of Harward University designed the automatic sequence controlled calculator - the initial mechanical computer.
The Dell Vostro A840 includes a hard and durable exterior coating that assists it from getting
scratched or dented during everyday use. The receiver from the call retrieves the content by
calling into it and entering an electronic digital code.