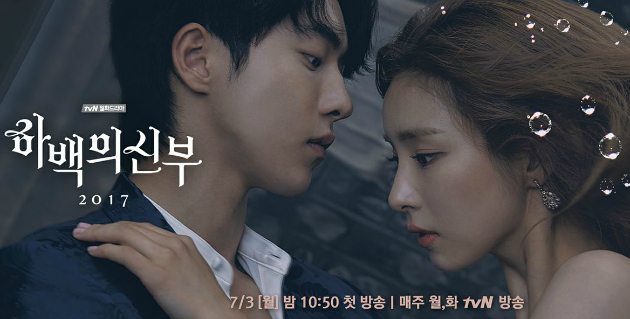 The new drama cycle is revving up, and we’ve got one early bird premiering ahead of the pack. Fantasy manhwa adaptation Bride of the Water God 2017 is on its way, heralding a brand new crop of shows that’ll hopefully be as good as the last. Or wait, should I be hoping that there will be fewer shows to capture my fancy and suck up all of my time? Nah, why on earth would I wish for that?

Reasons to watch: Bride of the Water God 2017 is taking an interesting approach by making its drama adaptation a spinoff set in 2017 rather than staying faithful to the historical setting of the original work, and the thing I’m most curious about is how this modern-day version will put its own spin on the beloved historical fantasy manhwa. Frankly there’s no better writer for the job than Jung Yoon-jung, who adapted Misaeng for television and also penned the fantasy historical drama Arang and the Magistrate, full of otherworldly realms and capricious gods. Combined with a stylish directorial flair from PD Kim Byung-soo (Bubblegum, Three Musketeers, Nine, Queen In-hyun’s Man), I expect the mythology and world-building to be done well.

Nam Joo-hyuk stars as a water god named Habaek who finds his bride in 2017, and more than the romance, I’m looking forward to the fish-out-of-water antics from the mighty water god who can’t seem to navigate his way around newfangled gadgets and busy city life. Despite the fact that he refers to his bride, Shin Se-kyung, as his “servant,” she assumes he has mental issues and seems to pity him. It’s reminiscent of the relationship in Rooftop Prince, where the hero is an imperious Joseon prince who becomes a useless baby when he time-travels to the present day, so that’s a reversal I will enjoy immensely. I guess I just like my gods brought down to earth and made human, warts and all.

Crossing my fingers and toes on this one. I hope it doesn't disappoint.

Me too. I fear for the acting but I try for the writing and directing.

I'm gonna give it a try since I love NJH.

A whole lot of pretty! I hope the drama won't disappoint. ??

I wish I would be able to like this show. I am slightly cautious because so far none of the leads managed to impress me much. They are ok, but their acting never left me breathless. I just hope...

I'm another cautious viewer too. Though the story and lead cast doesn't intrigue me, I will give it a try for the first few epi.

Secret Forest Bought me back to TVN after 6 months.
I am really hoping that this one will keep me in TVN landia.
And then, if I get in the mood for dark, I can keep being there with Criminal Minds.

Okay, gonna try watching this because I love the writer and the director. Misaeng is a well-made manhwa adaptation while Nine and Queen In Hyun's man directing is just stylish and on point.

Finally! My Nam Joo Hyuk is back on screen again :) I still have doubts about his acting but PLEASE BE GOOD!

Let's do this Shin Se-kyung. I am loving the picture above, I feel the chemistry oozing out. Hopefully, this drama is good.

Oh. I didn't know it was written by the Misaeng writer, and fish-out-of-water. I didn't have any interest in it before (hey, I saw that blue wig!) but I might have to try it out after all.

After seeing a gazillion teasers, stills and bts (yes bts even before the drama airs), i am not getting a warm fuzzy feeling that the drama will be at par with Misaeng or Goblin. Production wise, I'm not thrilled with the cinematography in the same way as Goblin. I am comparing to Goblin because there were claims it will surpass but I doubt it. Acting is lukewarm ... one of the things that makes a great drama is how the audience relate to the characters and how the actors make the characters lovely ... I am missing that feeling unlike Misaeng which is a no frills drama but you'll be drawn and love the characters. But we will see if it wows or disappoints tomorrow.

Does it have to premiere on Monday/Tuesday??? Just pile the shows on those days why don't ya! Haha. Definitely checking this one out. Hopefully optimistic.

how fortunate cos I don't have anything on Mon/Tue (i tried almost all & drop them) and am hoping this will fill the blank.

I come knowing nothing about the manhwa, so hopefully that will help. Looking forward to this! Please be good...

Me too. I know nothing about the manhwa.

Lovely! I do have high hopes for this one...

Haven't ever actually seen anything with NJH, so to me, he's a blank slate. I rather like SSK, although I must say that I REALLY hope her tendency to stare blankly and uncomprehendingly for minutes at a time can be reined in. It's a bit much when the viewer starts wondering whether her operating system crashed and will have to be rebooted. Wrong drama for that, here. ;-)

That's the thing! I first saw Shin Sey Kyung in Blade Man and although I didn't mind her much, I kept wondering if a different actress would have been better. She just tended to be blank even at times when she should be warm.

She's got the same blank/blank pout look on her face in pretty much all the promos for this drama. I've never actually seen any of her dramas, so perhaps I should try this one to see if it's just the photographic stills.

But it's hard to get myself motivated when NJH is so-so (IJH will outact him), the styling is atrocious (not NJH's fault, but his water god look is ridiculous) and SSK just looks blank. The only draw is the writer (and IJH). I'll probably wait for the recaps first. Hmmm.

You perfectly described how I think of SSK acting. It drives me nuts that I don't know what feeling she's acting as of the moment. Unfortunately, from the stills I've seen, it looks like she's at it again.

I'm here from NJH though. He looks so handsome in that blue hair.

I'm cautious with the story flow cause I've read the manhwa but now that gf mentioned that this could be a Rooftop Prince kind of antics, I am curious.

I'm just hoping Joo-hyuk doesn't disappoint~ Saw him first in WFKBJ and he glowed; planned to watch School 2015 but the reviews and acting criticisms stopped me, haha.

I think you should still watch but for Yook Sungjae this time. He did really well in this drama. I loooovvvveee him here.

I'm so excited for this! Glad to have Shin Sekyung back in dramaland.

I love fish out of water hijinks. The trailers were a fun watch plus I enjoyed the previous works of the PD and writer. So I will definitely be checking out this show.

I just watched the 5 mins trailer, personally I don't have any expectation for this drama. Maybe this works better, so I will be happy with any surprise I will get from this drama.

I think I'm gonna check all of July dramas premiere, and pick 1-2 dramas which pick my interest the most

Sounds interesting. Will definitely be looking forward to it.

Adding this show to my Monday line-up! Really hope it's good since I have high expectations from this writer-producer team.

I swear I read peacock watch....maybe because Nam Joo Hyuk's attire in the show ??

I really hope this will be good because I have nothing to watch right now. I feel like this year I barely watched anything because there were just so many dramas involving law and/or murder and I find that really boring.

I was skeptical at first if I should give this is a try since its predecessor Circle is just so good... But after knowing it's from the writer of Misaeng and PD of Queen Inhyeon's Man, hmmm. I just hope they can really pull it off.

I am so excited about this...NJH is so beautiful, love his long lean body, so much grace in such a tall man.

When you already clicked the 'favorite' button without even seeing the episode 1. Lol. I just love NJH and nothing can changed that, I will stick with this drama worse comes to worst!

Oh yeah, totally checking this one out. Predictions have been made ever since the spinoff drama and the cast were announced. I cannot wait to see the real deal tomorrow.

Shin Se Kyung acting actually looks ok in the trailer. It's Nam Joo Hyuk we should be worried about, his acting looks like reading from a book. Why is everyone criticising the actress who's actually better than him....

The leading lady is the girl i come to know as the actress who lacks facial expressions. I didnt like her in 6 flying dragons and also in when a man loves. *crossing fingers*

I don't care whether it's a spin off or whatever... I am just gonna give it a chance because it shares the same name of one of the best manwha i have ever read.. I know i will be disappointed somewhere but it can't be helped...!!

Because of the writer-nim of Misaeng, I'm definitely giving this a try. I have seen bts cuts and saw how hard-working and talented the writer-nim is. However, the director also played a huge part in creating Misaeng the way it is. I will be another cautious viewer of this show then.

For NJH I only saw him in WFKBJ. I think he has 'the' look of a god as well as the charisma. I just don't know if he is old enough to portray such role and don't know if he can successfully project his charisma through to the viewers, and to the lead lady ofc.

Nice team behind. But dislike the main leads acting so much... so pass !

I hope all the pretty and the writing will be enough for this! I'm so looking forward to it, but I'm trying to lower my expectations so as not to be disappointed.

Well, I really liked part 1 of its OST ... so here's me ? that acting, writing, and artistic direction align to wow us all! ツ

Love Nam Joon-hyuk! This should be interesting because so far all the trailers portray a very serious powerful character. Will there be a light-hearted side to the Water God?

OK just watched the first ep and laughed through the entire thing. Such strong Thor vibes I'm looooooving it

I already watch the episode 1,but why I cannot into this drama,even with good actors/actresses there i think I wouldn't continue to watch ,poor me

Ever since the news came out back in 2016, I've been really anticipating it and even more so that Nam Joo-Hyuk is starring, but... After seeing the teasers, and the awkward chem with Shin Se Kyung, I'm really hesitating... But it's the writer from Misaeng and the director from Nine... So.... ughhhhhh mixed feelings begone