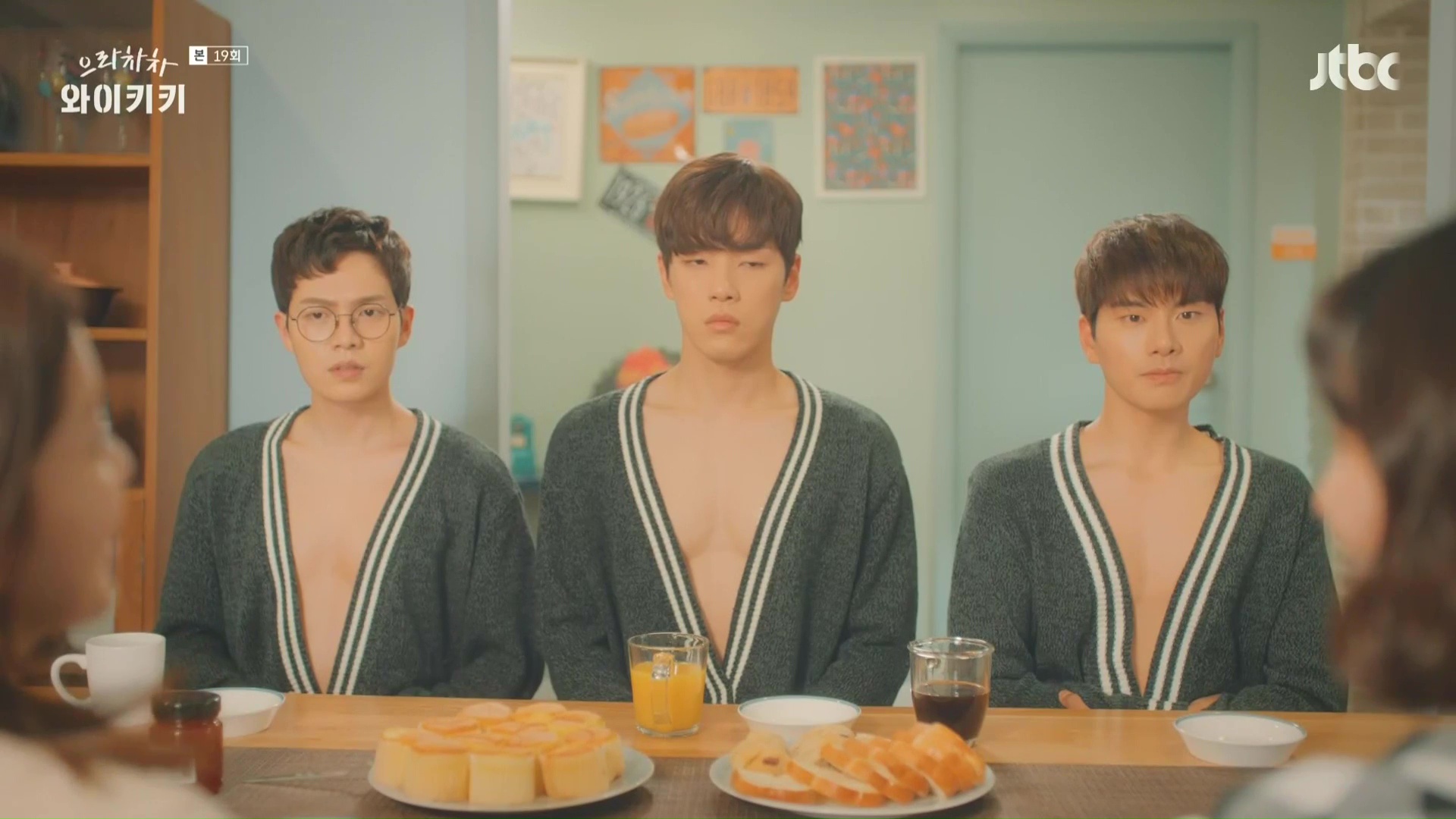 When I read this month’s theme I thought, “I have to do this,” because one show immediately came to mind. It just seemed like such an obvious answer to the question, and it truly would be wonderful if it were actually to happen.

K-dramas are usually complete. They are like novels and once you reach the end of the story it is finished. As much as I would have loved a second season of Because This Life Is Our First, that story is, in fact, complete. There really is no way to make a second season. In order to have a second season one must be able to see the first show as incomplete—that further developments are possible.

Woohoo Waikiki is that show. This is because it was not simply a romantic comedy which is resolved when Yoon-ah and Dong-gu get together. Waikiki was a pure comedy, with our characters getting into all sorts of funny situations, not only over romance, but also in their struggle to make a living and build careers. Aristophanes would have appreciated both the broad humor and moments of sheer pathos—those moment which just grabbed our hearts and made us love these people. Like the moment during the fake wedding when Dong-gu sees his bride. 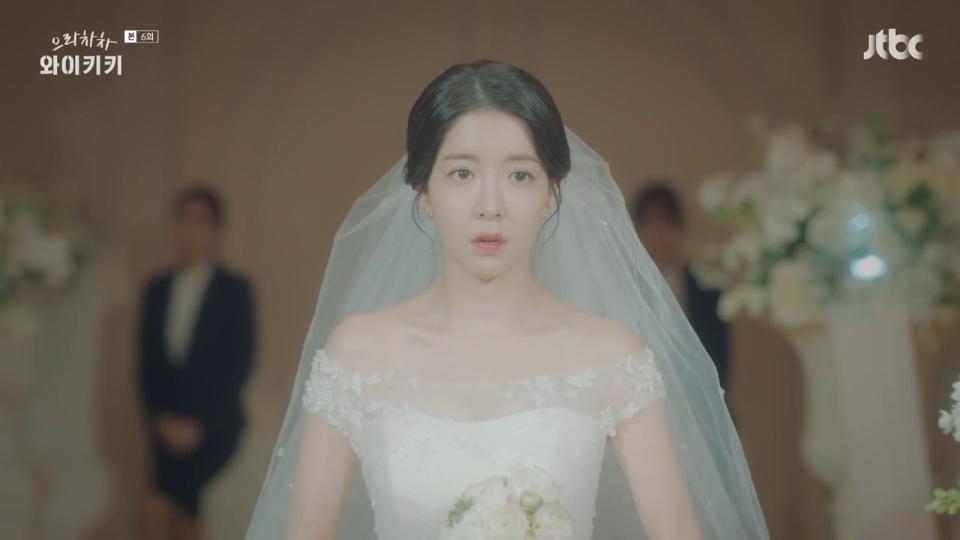 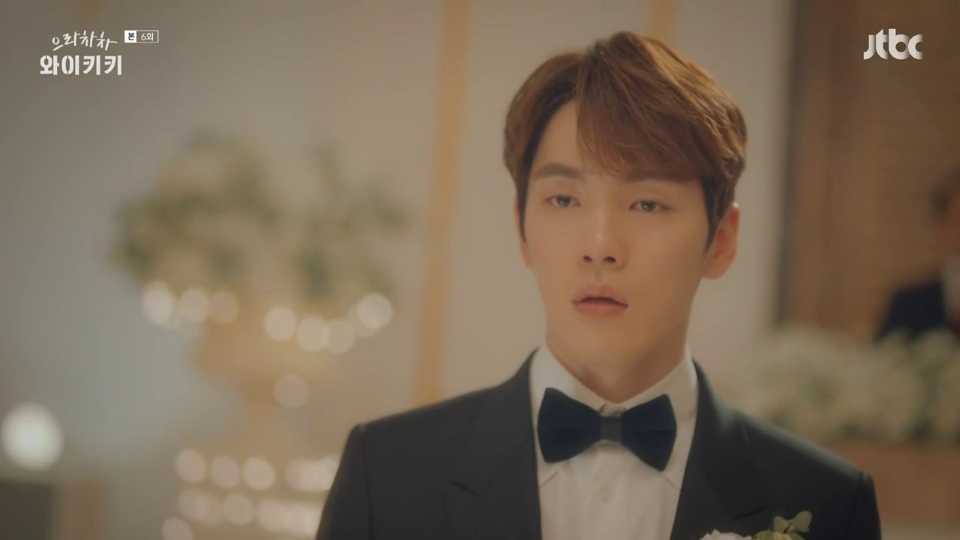 I think we all know that this was the moment when Dong-gu fell completely and irrevocably in love with Yoon-ah. Just think—they can tell their grandchildren that they first kissed at their wedding. Because even though it was a fake wedding at that moment, it really wasn’t—it was just premature. I am reminded of the lines that end Lie to Me: “At first it was a lie, and then it was a dream, and then it became real.”

The truth is that Dong-gu and Yoon-ah really are already married (they should just go get it registered). But now they need to learn to live together as a family with baby Sol. There is a lot of comic potential in such a story: In the Japanese comedy Mischievous Kiss: Love in Tokyo, the wedding ends the first season. The second season is the story of the first years of their marriage. (Sadly, the Korean version, Playful Kiss, chopped most of that off; the Taiwanese did not make that mistake in their version…) Of course both of them still need to make a living and baby Sol will be getting older and into mischief.

As far as romance, neither of our other two couples has fully worked out their relationships yet. We have the potential for two more weddings here. But will they happen?
Some of the funniest moments in the first season were related to the struggle to find or advance careers, or even just find work. Remember when Joon-ki became an internet sensation thanks to a wardrobe malfunction during a home shopping commercial? There is no reason why Joon-ki could not have many more adventures as he tries to put together a future for himself and Seo-jin. 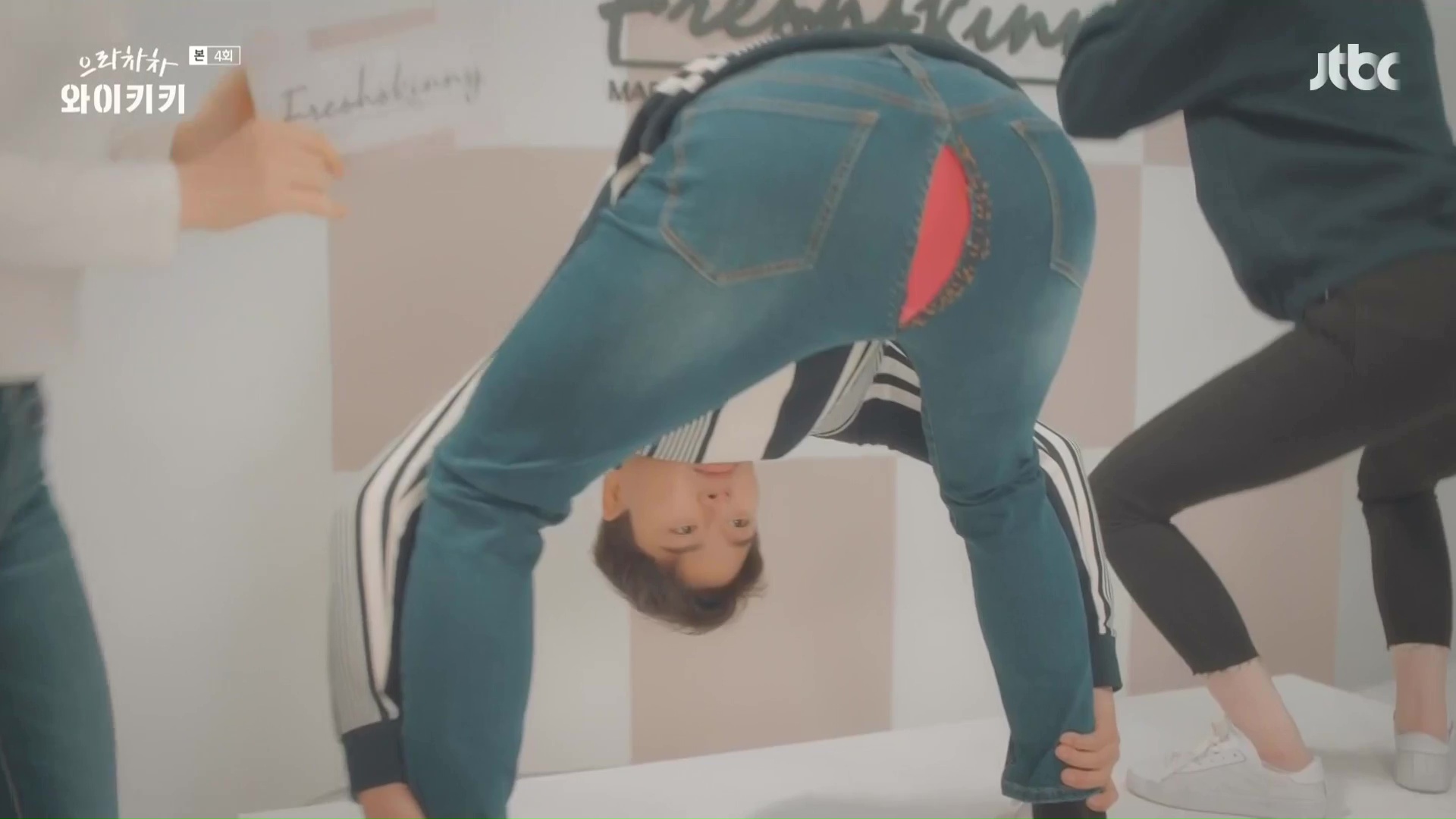 At this point Soo-ah has confessed to Doo-shik (while sedated), but has Doo-shik really reciprocated? That too is yet to come. I don’t think it could possibly top Yoon-ah’s video confession to Dong-gu. For anyone who has ever wondered what the word aegyo means, just go re-watch that clip. It is a perfect example. 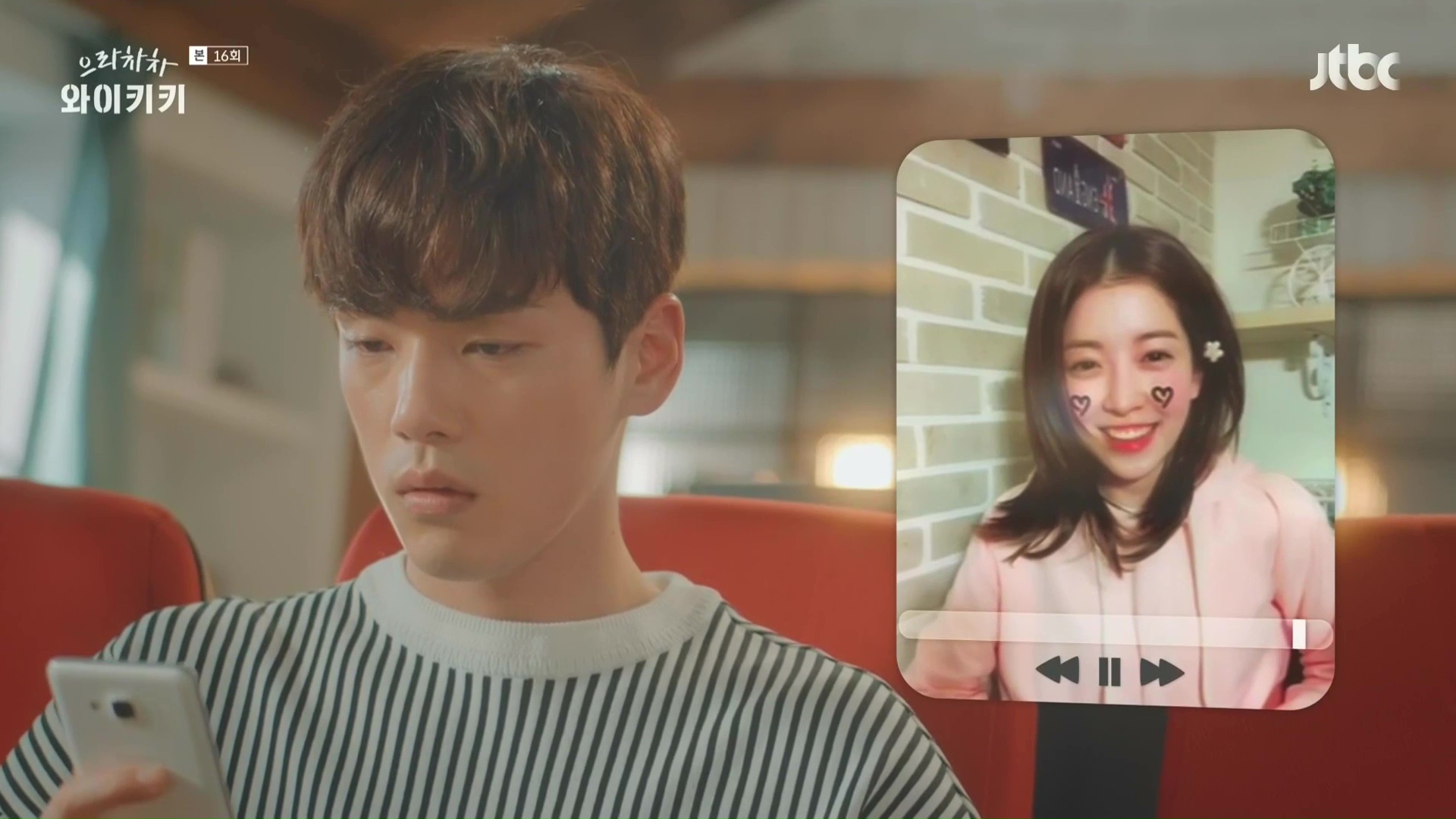 With Doo-shik, I think that the writers could rightly find something both ridiculous and equally touching. Doo-shik’s character just lends itself to that. For that matter, when Joon-ki proposes marriage to Seo-jin, he will probably have to do it more than once, as one plan after another backfires.

Woohoo Waikiki is a slice of life ensemble comedy. You may have noticed that I have not tried to write a script or devise a plot as such. The first season had a sort of organic growth to it rather than a tight plot. That is why a second season is possible. Each character and each couple simply need to continue to deal with life as a continuation of what has gone before while taking the next natural steps in life. This is why Waikiki can have a second season: These characters naturally have more life to live, making possible more touching moments and belly laughs.

And, of course, we would get to have have lots more cameo appearances by just about every major actor in K-dramaland. 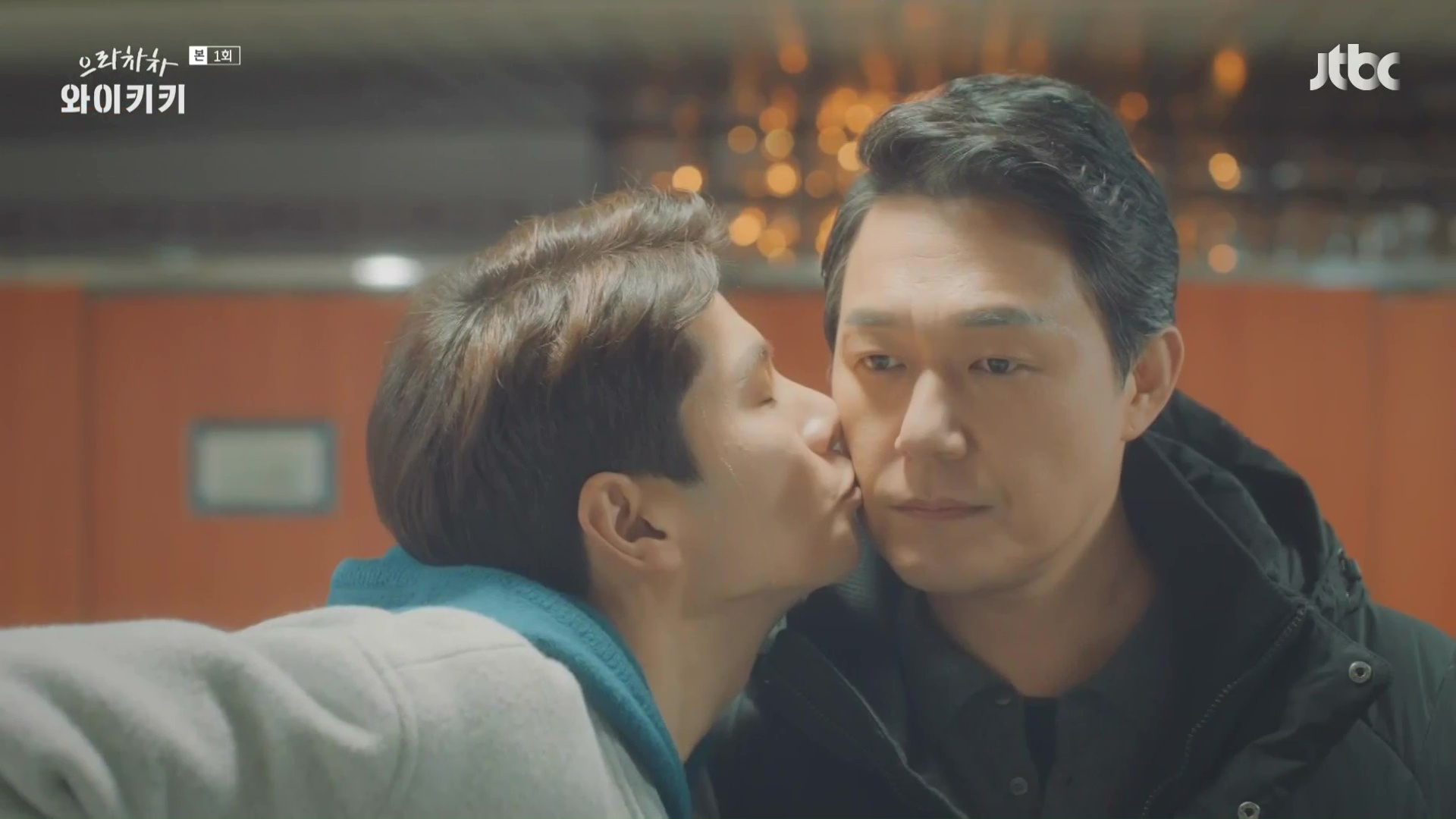 My one very small quibble with waikiki was they spent too much time on the love triangle, which was initially funny but later on just dragged. They could've spent more time on DS and SA's developing friendship and love, while also figuring out their careers. While the confession was sweet and funny, it was too little too late IMO. So I would love to see a second season, just for that. Thank you for writing this.

Ahhhhhhhhhhh, thank you for this writeup!! @oldawyer

Woohoo Waikiki and those lovable dorks with their shenanigans really brightened up my spring. I miss them and their heartfelt moments.

"For that matter, when Joon-ki proposes marriage to Seo-jin, he will probably have to do it more than once, as one plan after another backfires."

Would watch an entire season of this, TBH.

I would too! They're hilarious! Joon-ki would start with a tiny white lie and it will snowball into something complicated and huge, half of Seoul will be involved, and he'll be a humiliated mess at the end. As usual. XD

Part of what is so very lovable about Joon Ki is that he remains resilient and undeterred after all his ill-considered ventures and ridiculous mishaps. He's like Wile E. Coyote (except not a predator)!

Can't wait for the sequel! Although everyone in the cast seems to be busy now, so I hope their schedules all align at some point.

And you're right, we'll need a lot more cameos. Hopefully the real Lee Junki can do one this time!

DIBS ON RECAPPING THIS!!!

I loved this show but can't envision rewatching it. That's odd for me though because I'm an avid rewatcher. I would, however, jump at the chance for a second season. This show reminded so much of How I Met Your Mother and Scrubs (minus their respective tragic finale seasons).

I saw the title and went immediately YES! But our wishes have come true, and season 2 is coming. In the mean time, all we have to do is sit back, and hope season 2 warms our hearts just as much, if not more as season 1.

Didn't Woohoo Waikiki get confirmed for a second season or was it in a dream?

*les miserables voice* And it isn’t a dream... not a dreeeam, after allllllll!

Thank you for that information. I am absolutely thrilled to hear it.

:) Isn't it grand? None of the cast confirmed yet, but! In the works!

Right after waikiki ended the actors playing junki and yoonah announced they were dating and right after they announced a second season they confirmed their breakup. It's going to be awkward for them lol.
Hope they use the same actors for the second season though.

Omo can't wait for the second season. I agree with all you said, these characters are so real, it feels like we're living with them, so it makes sense for a season 2, since their stories are not finished. I hope it goes the way you said though, with lots of shenigans from the team. Hopefully we get to see more of the girls bonding.

I agree on DS and SA. For their story alone to develop even further, I am all for this show to get a second season. Having the entire gang back is icing on the cake already. :)

I recall halfway through season 1 thinking to myself 'This show has the legs to do a multi-season run', so I'm on the same page as the author here. The greatest danger is the network getting *too greedy*. They had abruptly expanded the first season to 20 episodes so we got 4 filler episodes 3/4 the way through the run.

This drama is on my watch list and this article makes me want to watch it sooner than later!

Very nice article, you have given me another show to add to my list.

I have missed Waikiki so much while it has been gone. It was a really solid comedy. A second season would be amazing, for all the reasons you mention, it is well suited for a new season. But also, it is the type of show where a related spin-off would work, I think. We could see Joon-ki's acting-friend-at-tough-jobs more, maybe he has a group of friends that are basically the parallel universe version of the Waikiki gang, but mostly women? As long as the humor is still there, with a comedy like this, you don't really need the same cast, you just need to recapture that feeling of humor that was funny because it was ridiculous, but somehow totally relatable despite being over-the-top!

Thanks for this well-written piece, @oldawyer! I agree with both your reasoning and your sentiment - and I, too, am pleased as punch a second season is promised. Sometimes dreams do come true. :)

dear @oldawyer , thank you for the fun read!
I haven't watch Waikiki (I tend to veeery easily die of 2nd-hand embarrassment, so this almost-slapstick comedy show was a no-no, unfortunately), but I read through your essay and reeeeally wish for you that season 2 gets made, for all the awesome reasons you listed !