Premiere Watch: Alice, Missing: The Other Side 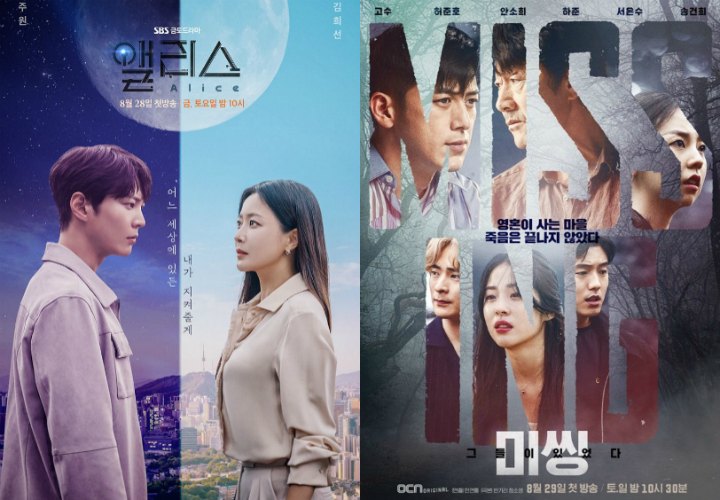 Some interesting dramas are afoot! After a few weeks of pretty straight-forward crime thrillers and melodramas (and their love child, crime-melos), we have two dramas premiering this weekend with the more atypical themes of time travel and dead souls. Both dramas are high on concept, so it seems like a high risk/high reward situation to me. Let us hope we are rewarded. 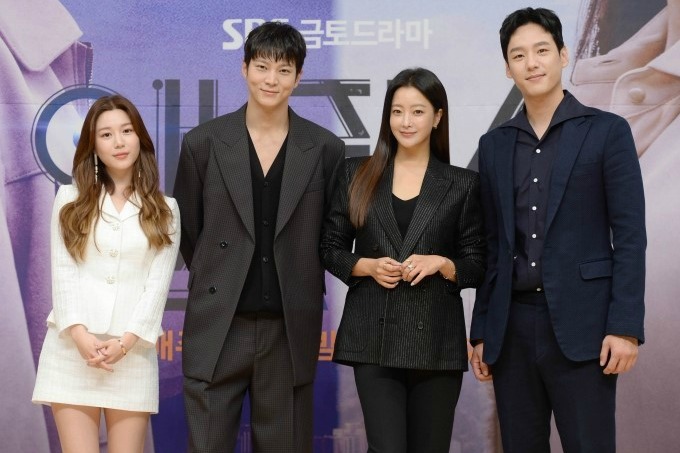 Reasons to watch: It’s always exciting when a new sci-fi show hits dramaland, but that excitement also comes with a moment of pause, since the majority of sci-fi themed dramas have been less than they ought. *Moment of pause* Back to the excitement factor, though, SBS’s drama Alice premieres this weekend, and here are the top three reasons to tune in: Joo-won, Kim Hee-sun, and time travel. The drama’s premise sounds like a complex and multi-dimensional time travel construct, and we have Kim Hee-sun playing two different characters from two different times, Joo-won as her son (sort of, it’s complicated), and a whole lot of playing with fate, time, and the mysteries of physics. I’m not expecting Alice to be the tightest time travel story around, but it’s got enough to intrigue me — and if the characters, emotions, and basic time travel logic is there, and I am good with the details being a glorious tangle.

Reasons to watch: I’m not shy about my feelings on OCN dramas, but every now and then one comes around that surprises me. Could Missing: The Other Side be that drama? It’s being promoted as an interesting blend of fantasy and mystery, though the premise sounds more occult to me — our lead, played by Go Soo, is a con-man who can see the souls of the dead. This leads to crime-y things happening, a village of lost souls that looks as quirky as it does creepy, and basically, a set-up that has a lot of potential to be suspenseful and strange. It also seems particularly ripe for a few good plot twists, but don’t quote me on that.

Tags: Alice, Missing: The Other Side, Premiere Watch

I'm actually really excited for Missing. The premise seems really interesting to me and I'm ready for another OCN show after Train ended haha

As for Alice, I don't think I've ever seen a Joowon or Kim Heesun drama, so I'm not sure what to expect on the whole acting front. But, I'm a sucker for time travel so I'll probably tune into this one as well.

I haven't seen much of Joo Won, but I can confirm that Kim Hee-sun is incredible! This one will be worth a try, I think (time travel is my Kypronite, anyway).

If nothing else, Joo Won often plays very interesting characters, (The Good Doctor, Naeil's Cantabile) but my favorite was The Bridal Mask. I prefer seeing him in roles where he just plays a normal man without any quirky vulnerabilities. ALICE seems like one where he will be a normal man but just in unusual situations.

I'll definitely add those to my (depressingly long) watchlist! Thanks!

Ooops, I spoke too soon. I just read another article about this upcoming kdrama and it says that JooWon's character is one who is "emotionless." So it is another quirky character for JooWon. Though he does those quirky characters well, I just want to see him be a regular guy again.

I have never watched The Bridal Mask despite always reading good things about it. It's going on my plan to watch list.

I'm interesting in both drama.

I'm not a big fan of the actresses in Missing so I hope it won't bother me.

But both will air the week-end, I need dramas in the week too!

Yes, my heart sank when I saw that one of them is that bland, might-as-well-be-anybody actress from Duel and Romantic Dr Kim#1. The other actress was terrible in Train from Busan but was ok in Waikiki#2.

I would like watch Missing live but I'm afraid the Covid-19 will do his thing...

My last venture into kdrama “scifi” (emphasis on how loose of a term this is) was Abyss, and we all know how that turned out... I like Kwak Siyang though, so I might give this a go!

Abyss isn't scifi by any definition that I'm working with (even if you do throw 'aliens' into the script).
Have you seen Circle? Watch Circle.

It’s been on my list forever but I haven’t gotten down to it. I might pick it up when I get less busy!

I’m quite interested in Missing and I consider it much more of a sci-fi drama than Alice, tbh.
I will give it a try to Missing but Alice premise makes me take a step back, I foresee the reasons I may not like it. I’d rather wait for beanies opinions.

You watch Missing and ill watch Alice and we can confer. They both seem hmm to me so we can go from there.

I'm very excited for Alice. How beautiful poster it was.

I like both lead, i like most of joo won drama , baker king, bridal mas n good doctor are really memorable, when i read alice synopsis and early teaser it didn't get my attention but after watch 5 minute teaser, wow...it's really promising my expectation going up

I might want to check out both of these dramas. I am interested, but I also have some reservations.

I'm going to watch both Alice & Missing as I like shows with these type of genres (having Go Soo, Joo-won & Kim Hee-sun are plus points).
I am however not setting any expectations on the time travel element in Alice though....not wanting to have too many 'duh' moments later hahaha :P

I'm really looking forward to Alice. The trailer looked good, and I'm a sucker for time travel stories. Plus, Kim Hee Sun and Joo Won... I've missed Joo Won. It's kind of crazy that he was the first actor to be discharged last year and the last to return to the screen.

Missing: The Other Side looks promising too.

I've missed Joo Won too! And not just since military duty. Imo, the drama he did just before military duty was, ahem, pretty lame. Looking forward to his more serious roles again.

Sci-fi, time traveling are really not my things, but let’s go back to the first sentence above.

I am an OCN guy so it will be MISSING for me and also my first Go Soo drama.
There is a bit of a mystery with the casting of MISSING.
The fine young actor Dong Ha is listed on the cast list for MISSING on MyDramaList:
https://mydramalist.com/53101-missing/cast
This would be Dong Ha’s first drama since his military discharge which I believe was last May.
He is not listed as part of the cast on MISSING’s Wiki or AsianWiki pages.

It looks like Dong Ha is Ko Dong-Ha who is a child actor, not Good Manager's Dong Ha? (according to Wikipedia and AsianWiki)

I really want Dong Ha to come back to the dramaland soon though!
I love his acting!

Thanks @ayalynn123 for the clarification. According to the cast list in AsianWiki it appears that there are two child actors in MISSING: Jang Sun-Yool and Ko Dong-Ha.

Like you I am waiting for the return of Dong Ha to kdramaland. If it on purpose I have to hand it to him because he is off the radar right now. I can’t find anything on him.

Perhaps he googles himself and based on our interest in his return he'll reconsider. Pretty please!

I just found this news!
https://www.koreaboo.com/news/kim-bora-sky-castle-dongha-play-casting/

Dong Ha changed his agency and is coming back to Kdrama land! Yay!

I think I'm going to watch all the time travelling dramas this year! I'm expecting Alice to be really good.

Am excited for Alice. I've loved Kim Hee Sun for the longest time! I've seen one Joowon drama and I enjoyed it a lot even though the script didnt have much going on but he held the entire series together.

Will tune in for both of them as i'm actually quite anticipating them especially Missing...

I'm a fan of OCN mystery dramas, and I always loved Heo Joon-ho's work, so definitely I'm in.

I'll try Alice basically for Choi Won-young.
Because I LOVE HIM! I have to give it a shot at least.
And PD is Baek Soo-chan who directed Into the World Again, Beautiful Gong Shim and A Girl Who Sees Smells, so maybe some cuteness in Alice too?

oh noted on the PD for Alice,,I might tune in then.
My brother only watch some kdrama and only liking 3 of them: Vagabond, Memory of Alhambra, and A Girl Who Sees Smells, and he liked that last one has a good mystery/thriller aspect so I guess the PD done it right. I don't watch that Girl drama but from some clips I've seen it has good aesthetic element, so I would love to see Alice that is mysterious and prettyy.. fingers crossed.

Oh I absolutely loved the first two episodes too!
This drama is like a suspense version of Hotel Del Luna.
I'm sooo looking forward to ep.3!

I'm excited for Alice, I have missed Joo Wan. I'm going to check it out. I just hope it keeps my interest. I have been the Queen of dropping dramas this year so fingers crossed that this one will be good,

Does anyone know what happened to Do Do Sol Sol La La Sol? It was supposed to come on Netflix (in USA) this week, but hasn't shown up - I had even saved it with a reminder when the trailer was shown as "coming soon". Did it get delayed for broadcast in Korea? Am looking forward to Lee Jae-wook in a lead role, since I loved him in WWW and Extraordinary (sad that he was the bad guy in it!).

I just watched Alice. All I can say Joo-Won and Kim Hee-Sun didnt disappoint and the story plot seems interesting. It gives me a bit of the Terminator vibes for some reasons.

The first 2 episodes were great.
Terminator vibes. Yes, that's what I was thinking too!

Who is the heroine and hero of this drama please reply