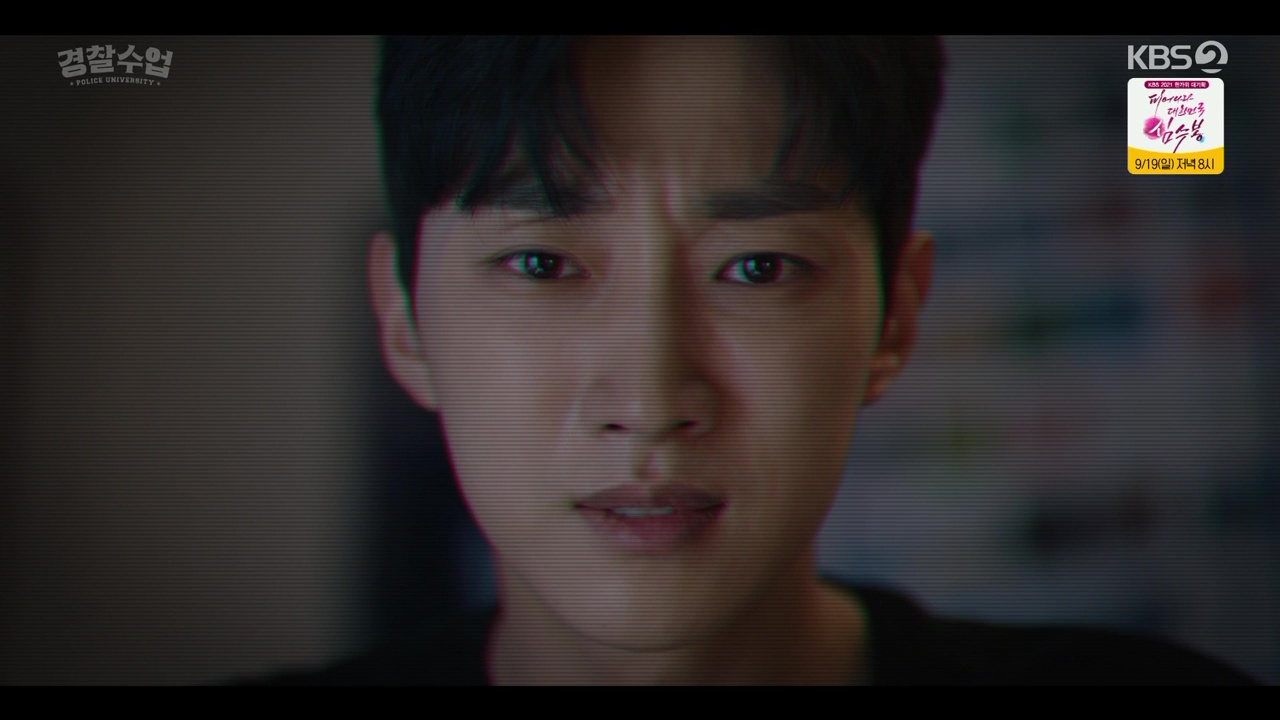 With the culprit caught in a blaze of glory, our crew of professors and cadets try to resume normal life. But something doesn’t seem quite right, whether it’s the mystery that still hangs in the air, or the outright threat that’s now facing our favorite hidden hacker. 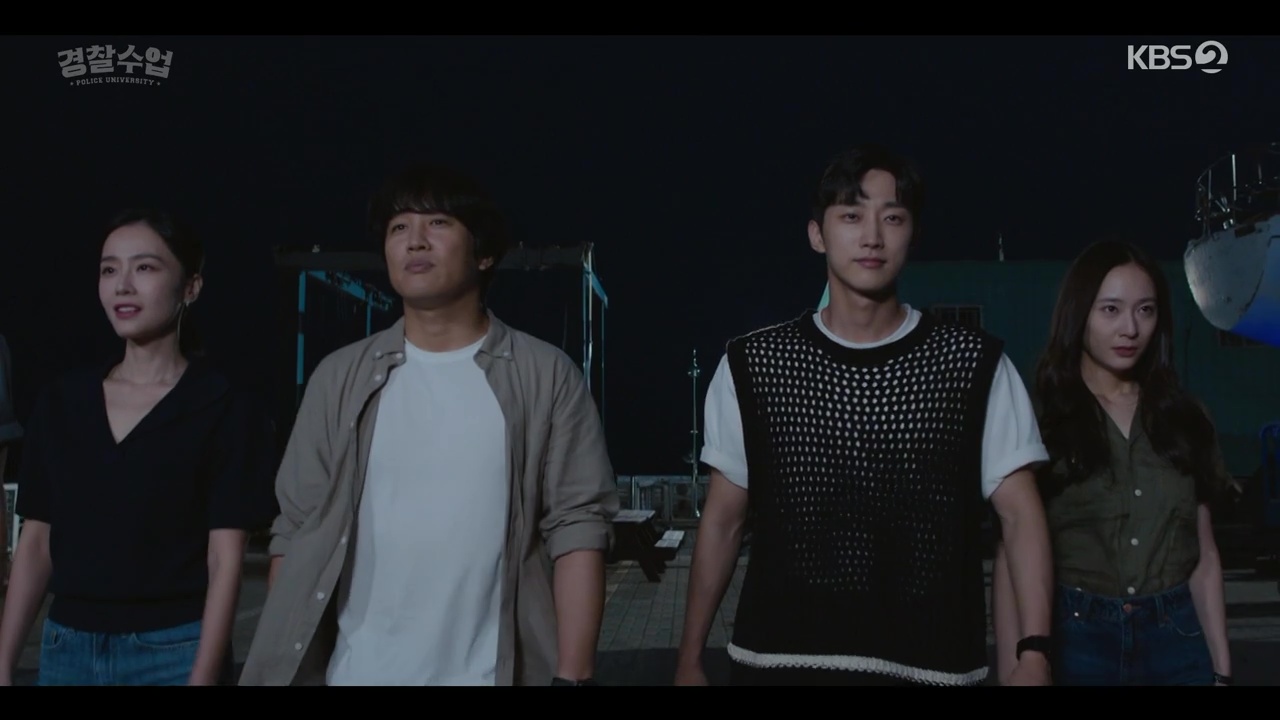 The takedown of Professor Go, while satisfying, also left us with the knowledge that there was a little more to the picture than we were seeing. He might be apprehended, but a nearby baddie escaped — and Professor Go successfully ditched his phone without anyone noticing (so much for the crowd of police officers and cadets all around).

Our cadets decide to celebrate their victory and head for a day trip to the beach. They frolic around like the cute puppies that they are, and our budding couple gets a bit of alone time, first hand holding and shopping, and later stranded there, courtesy of Joon-wook and Bum-tae. There isn’t much plot significant to all of this except that we see Hee-soo and Dong-man come to help them, and we’re all lured into a false sense of security. 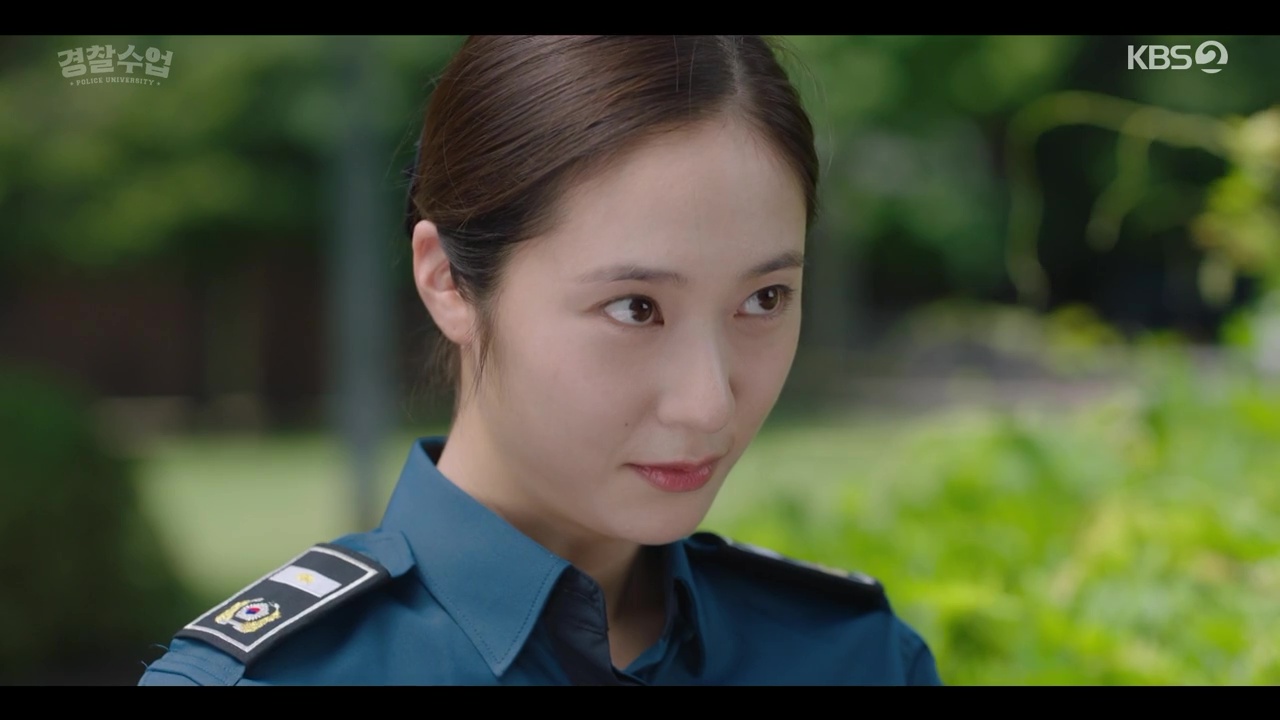 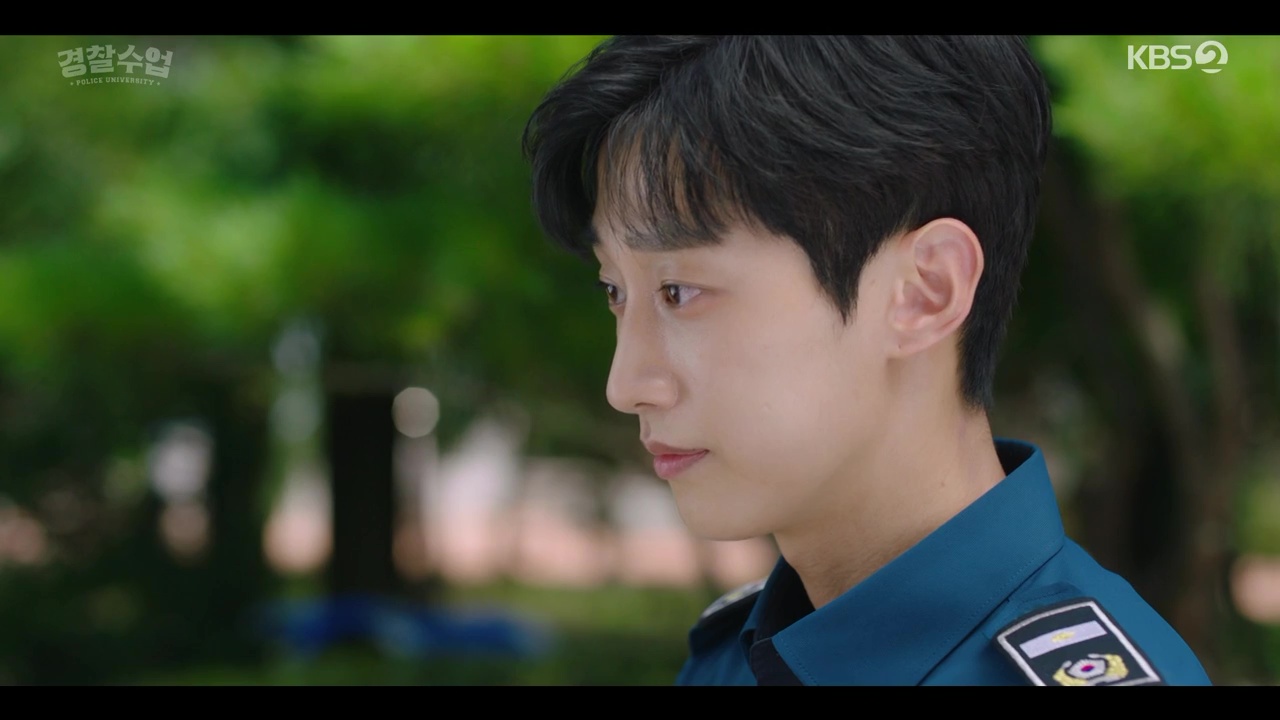 A new semester starts at the police university, and much to everyone’s pleasure, Dong-man’s resignation has been rejected, and he’s back as a professor. Everything seems to be going on swimmingly, except for Sun-ho and Kang-hee’s silly misunderstanding.

A jealous classmate teams up with Min-kyu to prank the couple, and Kang-hee mistakenly accepts an expensive bracelet from Min-kyu thinking it’s from Sun-ho. Sun-ho is inches from despair, but the two clear this up pretty quickly, making me wonder why it had to happen at all. (I would much rather just watch them being cute, training together, and maybe kissing on the bleachers where they always meet. Is that too much to ask?)

Things seem a little too normal, and a little too plotless… and perhaps that is intentional, because out of the blue, Sun-ho’s received threatening chat messages from someone who knows his true identity as Yoon the hacker. 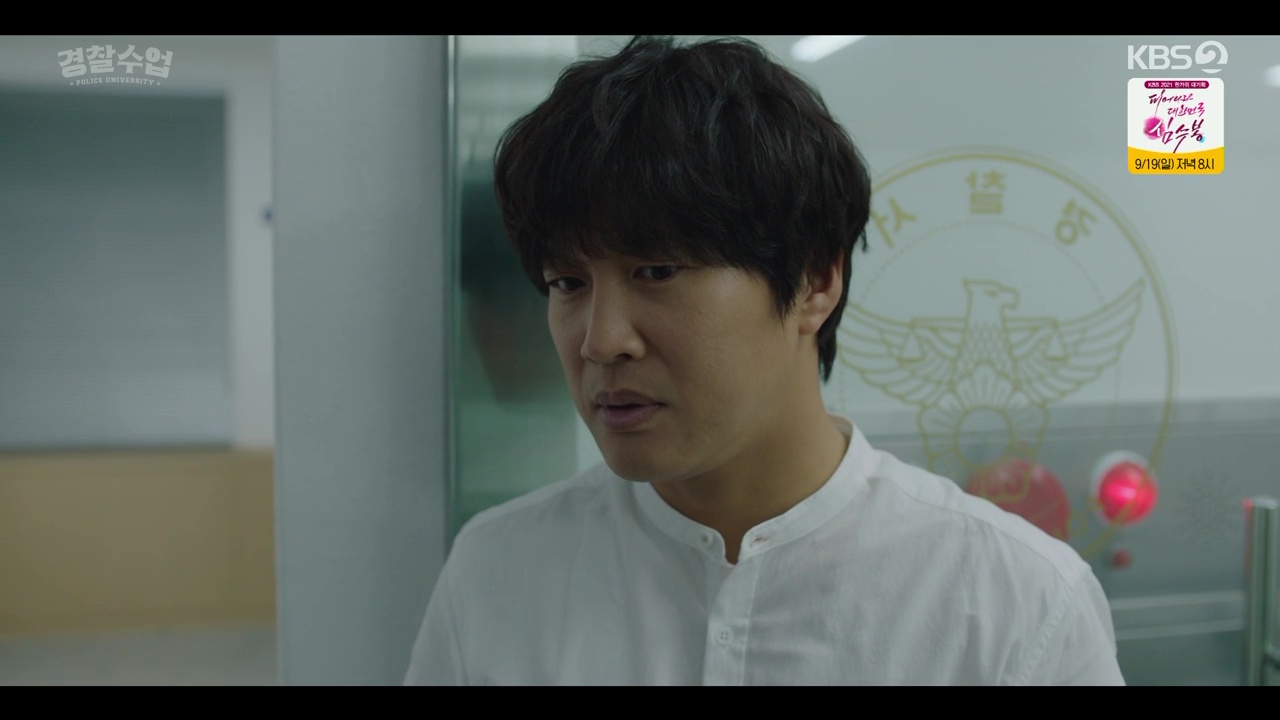 Luckily, Sun-ho and Dong-man are on the same page. Just as Sun-ho realizes that the case is actually not solved, Dong-man has been feeling the same. He revisits the crime scene and actually uncovers Professor Go’s phone. He also confirms (again) that someone at the university is still behind the gambling ring — Professor Go was indeed too low on the totem pole to be the one to take down the ring entirely.

And so, after all that, Sun-ho and Dong-man are basically back where they started. One pawn is down, but the power structure remains in place, and well-hidden. The other faculty members who seemed to be put in the clear in the last week, are all back in the mix, and Dong-man now trusts none of them, all over again. 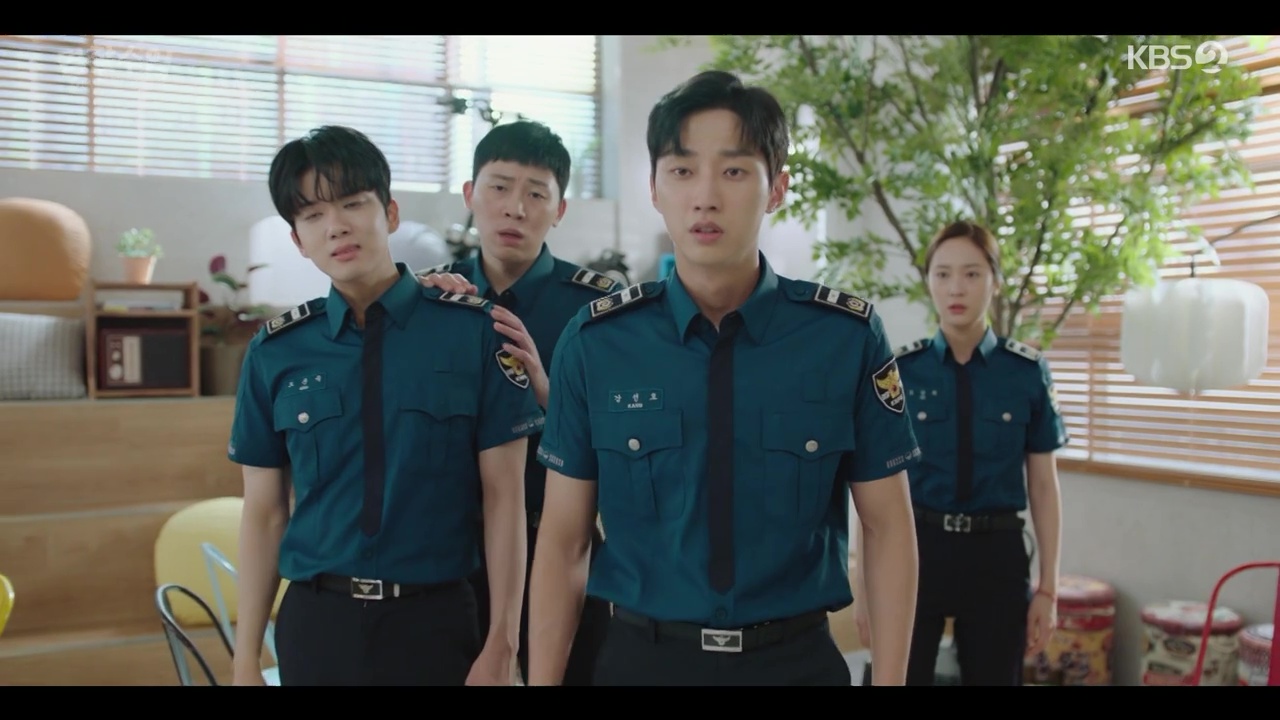 Dong-man first sets his sights on Hee-soo, and after failing to accompany her in the same car, actually decides to tail her and see where she’s going. This leads to quite the Truck of Doom incident, with Dong-man literally T-boned by a huge truck, and later hospitalized and in a post-surgery coma.

Our little crew of cadets is shaken to the core, but thankfully both Sun-ho and Kang-hee are up to speed. Sun-ho, though distraught, reads Dong-man’s case notes which start to link up to what he knows, and Kang-hee, while leaving Dong-man’s room after a visit, actually catches sight of the barcode baddie that escaped from the scene of Professor Go’s arrest. She might not apprehend him, but she puts in an awesome attempt, and the event serves to put everyone’s guard up. 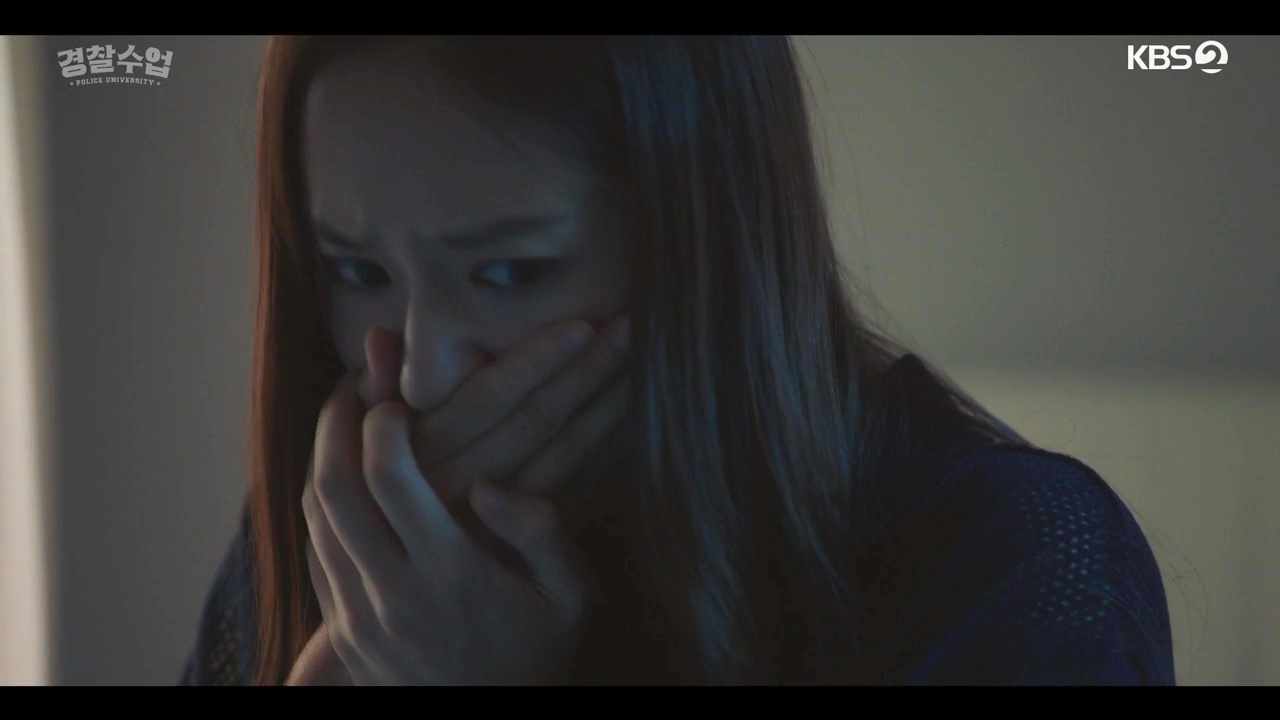 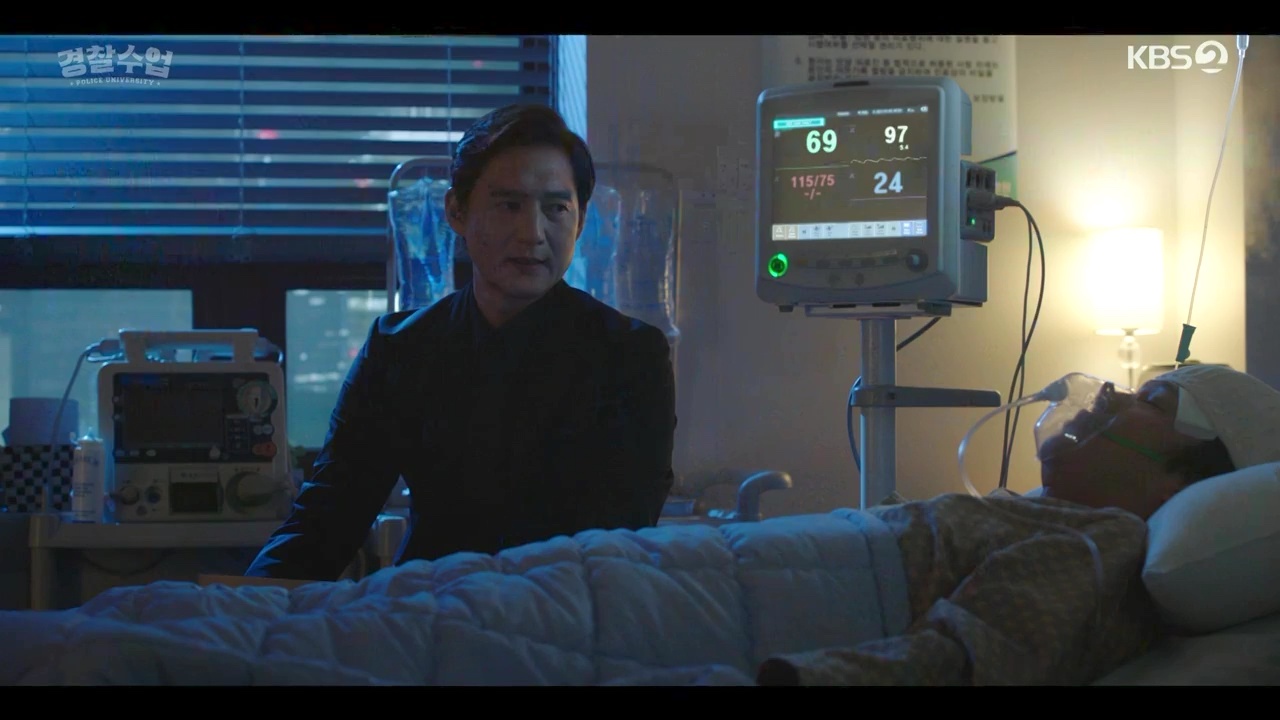 While everyone keeps a secret watch in Dong-man’s room, Sun-ho is dealing with further threats from the barcode baddie and trying to pinpoint his location. It turns out to be a godsend that Kang-hee was hidden in Dong-man’s room, because she overhears the truth: their latest faculty member from the precinct (of whom Dong-man was suspicious earlier) is indeed the one behind everything.

He’s a super villain, it seems, but perhaps not too bright? He tells Dong-man aloud, over his hospital bed, that it would have been better if he had died in the (non-accidental) accident. The problem with bad guys confessing to their evil in the open air? People always overhear them. For shame! And during this scene, it’s two-fold: Kang-hee is hidden in the room and hears everything, and Dong-man, at this point, is only play-acting the coma to save his own life, and also overhears. Throw in Sun-ho closing in on the barcode baddie at the same time, and it’s a nail-biting ending for this week’s episodes.

This cliff-hanger suspense is much welcomed, since our plot did take a bit of a dip this week. Coming full circle makes sense for the hidden corruption of this gambling ring, but I’m ready for the plot to thicken and for something a little more dire to take place. Here’s to the mayhem our next episodes will bring. 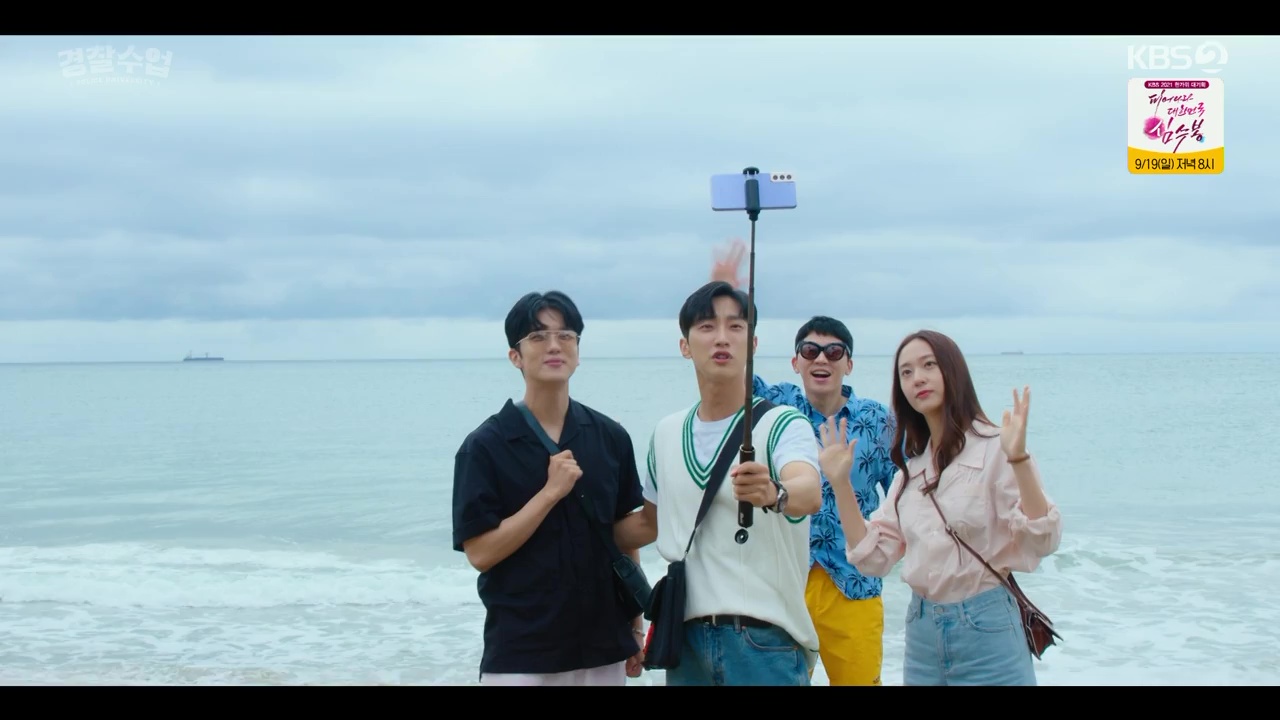 Ah yes the supervising police chief. So really useful that the kitchen was there so she could hide. Also there is a lot of shoddy police work going on, clean it up.

The guy was pretty holding a placard "I'm the villain". They weren't so subtile about it...

I wonder how the Fondation is connected to that and why Hee-Soo is hidding the truth about it.

Although I am happy Kang hee and Sun Ho were able to clear out the misunderstanding by talking it out, I didn’t understand the point of the whole plotting by Min kyu and the other girl. If he was going to confess that he gave the bracelet why create the misunderstanding in the first place?

I don’t understand why Min Kyu is persisting when Kang Hee is clearly not interested at all.

Why was he even at the trial to notice the girl in the first place?

Im thinking the bracelet was an ad. Like the subway. I think there was a drink and skin care ad in the series as well.