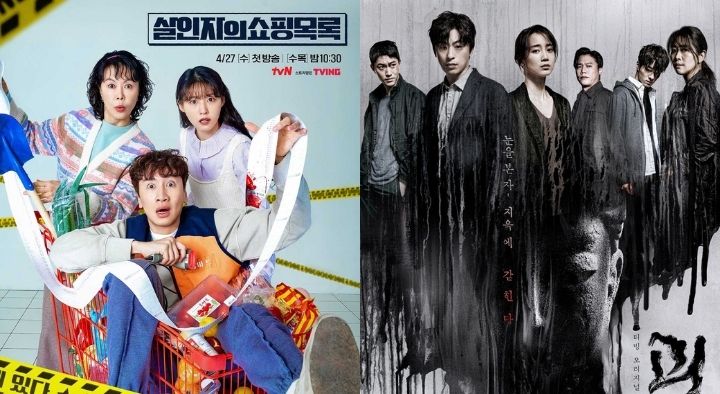 This week’s premieres take a thrilling and bloody turn, one in a comedic direction, and the other quite a bit more literal. Both shows are a genre change from all the slice-of-life and melancholy we’ve got going right now, so who’s ready? 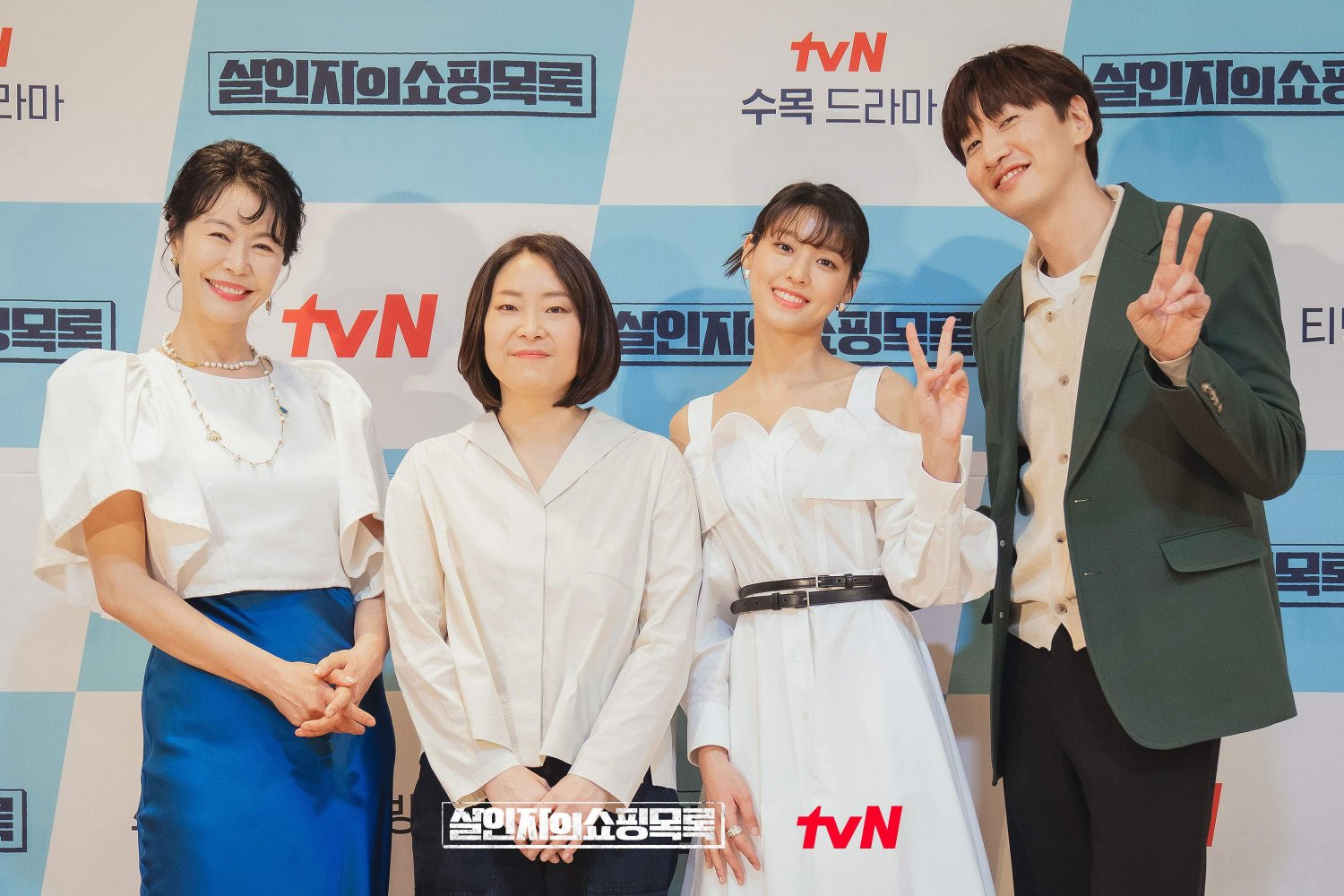 Reasons to watch: Lee Kwang-soo back in dramaland in a role that seems written for him!? That’s all the reasons to watch right there. The Killer’s Shopping List lays out a great premise: a left behind shopping receipt at a local mart is the only clue to solve a crime, and it’s the job of our underdog hero to figure it all out. Well, with the help of his mother (Jin Hee-kyung), and police officer girlfriend (Seolhyun). If the drama can keep the quirky aesthetics and humor of their promos, this could be a great little eight-episode drama. 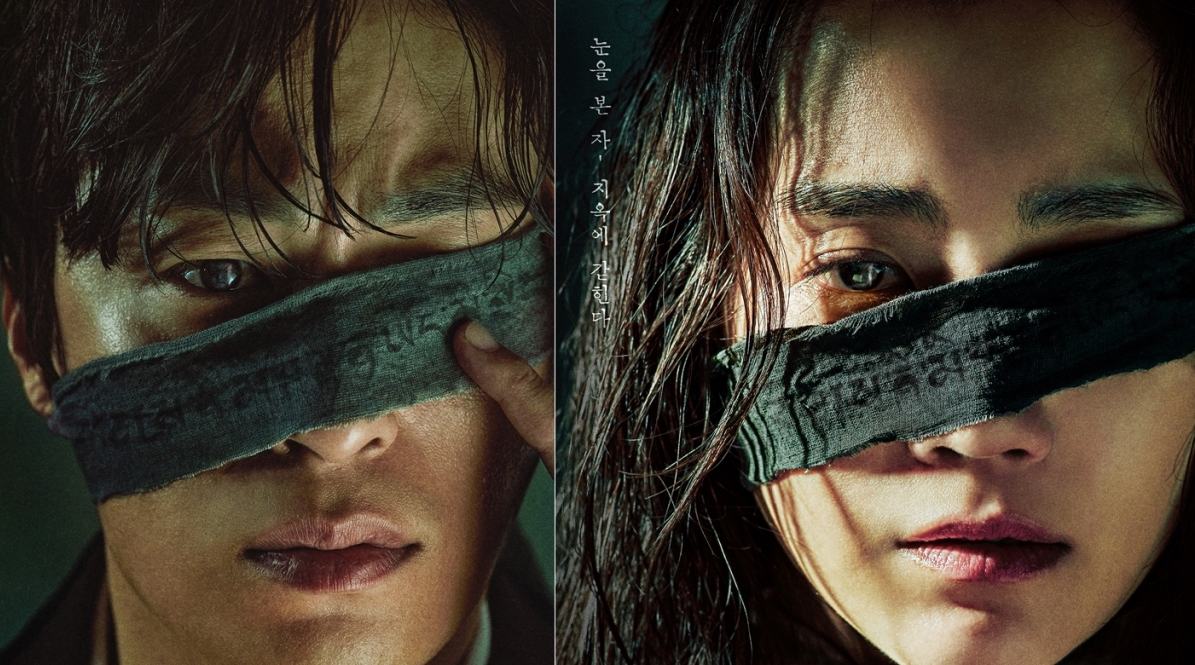 Reasons to watch: TVING has a new premiere and they continue to lean into the dark and bloody. Monstrous boasts a great cast, but a super scary premise. If you’re a fan of: Gu Kyo-hwan, Shin Hyun-bin, Kwak Dong-yeon, Nam Da-reum, etc., you will likely be excited to see them here… but are you also game for a story about creepy supernatural happenings, ancient signs and symbols, evil spirits, and more? It’s a hard pass for me, even with Go Kyo-hwan reeling me in.

Hmmmm... I start by looking up the writers and PDs and neither show seems all that promising, with perhaps a slight edge for Monstrous (??), but I really don't need need another Friday show.
I'll probably start both anyway, but...

I’m extremely psyched for Monstrous, but I feel like my body will physically stop working if I watch more dramas around the weekend time-slot.

Wait, but it’s a TVING drama so subs might be hard to come by for the first few weeks. Maybe I can have my respite. Thank god for that.

But seriously, why does TVING not have an english subs option? They really should get that moving if they wish to expand and have an international audience.

OnDemandKorea gets some of their titles (Work Later Drink Now, Dr. Park’s Clinic) but I also don’t understand why they and wavve don’t sell more of their shows to international services, especially when they have well-known casts. Seems like a waste.

I think it's the genres more than anything. It doesn't seem like the darker genres are as popular internationally as romances or comedies. The streaming services may not want to shell out for them if they know they won't get a big audience.

I did see that Viki has Political Fever (aka Going to the Blue House Like This) up in the Coming Soon section, which was the Wavve drama that was so critically acclaimed in SK. So there's hope some may be licensed at some point.

Ohhhh I didn’t realize that!! I have been moaning about no one picking up Going to the Blue House Like This since the moment it started airing because I love me some political satire. Can’t wait to watch it finally!

The broadcast and major cable networks still get nearly ever drama of theirs subbed regardless of genre, but I get that they probably have more money than the newer streaming platforms.

Going to the Blue House Like This will be subbed?!?? FINALLY.

As for the genre, that still seems to be something exclusive to TVING and wavve. Public and cable channels tend to get their shows subbed either instantly, if popular, or immediately after it ends, for the more genre fare. As @mindy states, it’s probably a money thing, but I can’t imagine these dramas not doing well. Not Business Proposal perhaps, but there would be a loyal audience.

Kwak Dong-yeon, why?!? I want to see him in new drama but the story of this one doesn't interested me, it looks very dark. I guess I will have to wait for Big Mouth, another drama where he's only a supporting role...

The Killer's Shopping List looks fun and it's a short drama. I will test this one.

I'm in the same boat as you. He's one of my absolute faves, but normally I wouldn't touch this genre. I like sleeping through the night, thanks.

But I might have to try it. Or at least flip through it and see if I can stomach the scenes he's in.

There is a scene with Kwak Dong-yeon and Nam Da-reum on the same bike! A great combo of actors!

Why are you all trying to watch all weekend dramas on weekend? What the use of streaming sites when we have to watch all dramas at the same time, it is not TV program. I know the fun of commenting on dramas together around the same time, but watching dramas should not be like a task with deadline. 😁 do we all have enough deadline IRL?

For me, I spend a lot of time here and other kdrama places, and I also follow several kdrama accounts on IG, and if something is spoiled for me it reduces my enjoyment substantially.

For me, it’s more that I’m extremely busy on weekdays and so have to fit in most of my drama-watching within the weekend. I try my best to spread it out, but sometimes it just doesn’t work out. That, and the whole don’t-want-to-be-spoiled thing (although i admit to not caring as much about that as others might).

@mindy @ladynightshade
I don't mind being spoiled, what matter is the process not the ending 😀 so I don't face the same problems as you all. Lucky for me I guess

I end up having to prioritise them, and I do, but it's still a lot to get through, especially if one IS watching shows that also air throughout the week.

What We're Watching is my deadline.

Haha, I like to watch my dramas in order of the recap releases here. XD

Of the two dramas I will be watching THE KILLER’S SHOPPING LIST which thankfully will be available on VIki US.

O/T. I would like to be able to watch TVING’s upcoming mystery ROSE MANSION with Yoon Kyun-sang however there has no word on if that will be available in the US subbed.

I was going to start Monstrous and I THINK I was going to start Shopping List as well, but I am already watching 5 weekend dramas (10 episodes a weekend) and one Thurs/Fri Drama (not to mention two other shows), AND, more importantly, I am AWAY for two whole weekends, starting tomorrow (my Friday) meaning I will have a maximum of 24 episodes, an entire shows worth of catch up to do when I get back, if I don't get to any during that holiday. Which is insane, and also incredibly daunting, so I think I'll just see where I'm at when I *do* get back and see what I feel up to lmao.
Fortunately Monstrous is only 6 episodes, so it will be an easy binge at least.

Enjoy your trip Sic. I feel for you and know what it is to have to catch up. I just had a house guest for almost a week and then took of for 3 days (mini vacation) and return home on Friday so I have a bunch of episodes of the 4 dramas I am watching and the 2 (SHOWTIME, SHOPPING) that I plan on watching then there will be JCW’’s in MAGIC coming soon.
I am bummed out that I won’t be watching Jang Hyuk (and fan) in RED HEART because of lack of US availability but I have enough to keep me occupied.

only 8 eps and 6 eps okay i'm in! everything with kwangsoo and koo kyohwan are must watch

Jin Hee kyung is playing Lee Kwang soo's mother. Ageism is alive and well and will never go away in entertainment media, will it?