KBS’s upcoming Red Heart has released a hauntingly beautiful teaser and I may as well grab the tissues now because tragedy here we come.

The sageuk stars Lee Joon (Bulgasal: Immortal Souls) as a fictional Joseon king who struggles to command full authority while he remains under the watchful eyes of the powerful minister Jang Hyuk (Tell Me What You Saw). In order to solidify his power, Lee is forced to remove the love of his life Kang Hanna (My Roommate Is a Gumiho). But, she is fighting her own war for survival and is resolute on being Lee’s queen.

The video teaser begins with Lee Joon walking through the palace gates as he thinks back on his younger self, played by Park Ji-bin (Inspector Koo). During a funeral procession, he had walked solemnly through the same palace grounds which eventually led to Lee sitting on the throne. In voiceover, we hear his plea: “Live. I beg of you to stay alive and persevere.” We then get a quick transition from Kang Hanna’s younger self – Shin Eun-soo (Do Do Sol Sol La La Sol) – to Kang in the present as she arrives in front of the palace again.

In another sequence from the past, we see the entire palace ablaze and the ensuing uprising. An imprisoned Shin Eun-soo is taken away from her family and the camera lingers on the heartbreaking aftermath of the lives lost. We also get a brief focus on a contemplative Jang Hyuk, who receives the report that the Yoo family’s daughter was selected for marriage into the royal family. Jang muses in response, “The King has given them prestige.”

Park Ji-bin tries to console a distraught Shin Eun-soo and he vows, “Nevertheless, I will survive. I will live and see the day when I take revenge on everyone who harmed the people I love. Thus, I beg of you to stay alive as well. Endure and live. You are my wife-to-be and it is because of me that you experienced this horror.” The teaser then comes to a close on a rare moment of happiness, with Lee Joon and Kang Hanna sitting under the cherry blossoms at night.

Premiering next month on May 2, KBS’s Red Heart is directed by PD Yoo Young-eun with scripts penned by Park Pil-joo (Cantabile Tomorrow). 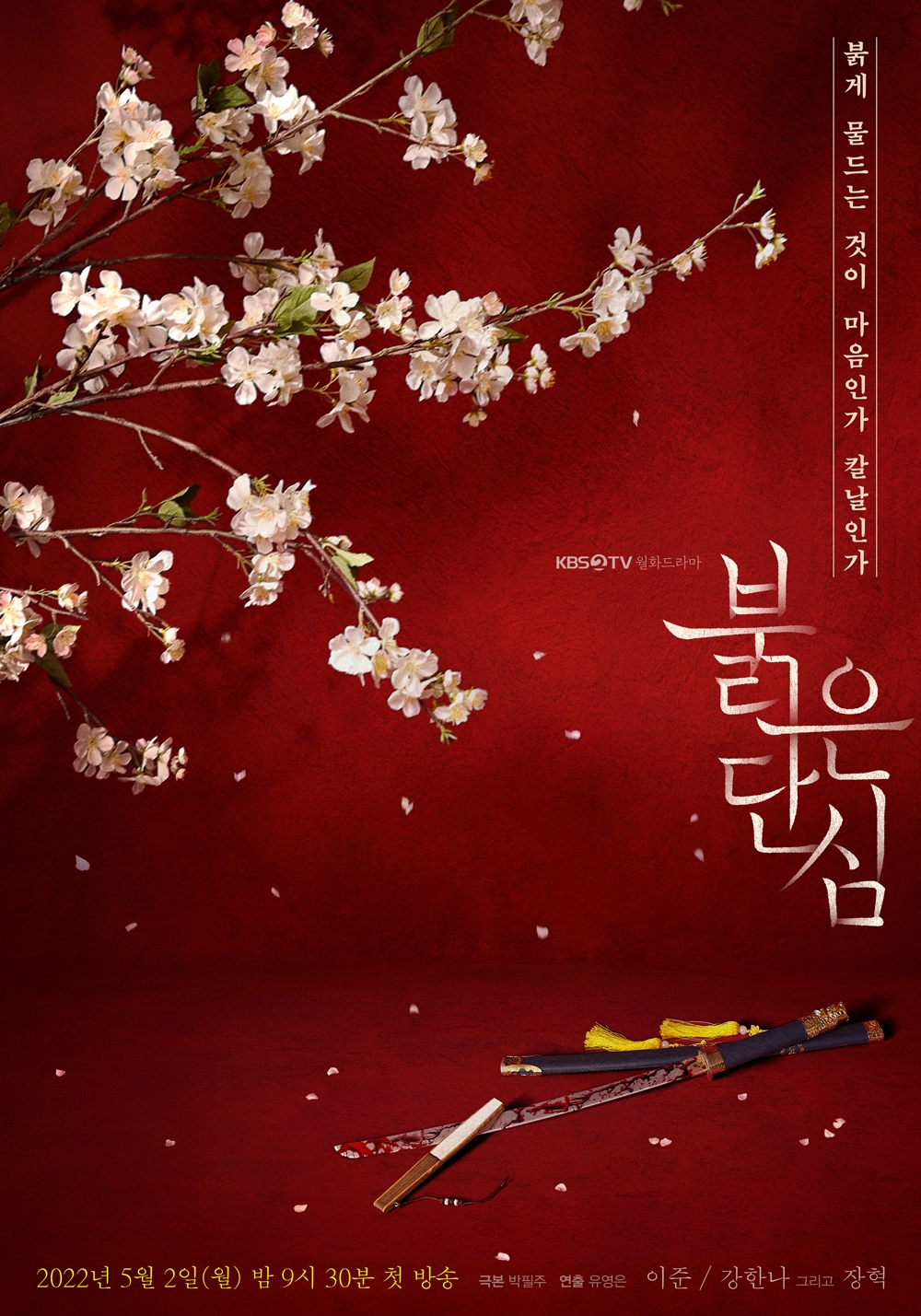 I love love this cast, but I need some joy folks. Sigh, I too shall grab tissues.

The world is so joyless, I’m with you on needing some joy. But at least with a saejuk, our hearts are prepared for some tragedy.

True, we know going in so can't blame anyone but ourselves. Lol

Scarlet Heart Ryeo, The Red Sleeve, and now the Red Heart. What passionately titled saeguks! I like all three leads in Red Heart and I’m looking forward to it. ♥️♥️♥️

I am READY for heartbreak. Well, at least I will be in preparation for this. No way I’m missing Kang Hanna as a lead and (potentially) Jang Hyuk with his fan.

I want a fan emoji.

I just realized there isn’t one. Outrageous. Justice for Jang Hyuk and suffering fans of My Country.

This looks sad (and the writer makes me wary), but im chronically deprived of [good] sageuks, and the whole cast is too good to pass up. Also, justice for park ji bin. And for all the former child actors that get passed up for bigger roles...

Oh, Yay for Park Ji Bin. It has been too long. I'm missing Park Gun-tae and Noh Young-hak.

I am ESPECIALLY salty for those two. I demand a 50+ episode sageuk epic with noh young hak as a leading role! (or a prominent role, at least...). I fear we may never see that long of a historical ever again but one can dream. I can only rewatch old sageuks so many times...

Love the cast. This is going to end tragically, and I'm ready for it.

There is pretty much no way I won't watch this, but after Red Sleeve and 25/21, my heart needs a break. So I'm going to do that foolish self-preservation thing and convince myself that somehow this will have a happy ending.

Jang Hyuk and Kang Hanna are favorites of mine- and I can definitely see Hyuk playing an excellent bad guy. Great cast and it appears that the production values are high.

I am already stocking up on tissues- will look for a sale to buy more.

Whether this KBS sageuk is entitled RED HEART or RED SINGLE HEART or BLOODY HEART hopefully I will be there. I say hopefully because so far this drama has not appeared on either Kocowa or Viki’s “Coming Soon” lists. Episode one airs in less than a month.

I hope Viki picks it up.

Jang Hyuk is back! In a sageuk!

@peridot This looks like it is going to be a great drama.