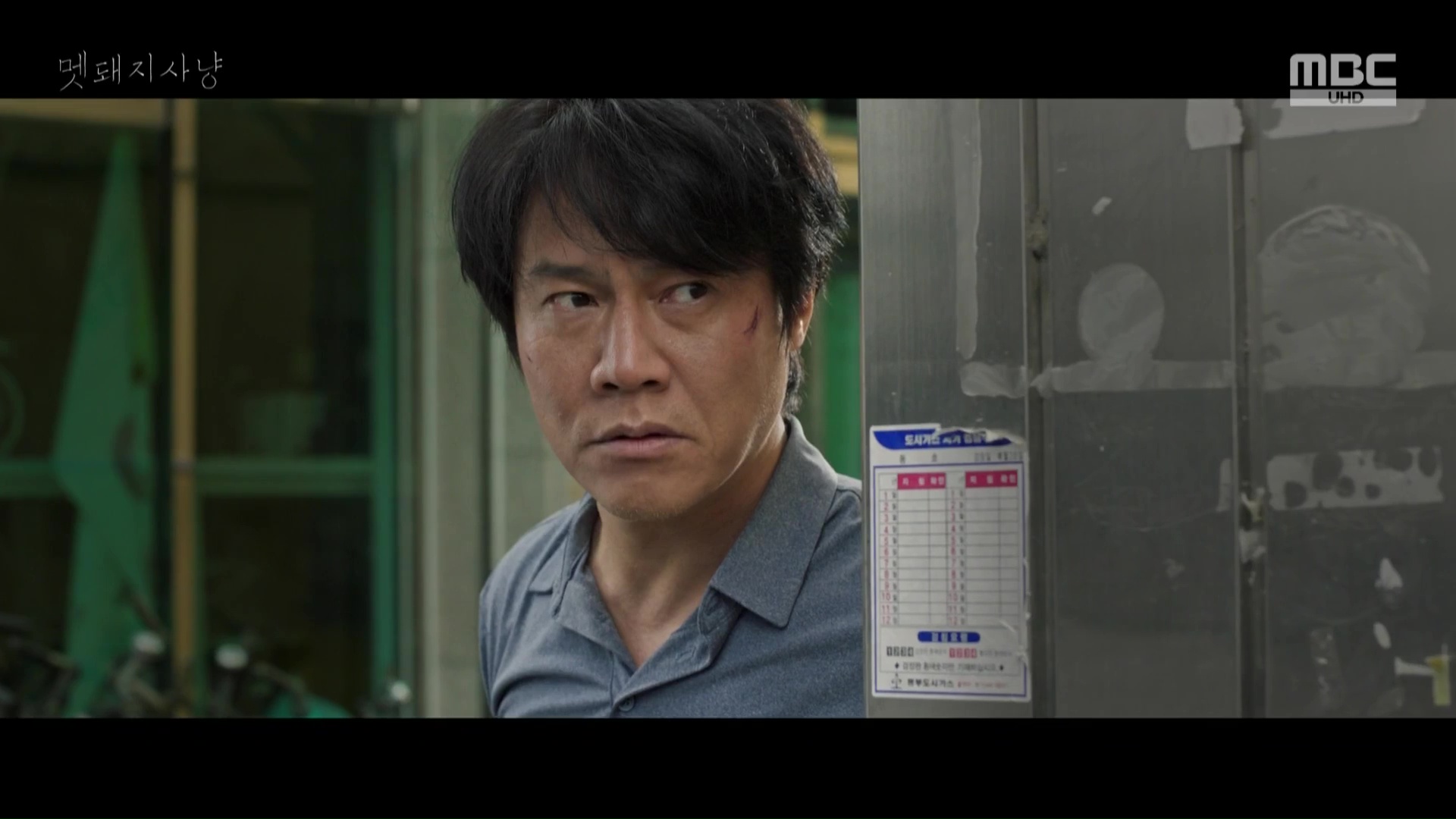 Our protagonist’s paranoia grows as it becomes clear he’s not the only one who knows what happened in the woods that day. As evidence of the incident begins to surface, he decides to take matters into his own hands rather than let himself be backed even further into a corner. 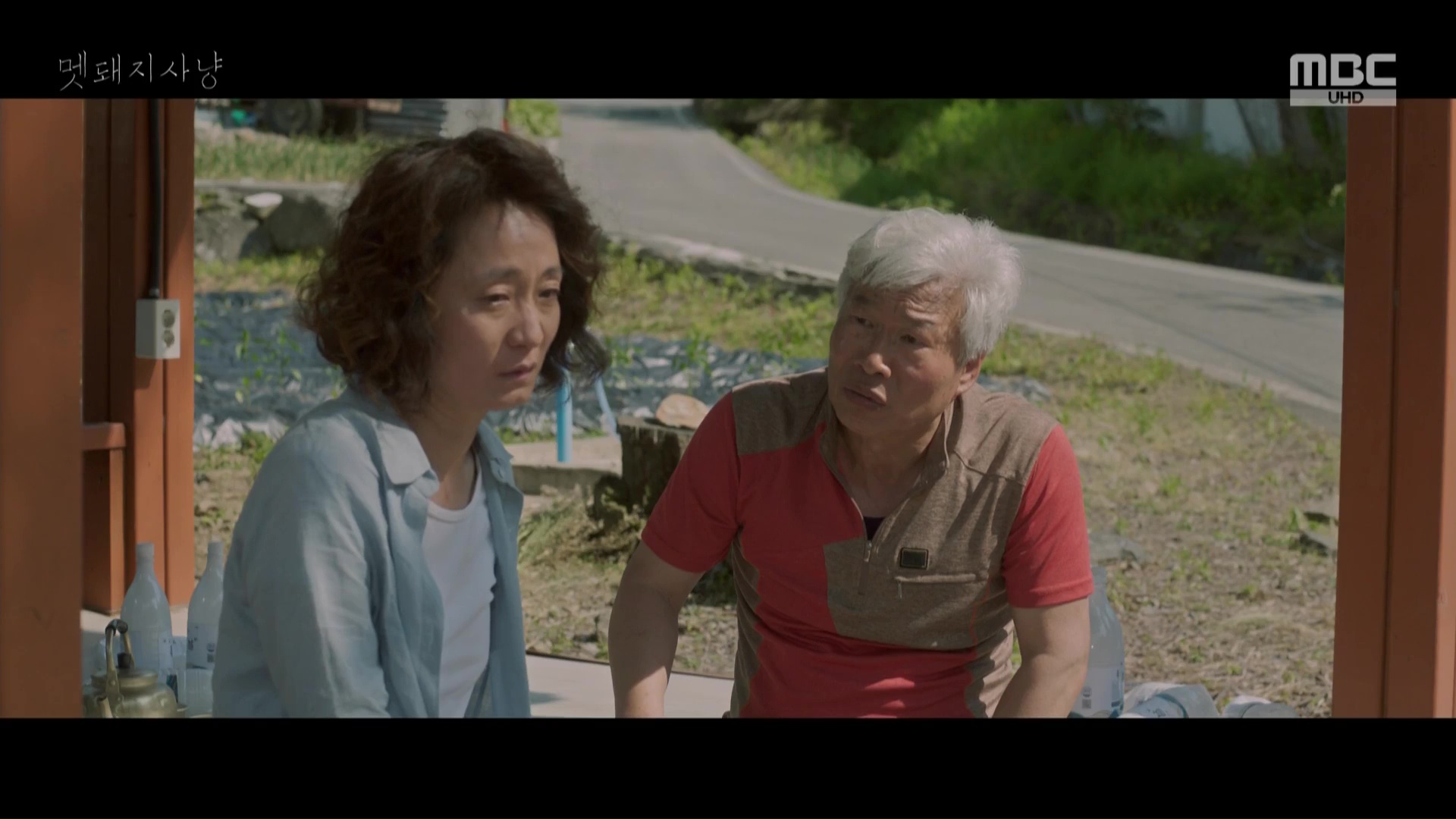 As the search for the missing boys continues, most of the villagers carry on with their everyday lives while offering what support they can to Young-soo and Chae-jung. As for Young-soo himself, he locks himself in his room. The more he agonizes over the hunting incident, the more thoroughly he convinces himself that at least some of the others know what he did. In his now-altered memory of that day, they all smirk at him like they’re just waiting for the chance to expose his secret.

So when two of his friends stop by the house to check on him, he doesn’t answer them. Alarmed by his silence, they kick in the door, only to find that he’s already jumped out the window. They end up chasing him down the road until he can’t run anymore and they all sit down to catch their breath. Now his friends are even more worried, and they urge him to stay strong for both Chae-jung and In-sung. 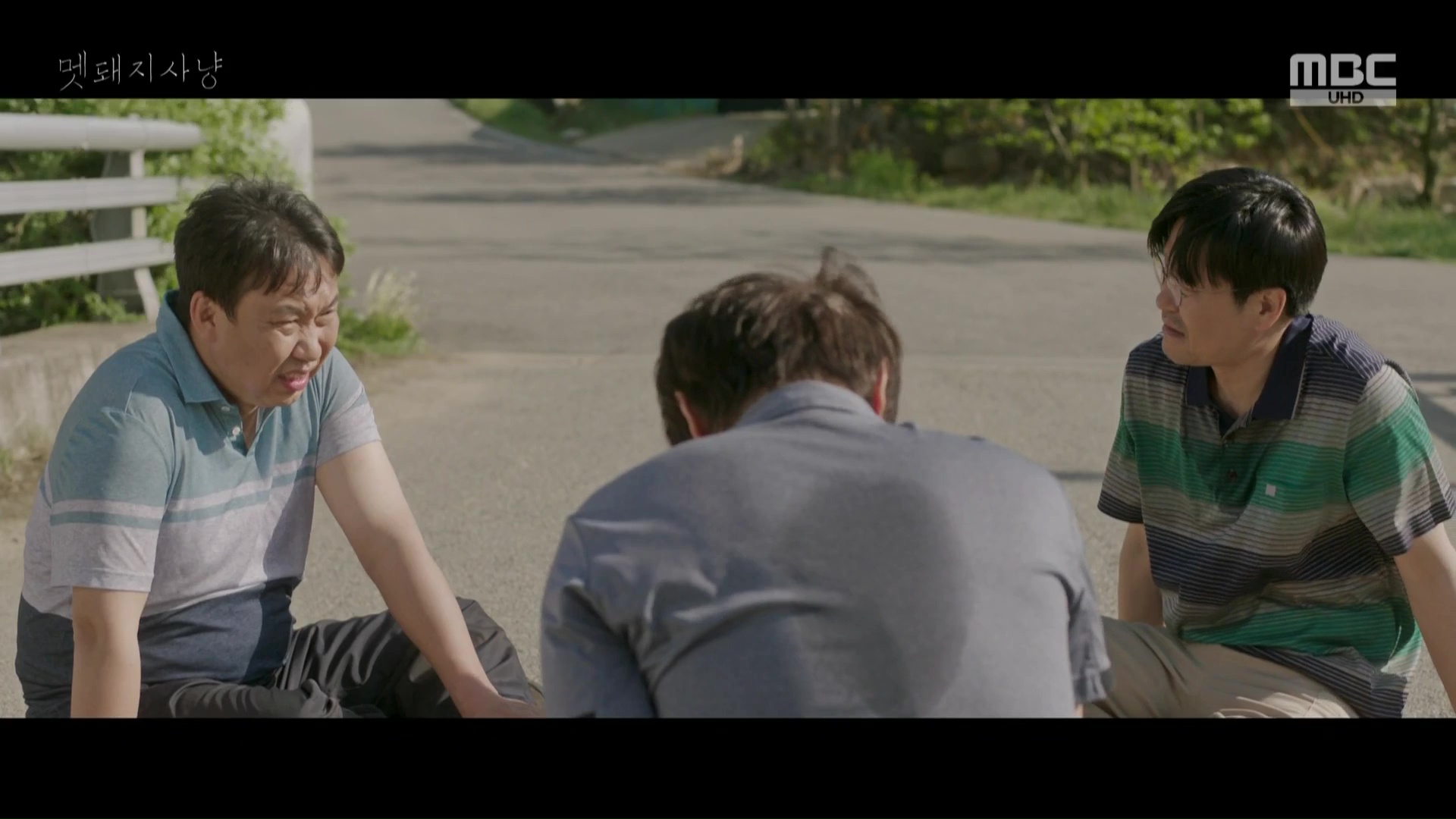 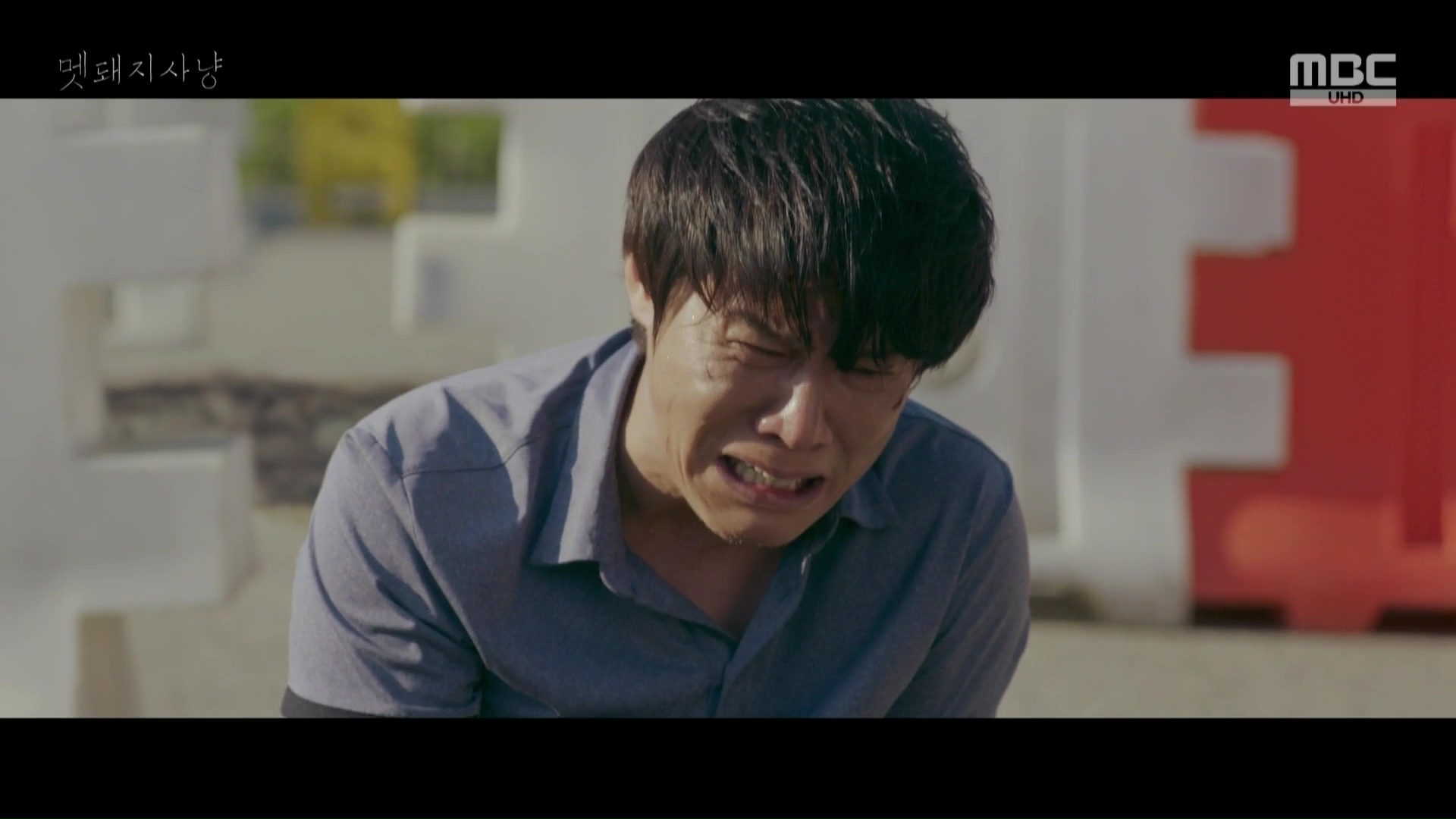 Young-soo breaks into tears at their support, but then a police car passes them on its way into the woods, lights and sirens blaring. Young-soo races after it. Just as he’d feared, the police have found something at the scene of the shooting: a bloodied wallet and Hyun-min’s student ID.

No bodies have been recovered, but these findings assure Young-soo that the person he shot must have been Hyun-min, not In-sung. And that leads him to the conclusion that the person who witnessed the shooting – the one who called him demanding a large sum of money in exchange for their silence – must also have kidnapped In-sung.

In his mind, there’s only one person it can possibly be. His friend JOO-HYUB (Cha Shi-won) was the first to arrive on the scene after Young-soo fired into the bushes. In fact, he arrived so quickly that it’s entirely possible he saw the whole thing. 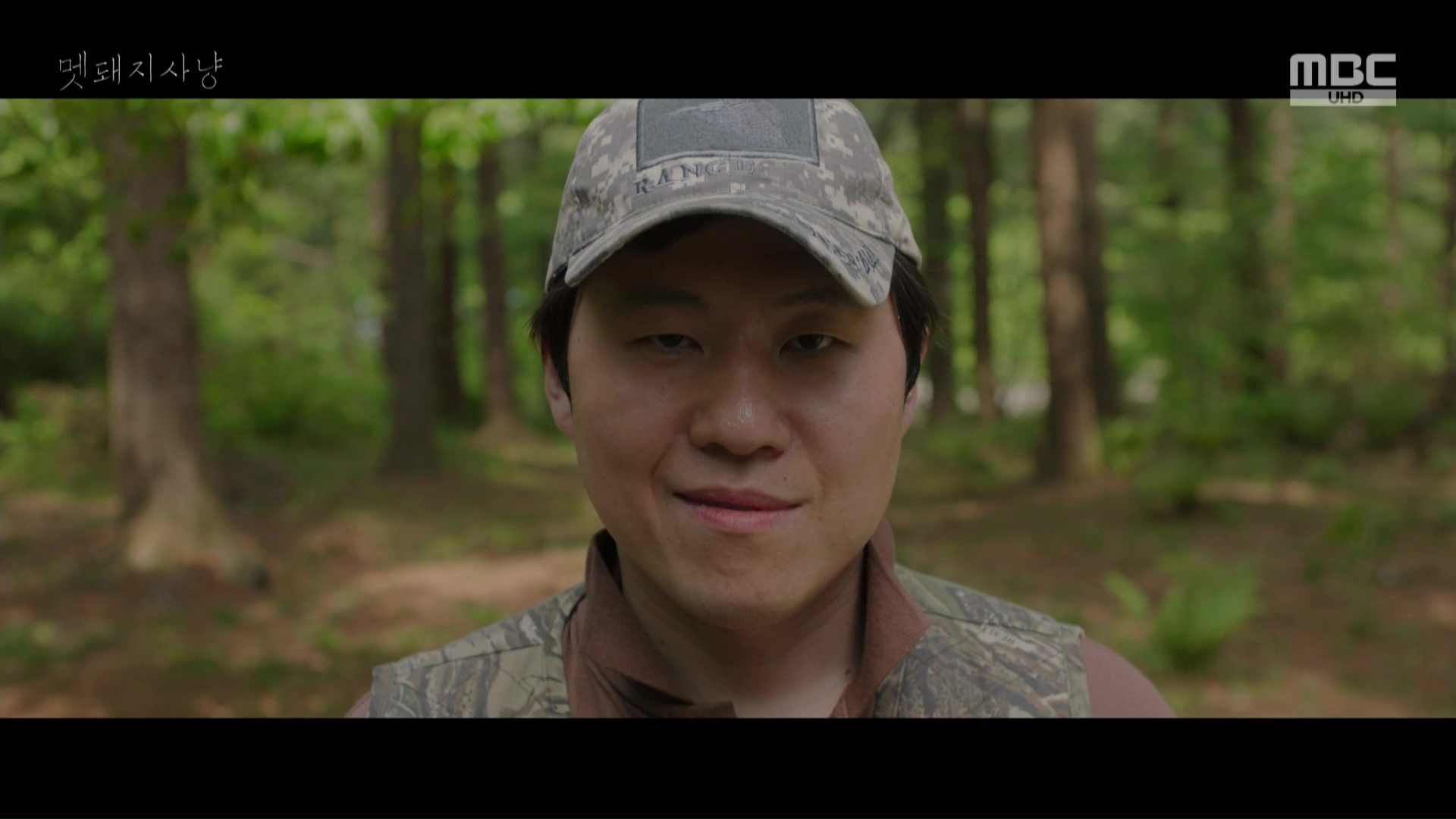 Young-soo tails Joo-hyub around the village, hoping for some clue as to where he’s keeping In-sung. His suspicions don’t seem wholly unfounded, either, as Joo-hyub goes around buying weapons and also has a locked storage room at his house with blood pooling out from under the door.

While Young-soo tries to find a way to investigate that door, the detective in charge of the missing persons case presses on with his investigation despite pushback from his superiors. His instincts tell him there’s more to this case than appears on the surface, and a visit to the boys’ school adds a bit more perspective. 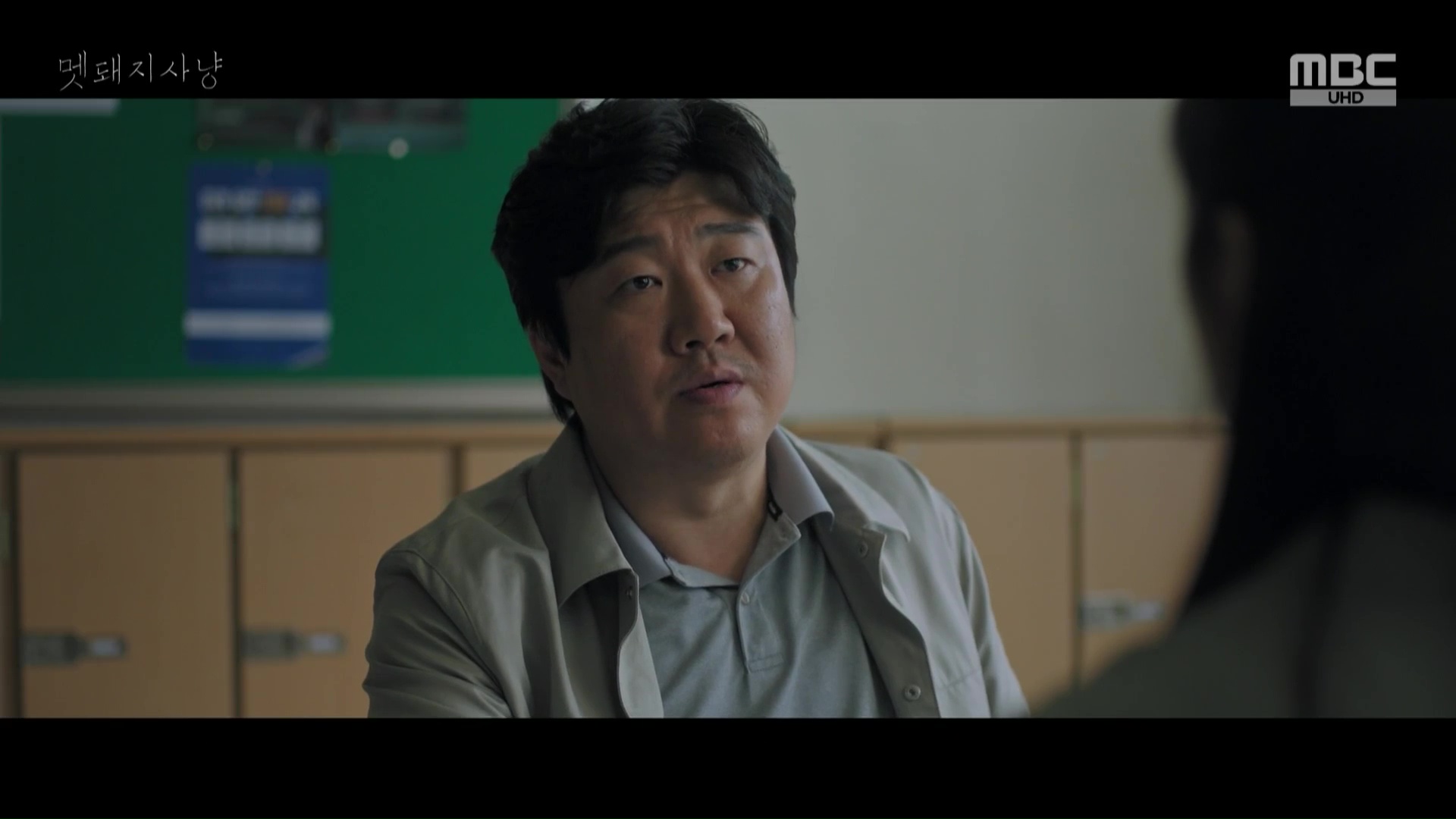 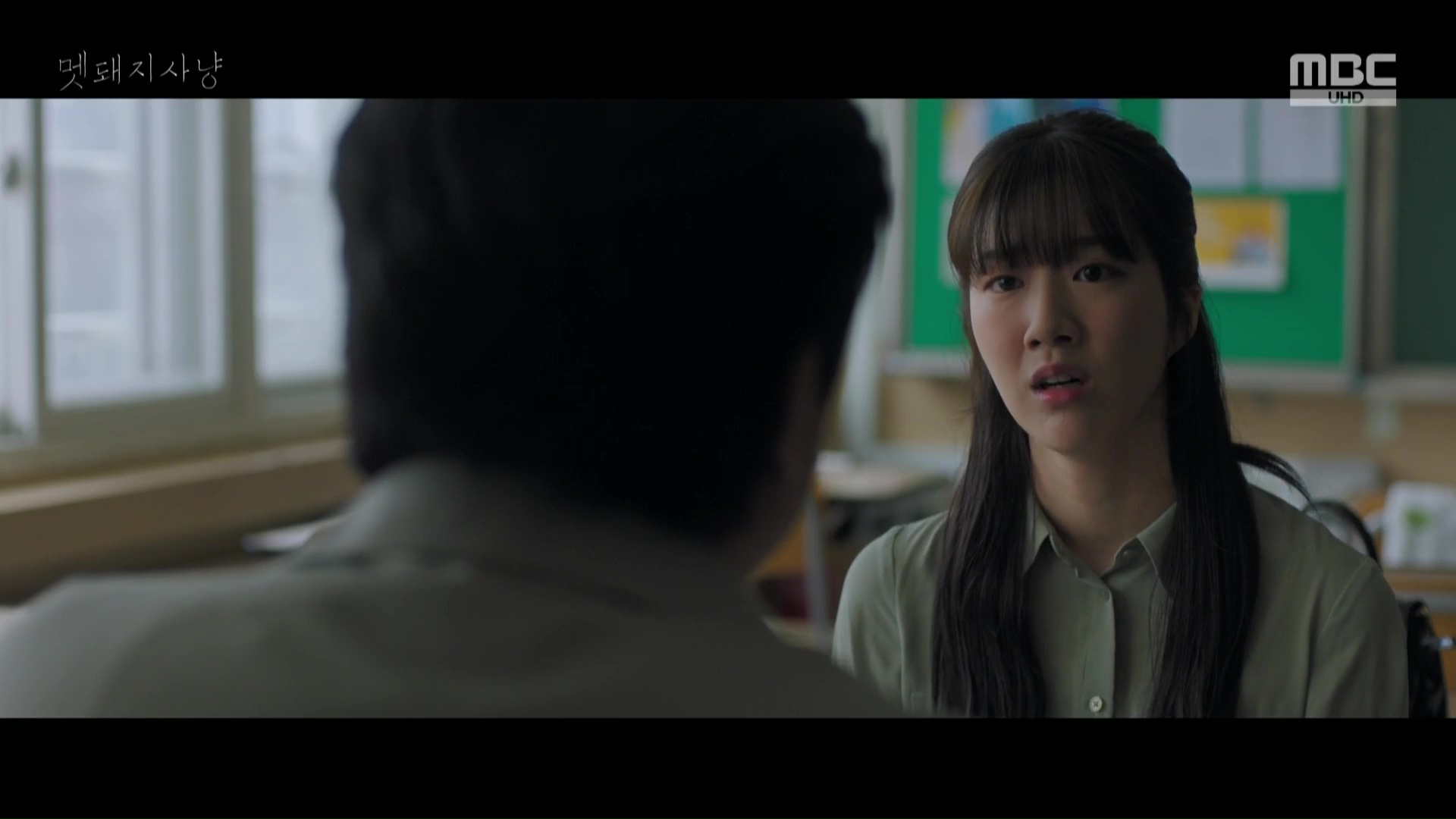 Reluctantly, the boys’ teacher shows him Min-hyun’s notebook, which is filled with death threats against In-sung. Even more reluctantly, she confesses she saw Min-hyun beating In-sung up not too long ago, defending her choice not to intervene with the excuse that none of the other teachers did anything either.

Next, the detective visits Ok-soon to get more information on Min-hyun. He doesn’t get much, but he does learn that Ok-soon’s son (Min-hyun’s father) died in a house fire, and she’s convinced the other villagers purposely caused it. That explains why she attacked him when he showed up at her front gate, but it doesn’t necessarily explain why she was digging in the woods near the crime scene the other day. 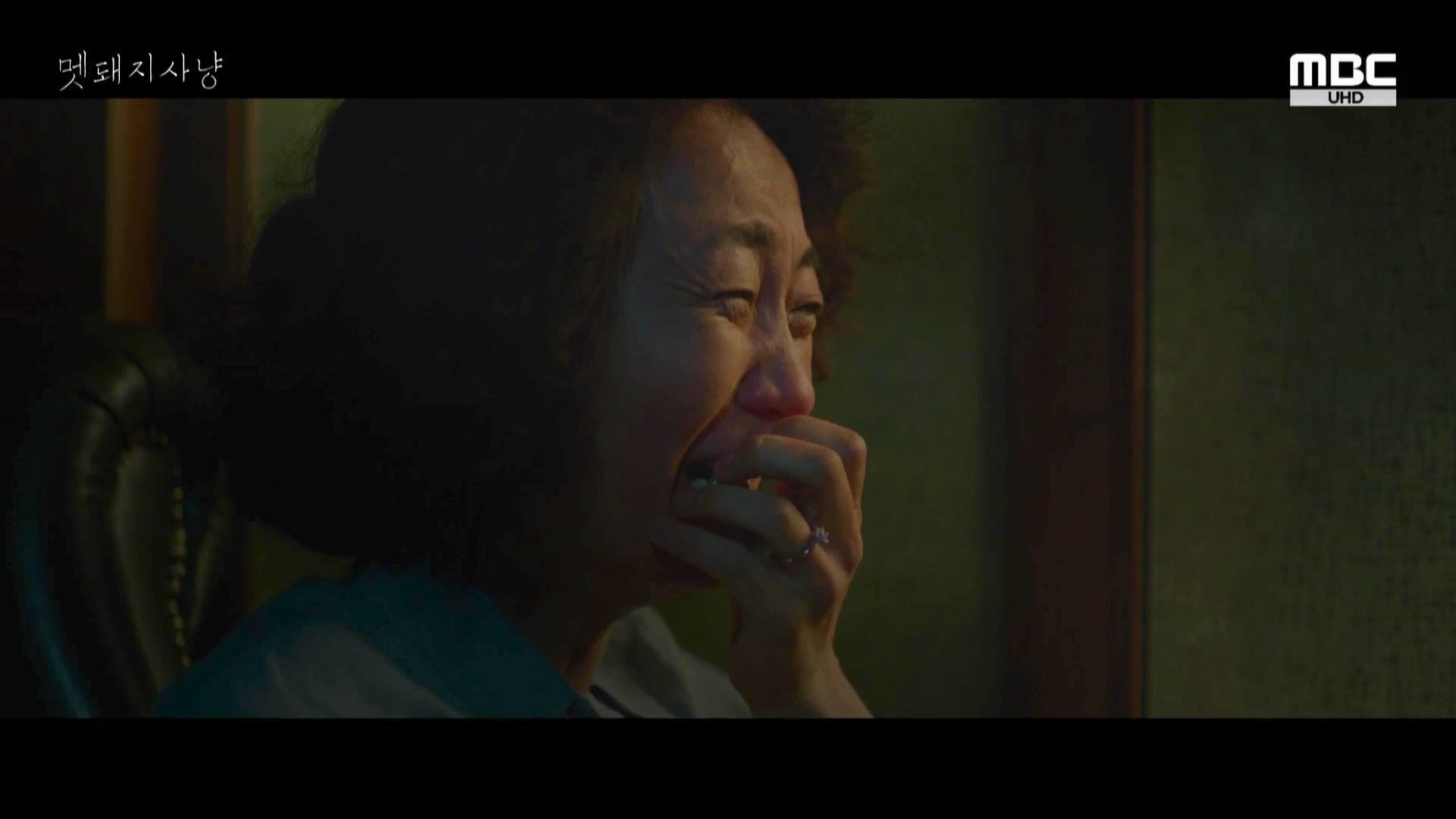 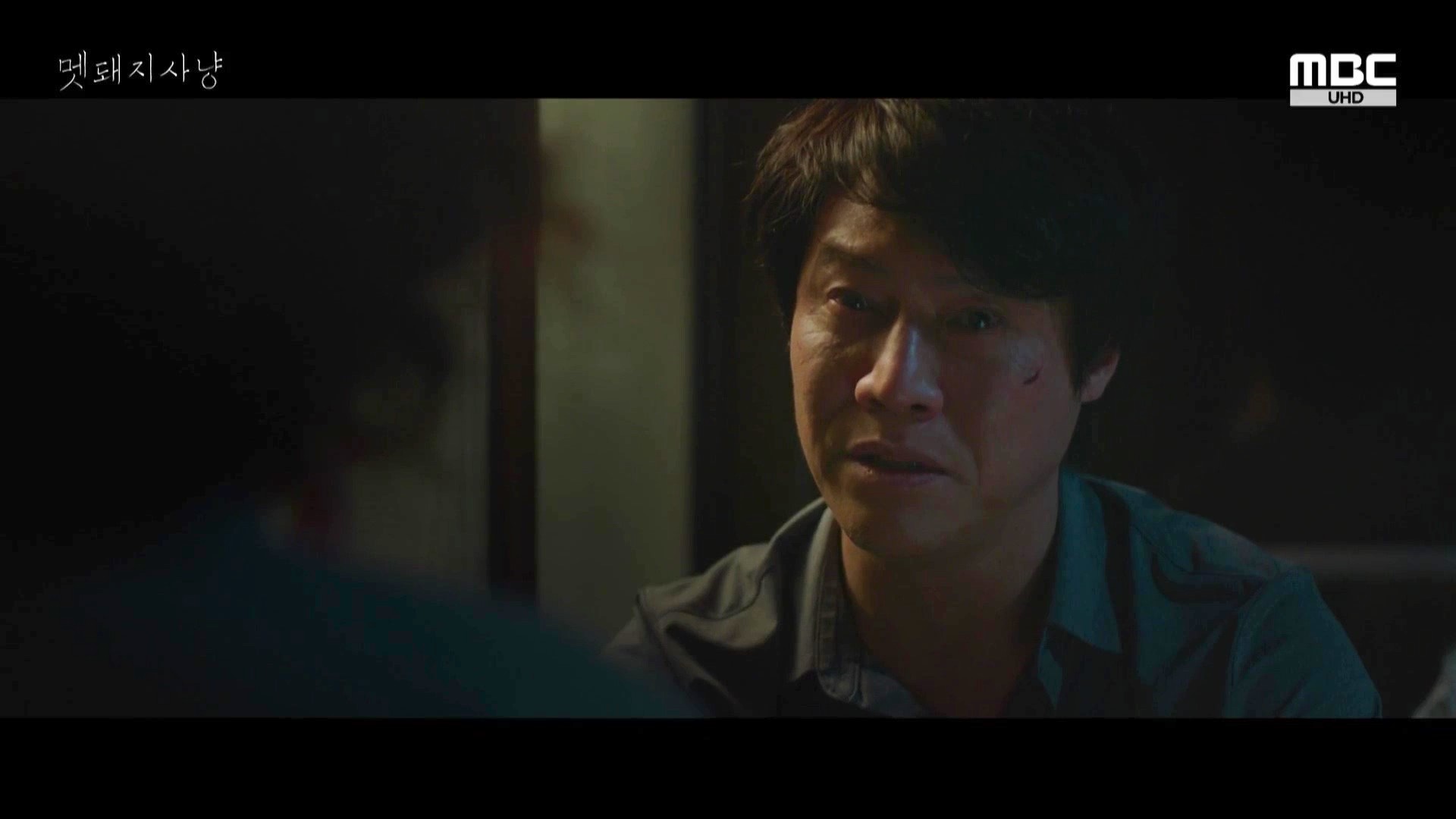 That same night, Young-soo prepares to act. Much as he did in his dream, he sits down with Chae-jung and confesses that he killed Min-hyun while hunting. But this time, he has a plan: he’s certain he knows who has their son, and he’s going to get In-sung back by any means necessary. He begs her to be understanding of whatever those means might entail. Oh no.

He returns to Joo-hyub’s house and searches through Joo-hyub’s keys until he finds the one that opens the storage room. But the room is empty except for rows upon rows of hunting traps and other weapons, and a layer of bloodied newspapers on the floor. 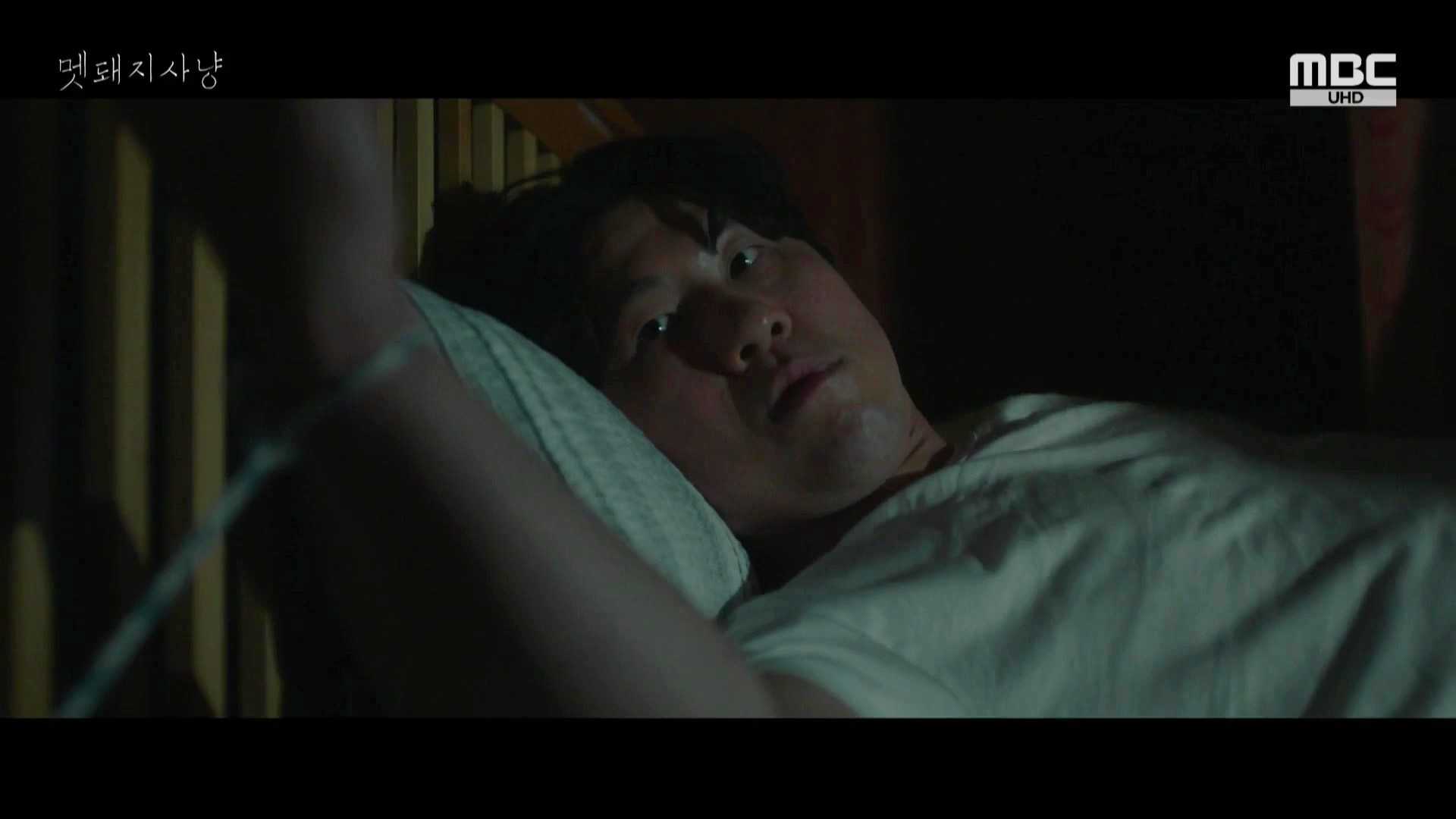 That’s when Young-soo snaps. Creeping into Joo-hyub’s bedroom, he ties him to the bed and then wakes him up to demand answers. When Joo-hyub insists he has no idea what Young-soo is talking about – aside from the shooting incident, which he did see, but swears he didn’t think was anything more than a misfire – Young-soo climbs on top and starts to strangle him.

Joo-hyub tries to appeal to his old friend, begging Young-soo not to let his life fall apart like this. But Young-soo’s mind is made up. Tearfully, he confirms Joo-hyub hasn’t told anyone what he saw. Then he apologizes in advance, pulls out one of Joo-hyub’s own knives, and kills him. After burying the body, he returns home to cry with Chae-jung, and the camera pans out to show us Ok-soon sitting just outside their door.

For all that Young-soo has done now, he’s solved nothing and only multiplied his problems. He’s hiding two murders, one premeditated; In-sung is still missing; and that wild boar is still ravaging the fields. 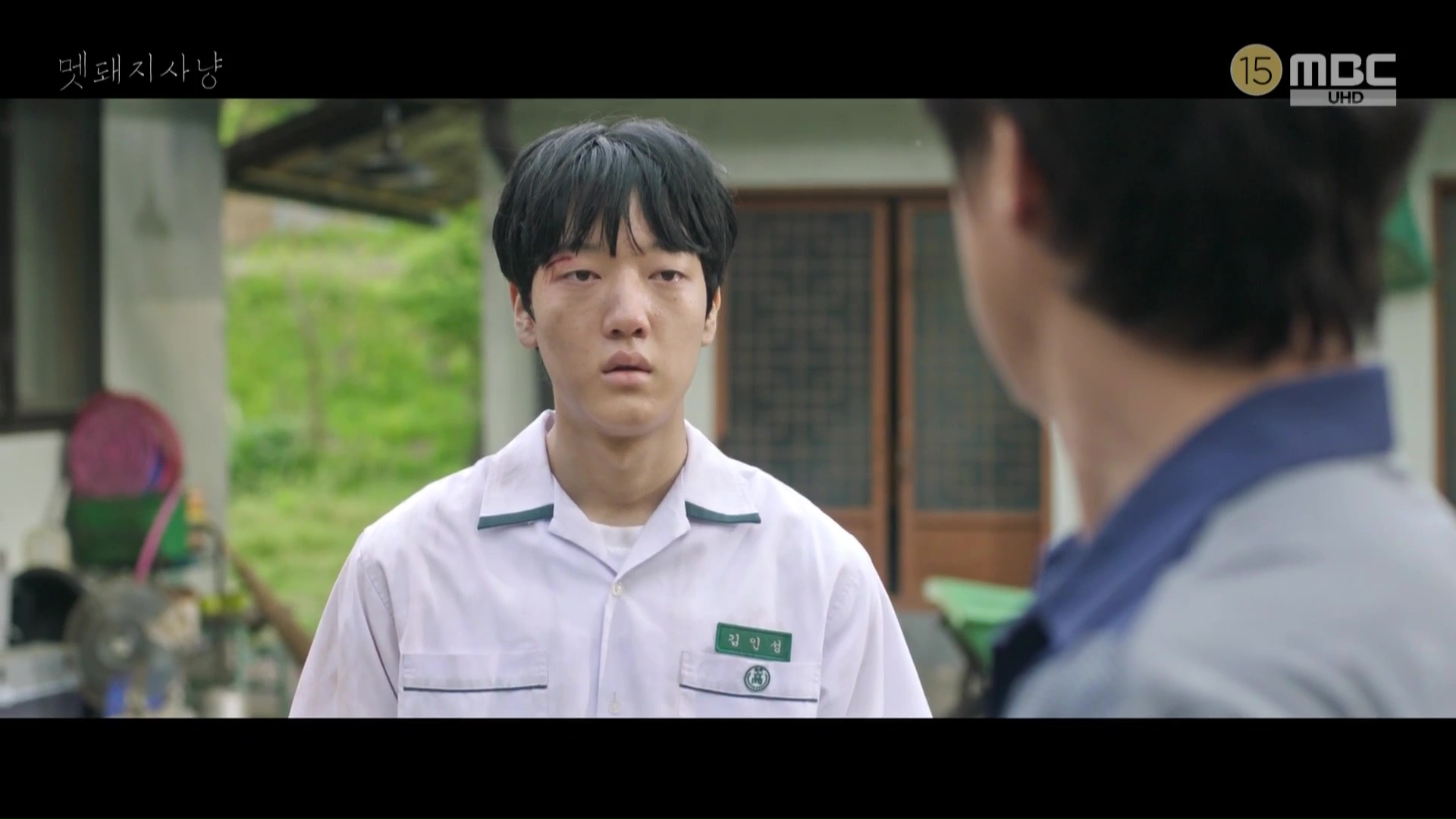 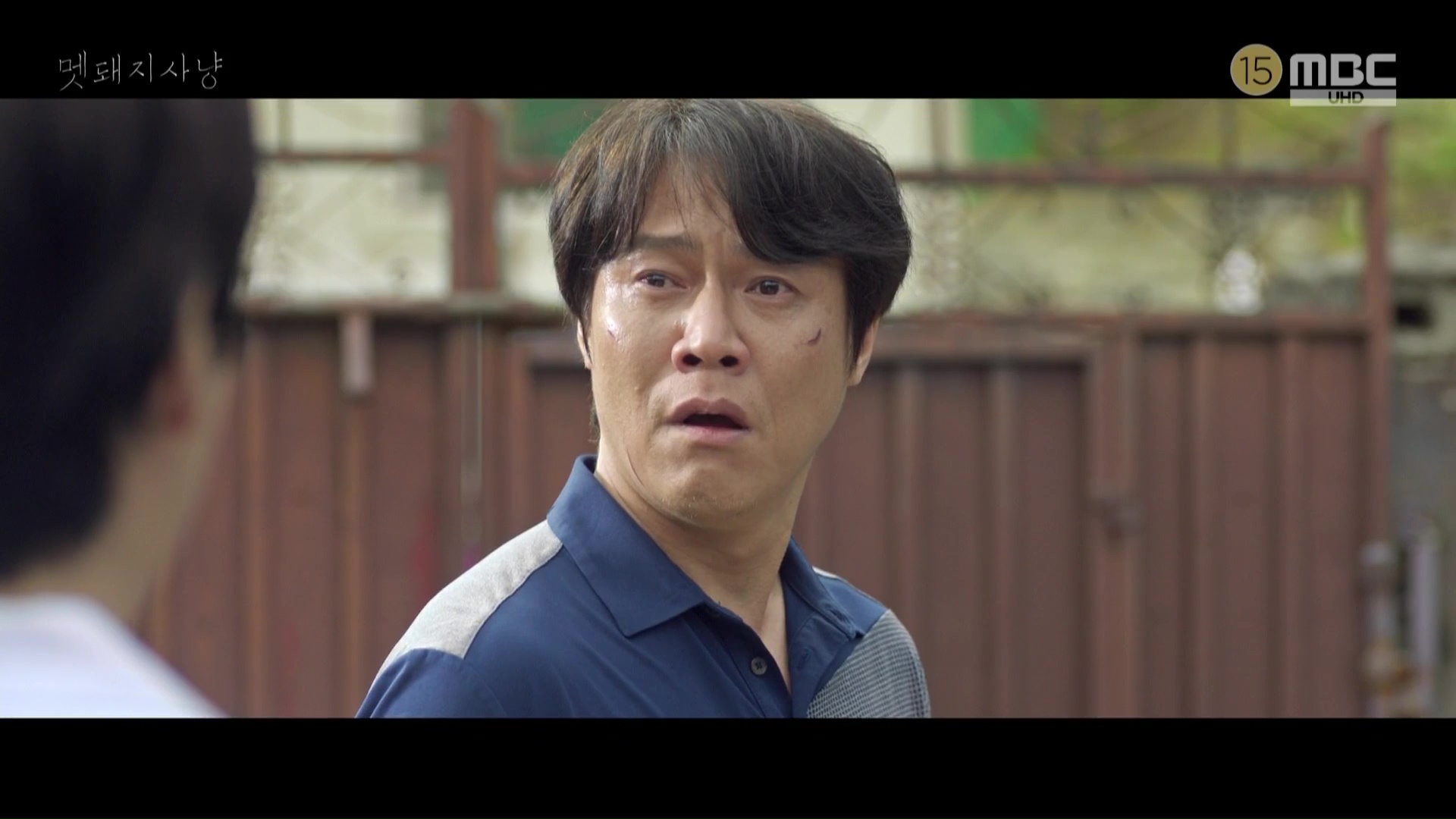 But then it gets worse. The person threatening him calls again, but before Young-soo can answer, he hears footsteps behind him. It’s In-sung, bruised and exhausted but very much alive and not being held captive. By Joo-hyub or anyone else.

Everything about this situation is just so tragic. Since In-sung is alive and safe, it’s possible that Young-soo could have turned back from the terrible, dark path he’s taking if only he hadn’t killed Joo-hyub. But that’s the thing – he had so many opportunities to turn things around. If he hadn’t killed Joo-hyub, if he had turned himself in for the accidental killing, if he had checked the bushes immediately after the incident to try and help whomever he’d shot, if he hadn’t shot at an unseen target in the first place, if he’d listened instead brushing off In-sung’s desire to move away from the village. 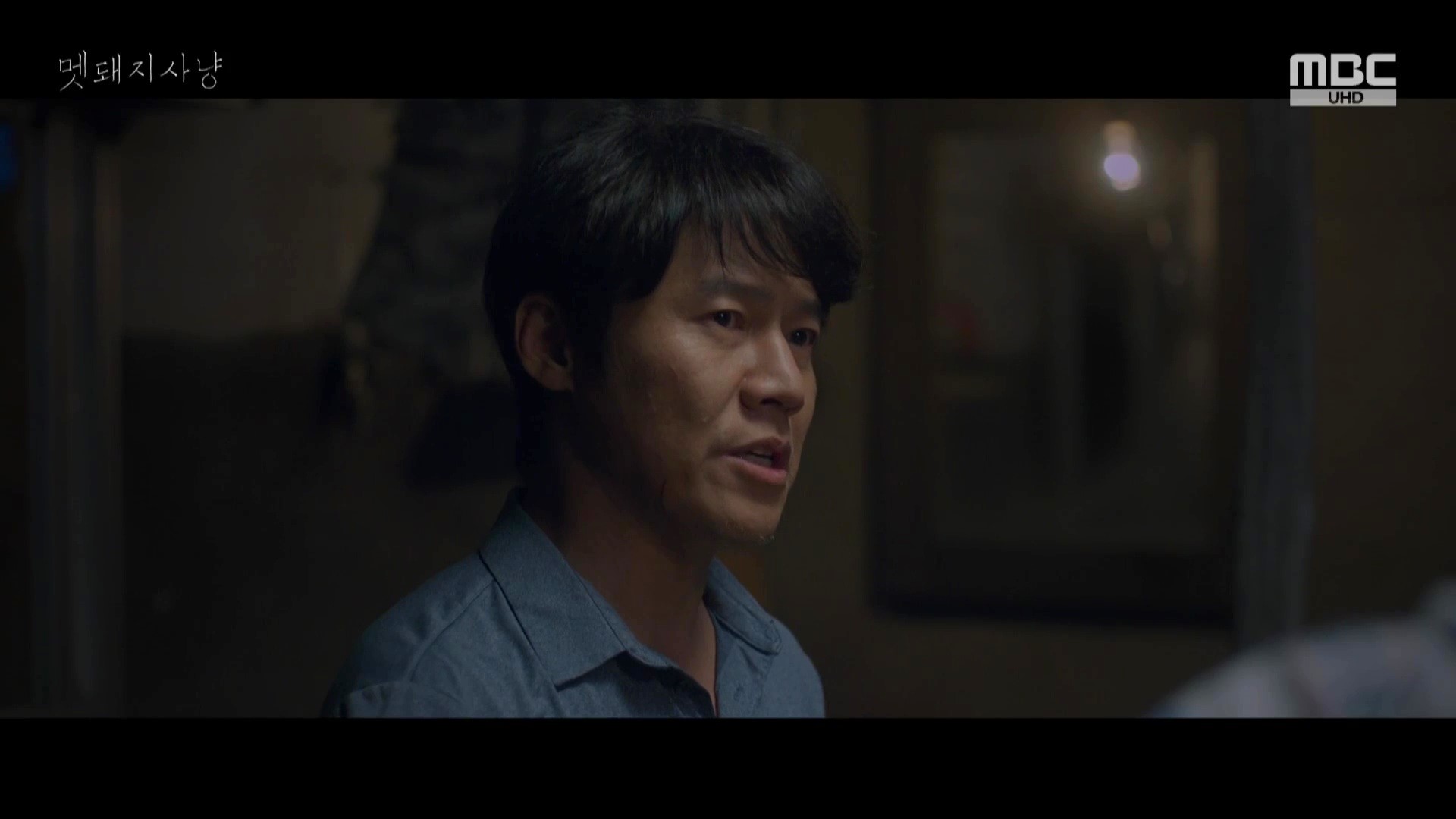 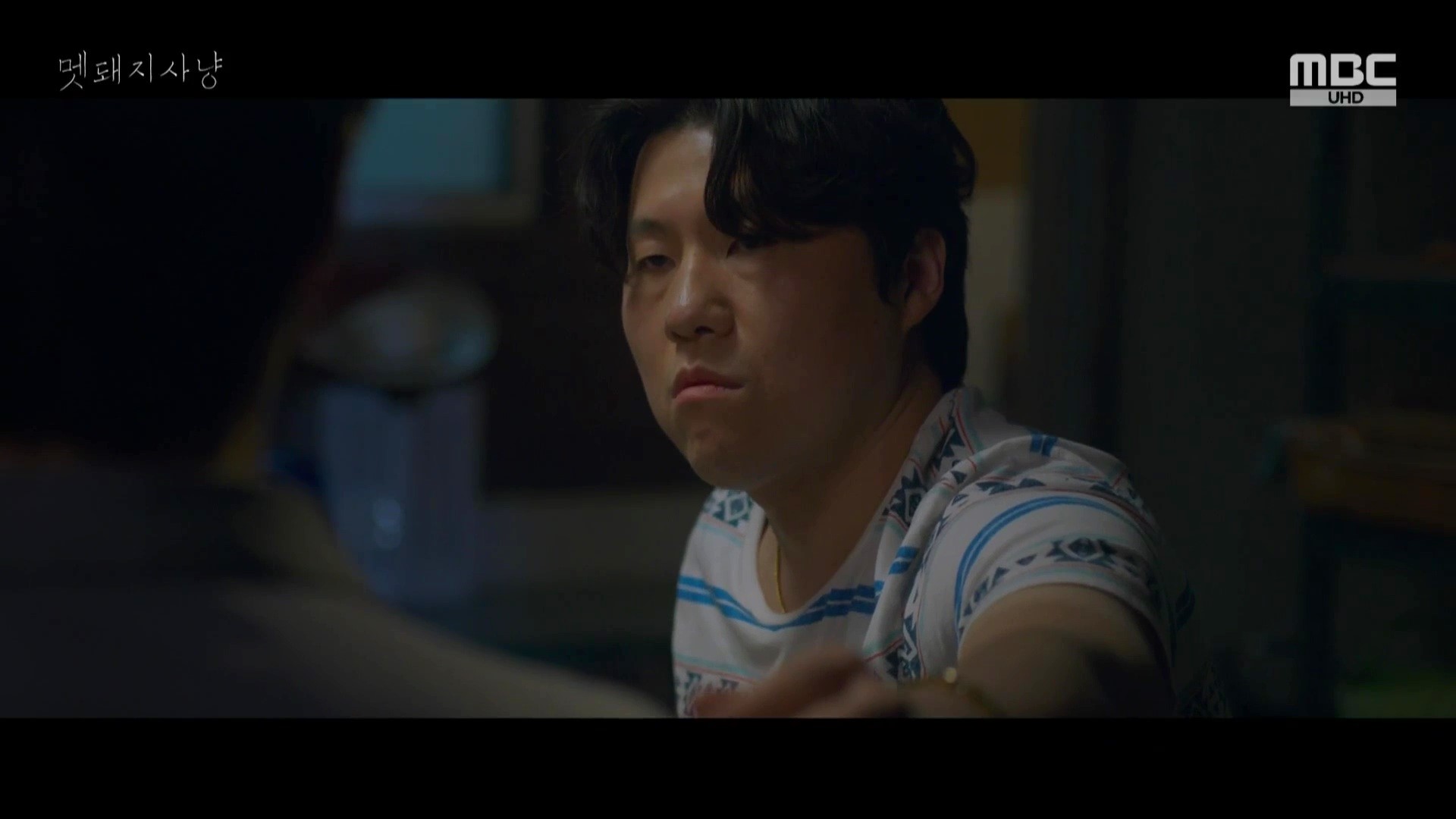 Instead, every choice he makes leads him further down a road he won’t be able to come back from. And that’s why I find his downfall after winning the lottery equally fascinating and saddening. Ordinarily, when someone’s life takes a tragic turn directly after they win a huge amount of money, you’d expect that tragedy to be caused by greed, either their own or someone else’s.

But even if the mysterious caller took advantage of the opportunity to blackmail Young-soo out of desire for his new fortune, the fault for the shooting (and everything he’s done since) is still Young-soo’s. And it’s not because of the money at all. Instead, it’s all because he couldn’t own up to his mistakes and then jumped to the worst conclusions – and acted on those conclusions before verifying anything. He’s digging his own grave. Perhaps literally. 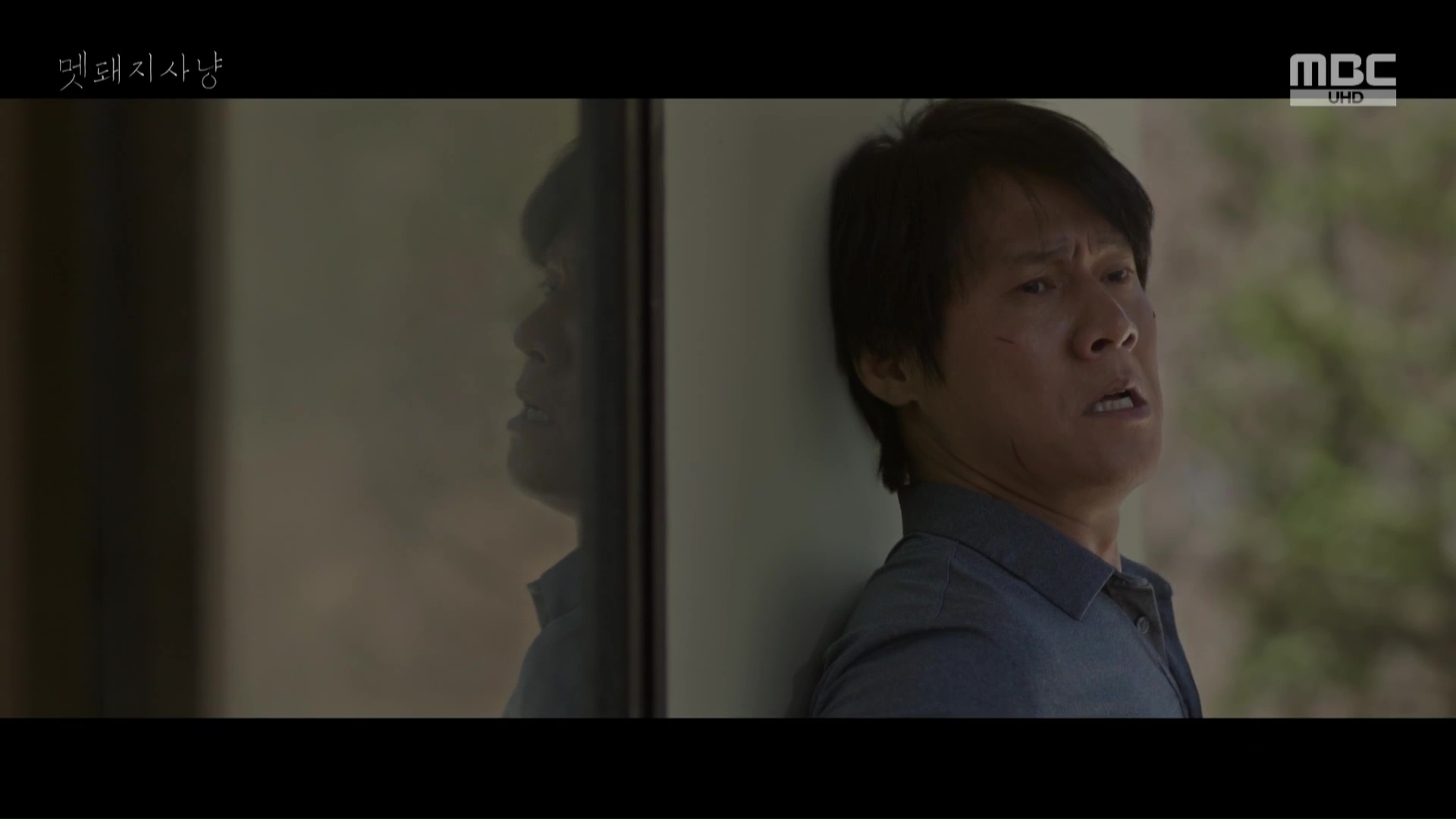 What a great recap @mistyisles! Captures the essence of the show so well, especially how Young-soo's slow descent is an outcome of his own choices.

I am only following the recaps right now but this has definitely made me put the show on my 'to-watch-when-I'm-in-the-right-mood' list.

This feels very much like a Greek tragedy! The drama is very well crafted, the tension at times almost unbearable.

The key to the mystery will be the two boys. It would not surprise me, if their relationship is a love-hate relationship, that they are really a couple and are also behind the blackmail.

The policeman has the right instinct, the teacher is in the wrong profession. Ignoring what she perceives as violent bullying is not just a small failure on her part.

I still have a lot on my plate now, but this show is definitely on my to-watch, thanks so much for the thrilling recap, @mistyisles!

Awesome recap, thank you n agreed with your view @mistyisles. Really shock by yoong killing his friend, i wonder, if the grandma suspicion of him killing her son is true, base on how he assume things instead of verifying them. The grandma heard his confession to his wife that he might have accidently killed her grandson, yet she remains calm? How come? Unless she knew her grandson is ok. The unknown caller, could it be the grandson? Ah...waiting patiently for next episode, a good monday drama.

In the preview, the unidentified caller sounded like the Granma's voice. The actor playing grama was so sweet in " Link : Eat, Love, Kill" drama, but here, she is super creepy. I really do not know which path the drama will be taking after the unexpected murder which makes it all the more suspenseful. I slightly doubt his friend Jin Kuk, but it would be cliche if he played the bad guy again.