tvN’s crime-mystery Little Women has released another round of promos featuring our troubled three heroines: Kim Go-eun’s (Yumi’s Cells 2), Nam Ji-hyun (The Witch’s Diner), and Park Ji-hoo (All of Us Are Dead).

The three play close-knit sisters, Oh In-joo (the oldest), Oh In-kyung (the middle), and Oh In-hye (the youngest) respectively, who remain anchored by their love for one another, despite their family’s financial struggles. But when hit by an unexpected situation that pits their family against a large conglomerate, the sisters are forced to confront themselves on what money is really worth.

The newly released video teaser opens on oldest sister In-joo, witnessing an accident from up above on the balcony. In voiceover, she admits, “There is only one way for you to live differently: to no longer be poor. I wanted Dad to bring home money, even if he stole it, so that we could eat, live, and not die.”

In the ongoing sequence, we see the younger sisters, In-kyung and In-hye, walking away from the press and crowds behind them – as well as a quick glimpse of Wie Ha-joon (Bad and Crazy). The intermittent text screens question us, the viewers: “How far would you go in order to escape poverty?”

We then jump to In-joo finding a bag of money in her locker and meeting with art gallery director Eom Ji-won (Birthcare Center) afterwards. A scared In-kyung whispers, “That’s a crime.” But politician Eom Ki-joon (Penthouse 3) simply asks, “Can you do it?” Although shaken, In-joo makes her choice: “Give me one test try.”

In the final sequence, we get a peek at the impending danger for our three sisters and the depth of In-joo’s involvement. Kim Mi-sook (Artificial City) predicts in voiceover that she senses something big happening soon. The teaser then closes on In-kyung’s shock, finding In-joo covered in blood.

With writing by Jung Seo-kyung (Mother) and PD Kim Hee-won (Vincenzo) as the talent behind the camera, tvN’s Little Women premieres in just a few weeks on September 3. 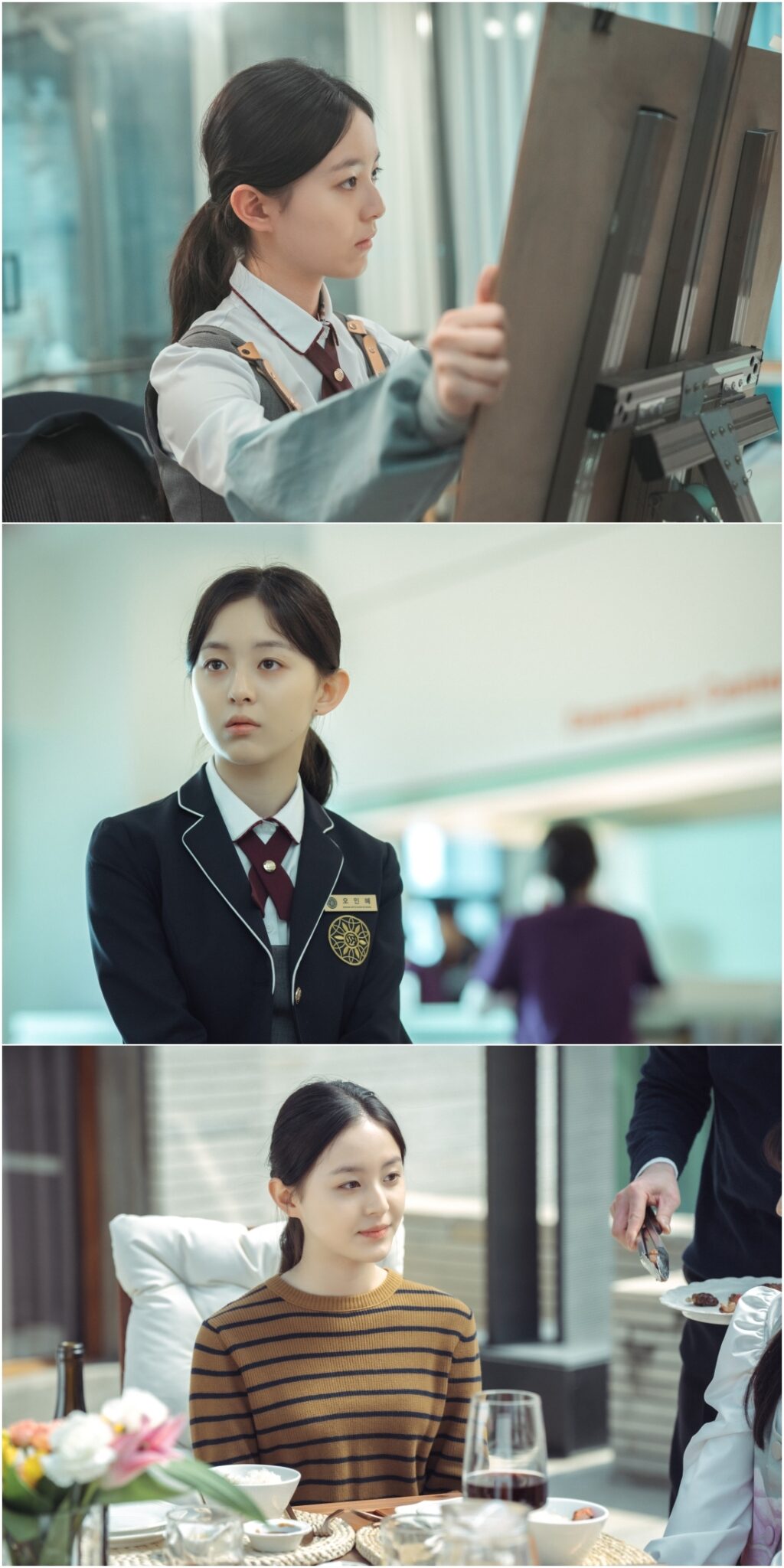 Wow! This is going to really show how the love of money is the root of all evil. I guess we will find out how far people will go from their true selves in order to live the perceived lifestyles of the rich and famous and how far those who live that lifestyle will go to keep it.

It looks like this will be a character driven drama with family relationships shaping the storyline just as they did in the original novel but other than that it will tell a very different, much darker, story.

(1) Most striking bloody hand.
(2) Most dramatic bloody face.
(3) Most horrific killing in a romantic comedy.
(4) Most astonishing stunt as a zombie.
(5) Worst case of female lead getting lost in the crowd in the second half of the series.

(1) Kim Go-Eun in a show called 'Little Women' is pretty startling.
(2) Still hard to top Kim Da Hi in 'The Witch' with that big, bloody, toothy psychotic grin.
(3) Vincenzo burning a woman alive just before a quiet farewell to his girlfriend.
(4) Hard to beat that nurse running full speed and slamming her face against a wall in 'We Are All Dead'.
(5) Toss-up among 'The Bride of Haebak', 'The Great and Lonely God', and 'A Korean Odyssey'.

I love this concept and hope that we get some nominations from those that can watch these genres that terrify me.

I have heard so many positives about Vincenzo but the actor who played him says he is the character he hated the most and from what I have read especially the nomination cited here it sounds horrendously violent.

I like that you included number three because that’s a category that shouldn’t exist and is the bane of my life when thankfully milder versions of this kind of genre mix have turned up when I was watching.

One of the things I liked about Vincenzo (the character) is that I was never sure how to feel about him. He has these incredibly heartbreaking moments, wildly funny moments, and terrifyingly chilling moments. I totally understand folks (including Song Joongki) not liking him at all, but that's one of the things I found really fascinating. But that's the word I would use. I'm not sure he's likable, but he is certainly fascinating.

That being said, I don't classify Vincenzo as a rom-com, so I wouldn't nominate that scene for that award!

Huh? I've heard SJK say Vincenzo is the favorite character he's ever played and he considers it the role of a lifetime. Not sure where you heard he "hated" him.

I can’t find any trace of it now but I am sure it was a video interview. I have found an interview which mentions what you referred to so who knows, maybe it’s something I have remembered out of context.

I get that. I like a good mix! It's hard for me to watch a show if I don't like any of the characters, but it's also nice to have some with lots of different facets. I don't think interesting and likeable have to be mutually exclusive either though!

I still can't believe this is based off of Little Women. They did a pretty good job with casting & costume, the maknae sister resembles Nam Ji Hyun a bit & I can believe that they're sisters.

It gives me makjang x crime thriller vibes with some familial undertones? I dunno, I think I'll spend majority of the show trying to find nuggets that reflect scenes from the actual novel by Louisa May Alcott.

I wonder if the impact of the family poverty and one sister trying to escape it through marriage is what gave them the idea to look at a more modern take of gaining money through ulterior motives and then it all went over the top and ridiculous from there.

I think they tried to Piggy back off of concept of other successful stories in trying to come up with a modern twist.

I don't know where they'll go with this. While unexpected gain & money problems can be sobering ways of growing up, I dunno if that's the warmth we expected.

This actually really bugs me. Why take the name Little Women if the only elements this drama will have in common are sisters (and not even the same number) and poverty. And the Marches always had their own home, a domestic servant, and enough to eat, and enough to share with those who were poorer than themselves. The use of the name Little Women seems like a cynical way to draw attention to the show.

Because it's a loose adaptation. 3 little women against the world, maybe they're trying to play it off of that. We won't know what we're truly in for. Trailer 1 could be total misdirection like good teasers are supposed to be.

I’m also surprised at the seeming lack of connection to the source material. Little Women is a coming of age story, about painful but maturing realizations. There are also four sisters.

Yeah, this bugs me too. I think they should just clarify and say that Little Women inspired them to write a primetime kdrama featuring 3 sisters as leads....though the struggle between the haves and have nots is already pretty common in kdramas. So are family-centric stories.

The novel was titled Little Women because it was about the sisters who are on the cusp of becoming young women and was quite slice of life. The oldest sister, Meg, was only 16 when the novel began.

Not going to lie, as an absolute non-fan of the original Little Women and all of it's adaptations (I don't know why, I just get bored whenever I try. It's like Little House on the Prairie but without the prairie. Snooze.), this looks more interesting than I was expecting. At least "interesting" as in "wildly different from the original". Not sure I'll watch, but I'm more likely to than I was before.

I LOVED the book when I was a kid and re-read it hundred of times through teenage years. Then I tried reading it again in my thirties and it was just one long preachy sermon about being good and feeling guilty. Incredibly boring. Maybe it only works for very young kids.

Maybe that was my issue. I just thought of it as in the same category as Little House on the Prairie (et al.) and Anne of Green Gables, neither of which I was able to finish. I've always assumed this was a deficiency on my part, so it's nice to hear it isn't for everyone (or all ages)!

Aw, I love the Little House books! I like the slice-of-life style and all the parts about cooking, farming, and making things, etc. But, I agree with you about the Little Women and Green Gables books, wasn't a big fan of those - although I do enjoy the movies.

Directing looks amazing, so I will tune in even if it's makjang (a genre I usually avoid).

I hope that the story will be well balanced between the 3 sisters and not only about Kim Go-Eun, not like in 39. Because from the trailers, she's the character I'm the least interested in, I don't really like the ones who takes money that is not theirs and are surprised to have troubles after.