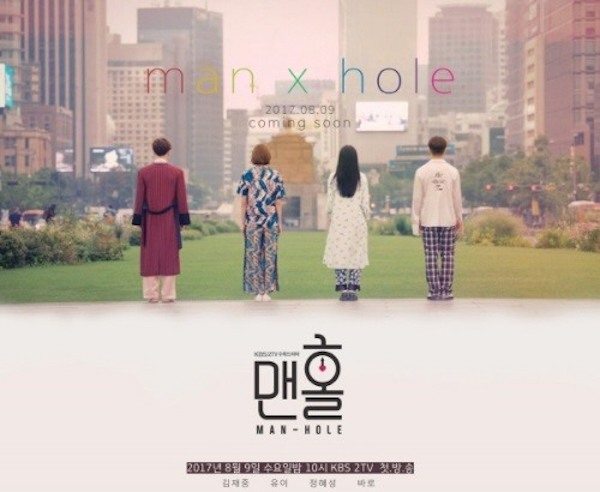 Bahahahaha! I can’t contain my laughter at this latest teaser from Manhole, the upcoming time-slip fantasy rom-com starring Jaejoong (Spy) and UEE (Night Light). They’re dancing to the viral internet sensation “Pen Pineapple Apple Pen” song, and it’s absolutely hilarious. Sure, it adds almost zero info about the time adventure plotline of the drama, but I’ve been playing it on nonstop repeat for the past hour, so that must count for something, right?

The drama Manhole is about a unemployed neighborhood bum named Bong Pil, played by Jaejoong, who accidentally discovers a manhole that lets him travel through time, but the downside is that he can’t control his time-destination. When his best female friend (also the woman he’s been crushing on one-sidedly for the past 28 years of his life), played by UEE, suddenly announces her impending wedding, he immediately thinks the manhole will be the key to his main mission: Go back in time and capture his girl’s heart.

Unfortunately for him, but funny for us, he ends up in random times where any tiny action he takes creates a butterfly effect, changing the present. So the drama will largely be Jaejoong making mistakes through time and going back through the manhole to fix them, all the while trying to get his one true love to fall for him. I wasn’t sure if this would just be a modernized repeat of Operation Proposal, but the tone of this teaser suggests otherwise. 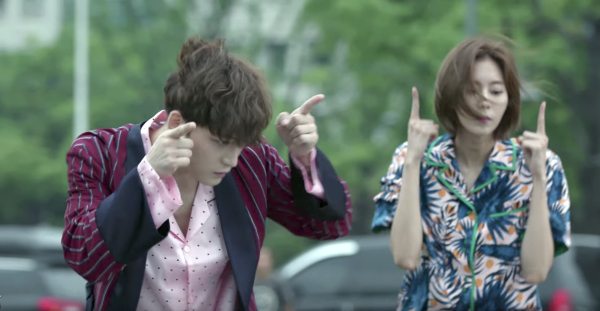 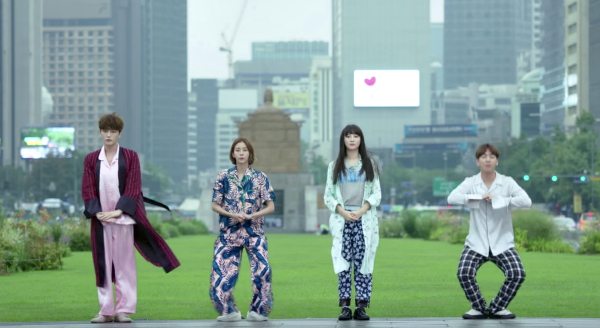 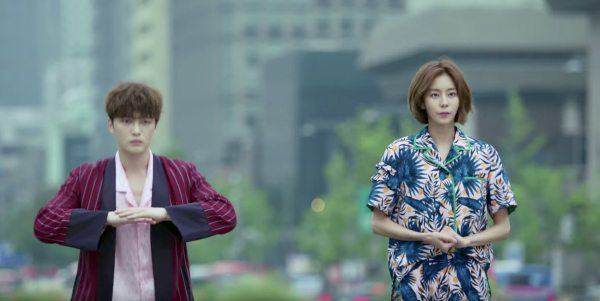 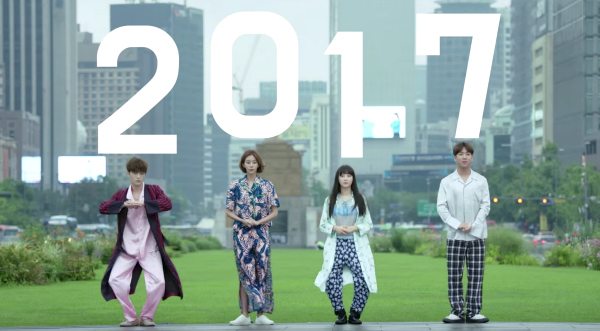 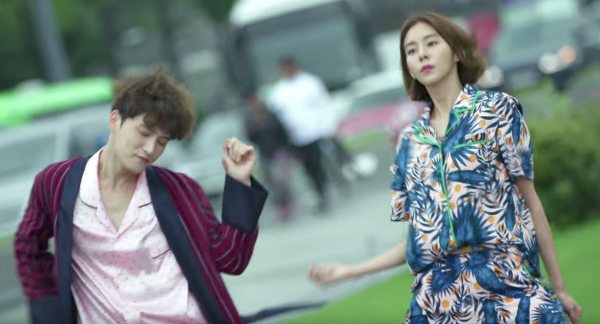 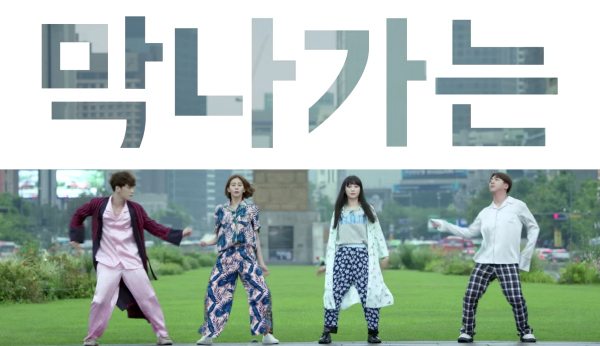 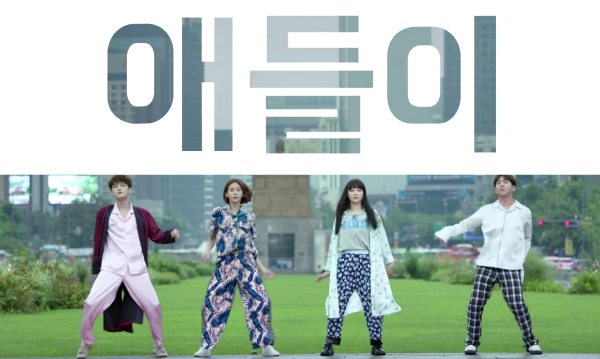 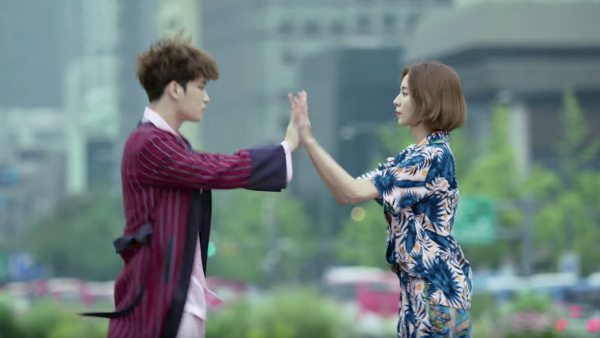 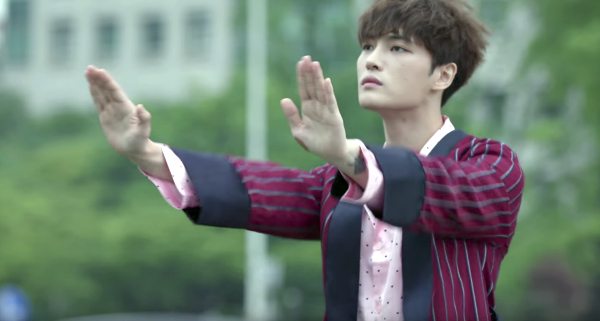 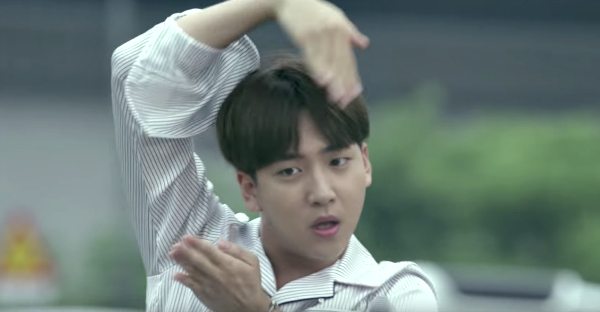 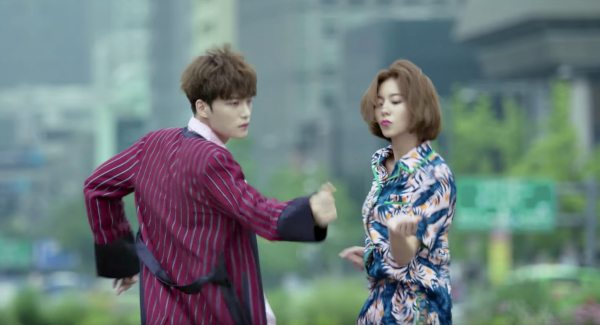 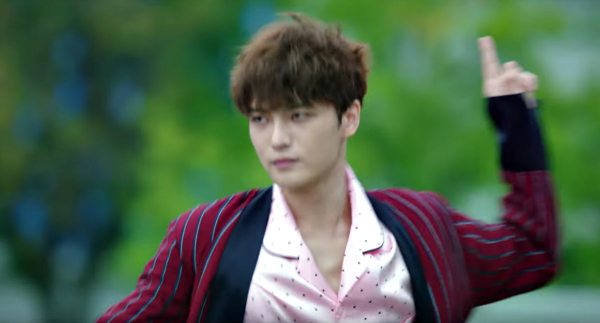 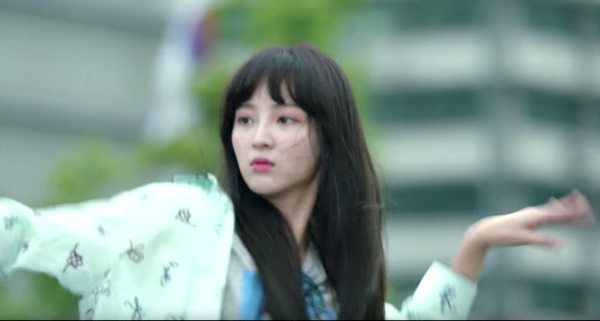 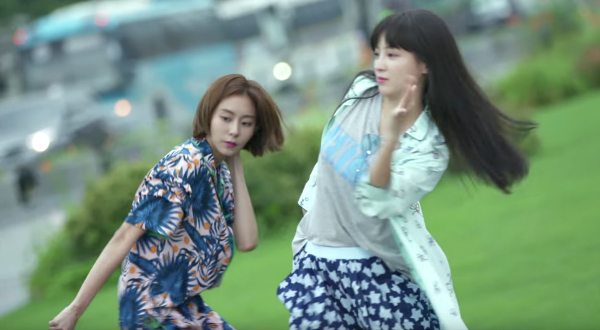 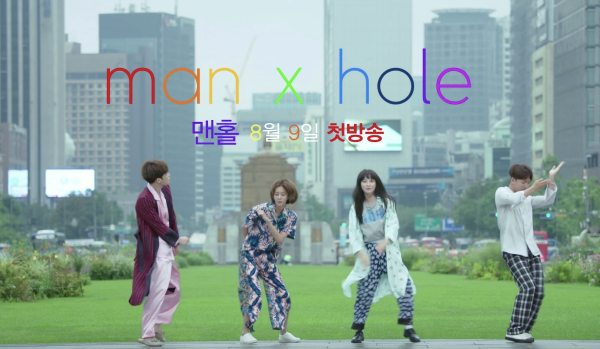 I laughed so hard at this!
Can't believe they're doing this with straight faces.
They have better dance moves than me though, lmao.

It's their straight faces that makes this ridiculous mess even more hilarious. I'm dying. But, I feel like Uee looks a lot skinnier than before. I hope she's okay.

I think that she looks much better in the past but something must have gone wrong so her face is now so V-shape like that. Anyway, I just so hope that's she's doing fine as I think she looks too skinny ... too too skinny.

She did her face, before Marriage contract. I don't think she hides this, as it's so obvious. She used to have chubby face, which was very cute. Not that she's not beautiful here. I really like her in Marriage contract, not bothered at all with her change.

LOL at the pajamas...and Jaejoong's hair...and welp I'm watching this drama mostly cause of UEE :D

I hope this means that the drama is going to be campy as hell, cause I'm actually in the mood for it.

Seriously! I'm thinking, I could totally rock that... outside! lol

I love that name. Can we please just have a compilation of all the dance teasers to date ?

I was just thinking the same!!!!

This is ridiculously pure gold ? , then thinking : what if they shooted it without the music : even weirder ?

While watching, I was thinking about the people driving/watching them film this. I'm really curious about their reaction lol

THANK YOU for reminding me of that wonderful drama! After reading your comment I subsequently did a Youtube search of the dance and look what gem I found...: https://www.youtube.com/watch?v=7xuXlpvWw1I

Who knew this drama was THAT popular?!

This is haunting me. I still have that weird af song stuck in my head. Pipinapple applepen???

I love this dance as well.

9 gadis is camping in the cells village (again)

???
This is hilarious. *put the drama to the top of my to-watch list*

omg this is the best! I re-watched MDBC "Bombastic" dance video about 15 times and this is just as awesome as that.

Man I would be so embarrassed to be them. In some of the shots you can see they are by a very busy road and you probably have people driving by thinking 'What the hell are those crazy people doing?'

Also, I feel SO out of the loop. I had no idea what the Pen Pineapple Apple Pen song was so had to look it up.

Boombastic is sentimental favorite of mine.

They're right in the middle of 'downtown' Seoul near the King Sejong statue (close to where MDBC Boombastic was filmed, too!), I was dying knowing how many people must have seen them film this.

I am not sure what to think about this. Another time-travel related drama! Not sure i can (will) watch... although it seems pretty fun. Maybe i will just only read the recaps... oh why, why koreans have to be so attractive???!!!! ?

Hahaha, I could get down with them at a party. Or on the street. Sure, why not.

A 28 year-old one-sided crush is the most pathetic thing I've ever heard. How do you crush on someone for that long?

I mean, if I ever saw someone who could do the PPAP with a straight face, I would probably be in love with them for 28 years too...

I agree lol. I showed my boyfriend this and he shook his head and said no one would ever be like that in real life haha

Adding: JaeJoong, UEE and Baro are Kpop idols.
It's true that they throw away their dignity a.k.a dancing skills -
out of window to rock this Pineapple pen dance. :))

Being a cassie, I already knew Jae has zero dancing skills ?

Jung Hye-sung and Baro side to side makes me think of puppies :)

Lol, looks like a fun drama. I'll add this to my list of upcoming dramas to watch. So many new dramas recently!

I'll have to watch the trailer after I get home from work. This looks funny!

this is hilarious. omg. May this quirky virus persist through the drama!

Also this reminds me of Seolhyun's and Heechul's recent G-market ads xD
The quirky dancing, the minimalistic beat and lyrics, the dead-pan expressions xD Only difference is they're not in pyjamas lol

I was playing this teaser and I heard my daughter scream from her room "Mom, are YOU listening to Pen Pineapple Apple Pen?" She was horrified.

All I could see is UEE.
The girl seriously got the move and groove.
And I love her physique and hairstyle. She's gorgeous.

When she does that arm flailing thing? It looks like she has no bones in her arms--they're all wavy.

Please show, live up to your wacky premise! *rubbing hands in glee for Aug 9*

I love that trailer! Absolutely hilarious! ??? because of that this drama is now on my radar. ??

I'm feeling second hand embarrassment from this ? it's too hilarious!

The synopsis does remind me of Operation Proposal tho. But no matter how much I forever love YSH and his portrayal of a somewhat mediocre character, that drama was absolute crap. The story, they way it went back and forth with no end in sight... I don't know if I'm ready to see another drama with a similar synopsis.

I kinda want UEE's pajama XD It looks super comfortable and cool, I want to wear it on a lazy Sunday

I might check it out after this hilarious teaser, plus there's Baro :) uri squirrel rapper
(though he's no longer has his cute long teeth)

Hahaha! LOL @ "throwing dignity out the window" description for this dance. For Jaejoong and Baro alone, I'm looking forward to this series. Nevermind if the title still makes me laugh no matter what.

I wasn't sure I was going to watch this. Now there's nothing that can keep me away from it.

This teaser was enough to convince me : I'm in , regardless of the story! Can't wait for it to start !

This looks so cute and fun! The video gives no info about the show but who cares when it's this entertaining. I'd watch on this alone.

All of UEE's After School idol experience has culminated in this one trailer.

omg XD I'm dying!!!
Just how many takes they had to take to pull it off with the straight faces lmao.
Plus, comic trailers (that have nothing to do with the plot or tone of the show) seem to be all the rage now & I don't mind because they are so fun. I think I first saw the style in first trailer of MDBC.

Anyone else excited for Baro?? Master of Noodles was not great, but Baro's performance was excellent! I hope this drama is great!

Meee! Not really a fan of Jaejoong but I'd watch this for Baro ?

Me = Foaming from mouth ?

How will I survive this drama!
*fingers crossed*

Also I loved the trailer for it's sheer ridiculousness PPAP *STARTS DANCING* ???

This is hilarious!! I love how they're so serious dancing like that, I can't stop laughing!

Oooh their outfit is so hilarious and the expression along with that dance ... Perfect perfect, PR stunt! Kiddos to the team who came up with the idea!!

Hahaha. My type of dance party.
And is this a full drama? I was of the impression it was a drama special! Is it another show I was thinking of? ?

This totally sounds like jdrama operation proposal. Plagiarism much? Sigh, at least they could have said, 'inspiration taken from the said drama or something'.
And yeah, Uee is totally unrecognizable here. Can't fathom all the hype with losing weight with Korean actors, first park shin hye, now Uee. :S

Its maybe sound like that Japanese dorama but i think the whole story thing is different from that, I'm gonna wait for more details from this drama.
But quite funny though the main lead yamapi from the Japanese dorama is jaejoong best friends

This is a cry for help: It's a day later and I'm still laughing! It is so freaking good. Make it stooop!

Sounds more like "Quantum Leap." now if only they gave him a diferentsiaali body and a different gender every time...

From my phone as you can tell

ahhh, Quantum Leap - one of my favourite 90s shows

The Manhole characters' dance routine in this teaser is crazy weird funny! And for them to keep at it with such serious faces is pure gold! Haha!! Hope we get to see the BTS of the 4 of them cracking up! Bet they made a lot of 'NG's'! :D Looking forward to Manhole (it'll be my first drama of Jaejoong)!

On a different note, I'm quite concerned about UEE. She is freakishly skinny now (it's a far cry from how she looked in "You're Beautiful") that it doesn't even look healthy or appealing at all! Frankly, she looks anorexic to me. Hope her family, friends and management are making sure that she's not doing anything detrimental to her health.. before it's too late. :(

I really needed a dose of extra cute in pajamas this morning! \/

How fun! I knew nothing of this before, but I'm all in if the take on time travel is comedic and the tone is anything like this teaser.

i wonder how many takes they have to do for this. it is hilarious.

dancing teasers are honestly the best.
i'm thankful to 'moonlight drawn by clouds' for starting (or maybe bringing back..?) this trend!

I think it would be more of a bringing it back. Maybe there were more before but the very first dancing teaser I remember was from High School King of Savvy :)