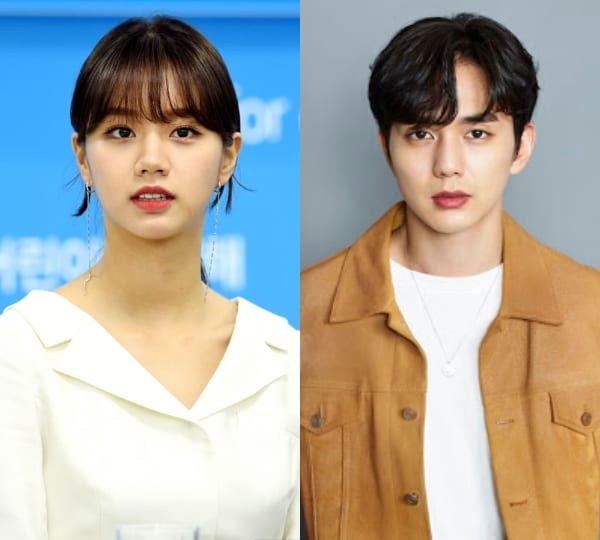 It’s been reported that Hyeri (Miss Lee) and Yoo Seung-ho (Memorist) have both received offers to star in KBS’s upcoming When Flowers Bloom, I Think of the Moon. The project is a sageuk drama set in the Joseon dynasty during a period of history that had the strictest alcohol prohibition laws. If Hyeri accepts, it will be her first-ever sageuk.

When Flowers Bloom, I Think of the Moon will tell the story of a woman who secretly brews liquor, a civil bureau servant tasked with enforcing the prohibitionist policies, and an alcoholic crown prince who goes as far as climbing over the palace walls to get a drink.

Hyeri has been offered the part of the woman brewer. She who was born to an aristocratic family but life dealt her a rough hand. Her father died when she was thirteen years old and her mother fell ill soon after, and she effectively became the family’s breadwinner. She worked hard to cover the costs of her mother’s medicine and her older brother’s books. She did all types of odd jobs to a futile financial end, and it came to the point where even the neighbor’s slaves began to look down upon her and her family. Despite looking every inch the noble lady, she’s tough and as strong as any man.

Yoo Seung-ho was offered the part of the civil bureau servant, an inspector who burns with passion to succeed in order to restore his family’s honor. There’s no word yet on who might play the crown prince.

Directed by Hwang In-hyuk (Doctor Prisoner) and written by Kim Joo-hee, When Flowers Bloom, I Think of the Moon will begin airing in the latter half of this year.

Are the writers trying to one up each other with longer drama title?

The crown prince character sounds like a hoot already, but do we need a Joseon candy..?

A show stealer part if there ever was one.

Sageuk = moon and a long title! I'm very bad at memorizing names and it's coming more confusing for me.

I feel really bad for the sun with the moon always getting the attention.

Lol! Where is the parity?!

I like YSH, but everything in me is screaming No. So maybe the previews will interest me.

A saguek bootlegger comedy (?) What could possibly go wrong? Not to mention the two potential leads have contemporary acting styles I have a hard time believing can be transitioned to period drama...unless they are going for a Bugsy Malone vibe with an (somewhat) older cast.

I could agree with you about Hyeri's acting style not fitting, but certainly not Yoo Seung Ho. He has done several historical dramas since he was a child, and he's one of the most experienced actors his age in this genre. His last historical drama was Ruler: Master of the Mask in 2017, and he basically hard-carried that drama. He's probably as comfortable in hanbok as he is in modern-day clothing.

I agree wholeheartedly with @rooroo on this. He's got a range of talents as far as genres. If one checks his wiki page, his early career is literally littered with historicals--he was immersed in the genre early and worked with some really incredible talent to watch and learn from. Yes, he played the younger version of X lead/secondary in some, but he's got the experience in spades.

@halofan68, If you haven't seen him in Warrior Baek Dong Soo, you need to make time to do so, as it will at least sway--if not abolish--your concerns.

Gah! Now I want to watch that again. 😁

Gee, seems I'm not the only one who isn't very impressed.

So, who would Beanies cast as the Prince?

Now, that would be an interesting choice!

When Flowers Bloom, I Think of the Moon Ms. Crown Prince..?

Is this the year of the Sageuk?

2021 sageuks are more successful in the rating department.
Fusion rules. It's cheaper and shorter.

Possible upcoming sageuk attractions.
With RIVER WHERE THE MOON RISES having begun its run I am aware of 8 projects in the sageuk/historical genre:
1-4: , JOSEON EXORCIST, RED SKY/HONG CHUN GI, BOSSAM—STEALING FATE, RED CUFF OF THE SLEEVE. The last two I have not heard much about.
5. tvN’s TALE OF THE SECRET ROYAL INSPECTOR AND JO YI
(Jo Byung-gyu),
6. KBS’s AFFECTION/YEON MO (Rowoon),
7. Hong Sisters’ REINCARNATION/RETURN ??
8. KBS’s WHEN FLOWERS BLOOM, I THINK OF THE MOON (Yoo Seung-ho).

Red Cuff of the Sleeve : I wanted to watch Kim Kyung Nam in his first main role even if the writer did The Ruler... But there is no news about this drama >_<

Affection/Yeon : Neither Park Eun Bin nor Rowoon are confirmed for this drama... It's sad I love both.

Kim Kyung-nam is part of the cast of OK KWANG SISTERS a 50 episode S/S drama on KBS2 supposed to start airing 13 March. He may not wind up being part of RED CUFF unfortunately.

I don't think there's been any news about Red Cuff since like last June though? So who knows? *shrugs*

The Hong's are doing a sageuk? Like full sageuk? Oh help.

Sic, this is my ‘source’ for the Hong Sisters new drama:
https://zapzee.net/2021/01/01/masters-sun-hotel-del-luna-writer-hong-sisters-returning-with-another-fantasy-romance-drama/

I ask the drama gods for a pre Joseon/ Three Kingdoms fantasy sageuk and thEY FRAKKING GIVE ME A HONG SISTERS DRAMA? ARE YOU SERIOUS? Brb gonna go scream at a wall.

I... is dramaworld intentionally trying to hurt us?

@egads RIGHT?!?! Is this punishment for something?? What'd I DO!

@sicarius, maybe they enjoyed your shitposts so so much, that they are manufacturing content to inspire you?

@egads
Is this the part where I start crying? Why couldn't they just let me die in peace.

(I'm gonna be very honest with you; I do not I have it in me to sh☠️tpost another Hong drama, specially written for me or no.)

@sicarius I support your decision to not descend into madness. Well done.

@sicarius: But, but, but...I want to hear your take on the "love of young sorcerers who read the universe and its energy"!!!

(No, really, I do. Yet I also totally understand and emphasize with your anguish over this matter. So conflicted. 😔)

Trying to think what it would take for me to watch another HS' drama after I endosolistrated the last one... hmmmmmmmm. Nope can't think of anything.

Park Eun-bin and Hyeri (sp?) should switch male leads.
It'd be great to see Yoo Seung-ho and his leading lady again in a sageuk for the 3rd time. This time as leads.

You know what I'm looking forward to?
Byun Yo-han in the "The Book of Fish." I freaking miss him.
https://www.youtube.com/watch?v=d10zLwg7Sp0&ab_channel=EonTalk

Director Lee Joon-ik is my favorite sageuk film maker. He knows how to put together a talented cast. This film has all of my favorite veterans too.

Thanks @kiara for the heads up on THE BOOK OF FISH. It looks great. Will it be in b/w?
I just watched Director Lee Joon-ik’s THE THRONE (2015) (Viki US) about Prince Sado. It was terrific.
I actually watched the trailer again once I realized Byun Yo-han had been in MISAENG. Wow. What a role. I didn’t recognize him at all. I would love to see it on the big screen. I hope it will be available somehow.

@marcusnyc20 bong-soo you'll love him in SFD and MR SUNSHINE. Wait, you already watch both right?

Anyway, I have no clue where to watch it yet but I'm guessing that it was meant to be released ahead of the Cannes festival.

I'm glad you enjoyed SADO. I don't want to watch another sageuk based on his life again. That was Sado for me.

I'm thankful to Lee Joon-Ik for introducing me to talented oppas like Lee Junki, Kang Ha-Neul, Park Jung-Min and my girl Seo Ye-Ji.
I knew Yoo Ah In, Lee Je-hoon, Moon Geun-young before worked with them.
I'm always happy when he take young actors from dramaland and showcase their talents in his movies.

I wonder who is going to be next?

Isn't Yoo Ah-in in The Throne? I don't remember Byun Yo Han in the movie.

Just in case anyone is confused by @marcusnyc20's post, The Roots of Throne was recapped under the alternate English title Six Flying Dragons here at DB.

(Another show I keep meaning to rewatch, but sooo many eps and I know I'll end up marathoning it!)

Poor Rowoon. He's holding his own in his current drama.

Forgive me for being selfish.
I've never seen him in anything yet.

It's good to know you're not bearing a grudge.

FOX BRIDE STAR is my only Rowoon drama. Fwir he gave a nice performance. He certainly wasn’t the problem with FBS.

So many Sagueks!
I don't think I can handle that many a year.
I loved Mr.Queen but I'm already dropping RIVER WHERE THE MOON RISES at Ep.2.
My power of concentration doesn't last long for Saguek unless story/plot is something new...

Shoot, RIVER WHERE THE MOON RISES is all poetic but I just call it MOON RIVER, and this one will be relegated to MOON FLOWER. Yep, you can thank me later.

Am I the only one having a linger cringe at the description part "Despite looking every inch the noble lady, she’s tough and as strong as any man."? 😬