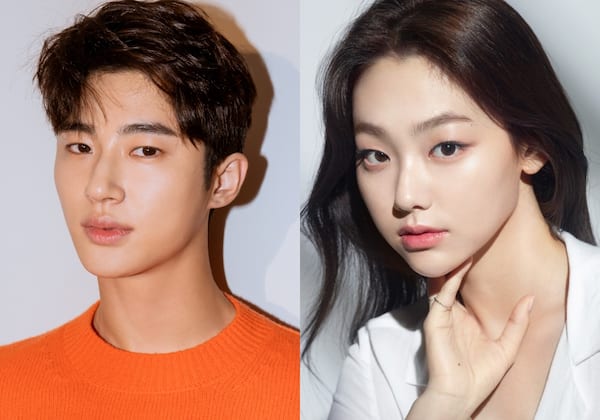 Byun Woo-seok (Record of Youth) and Gugudan’s Kang Mina (Hotel Del Luna, Mama Fairy and the Woodcutter) are rounding out the cast of KBS’s upcoming drama, When Flowers Bloom, I Think of the Moon. They join leads Yoo Seung-ho (Memorist) and Hyeri (Miss Lee) in this fusion sageuk set during the alcohol prohibition period of the Joseon dynasty. Hyeri plays a secret alcohol merchant, and Yoo Seung-ho plays a civil servant tasked with carrying out prohibition regulations.

Byun Woo-seok plays a rebellious Crown Prince Lee Pyo (rebellious as in angsty bad boy, not the treasonous unfilial son type of way). According to his character description, he possesses “a face that lights wherever he goes.” Interestingly, he wasn’t originally born into the role of crown prince, but somehow he’s the only prince left so he’s next in line for the throne. Due to his position, he’s found his only loyal, steady friend to be alcohol. So, he often sneaks out of the palace to have a drink, and those who know his habit have labeled him an eyesore to the country.

Kang Mina plays a reputable family’s only daughter, Han Ae-jin. Her nickname is “Joseon’s straightforward lady” because she likes what she likes and is just as transparent about her dislikes. If she wants to do something, she doesn’t rest until she’s accomplished it. Now that she’s at a marriageable age, she knows she definitely wants a handsome husband, and when she finds a (face-wise) suitable partner, she’s very direct about her feelings.

Written by Kim Joo-hee annd directed by Hwang In-hyuk, When Flowers Bloom, I Think of the Moon begins filming in May, and will be broadcast in the latter half of this year on KBS.

Prohibition at any point in Korean history is a bit hard to imagine. Wonder how that worked out for them?

Yeah. When exactly was this prohibition era hmmm

I knew that this sageuk was considered as late sageuk era and I also knew that Mr. Sunshine was one of the sageuks set in the late Joseon era and it was considered as "late sageuk era" too. I couldn't believe that during the 1920s, flappers and bob hairs became an items like US did. I want to see Korean flappers and bobhairs but a little bit of jazz music that was popular during the Roaring Twenties. I watched Hymn of Death with the 1920s costumes and its historic settings will help it to provide When Flowers Bloom, I Think of the Moon costumes and sets.

@magajesj The American context is totally different though. Korea was under Japanese occupation in 1920s. I know there was alcohol prohibition under the Japanese, but by then there couldn't be a Crown Prince traipsing around. So the drama has to be set in the late 19th century, as you say, or before... maybe it's set in a fictional Joseon and we don't have to worry about historical accuracy.

@lordcobol will enjoy this article. Some Americans like Horace N. Allen (same guy from MR SUNHINE I think) were shocked to see so many drunk people around 1900 Joseon, and they to convince the government to ban the sale of alcohol. "The astonished Korean official refused." Naturally. 😂https://www.koreatimes.co.kr/www/nation/2017/12/715_241637.html

Before this it makes sense, as @kiara said below, that it was forbidden to make liquor in times of natural disasters to save rice for eating.

I saw that article before I commented -- googled a couple things like "Joseon prohibition alcohol" just in case there might be something I'd want to take into account.

This is an English translation from King Sejong's Annals. (Date- January 23 1420).

"The King Speaks on the Issue of a Wine Prohibition"

Whenever a wine prohibition is in place, those who drink refined wine have never been punished, and those who drink, buy, or sell unrefined wine have been punished instead. Their situations are pitiful. Hereafter, when wine is prohibited, [it] will not be prohibited for those who [drink] to greet or see off their parents or brothers, for the old and the ill who drink [wine] for medicinal purposes, and for [those] who buy or sell [wine for these reasons]. However, for those who gather together and drink [for pleasure] and [those] who [drink] to greet or see off people other than [their parents or brothers], [drinking] will be utterly prohibited. What do you think of this? Have the State Council 議政府, the Six Ministries 六曹, and inspectors and censors 臺諫 discuss [this] and report back to me."

Alcohol prohibition was enforced only during natural disasters.
It takes rice and grains to make alcohol like makgeolli so it makes perfect sense.

I can't remember what show it was (another historical), but there was a prohibition then (due to drought/crop availability as kiara mentioned). There's the usual shennanigans of the upper class still using some of the scarce resources to supply their alcohol needs while the poor are starving.

just looked up the countries that drink the most alcohol and SK is nt high on the list so this can check out lmao. it makes sense abt the prohibition for rice and grain. quite interesting.

Byun Woo-seok plays a rebellious Crown Prince Lee Pyo (rebellious as in angsty bad boy, not the treasonous unfilial son type of way). According to his character description, he possesses “a face that lights wherever he goes.” Interestingly, he wasn’t originally born into the role of crown prince, but somehow he’s the only prince left so he’s next in line for the throne.

Normally if a princeling mysteriously becomes the only surviving prince, I'd think "murderous" rather than "rebellious" or "treasonous". Now excuse me while I go hire a food taster.

Sometimes they're the survivor because the family line became so many times removed, or they're a son born of a lower concubine mother rank sort of thing too that was shuffled off to some remote area to keep their profile low and prevent inner court strife.

Yoo seung-ho back in saguek...I'm tuning in!

Hehe! But YOO SEUNG-HO IN SAGUEK!!! I'm damn sure his hanbok look will make me ignore everything else..plotholes included! 😄

i dont trust idol actors and never will but she's a pretty girl (which honestly i hate is the first thing i thought. ugh.) um this sounded good until the "now that she's of marriageable age....she wants acute husband" although the words before were "she does whatever she wants" i'm not quite sure why that centers around a man who loves alcohol but anyway. fine. lol.

i'm probs not gonna watch but i like the premise up until the marriage part. dumb rich boy who can't drink and girl who does whatever the hell she wants the way she wants it. what's the point in having that kind of character if the prize is marriage? ANYwAY

I don’t want to be rude, but, couldn’t they have gotten any other actress?

Age isn't the issue. They only have a one-year age gap, which is perfectly fine by any standard.

My problem is that Hyeri is a mediocre actress. The only drama where I found her remotely watchable was Reply 1988, and I’d argue she was still one of the weaker cast members in terms of acting.

seriously?? only one year apart? i thought Yoo Seung Ho was a few years younger...

i loved her in Reply 1988... hated her in Dandarawhatever the Entertainer one with Ji Sung... but i think she's cute and the drama i mentioned was not representative of her abilities...

and i just love that she's Ryu Joon Yeol's GF.... so i will love anything that she is in, from this point on!
*fangurling Hyeri & RJY*

When Flowers Bloom, I Think of the Moon Children.

Both of my sageuk slump and my first-ever temporary sageuk hiatus will end with this. Yes, I'll watch this. :) I hope it will considered streaming on Kocowa, Viki, Iqiyi or Viu (for Asian territories only).

I absolute adore Yoo Seungho but he really picks the worst worst worst series all the time, it feels like others younger than him or started later in acting than him have gotten ahead (Park Bo Gum for example who pretty much debuted in a 3 minute role in Seungho’s movie Blind) and it’s just so sad and unfortunate.

I told myself Id watch anything of Yoo Seungho’s no matter how bad it sounds but really, Hyeri?? And the plot just sounds so basic and boring, even worse than The Ruler / Mask.

I almost wonder if Seungho has just gone around and offended so many people he doesn’t get castes with good scripts and roles anymore. Can I just see him in something watchable cast with a girl who has actual good chemistry with him. I think the last time I remember was Operation Proposal with Park Eun Bin. And Go Sung Ah in God of Study. Seriously..... these idol actresses need to stay far from Seungho.

Hope Yoo Seung Ho has been doing some heavy lifting lately because he is going to have to carry not only his leading lady, but now the 2nd leads too. Ouch! Poor boy. What did he do to deserve all this acting dead weight?! :(

I think the drama must be very male-lead-centric in order for them to cast the way they did. Even when dramas cast a male and female lead, half the time, it's really just one lead with a "lead supporting actor of the opposite gender" as the other lead.

Also while Yoo Seung-ho's amazing, his last 3 projects haven't brought in the ratings and he hasn't done a movie in years. He tends to pick projects that are interesting to him, but not to the general audience? I hope for his sake that this project will get a lot of interest.

Still think at this point they're choosing these names by algorithm.
Have I mentioned the universe hates me?

A weird combination of actors, but the alcohol prohibition backdrop sounds interesting. Happy about the main leads not being royal, but not sure about inserting a crown prince in there. Excited for Yoo Seung-ho to do a drama that sounds interesting to me since I didn't pick up Memorist and I gave up on Strange Hero. As for Hyeri, while I don't like how her voices sounds too muffled in her line delivery, I like how she seems good at blending into the average jane look and her variety personality.

I am a fan of Byun Woo Seok since ROY.. Also, I think he and Kang Mina starred in a web drama together awhile back.. either way, Kang Mina did something superb in her last life because all of her leading men have been gorgeous. If I were her, I would do several retakes on those kissing scenes.. lol