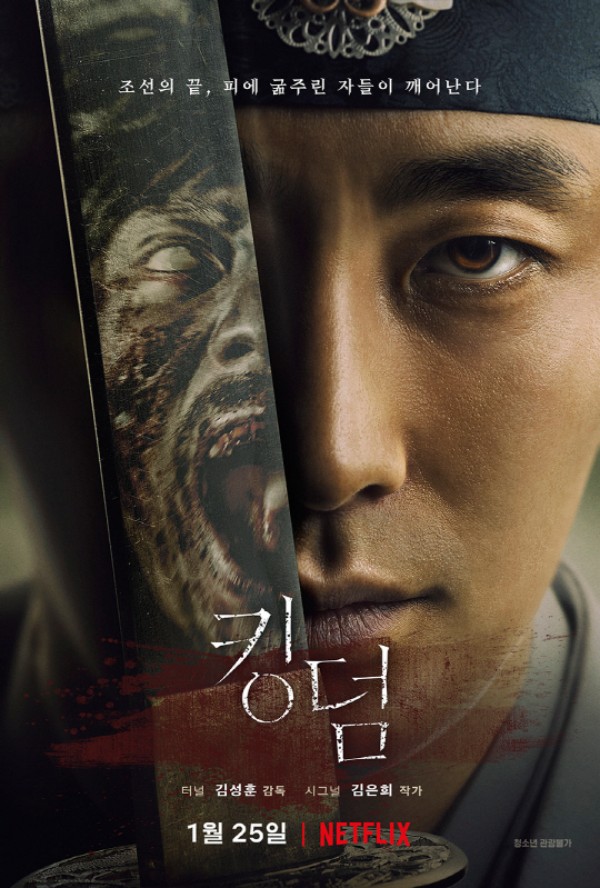 After nearly two years in development, writer Kim Eun-hee’s (Signal) epic zombie sageuk Kingdom is about to air. The poster above captures the chilling atmosphere of the drama: “The end of Joseon, the blood-starved masses awaken.” A teaser and more promo stills have been released, increasing expectations and hype.

Joo Ji-hoon (Along With the Gods 2) stars at the crown prince, who is framed as a traitor to his country when he learns of his father’s existence as a zombie. On the run, he discovers that a zombie plague is spreading throughout the nation, and he’s helped along the way by a nurse, played by Bae Doo-na (Cloud 9, Matrimonial Chaos), in uncovering the mystery behind this disease. Throughout it all, the corrupt prime minister, played by Ryu Seung-ryong (Dorihwaga), manipulates politics such that he remains the greatest power in Joseon.

The trailer starts out with Ryu Seung-ryong’s character telling the young queen, played by Kim Hye-joon (Matrimonial Chaos), that true power is when no one can question him despite the countless corpses that have been thrown into the lake by his order. And we see the bodies underneath the lake, weighed down so that they’ll never rise again.

Joo Ji-hoon begins to narrate that he saw a monster in the palace, and he connects that with his father, the king, whose health has been unconfirmed for a long time. We see the truth—that the king is the monster trapped in chains, kept there by Ryu Seung-ryong’s machinations.

The crown prince travels to the countryside to find the mystery behind his father’s condition. And there, he realizes the problem is greater than he ever imagined. He’s warned by Bae Doo-na that the dead arise from their slumber soon, and scenes of what happens when the zombies attack are shown. That begins Joo Ji-hoon’s quest to wrestle power back from Ryu Seung-ryong and exterminate the zombies that plague the kingdom.

Oh my gosh—this looks both beautiful and horrifying! The first episode of Kingdom will be available on Netflix starting January 25 of the next year. 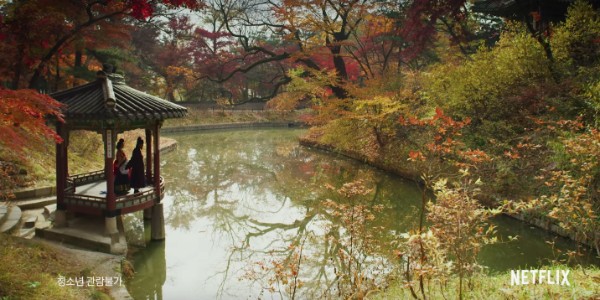 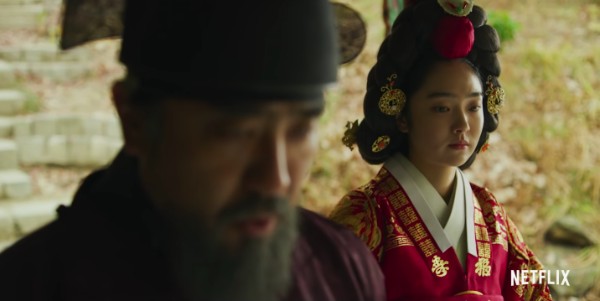 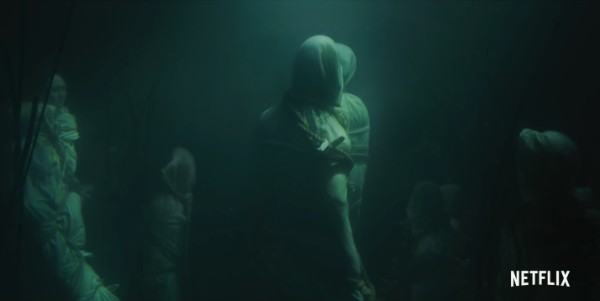 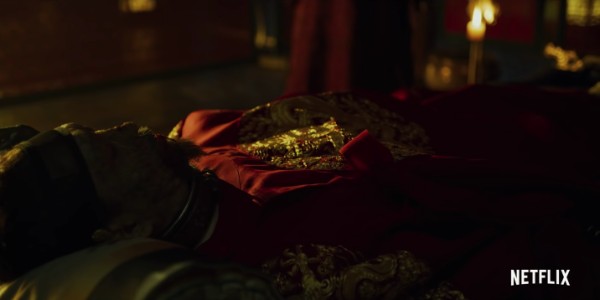 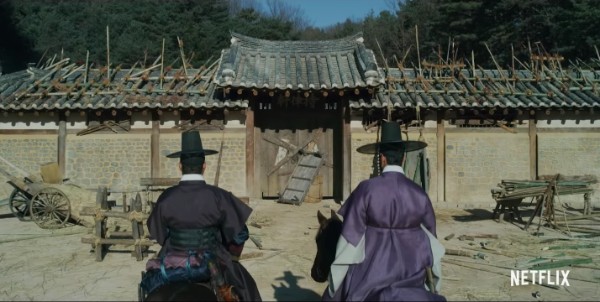 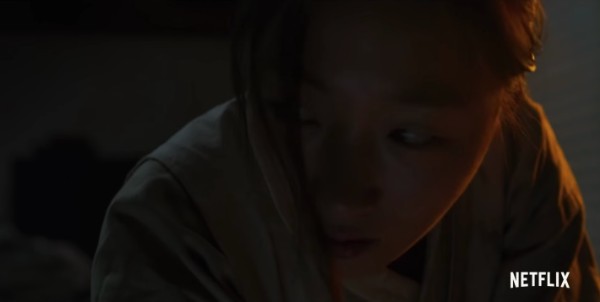 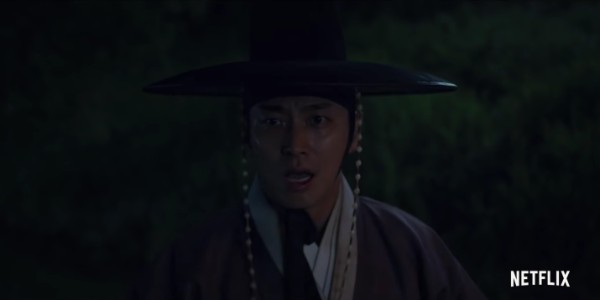 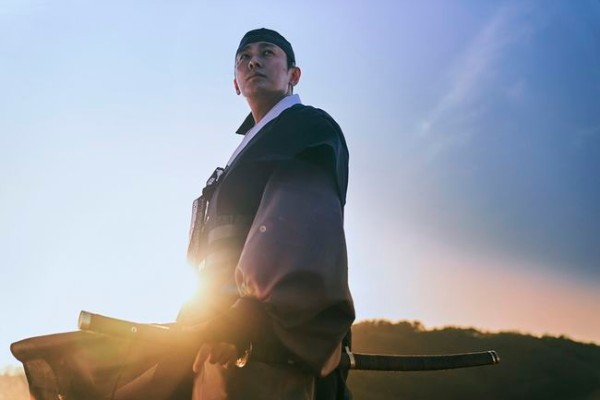 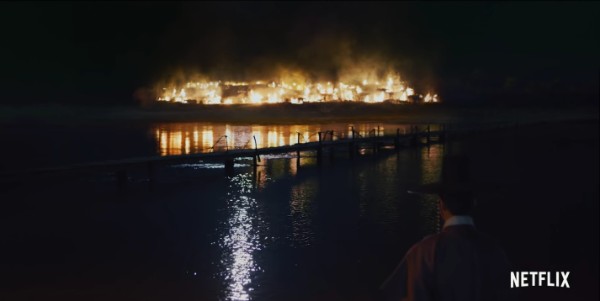 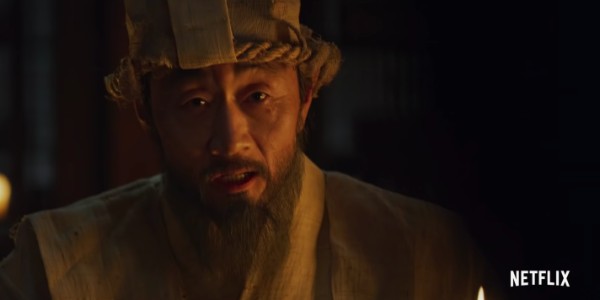 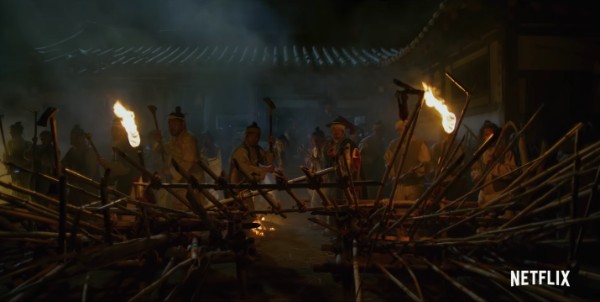 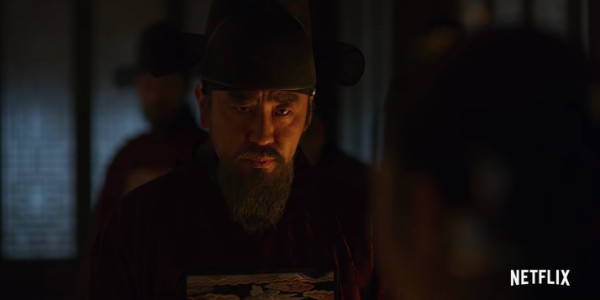 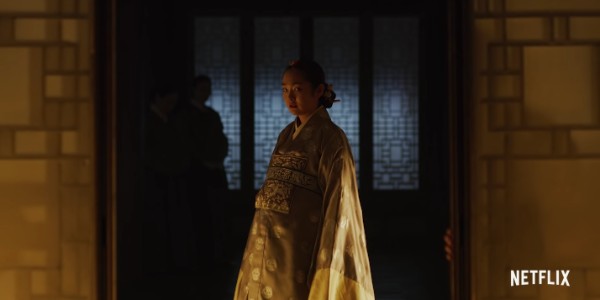 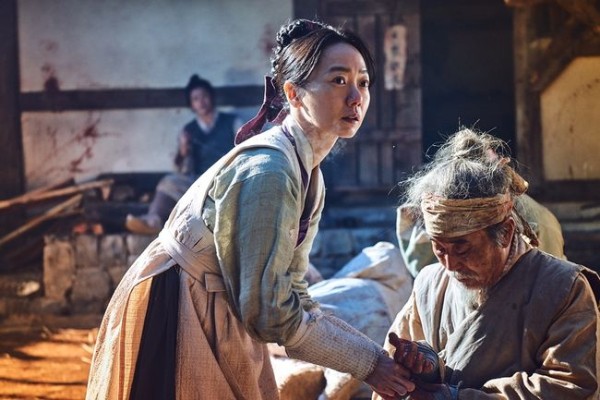 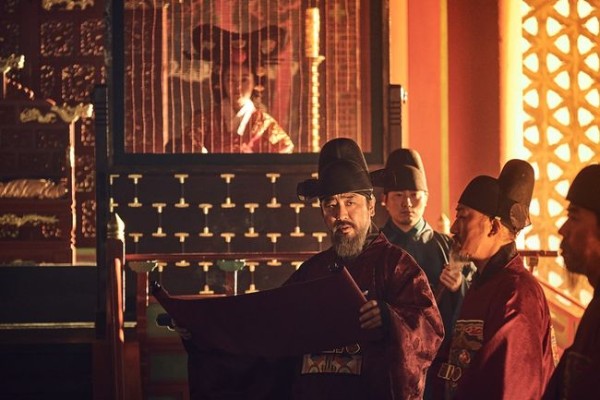 Wow looks quite interesting. Wasn't there a zombie saguek movie recently with Jang Donggun and Hyun Bin? The trailers for that one did not interest me but why does this one interest me? LOL I look forward to checking this out on Netflix!

Yes "Rampant" but it is a movie.

saw Rampant movie and it was worth to watch. The premise seems the same though. Hyun Bin go back to Korea from China to fulfill the last will of his brother who killed himself (suicide) to save his men from torture from the manipulation of Jang Dung Gun. When he arrives the city was in chaos as there is an epidemic of zombies. The King his father becomes zombie too.

actually movie is ok.. more gory than busan though..

but this actually kills my interest, because it is going to be rehash.. with the evil minister turning into the zombie at the end like the old guy in busan (W's dad)

sorry just ot be clear, this so looks like the rehash of rampant

Meh. That got bad reviews. It's just Train to Busan 2.0.
I trust writer Kim Eun Hee to make the drama more interesting.

2 bebeswtz❣️Xiao Zhan is my happy virus

Hri roo and Ma roo back together again. This time fighting off zombies. I am stoked.

I didn't even look at the plot or the actors: all i can see is that Kim Eun Hee, the best korean tv writer is back!
Just writing her name made all my Signal's feelings rush again...

+1
Signal was great, Sign very good, 3 Days also good. I haven't seen her do any lemons. I don't know anybody with a better track record.

Exactly! Her filmography is flawless: she worked with the best PD, in projects for which she was lucky to always have the budget to execute her vision.
And the cast were consistently constantly excellent.
I haven't finished yet Sign, but what i saw looks indeed very good. 3 Days was excellent. Signal was perfect.

Considering the time she took to write Kingdom i'm certain, it's a solid project at minimum.

I really loved Signal but this seems too much for my poor little heart to bear... just by looking at these pictures!! 😵😵😵😱😱😱

I'll even watch a zombie drama because of Joo Ji Hoon and Bae Doo Na ^-^I hope I'll enjoy it as it is not my cup of tea.... usually speaking. But I'll try for my favorite K-actors.

I can't wait-- all the hearts for Bae Doo Na, and I loved Signal!

I'll add my voice to all the Bae Doona and Signal lovers here - yay!! Super excited for this. I'm not really into horror or zombies or anything in between, but with my girl Doona on board I'm all in.

Any guess as to what year its based in?

Yesssss, I feel like I’ve been waiting 500 years for this drama- bring on the zombies 🧟‍♂️

I always avoid zombie movies, but I watched Train to Busan for Gong Yoo. This time for Kim Eun Hee..

What a classy trailer. Feature film class. I waiting to see "Coming soon to a theater near You".
The writer of SIGNAL, Bae Doo-na from FOREST OF SECRETS and availability on Netflix are definite pluses. I am not familiar with the other leads work.
I think I am in but before making it definite I would like to hear what my Sageuk Seers @kiara, @pakalanapikake and @wishfultoki think of KINGDOM.
I am a bit confused but I think for 2019 here are at least 5 other sageuks that are supposed to air.

Sorry to take so long to reply. I seem to have missed reading this article. I've been on the lookout for KINGDOM since it was announced in 2017 (and bumped SIGNAL 2 a couple of years back to the end of Writer-nim's schedule). Finally it's nearly here. With
Ju Ji-hoon playing the crown prince, I'm tickled to bits. I just realized that Heo Jun-ho is in it, too. Manseh, Hae Mosu!! (JUMONG reference.)

@kiara and I discussed juicy historical and technical aspects in the thread that starts here:
http://www.dramabeans.com/2017/09/joo-ji-hoon-ryu-seung-ryong-bae-doo-na-consider-netflix-show-kingdom/#comment-3059855

We discussed KINGDOM more recently in the thread that starts with the link below. I cannot help but think of TRAIN TO BUSAN, and hope that KINGDOM handles the human element as well as TRAIN did.

I found some provocative information on Mongol biological weapons that could be germane to KINGDOM:
http://www.dramabeans.com/2018/11/a-prince-faces-his-enemies-both-alive-and-undead-in-netflixs-kingdom/#comment-3339055

In the "rampant" speculation department, it also occurs to me that the liver-eating gumiho / nine-tailed fox / kitsune originating as the huli jing (fox spirit) of Chinese mythology could even be a factor in the story. That is pure conjecture on my part. ;-)
https://en.wikipedia.org/wiki/Kumiho

Perhaps Cheon-ha was bitten by a rabid gumiho. ;-)

Oh my, I somehow missed this, sorry @marcusnyc20! @pakalanapikake’s notification brought me here... sorry to say I can’t handle zombies, so I’ll be skipping this one.

I remember Pakalana made a list of upcoming historical dramas but I can’t find it. I know I’m enjoying The Crowned Clown immensely, and will then sit tight and wait for Asadal. I’m not sure about Haechi but I might give it a go (for Jung Il Woo).

Thanks for dropping by, @wishfultoki! I know how you feel about zombies. I got traumatized by the 1931 Boris Karloff version of FRANKENSTEIN when I was a kid. I do not enjoy having the dickens scared out of me. I'm still agog that GUEST was done in such a way that I didn't jump out of my skin. ;-)

I'm enjoying CROWNED CLOWN, too. Just haven't been commenting, what with a couple of recent finales and dramas carrying over from 2018 -- and total immersion in JUMONG.

Thank you @pakalanapikake and @wishfultoki for the responses. A pleasant surprise.
As usual @pakalanapikake you have given me plenty of home work.
So @wishfultoki you are going to give KINGDOM a pass. You draw the line at zombies. Not even 6 episodes? That is like a mini-series. I am not a zombie enthusiast but I will be watching KINGDOM.
I bookmarked the list of 2019 sageuks from here (12-14-18)(comment #16):
http://www.dramabeans.com/2018/12/woo-do-hwan-to-join-yang-se-jong-in-jtbcs-sageuk-my-country/
(I need a lesson on how to link individual comments.)

You're most welcome, @marcusnyc20 bong-soo! Sorry to add to your "homework" -- but at least we don't get graded here on DB. ;-)

It took me the longest time to figure the danged things out, and then a kind Beanie revealed the mystery.

To insert the URL for a post or a comment anywhere on DB, go to the header for the entry and:

1. Click on the three vertical dots to the right of the poster's name & date/time stamp.

3. Copy and paste the URL that the system generates.

4. Here's the permalink for your post above as an example:
http://www.dramabeans.com/2018/12/netflixs-kingdom-brings-terrifying-zombies-and-corrupt-palace-decadence/#comment-3392936

5. Permalinks from your fan wall look like this:
http://www.dramabeans.com/members/pakalanapikake/activity/700250/

Looks so amazing!!! I love all the cast and omg Signal writer!!! Why January 25 and not December 25... would've loved to marathon this with the entire family over the holidays. 😭

That poster. This cast! I hate zombies. Can't wait.

Ahhhh, lake zombies aren't scary. Especially if it's a cold lake, they'll be sluggish from the cold.

So will the humans! And zombies never tire! (Also, surprise zombies are the worst!)

True story: When I was a kid, after read a wildly age-inappropriate book, I was afraid to open my eyes under water while swimming in lakes because I didn't want to see a body. Weirdly, the thought of bodies in the lake didn't prevent me from swimming, I was just afraid to see them. Lake zombies will add to the fun.

The things I will watch for Kim Eun Hee. *facepalm. At least Joseon zombies is a fresh concept.

Ah, now I have to try this, even if I hate zombies.

Joo Ji Hoon in traditional grabs is just... *censored own thoughts* lol
with RSY, JJH and BDN pretty sure we are on a good ride~
my only gripe is why only 6 episodes...?
6 episodes are not enough for me to look at JJH...

joo ji hoon in anything is enough for me. he is what i will be watching for zombies or not.

I can't imagine Joseon will be the sea of zombie like in "Rampant"... :)

The trailers are already hyping me up and with such a killer writer and cast I'm all in 🙌 Who knew I'd wait for a zombie drama...

Could this be the sageuk I've been craving for so long? Please be good.

The aesthetics of Korean dramas and movies are really on another level....

Realised I'm too much of a scaredy-cat to watch this! Shame because I like the cast involved :)

Joo Ji hoon is enough reason for me to watch it. I will just skip the zombie scenes lol. He is still for me one of the most good looking Korean actors. And he is getting better and better. Sometimes I think he is like the Korean version of Keanu Reeves..

Goody, goody I just got my Netflix account back today.

Signal was awesome so really looking forward to this!

It took my brain a while to process that the nurse was Bae Doo-na. I always think of her with short hairdo and badass roles.
Nurses are badass so I guess that qualifies too :D

Too similar to Rampant but I will still watch it.