So, this is what happens on your balcony when you can’t get over CLOY…

Before watching episode 16 I had absolutely no clue you could grow edelweiss in a pot. I thought these delicate little flowers would exclusively grow on meadows at alpine heights. But after seeing Se-ri successfully raising her cute edelweiss I totally wanted to have one, too. When the drama ended, I did some research on the web and got three tiny baby plants. Kudos to Se-ri who kept patiently telling hers ten nice things every day. She must have done this for months, because edelweiss grow pretty slowly and are literally late bloomers. I gave up doing it quickly, because it felt just too bothersome. Nevertheless, they were raised with lots of love (for the drama). I’m still surprised they came out so beautifully. Their fluffy petals are just too adorable! 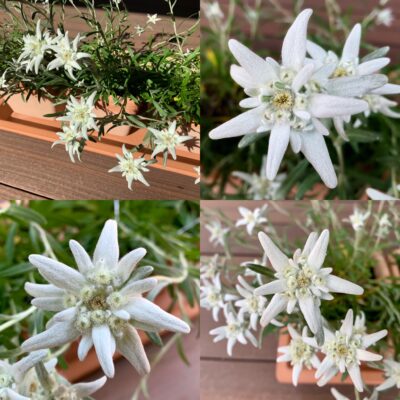 Love this! For me, it was buckwheat flowers after goblin. These are so pretty, well,done!

After graduation from university I didn’t really know what to do with my life. During my teenage years I had intensely studied classical music, later majored in literature and was crazy about theatre. So I decided to apply for an internship at the community theatre of the town where I just graduated. They called me immediately, telling me they urgently needed additional staff for upcoming projects, and I could start right away. Sooner than I expected I found myself preparing coffee for actors and directors, handling props and costumes, acting as stand-in, prompting during rehearsals, writing playbills and helping out as an assistant director. Though I hardly earned any money, I had the time of my life.

One of the rookie actors caught my eye. I was mesmerized not only by his exceptional talent, but also by his stunning looks. He was tall, his handsome face was surrounded by lovely curls, he had dreamy eyes and a sexy dimple in his chin. He was kind, caring and warm-hearted, always full of interesting, funny little stories he recited in his calm and soft voice. During numerous coffee breaks we became close. I was in love. Head over heels. One day he happily told me that he finally has a weekend free from rehearsals and performances coming up and will spend it with… his boyfriend.

When we eventually had to part ways, there were no words needed. His hug was enough to tell me “I love you, too. But, you know… I’m sorry.” The hug and the pain were staying with me for a long time.

Ten years later we met again. We both had traveled the world, worked hard on our careers, experienced the ups and downs of life. His curls started showing traces of gray and he had grown a beard over his dimple. The crush I once had on him turned into an ever-growing friendship which will hopefully last a lifetime. We both have busy schedules, but whenever I can find the time I will make it to one of his shows, usually followed by drinks and deep conversations till the wee hours of the morning. He became a source of inspiration, encouragement and healing for me. I try to give back by always supporting him and his projects.

I’m very grateful to have such an amazing person in my life.
Glad, to meet you again in Love, February, 내 배우.

What a lovely story, Willow.
Thank you for sharing.

Thank you for reading and commenting!

I don’t know why but Google results of “내 배우” turned out Lee Jae Wook & I’m not complaining.

Exactly! It’s a quote from Search: WWW. I liked how Lee Da Hee calls him lovingly “내 배우” in the drama. That’s so sweet! And Lee Jae Wook puppy is so adorable!

Beautiful story. Thank you for sharing it with us!

Can we have a kiss like this in Crash Landing, please? 🙏

Is there anybody else worrying about Captain Ri’s tomato plant? It looked so tender and fragile and with the weather being all cold, rainy and snowy during the last two episodes I honestly wonder if it will survive? Rooting for little tomato plant here! (yes, pun intended)

It was heartbreaking when he tried to save it. I hope it’s not dead yet. Hang in there, tomato plant!!